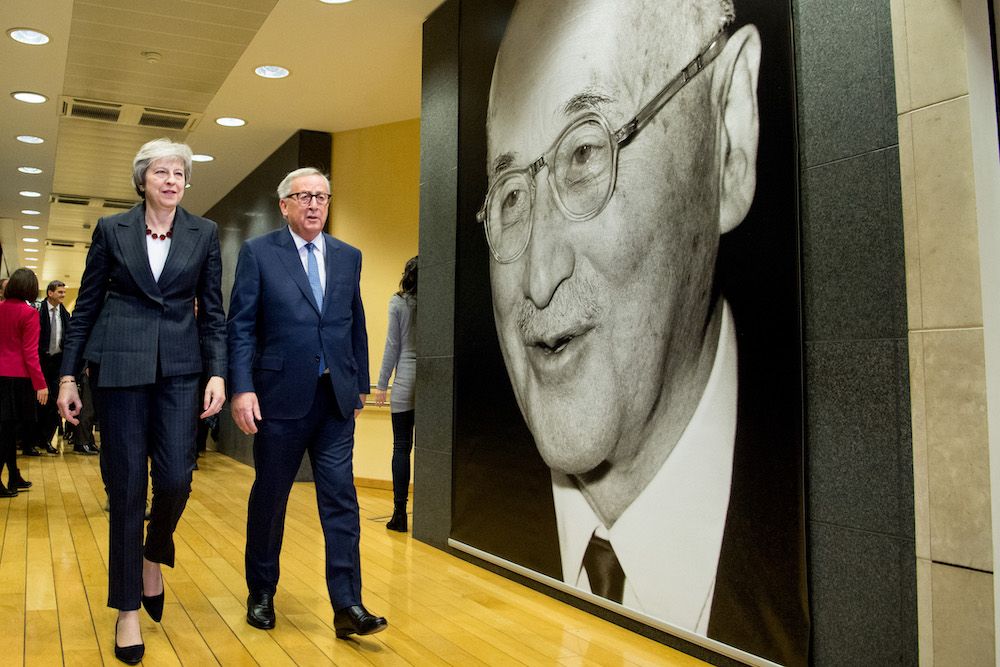 - Pound Sterling up on hopes for last-minute EU concessions

- May could fly to Strasbourg tonight

Pound Sterling was the best-performing major currency at the start of the new week amidst growing hopes of a last-gasp concession on Brexit from the EU that would allow the UK parliament to vote into law the EU-UK Brexit deal.

It has been confirmed that Prime Minister Thersa May is en route to Strasbourg where she will meet European Commission President Jean-Claude Juncker.

In a media briefing in Dublin, Simon Coveney, Ireland's foreign minister, said the aim of the trip would be "to try to finalise an agreement, if that’s possible."

It appears that markets are eyeing the May-Juncker meeting as being the point at which a last-minute offer from the EU will be made, an outcome that would be unequivocally bullish for Sterling.

"Certainly the case Number 10 have been increasingly seeing Juncker as the deal-maker here - EU 27 sources say meeting between the two for tonight not in the diary yet," says the BBC's Political Correspondent Laura Kuenssberg who says May and Juncker had spoken earlier today.

Kuenssberg reports there will be statement in Strasbourg at 9pm, as well as in the House of Commons.

Leading Brexiteer Ian Duncan Smith says he believes negotiations are "reaching a point where there might be agreement and he will "keep an open mind" about whether Brexiteers can support it.

Judging by the British Pound's advance, the sentiment barometer appears to be a little more positive than had been the case earlier in the day with markets sensing there could be the kind of concessions on offer from the EU that could help the Prime Minister get her Brexit deal passed in the House of Commons on Tuesday: 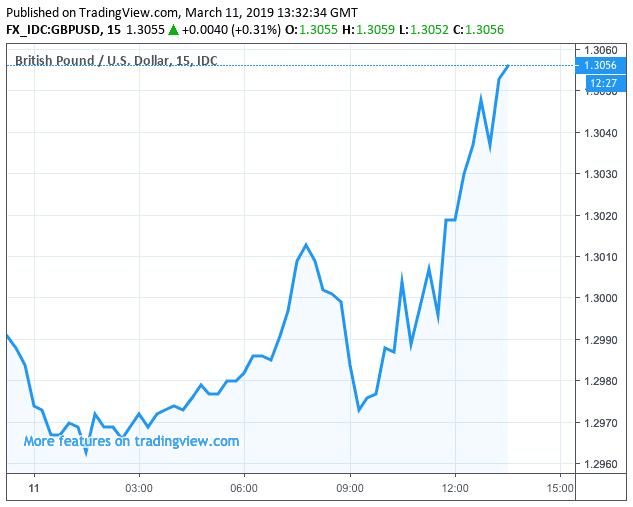 Above: GBP/USD is decidely higher following a shaky start to the day.

The sentiment barometer had swung into negative territory over recent days amidst numerous reports suggesting the EU-UK Brexit deal is set for a significant defeat, of a scale that means there is little chance of it ever proceeding into law, all but guaranteeing a Brexit extension will be requested by the UK.

One major national paper reports today Senior Conservative MPs have told Theresa May that her position will be untenable if parliament forces her to extend the Article 50 process this week.

Another report suggests the government might scrap the vote altogether amidst a lack of last-minute concessions from the EU.

If the vote does proceed, as is still widely accepted, and it is defeated, as is widely expected, MPs will then be allowed to vote on whether or not to leave with 'no deal'.

MP's passing a 'no deal' motion is unlikely according to parliamentary arithmetic. MPs will therefore likely vote on Thursday on whether or not to instruct the government to ask for a delay to Brexit, which is widely expected to pass.

"In a series of meetings with government whips, Brexiteer Tories have warned Downing Street that the prime minister will face renewed pressure to quit if she is made to ask for extra time from Brussels," reports Oliver Wright, Policy Editor at The Times.

Others have reportedly suggested that they would be prepared to compromise and back her deal if she wins limited concessions but only if she states her intention to go as soon as the deal is signed.

"A former cabinet minister said that Mrs May would find it “very difficult” to stay in office if parliament forced an extension on her," adds Wright.

The prospect of a Prime Ministerial resignation is not one that Sterling enjoys as currencies tend to perform poorly during times of political uncertainty. Should May quit the prospect of a General Election will rise sharply, and we would expect the Pound to underperform until the outcome of this election is known.

"If Theresa May loses Tuesday’s vote with a sizeable margin (more than 100), chances are that she’ll call an early election; either immediately, or – more likely – at the end of the month to create the narrative that she really has been left with no alternative," says Erik F. Nielsen, Global Head of CIB Research and Group Chief Economist at UniCredit in London.

May has previously committed to not leading the Conservative party into its next election, and we would therefore expect an election to be fought by a new leader.

With the Conservative party membership heavily in favour of a more robust stance towards Europe than displayed by its current PM, we would expect a more 'Eurosceptic' leader to take the reins.

This in turn greatly raises the prospects of a 'no deal' Brexit at some point in 2019 we believe.

We could still however see Sterling end the week higher if the EU come to the table with some last-minute concessions which could minimise the scale of the PM's defeat on Tuesday.

"If Theresa May loses Tuesday’s vote with a relatively small number (say by 50-100 votes), then we go through Wednesday’s and Thursday’s votes, as outlined above, Art 50 gets extended, and May then tries a third time in the last week of March, at which stage the pro-Brexit Conservative MPs back down, and Theresa May’s Brexit deal passes," says Nielsen.