- As fears over outcome of December 11 Brexit votes in parliament weigh.

- Rejection to send GBPUSD to 1.20, GBPEUR toward parity says MUFG.

The Pound underperformed rivals Monday even after November's IHS Markit manufacturing PMI surprised on the upside, as concerns about the latest developments in the Brexit saga weighed on the British currency.

November's manufacturing PMI came in at 53.1, up from 51.1 previously and far ahead of the consensus for a reading of 51.6.

That draws a line under October's steep fall from 53.6 although economists still say the sector will contribute little to growth during the final quarter.

"The manufacturing sector still appears to be on course to slow in Q4, despite the PMI’s recovery in November. The average level of the output balance in October and November, 52.1, is consistent on past form with output merely holding steady in Q4, having risen by 0.6% quarter-on-quarter in Q3. Somewhat surprisingly, demand is holding up better at home than overseas," says Samuel Tombs, chief UK economist at Pantheon Macroeconomics.

Manufacturing output rose during the November month thanks to robust domestic demand, but export orders fell for a second consecutive month.

Companies blamed a general downturn in foreign demand for their goods and "Brexit uncertainties" for the poor export performance. Only the consumer goods sector saw a rebound in new export orders.

"While it is clear that weak foreign demand is weighing on manufacturing output, it seems solid domestic demand should prevent the sector dragging on economic growth too much in Q4," says Andrew Wishart, a UK economist at Capital Economics.

Markets care about the data because it is an important indicator of momentum within the economy. And economic growth has direct bearing on consumer price pressures, which dictate where interest rates will go next. 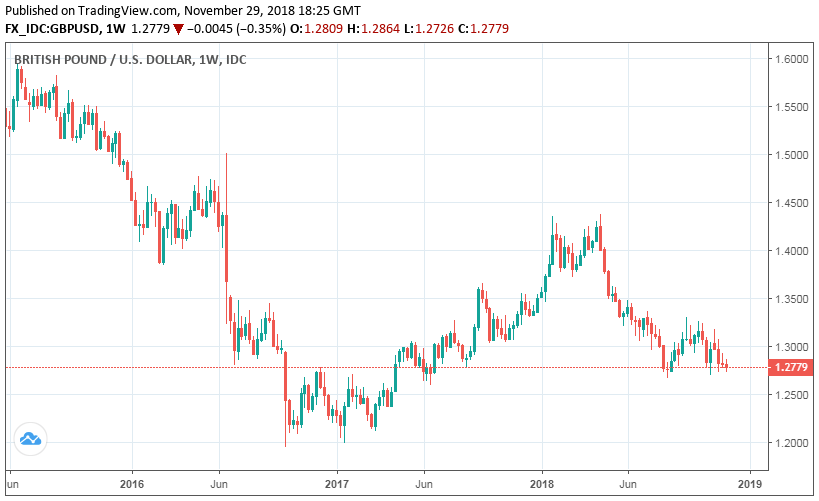 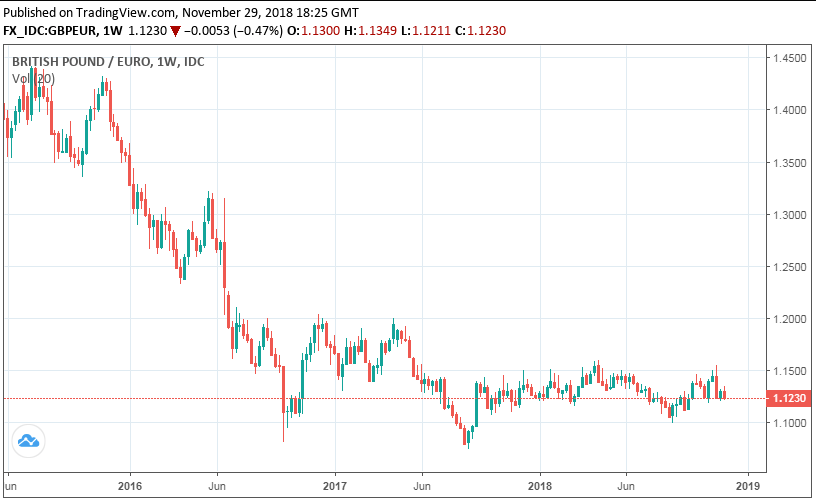 Sterling's gain over a rapidly weakening Dollar is the smallest of any G10 currency barring the Japanese Yen and Swiss Franc, which are both so-called safe havens that have been dented by a recovery of risk appetite in the wake of the "trade war" detente announced at the weekend's G20 summit.

The Pound is underperforming at the beginning of the new week due to ongoing concerns over the latest developments in the Brexit saga. These are leading markets to ignore positive economic data emerging from the UK.

PM May will see her Withdrawal Agreement and accompanying political declaration debated in parliament next week ahead of a series of votes that commence on December 11, which are crucial to Pound Sterling.

Lawmakers on all sides of the House of Commons have pledged to vote against the Prime Minister's Brexit proposals, for a variety of reasons. The PM is currently expected to lose the vote.

This would almost certainly see markets fret that a so-called no deal Brexit is becoming ever more likely. Some analysts say this could have significant adverse consequences for the British currency. 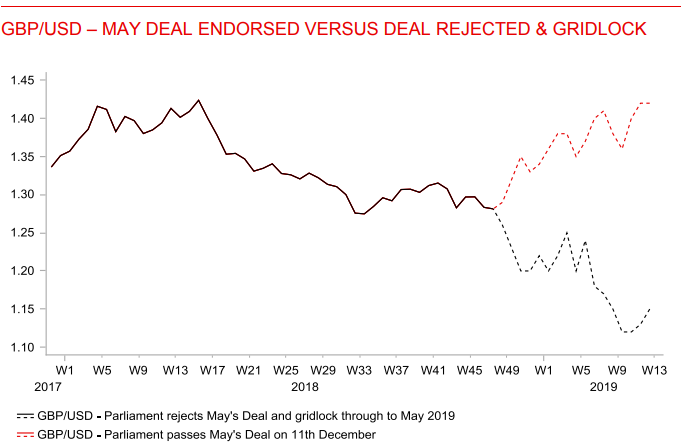 Above: MUFG scenarios for Pound-to-Dollr rate from December 2018 onward.

"Based on a failed parliamentary vote, and assuming spot then is trading around today’s level we would expect GBP/USD to drop quickly toward the 1.2000 level. Our year-end GBP/USD forecast on a failed parliamentary vote is 1.2200," says Derek Halpenny, European head of markets research at MUFG. "For the pound versus the euro there would be a notable difference too but the range perhaps a little less given EUR/USD would be impacted to some degree."

However, these moves would be just the beginning of a protracted period of depreciation for the Pound, that would push up inflation once again and reduce real GDP growth in the process. Exactly as the earlier depreciation did in the wake of the 2016 vote to leave the EU.