- Morgan Stanley, Bank of America bet on further losses ahead.

The Euro-to-Dollar exchange rate has extended losses into the new week as the US greenback continues a riposte against its international rivals that has left even the most bullish forecasters eyeing a key line of support that remains the last line of defence between the Euro and fresh six month lows.

Europe's single currency now trades at a 2018 year-to-date loss against the Dollar after a crushing onslaught by the greenback drove the world's most widely traded currency pair down more than 3% during the month to May 08.

This saw EUR/USD break below the crucial 1.2150 line of support that had held firm in the face of repeated challenges over a four month period. Now strategists are eyeing the 1.1850 level as the last bulwark against a downward move that might push the exchange rate back into the 1.16 area, where it has not been since early December 2017.

Strategists are divided in their opinions over what might happen next although it is conspicuous that even some the most bullish forecasters have noted that, at best, the EUR/USD rate could remain trapped in the 1.18-1.20 range over the short term.

"We’re not big fans of this EUR/USD correction extending to the 1.17 area - but will need to see more encouraging data from the Eurozone and also the Fed credibly arguing that every tick higher in US inflation will not trigger an automatic policy response," says Chris Turner, head of foreign exchange strategy at ING Group. "We see EUR/USD in a 1.1880-1.2000 range near term, but this is not a high conviction view." 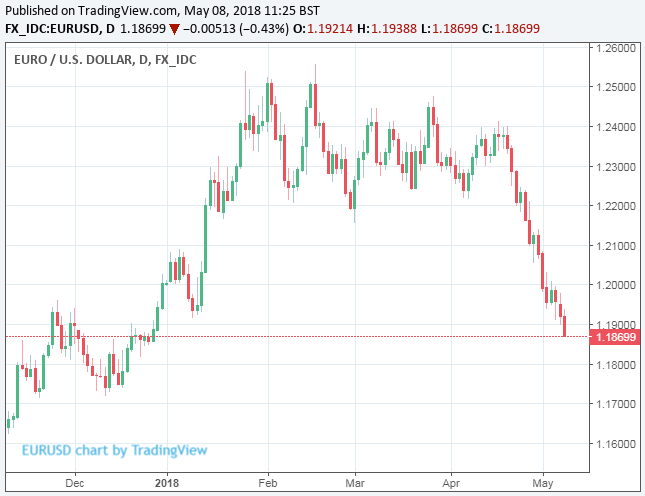 A widening gulf between US and European bond yields has hit the EUR/USD rate hard in the second quarter as markets have renewed their focus on relative interest rates, at a time when Eurozone economic indicators have come off the boil and the US indicators have continued to point toward a relatively firm economy.

PMI surveys of the Eurozone services and manufacturing industries have turned lower this year and continental inflation has also decelerated, leading some to fear efforts by the European Central Bank to wind down its quantitative easing programme may be stymied later this year.

Conversely, US inflation has risen above the 2% target, the unemployment rate has fallen close to a 20 year low and the ISM manufacturing and services PMIs still point toward decent levels of ongoing growth. So much so that some economists are still pushing the idea that the Federal Reserve may go for four interest rate rises in 2018 rather than the three already priced-in by markets.

"We’ve been saying that a lot of the dollar out-performance over recent weeks has been driven by US out-performance of both growth and rates. Yet we doubt this divergence with the Rest of the World will last. Encouragingly German IP has bounced back in March, suggesting February’s weakness was strike/weather related," Turner writes, in a morning briefing.

Turner and the ING team were among the first to call the EUR/USD rally of 2017 and have a year-end forecast of 1.30 for the exchange rate in 2018. They are not alone either as many other forecasters still hold bullish targets for the Euro this year and some are also sceptical of the idea that the currency's current weakness can continue for much longer.

"The key question over the next two weeks is whether the EUR could hold key support around 1.1850 or if it is headed to 1.16. We expect the former, holding our expectations of a break of 1.30 into 2019," says Mark McCormick, North American head of FX strategy at TD Securities. 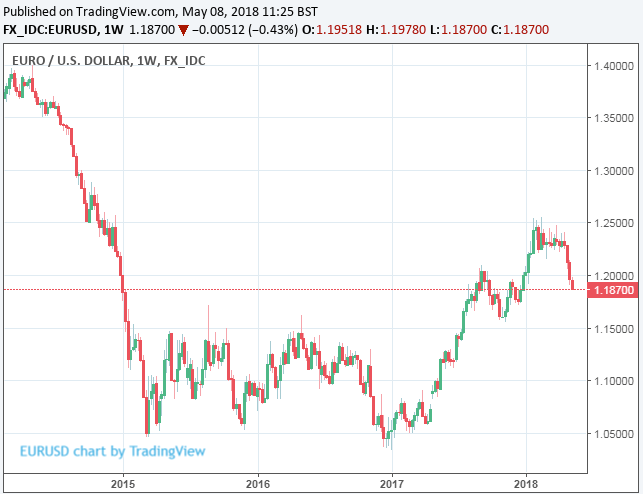 McCormick concedes that Transatlantic divergences in inflation may hang in the air above the Euro for a while longer, keeping the single currency under pressure, but says this should prove to be a temporary phemomenon. Not least because the Federal Reserve said last week it may allow US inflation to run above the 2% target for a period of time.

This will have the effect of reducing America's "real interest rate" and will also reduce the bond yield differential that has underpinned the US Dollar throughout much of April and early May, offering some relief to the EUR/USD rate.

"Bearish momentum on daily chart remains intact but shows tentative signs of waning while stochastics is showing signs of rising from oversold conditions. Technical continues to suggest chance of rebound at some stage," says Saktiandi Supaat, an FX strategist at Maybank, in Singapore. "Bias remains to buy dips. Immediate resistance at 1.2020 – 40 before 1.2140 levels."

The ING fx team, McCormick at TD Securities and Maybank's Supaat are among the vanguard of EUR/USD bulls who see the single currency prevailing over its North American rival during the second quarter. However, they are facing off against a lineup of strong voices who are only too happy to bet against the EUR/USD rate for the foreseeable future.

"We expect further weakening of EUR/USD in the months ahead, as we see US data improving further on the back of the fiscal stimulus, Fed hiking consistently with the dot plot, and US companies repatriating profits following the tax reform," says Athanasios Vamvakidis, an FX strategist at Bank of America Merrill Lynch, in a recent note.

Vamvakidis and the BAML team have advocated that clients begin betting the EUR/USD rate undergoes another sharp fall over the second quarter and are targeting a move all the way back down to 1.15. This would be the lowest level for the exchange rate since July 2017. They are not alone either.

"The broader trend of USD strength should continue, particularly against low yielding currencies. Continued divergence between US and European macro data should keep EURUSD trading lower," says Hans Redeker, head of G10 FX strategy at Morgan Stanley. "Positioning in EUR remains long, suggesting more room for a pullback. President Draghi noted that the downside risks to the macro outlook had increased, and that the ECB would be monitoring the data closely."

Redeker and the Morgan Stanley FX team have said a continued deceleration of Eurozone economic momentum would make a strong Euro even less tolerable to the ECB than it already is and that recent price action means there is a danger the exchange rate drops as low as 1.1600 during the months ahead.

Only time will tell which of these voices is right. For now, the EUR/USD rate remains under pressure. The pair was quoted 0.49% lower at 1.1973 during the morning session Tuesday.