-Analysts diverge on how to exploit weakness in single currency.

The Euro-to-Dollar rate has fallen to a five-month low at the start of the new month, thanks to a resurgent greenback and a series of disappointing economic numbers from the old continent, but strategists at two of the world's largest investment banks are saying there could be even further losses just around the corner.

Europe's single currency now trades at a year-to-date loss relative to the US Dollar after having unwound a near-5% gain during the three months to the beginning of May and, although they have different ideas around how to profit from it, strategists at both Morgan Stanley and Credit Suisse have suggested this downward move will continue for a while yet.

Divergence between Europe and the US, both in terms of economic growth and monetary policy, has been the primary driver behind the Euro's reversal of fortune and is the biggest theme for currency markets in the second quarter.

"The risk is that USD strength runs a bit longer. Even the slightest change in FOMC wording today to acknowledge more clearly a rising inflation trend would be sufficient to boost the central bank divergence argument still further," says Shahab Jalinoos, an FX strategist at Credit Suisse. "Especially as Friday's employment data give the market another potential data point to focus on in terms of April's average earnings number."

This comes after a superior economic performance from the US prompted markets to begin flirting with the possibility of four 2018 rate hikes from the Federal Reserve rather than three. In addition, President Trump's budget-busting tax reforms have got US Treasury Bill issuance on the up, which has driven bond yields higher and helped perk up the Dollar.

Meanwhile, Eurozone inflation has dipped lower again in recent months while other economic indicators have come off the boil too, pointing to slower growth ahead. Incidentally, Eurostat data released Wednesday showed GDP growth slowing to 0.4% in the first quarter, down from the 0.7% seen at the end of 2017.

In addition, the European Central Bank has recently become more vocal about its concerns over "currency strength" and some economists are now speculating it could be year-end before the central bank's quantitative easing program is finally wound down.

"EURUSD's downturn in the past 2 weeks has been swift and decisive, taking the pair from highs near 1.24 to test below 1.20 and threaten a breach of the 2018 low of 1.1937 set on 9 January," Jalinoos adds. "Relative growth data, positioning and a swing back towards the divergence trade: recent European (including UK) output data dramatically undershot expectations, even as US numbers remained robust." 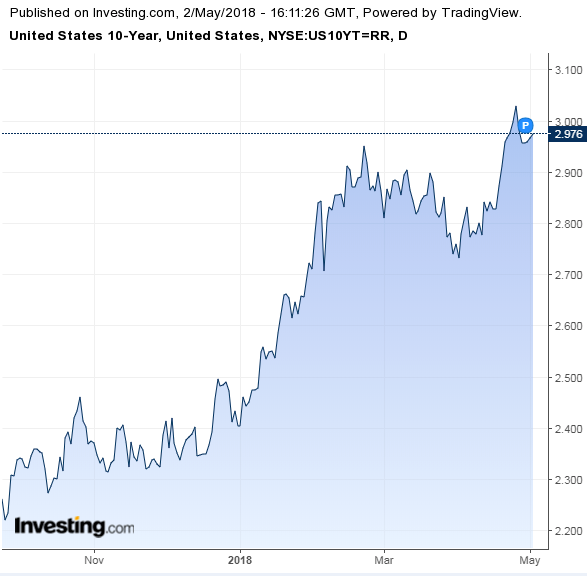 The net effect of all this has been to send American 10 year bond yields to multi-year highs above the 3% threshold while German yields have fallen from three-year highs of 0.76% at the start of the year to just 0.57% in the first week of May, at a time when the currency market has refocused on interest rate differentials. 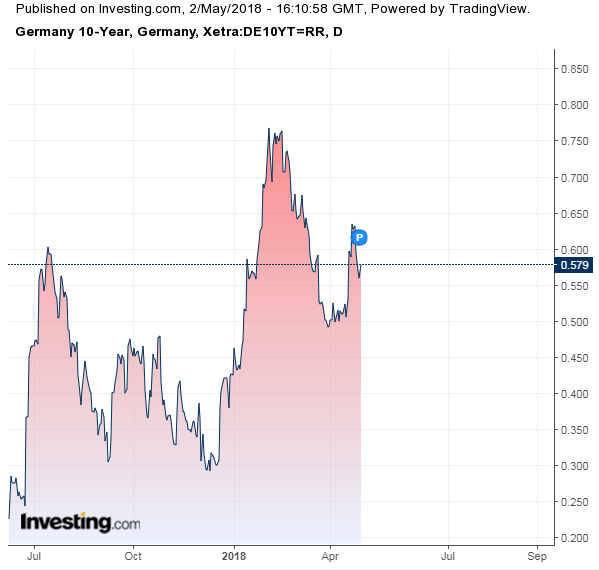 This divergent yield story may enter a new chapter Wednesday evening when the Federal Reserve releases its latest monetary policy statement, particularly if there are references to an improved outlook for inflation or the economy more generally. Currency markets will be watching closely.

"While it's definitely the case that the market consensus has shifted materially in favour of a more USD-bullish outlook, the move has been fast enough to presumably mean there are still USD buyers out there who have been squeezed and will be ready to pounce on retracements. And with the market still pricing in less than 2 1/2 more hikes Fed hikes this year relative to the Credit Suisse view of 3 more, there is more work to be done potentially on the rate divergence side," Jalinoos writes, in a note Wednesday.

Still, Jalinoos and the Credit Suisse FX team are suspicious of the current US Dollar rally, and recent fall in EUR/USD rate, so rather than chasing it further they are waiting to see how it develops over coming days.

They cite the 1.1937 level of EUR/USD, which marks the January 2018 low, as a pivotal point for the exchange rate and will decide whether or not to "fade the USD rally" after seeing how the market responds to an initial test of this threshold. 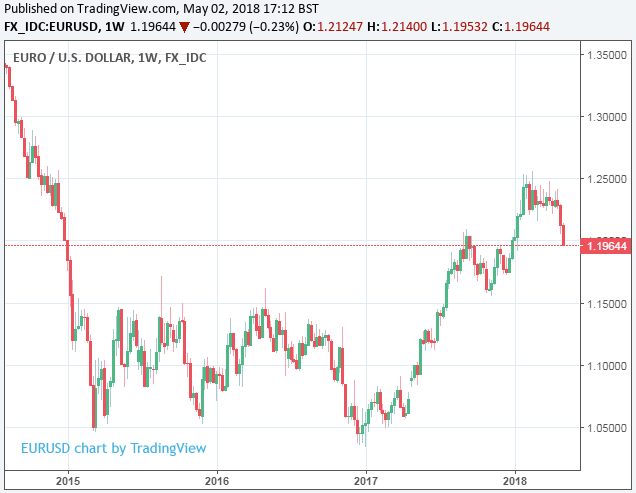 The EUR/USD rate was quoted as low as 1.1952 Wednesday after breaking decisively below 1.20, suggesting Jalinoos was right to be cautious about buying the single currency right away. Other strategists have thrown caution to the wind but are instead betting on a further decline.

"The broader trend of USD strength should continue, particularly against low yielding currencies. Continued divergence between US and European macro data should keep EURUSD trading lower," says Hans Redeker, head of G10 FX strategy at Morgan Stanley. "Positioning in EUR remains long, suggesting more room for a pullback. President Draghi noted that the downside risks to the macro outlook had increased, and that the ECB would be monitoring the data closely."

Redeker and the Morgan Stanley FX team have said a continued deceleration of Eurozone economic momentum would make a strong Euro even less tolerable to the ECB than it already is and that recent price action means there is a danger the exchange rate drops as low as 1.1600 during the months ahead.

They have advocated that clients bet on a fall to this level and entered "short" trades themselves around the 1.21 level at the end of last month, with stop losses set at 1.2420 and targets at 1.1600.