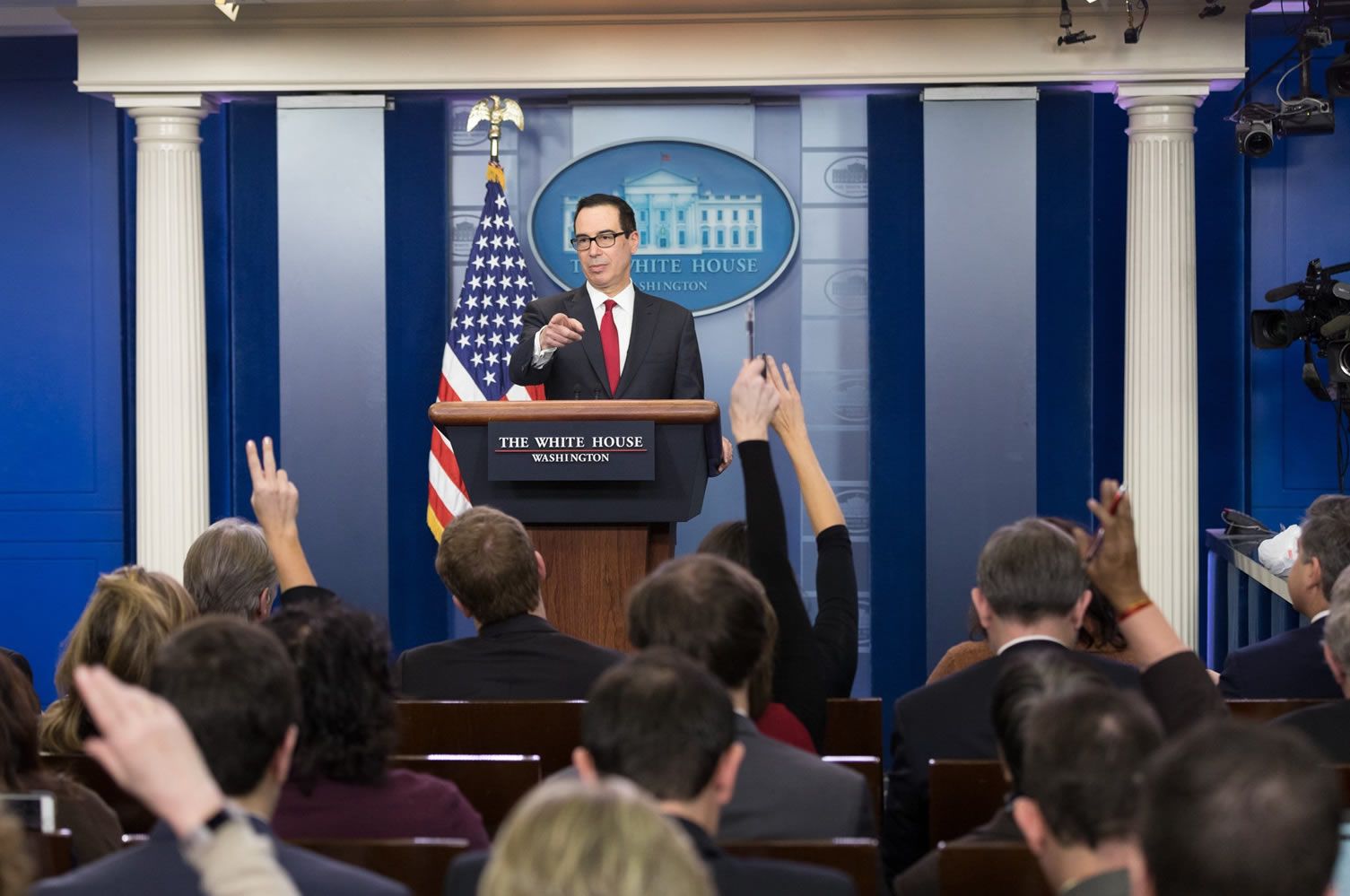 Above: US Secretary of the Treasury, Steve Mnuchin sent the Dollar lower on comments concerning its value. © The White House

The US Dollar declined extended after the Treasury secretary suggested authorities were adopting a weak Dollar stance.

The Pound has recovered to levels seen before the crash that followed the UK's decision to vote to leave the European Union with the Pound-to-Dollar exchange rate achieving a best of 1.4241 on Wednesday, January 24.

The move higher was largely the result of another bout of significant selling and the Euro also profited with the EUR/USD hitting a high of 1.2402 - its highest level since 2014.

The US Dollar fell on comments from US Secretary of the Treasury, Steve Mnuchin, who said he favoured a weak Dollar to support US exports, at the World Economic Forum in Davos.

He told delegates in Davos that the Dollar's decline was good for the US economy:

"Obviously a weaker Dollar is good for us as it relates to trade and opportunities. But again I think longer term the strength of the Dollar is a reflection of the strength of the U.S. economy and the fact that it is and will continue to be the primary currency in terms of the reserve currency."

Analyst Joe Manimbo with Western Union says the tone of the remarks served as a compelling sell signal for the U.S. currency which plunged through key supports. "The remarks caught the dollar at a particularly vulnerable time, as the world economy strengthens and steers investment away from the U.S."

Oops! #Euro jumps to highest level since 2014 as US FinMin Mnuchin talks the Dollar down. Says weaker USD good for US due to trade opportunities at BBG TV in Davos. #WEF18 pic.twitter.com/Q0lBhY04nX

Currency markets latched onto the comments as confirmation that the Trump administration would actively seek out and encourage a lower Dollar.

Whether the US administration's attempts at fostering further Dollar weakness will be effective is an entirely different matter and the decline might be a knee-jerk reaction. Whatever the case, the decline has aided the likes of the Euro and Pound which are currently enjoying a strong uptrend against the under-pressure Greenback.

"Government shutdowns, Brexit negotiations, eurozone PMI figures, UK unemployment. All these are as nothing compared to what the US Dollar does. At present it is not so much the ‘almighty Dollar’ as the ‘powerless Dollar’, with the weakness in the currency coming as a reminder that, just as equity markets can keep going up, a currency can keep falling. The turnaround in the Pound has been astounding, confounding all expectations, as today sees the price topping $1.41 for the first time since the Brexit vote," says Chris Beauchamp, Chief Market Analyst with IG.

Indeed, that GBP/USD powered through 1.40, 1.41 and then 1.42 has caught many in the analyst community by surprise but Sterling sentiment was aided earlier in the day by latest jobs market data from the ONS which showed a surprising surge in the number of jobs created in the three months to November 2017. 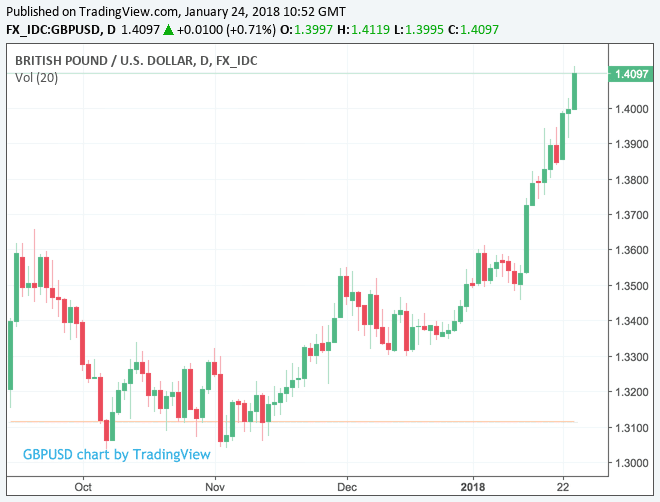 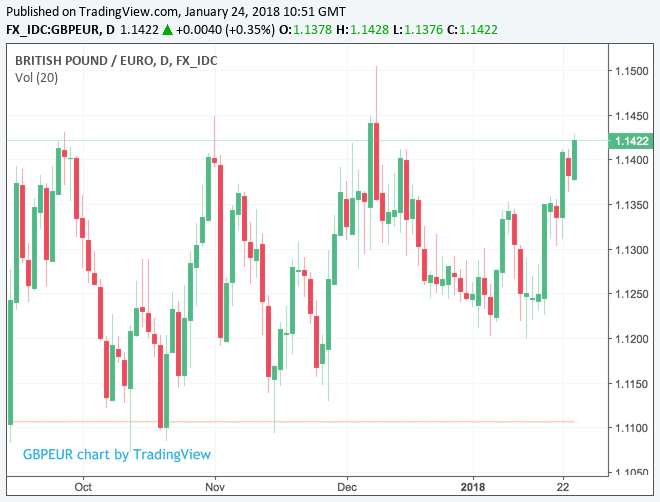 It's not the first time Mnuchin has said a weak Dollar would be good for trade, he said the same thing earlier in August 2017, in an interview with CNBC - at that time he added the proviso that in the long-term a stronger Dollar would reflect continued confidence in the US economy and the currency's status as a reserve currency, a view he reiterated in Davos.

Trump's 'America First' agenda would be supported by a weaker Dollar as it would make US exports relatively more price competitive and foreign more expensive and less competitive.

And there are suggestsions that the protectionist trade policy adopted by the US administration is liable to reinforce the weaker Dollar.

"The extended selloff of the buck is likely a reflection of the introduction of tariffs and other drama in Washington; history shows that the FX market does not respond kindly to acts of protectionism, which reinforces our expectations of the steady unwind of the Dollar bull market," says Mark McCormick, North American Head of FX Strategy with TD Securities in Toronto.

The USA this week slapped eye-watering tariffs on the imports of solar panels and washing machines in order to protect domestic manufacturers.

In 2017 the country slapped a 300% import tariff on Bombardier aircraft, a move that threatens jobs in both Canada and the United Kingdom with many analysts expecting more to come, particularly with NAFTA negotiations under way. There is a real threat the trade agreement between the US, Mexico and Canada will soon break down, taking the world deeper into protectionism.

But has the Dollar's Sell-Off Gone too Far Now?

Looking ahead, there are suggestions that the Dollar's period of weakness is looking overdone and a relief-style rally might be in order.

"I would start to be on the lookout for a US Dollar recovery in the sessions ahead. The US administration's soft Dollar policy rhetoric is ramping up and it could run into pushback. Tomorrow's ECB could be a place where we see Draghi leaning dovish because of the currency wars," says analyst Joel Kruger of LMAX Exchange. with one eye on the impending European Central Bank meeting.

While Kruger sees short-term risks of a Dollar rebound, analysts at Bank of America Merrill Lynch reckon the longer-term prospects of the Dollar are brighter than markets are currently assuming.

"We continue to think the market is ignoring USD upside risks in the first half of the year, while simultaneously over-emphasising the positive and well-priced ECB "normalisation" story," says Kamal Sharma at Bank of America Merrill Lynch's London office.

BofAML believe markets are under appreciating the boost to growth Trump's tax changes will bring and they think this will drive up growth and lead the Fed to raise interest rates more aggressively than expected, and higher interest rates are a major FX driver of inflows from international investors seeking the highest returns.

As a result of the fiscal shot in the arm from increased inflows BofA forecast the Dollar to rebound substantially versus the Euro and as a consequence for EUR/USD to weaken to 1.1500 in H1 from its current level of 1.2230.

The stronger Dollar will also be felt by the Pound with BofA saying the Pound-to-Dollar exchange rate will fall back to 1.26 by March 2018 ahead of a recovery to 1.34 by mid-year.