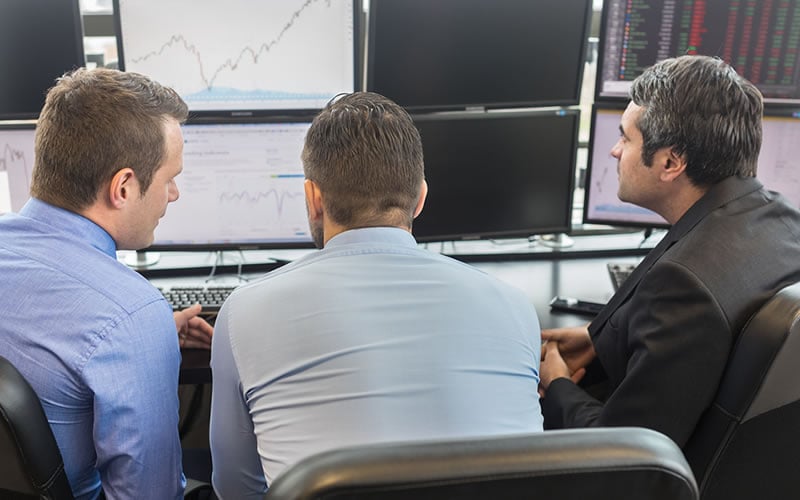 The Euro to Dollar exchange rate (EUR/USD) hit a fresh high over the past 24 hours having achieved 1.1913 in late North American trade on August 2.

The gains have unwound somewhat, but the rally remains intact on most measures.

I say most measures, because of course there are those who believe the exchange rate is looking to pricey, and that it has risen too far, too fast.

The rises have seen a number of analysts upgrade their Euro forecasts of late, and we note the round number of 1.20 is a popular target.

However, this level is only forecast to be reached at the end of 2017.

So there certainly is some widespread unease over what Kit Juckes at Societe Generale describes as a “typical summer overshoot” in EUR/USD.

Jane Foley at Rabobank announced this week that she is lifting her EUR/USD forecasts but reckons that 1.20 could form the roof of a new range and suggests a long period of sideways trading might now lie ahead.

Expanding on the idea that the Euro is now too expensive relative to the US Dollar is Shahab Jalinoos at Credit Suisse who lays out five reasons as to why we might expect the Euro to cool down.

1) Earnings momentum is starting to slow down in Europe

Credit Suisse’s global equity strategy team argues that the percentage of companies in the Stoxx 600 index reporting net positive earnings surprises has fallen to a 4-quarter low in Q2 17, in concomitance with the strengthening of the EUR. 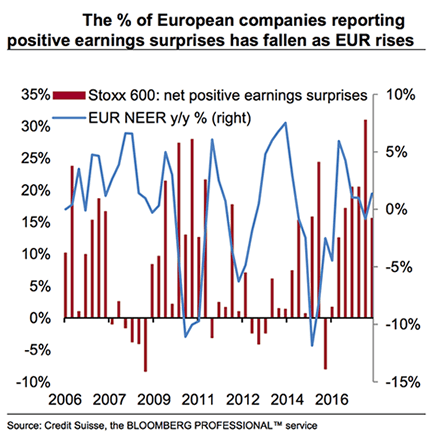 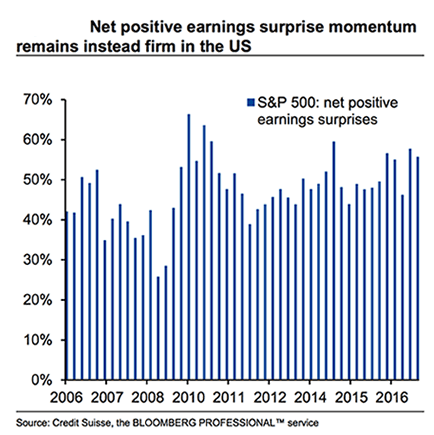 “On the margin we view this as a bit of a damper for EUR strength, as portfolio inflows into European equities might be negatively affected going forward by the more subdued tone of earnings,” says Jalinoos.

Too many traders are now invested in the ‘buy Euro’ trade - often when such crowding happens momentum fades as fresh entrants in the trade become scarce.

And when profits are taken, the trend can reverse.

CFTC data now showing the speculative accounts’ EUR balance at the highest level since 2014 while EURUSD risk reversal skews now bid for calls over puts for the
first time in almost a decade. 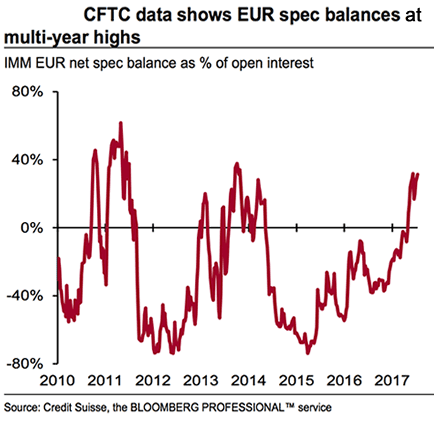 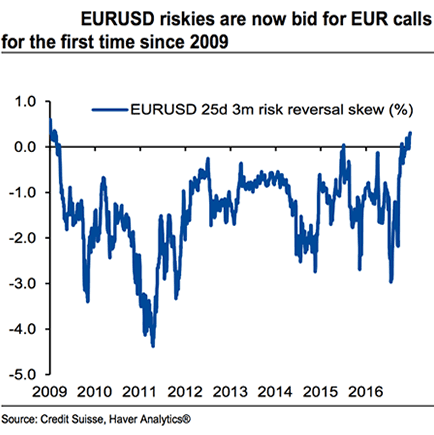 “We think the bar for further EUR strength from current levels is likely to be considerably higher. We remain of the view that the underlying picture remains supportive for the reasons we highlighted last week, in line with our 12m forecast of 1.22. This said, we think the rapid emergence of a consensus long EURUSD position argues in favor, if anything, of a slowdown in the pace of the upward move,” says Jalinoos.

Credit Suisse economists highlight how the recent upturn in economic activity has started to create short-term bottlenecks, especially on the employment front.

“While this in theory could result in rising inflationary pressures, the data still does not provide convincing evidence on this front,” says Jalinoos.

Credit Suisse see a risk that rising resistance by G10 central banks to USD weakness might drive expectations of a similar dynamic gaining prominence at the ECB.

Credit Suisse say the Bank of England is also a factor that limits our near-term EUR bullishness beyond their forecasts (we have a 3m 0.90 target for EURGBP).

Markets will likely focus on the vote count, after the most recent meeting on 15 June featured a hawkish surprise on this front, with three MPC members (Saunders, McCafferty and Forbes) voting for a rate hike, against five remaining members voting for an unchanged outcome.

Many in the market believe the vote composition will revert back to 6-2, but Credit Suisse are wary of a 5-3 vote tally as the Bank sends a signal that it wants a stronger Pound to help quell some of the UK’s imported inflation.

We cover this point in further detail here.

So while momentum studies are certainly advocating for further gains, keep in mind that scepticism of this Euro strength is in strong supply.

A Euro retracement is certainly likely, but as always the question mark remains over the timing of such a move.