The outlook for the euro exchange rate ultimately rests with how agressive on policy the European Central Bank gets on persistently low inflationary levels.

Not only could they expand purchases but they could cut interest rates once more should the euro exchange rate complex fail to devalue adequately in response to any expansion in the asset purchase programme.

The ECB has room to play with - Eurozone inflation remains well below the level targeted by the ECB and with labour market slack exceeding that of the US and UK any dangers posed by inflation appear remote.

The ECB’s mandate is to ensure inflation lingers just below the 2% line – as we can see in the graphic below the inflation rate remains under the level of August 2014, when ECB President Mario Draghi first flagged the prospect of euro area quantitative easing (a loose term for the asset purchase programme): 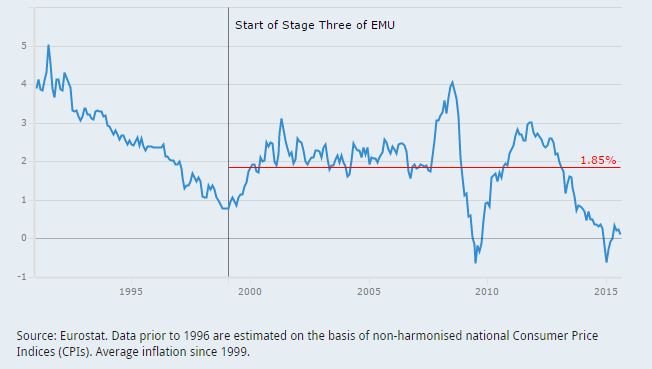 The ECB’s projections are also factoring inflation well below the 2% target in one year’s time suggesting there is no lingering threat of an overshoot to the inflation mandate.

This, combined with sluggish Eurozone growth, confirm there is little economic justification to avoid expanding the stimulatory regime at the central bank suggest analysts at Barclays in their latest global outlook publication.

“The fact that inflation expectations have returned to such low levels even after the announcement and implementation of the ECB’s QE program is a policy problem for the ECB that will, we think, result in an extension of the existing program before year-end,” says Ajay Rajadhyaksha, Head of Macro Research at Barclays.

Barclays are however aware that, unlike in the past, it is unclear how aggressively central bankers will be inclined to respond.

The debate over whether the ECB would step up its fight to raise inflation levels rose notably over the course of the week past - we have seen a number of members of the executive board talk up the prospects of additional stimulus at the ECB. Markets have seen this as a starting gun to further action.

As the tempo rose the euro exchange rate complex fell as traders grew nervous that ECB President Draghi would drop a bombshell at his appearance at the ECON hearing in Brussels on Wednesday the 24th.

Draghi merely reserved the right to act at a point sometime in the future saying:

“The inflation rate will remain close to zero in the very near term, before rising again towards the end of the year. It will take somewhat longer than previously anticipated for it to converge back to and stabilise around levels that we consider sufficiently close to 2%.

“Slowing growth in emerging market economies, a stronger euro and the fall in oil prices and in commodity prices more generally are the main causes for these developments. As a result, renewed downside risks to the outlook for growth and inflation have emerged.”

The ECB Will Act Soon

According to Barclays’ Rajadhyaksha the ECB will act before the end of the year noting that there is enough labour market slack, and euro area inflation is low enough to warrant an extension to QE by six more months, to March 2017.

Barclays warn that an announcement is likely in October.

As the Fed and BoE delay their first hikes, we believe the ECB and BoJ are likely to add to their QE measures.

This divergence in policy will inevitably create downside pressure on both the euro / dollar and euro / pound sterling exchange rates.

Not only will the ECB expand its QE programme, it may also take the entirely unexpected decision to cut interest rates even further.

“Although the ECB seems reluctant to reduce the deposit rate further into negative territory, we believe it would probably be the most effective way to depreciate the euro further. Thus, we would not rule out such a step in a worse-case scenario,” says Rajadhyaksha.

Barclays say it is unlikely that a mere extension of the existing ECB asset purchase programme would trigger similarly aggressive moves this time.

“However, depending on the exchange rate reactions, additional steps by these central banks cannot be ruled out,” says Rajadhyaksha.