The dollar rally was relentless over the final trading day of the previous week as short traders pushed the EUR-USD below the 1.0600 level.

“The EUR/USD has now dropped four big figures this week as yield between EU and US continue to widen and capital flows move to this side of the Atlantic,” says Boris Schlossberg from BK Asset Management.

The question at the start of the new week is whether the current selling pressure will be halted by bargain hunters looking to pick up cheap euros.

On Monday morning in London we see the EUR-USD trading 0.37 pct lower than at Friday's close having reached 1.0563.

As we enter the mid-month session we explore whether the recent weakness in the shared currency will continue.

When understanding the euro-dollar’s recent bout of weakness it is important to focus on the USD side of the equation.

The single biggest reason for the recent decline in the euro against the US dollar has been a shift in the currency market's pricing of an expected June interest rate hike by the US Federal Reserve.

At the start of April, after a poor job data report and a series of lacklustre economic reports, the prospect of a June rate hike appeared minimal and the Greenback was sold accordingly.

This allowed the EUR-USD to recover back above the 1.10 region.

As we can see below, the US dollar index stalled in March as economic data eased back, we await a decisive break higher at this stage. The dollar index is a basket of the largest USD pairings which, when combined, give us a reading of how the dollar is faring. 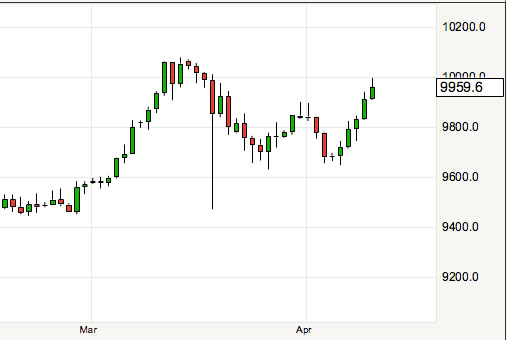 Beware, all FX quotes in this piece reference the wholesale markets rates - your bank will affix a discretionary spread to this wholesale rate to derive their profit. However, an independent FX provider will undercut your bank's offer, this can deliver up to 5% more currency in some instances, learn more here.

In the second week of April however the release of the FOMC minutes and commentary by William Dudley - the New York Fed Chief who is a well-established dove, suggested that the Fed was still considering the move towards normalisation as early as this summer.

The resultant strength in the USD therefore owes itself to a swift switch in sentiment.

“The reversal in US Treasury and German Bund spreads from the post-payrolls lows favours EUR-USD downside,” analyst Jeremy Stretch at CICB says.

Also pricing in a potential decline in the euro to dollar currency pairing to 1.05 are the team at technical specialists ICN Financial:

“The EURUSD pair has breached through the important support-turned into resistance- at 1.0710 as see on the provided daily chart.

“This breakout has activated negative signs on MACD and RSI, taking the pair the upper line of Linear Regression. Eyes should be now on the next support at 1.0580.”

BUT - The Dollar’s Strength Could be Due a Pause Again

The difficulty of predicting future moves in currencies needs no introduction.

So while there is a strong bias towards further euro dollar weakness amongst traders, there is the contrarian view that we are about to witness the selling pressure end.

Morgan Stanley have told their clients that they are favouring the USD buying interest to stall in coming days and say they expect the USD to be range-bound in coming weeks.

That said, the investment bank do also remind us that they are forecasting the euro v dollar exchange rate to fall to 1.03 by the end of 2015 so the longer-term picture remains negative.

Nevertheless, according to Morgan Stanley a short-term respite in dollar-buying interest will owe itself to the latest US employment report which provides the Fed with more time to wait before raising rates.

We mentioned the markets pricing in a June interest rate hike.

Morgan Stanley economists on the other hand acknowledge they are out-of-consensus and call for the first hike in early 2016.

“With markets questioning the underlying health of the US economy in 1Q, it was meaningful that labor market data converged to other soft macro prints, rather than broader economic data lifting in line with previously strong employment prints,” the note to clients reads.

If the markets align themselves with the MS viewpoint then expect the euro to recover to back above 1.10 and even higher.