The Euro to Dollar exchange rate rose to 1.0167 in the hours following the release of softer-than-expected U.S. inflation data, its highest level since September 13.

Gains came amidst a sizeable and broad-based selloff in the U.S. Dollar as investors reckoned the Federal Reserve was entering the final stretch of its current interest rate hiking cycle amidst signs inflation had finally peaked.

A key ingredient of Dollar strength over 2022 has been the Fed's rapid hike of interest rates in an effort to combat domestically generated inflation.

Signs domestic inflation is cooling were confirmed by a core CPI inflation print of 6.3% year-on-year in October, which was below estimates of 6.5% and below September's 6.6%.

Headline CPI inflation read at 0.4% month-on-month in October, slower than the consensus estimate of 0.6% and matching September's 0.4%. In the year to October inflation rose 7.7% said the U.S. Bureau of Labor Statistics.

The Euro's 1.5% advance against the Dollar takes spot to 1.0167, dollar payment rates on typical euro bank accounts to approximately 0.9885, however independent providers are certainly offering above-parity rates towards 1.0140. 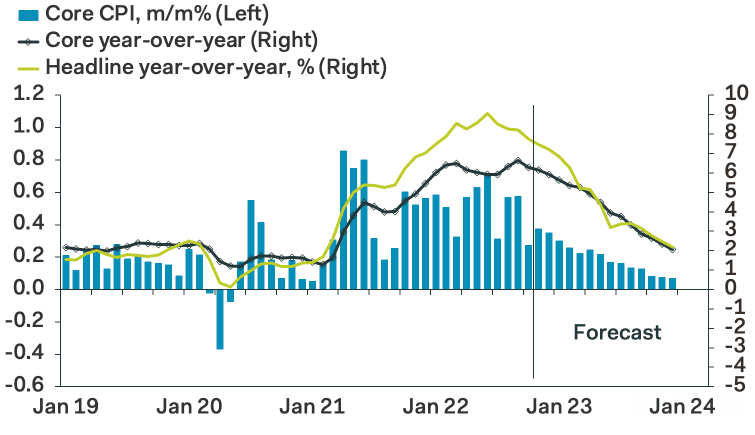 The above chart is courtesy of Pantheon Macroeconomics.

Investors are paying particular attention to the details of the report, noting a slowdown in inflation across a broader spectrum of items.

"We have learned over the past 18 months or so that one good core CPI print proves nothing, but we see good reasons to think this one is the real deal," says Ian Shepherdson, Chief Economist at Pantheon Macroeconomics.

These include lower used car prices, a drop in some transport services, a decline in health care service prices and a lower increase in owner's equivalent rents.

"The fever appears to be breaking in rents, a few months earlier than we expected," says Shepherdson. 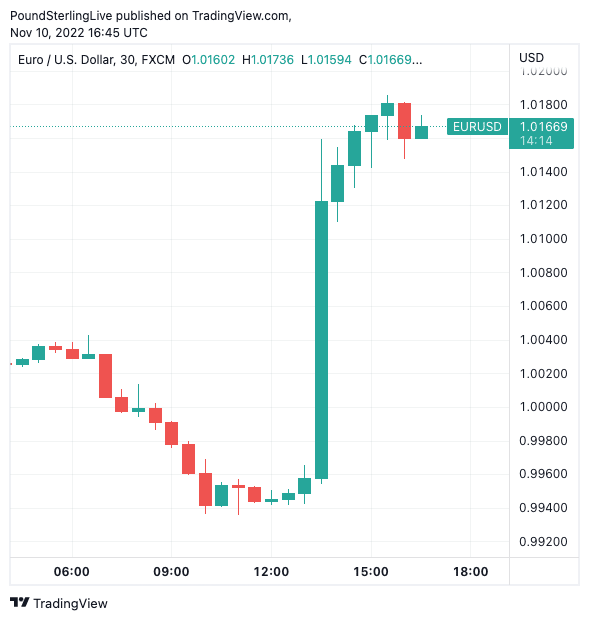 "Inflation will continue to slow in coming months, which will significantly reduce the need for continued aggressive rate hikes. This reading supports our view of a 50bp hike in December," says Knut A. Magnussen, Senior Economist at DNB Bank.

UniCredit's Campanella says although inflation is still far away from its 2% target, the Fed can breathe a sigh of relief for now.

This is consistent with UniCredit's call that the Fed will start slowing down the pace of its rate hikes at the December meeting, raising rates by 50bp and no longer by 75bp.

Both core and headline inflation might be decelerating, but inflation in the U.S. remains at levels not seen since the eighties, therefore the Fed will continue to press ahead, albeit at a slower pace.

Kohl says the Fed will slow the pace of rate hikes at its next meeting in December by lifting the federal funds target range by 50 basis points to 4.25%–4.5% by year-end.

"This would make the current rate-hiking cycle, with a total of 525 basis points in just nine months, one of the steepest and largest in the Fed’s history, creating considerable growth headwinds for economic growth in 2023," he warns.

One of the key requirements for a broader decline in the Dollar would be for growth in the rest of the world to pick up.

Therefore, expectations for a major economic slowdown in 2023 would be consistent with lingering support for the Dollar.

Nevertheless, the strong market reaction - that sees stocks ripping - suggests investors are more confident than they have been for some time that a turn in conditions is coming.

This could offer assets, such as Euro-Dollar, the potential to rally further over the coming days and weeks.