The Euro to Dollar exchange rate (EUR/USD) rallied from near its lowest level since June 2020 ahead of the weekend and some forecasters have suggested that Europe’s single currency may now be close to drawing a line under an almost year-long sell-off.

Europe’s unified unit rallied sharply and near to 1.13 on Friday alongside other low yielding ‘funding currencies’ like the Japanese Yen and Swiss Franc as global markets unravelled in what appeared to be a response to a new incarnation of the coronavirus being discovered in Africa.

“The other two factors which drove the BBDXY (and EURUSD) today are positioning (i.e. short-EUR unwinds), and the decline in the oil price, which we flagged as a potential topside risk for EURUSD spot earlier in the week. The positioning factor probably has further to run,” says Stephen Gallo, European head of FX strategy at BMO Capital Markets

The Euro-Dollar exchange rate had fallen briefly beneath the 1.12 handle previously this week as the Dollar advanced to new highs in response to signs of a further ‘hawkish’ shift in the policy stance of the Federal Reserve, although one that was in doubt by Friday. 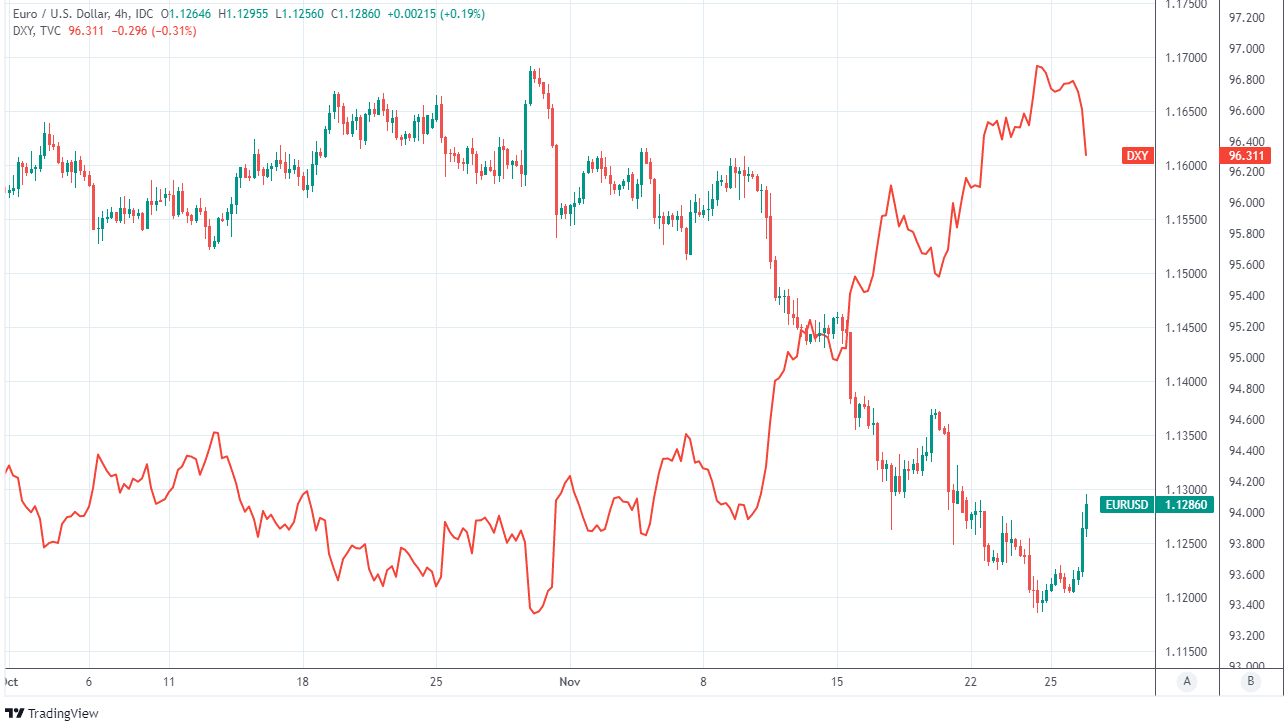 Above: Euro-Dollar shown at 4-hour intervals.

“Balanced against a still dovish ECB, the hawkishness of the Fed is, and has been, a USD positive factor. That said, how much more the USD can react to this news depends on what is already priced in,” says Jane Foley, head of FX strategy at Rabobank.

“Medium-term, we continue to favour the USD. However, with the market now long USD and short EUR and the money market very aggressively positioned for Fed rate hikes next year, there is scope for pullbacks in the currency pair,” Foley had written in a Thursday research briefing.

There was until Friday a seemingly mounting risk of the Fed winding down its quantitative easing programme at a faster pace than that opted for at November’s meeting and lifting its interest rate sooner than guided for, although market expectations for the Fed Funds rate were ebbing on Friday.

“The pre-existing economic and geopolitical backdrop heading into the Nu variant, the balance of risks over the next 1-2M, and the potential for a shift to 'phase 2' in the USD, should eventually open the door to selling opportunities in EURUSD spot,” says BMO’s Gallo.

While the Dollar fell and the Euro rose ahead of the weekend the single currency had recently been burdened by a return to varying degrees of ‘lockdown’ and imposition of more draconian restrictions in countries including Czech Slovakia, Portugal, Austria and the Netherlands.

These gave rise to concerns in some parts that other countries could soon follow suit and weighed heavily on the Euro in recent weeks.

“Our 3M EURUSD view is 1.10, followed by a relatively flat profile for the pair thereafter,” BMO’s Gallo said previously in a Wednesday forecast review.

Tuesday’s acknowledgement of growing upside risks to the inflation outlook by the European Central Bank’s (ECB) Isabel Schnabel and Klas Knot had offered momentary support to the Euro this week, and it’s possible that ECB policy could now be becoming less of a headwind for the Euro.

Two ECB policymakers acknowledged that short and medium-term inflation forecasts may need to be revised higher in December and suggested the ECB’s pandemic-inspired quantitative easing programme could be likely to end in March 2022, although the implications of this are not straightforward.

“The EUR faces twin downside risks in relation to the ECB: 1) if the ECB lags other central banks on policy normalization, or 2) if it is forced into an abrupt 'hawkish' U-turn on policy, which may cause intra-euro credit spreads to widen substantially,” BMO’s Gallo cautions. 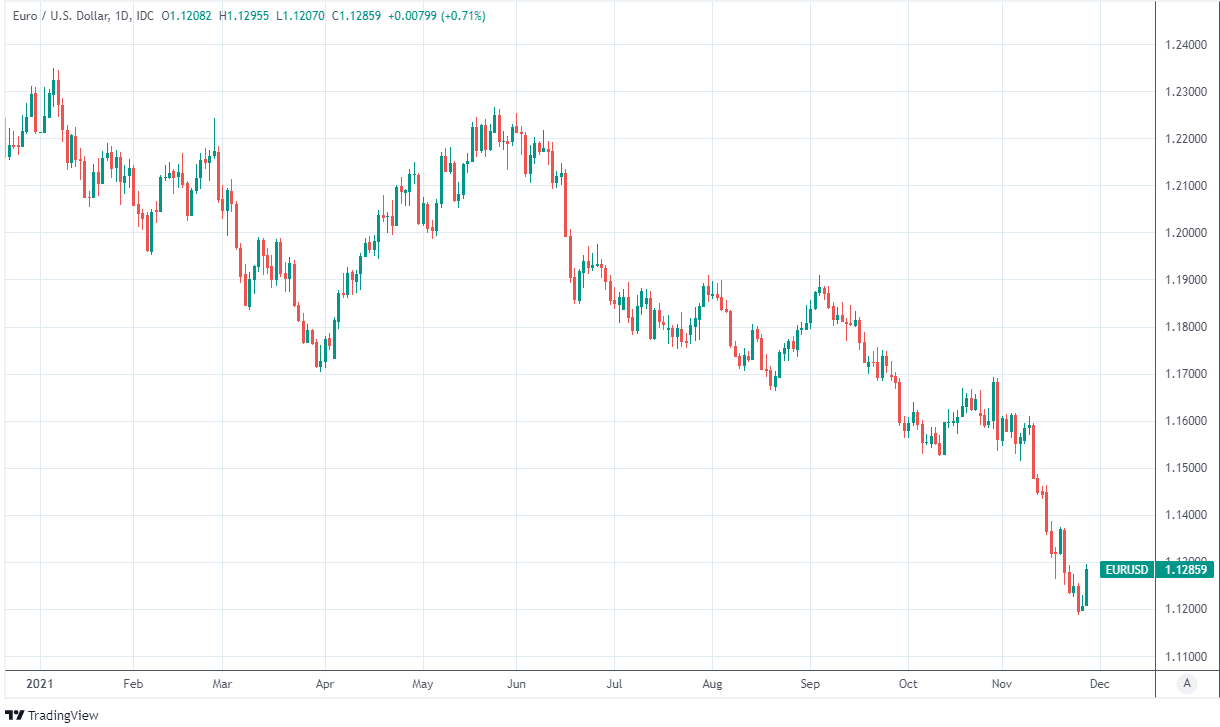 Above: Euro-Dollar shown at daily intervals.

While the prospect of a March 2022 end to ECB’s €1.85 trillion Pandemic Emergency Purchase Programme could potentially elicit interest in the Euro from some parts of the market, the bank’s original €20BN per month Asset Purchase Programme is still set to remain in place.

In addition, and as has been pointed out by Gallo and the BMO team, a curtailment of QE would not necessarily deliver the Euro-Dollar rate the same kind of uplift enjoyed by the Dollar in recent months.

“The ECB has done a good job of anchoring European rates relative to moves in the USA, and that’s why we are down here, but I’m skeptical that we can make much further downside progress in EURUSD in the short-term,” says Brent Donnelly, president at Spectra Markets and a veteran trader.

The Euro-Dollar rate had fallen more than eight percent for 2021 when trading just above the 1.12 handle earlier this week although its pace of decline slowed notably throughout the week in price action that led the single currency to appreciate against many major counterparts along the way.

This is supportive of the notion that the single currency could be close to bottoming out following almost a year of steady declines, although it remains to be seen whether the Euro-Dollar rate can get up the fundamental energy or fuel that might be necessary for any kind of sustained recovery.

“My base case would be a 1.1170/1.1340 consolidation for a while to burn off the oversoldness and punish late sellers of spot and late buyers of EURUSD vol (as 1-month has now spiked from 4.6% to almost 7%). There is no fundamental reason to be long EURUSD, though it could be an appealing wiseguy trade, like it was in March 2021,” Donnelly wrote in a market commentary on Wednesday. 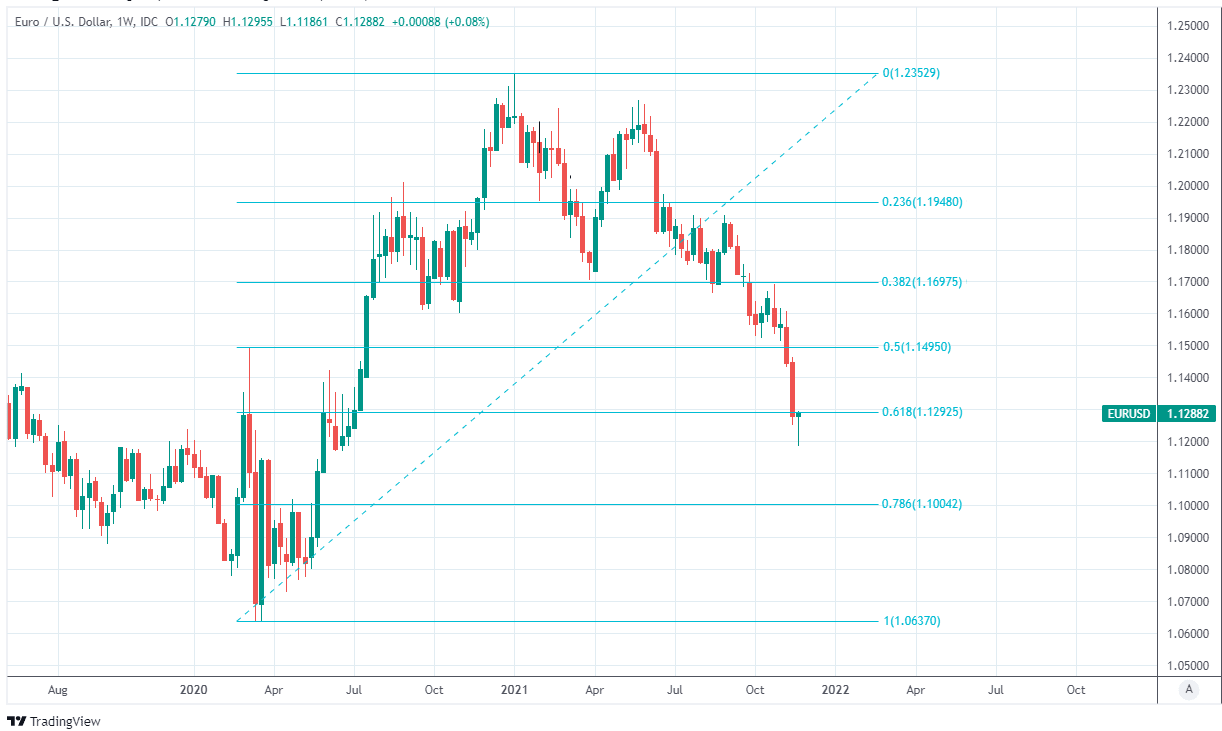