The Euro-to-Dollar rate was on course for a fourth consecutive gain and appeared poised for an attempted return to August’s highs in the mid-week session after the greenback faltered anew and some analysts abandoned bearish calls on the single currency.

Europe’s unified unit lifted further above the 1.18 handle on Wednesday after reclaiming the level in the prior session when the Dollar faltered anew and some analysts, and seemingly investors too, abandoned earlier wagers against the Euro-Dollar rate.

“The trade-weighted USD is breaking below key trend line support off of the June low which leads us to believe that we’ll need to be more patient with our medium-term bullish outlook on the greenback. We’re exiting our short EUR/USD trade for now, but our bias is to re-initiate once again in the coming weeks,” says Bipan Rai, North American head of FX strategy at CIBC Capital Markets in a Tuesday research note.

While many in the market still retain bearish views on the medium-term outlook for the Euro, rising hopes of a possible final quarter policy shift at the European Central Bank (ECB) have served alongside fresh declines for the Dollar to further discourage bets against the single currency this week.

Deutsche Bundesbank President Jens Weidmann was on Wednesday the latest member of the Governing Council whose rhetoric supported the emerging view that the ECB could be likely to decrease in the coming months the size of the weekly government bond purchases carried out under its Pandemic Emergency Purchase Programme; the umbrella or banner under which it carries out quantitative easing for coronavirus-inspired reasons.

“Unless we hear from the doves later this week, the idea that the PEPP scheme is up for debate in September could lend a little more support to the EUR and also German Bund yields, where our strategy team sees a further 5-10bp of upside,” says Chris Turner, global head of markets and regional head of research for UK & CEE at ING. 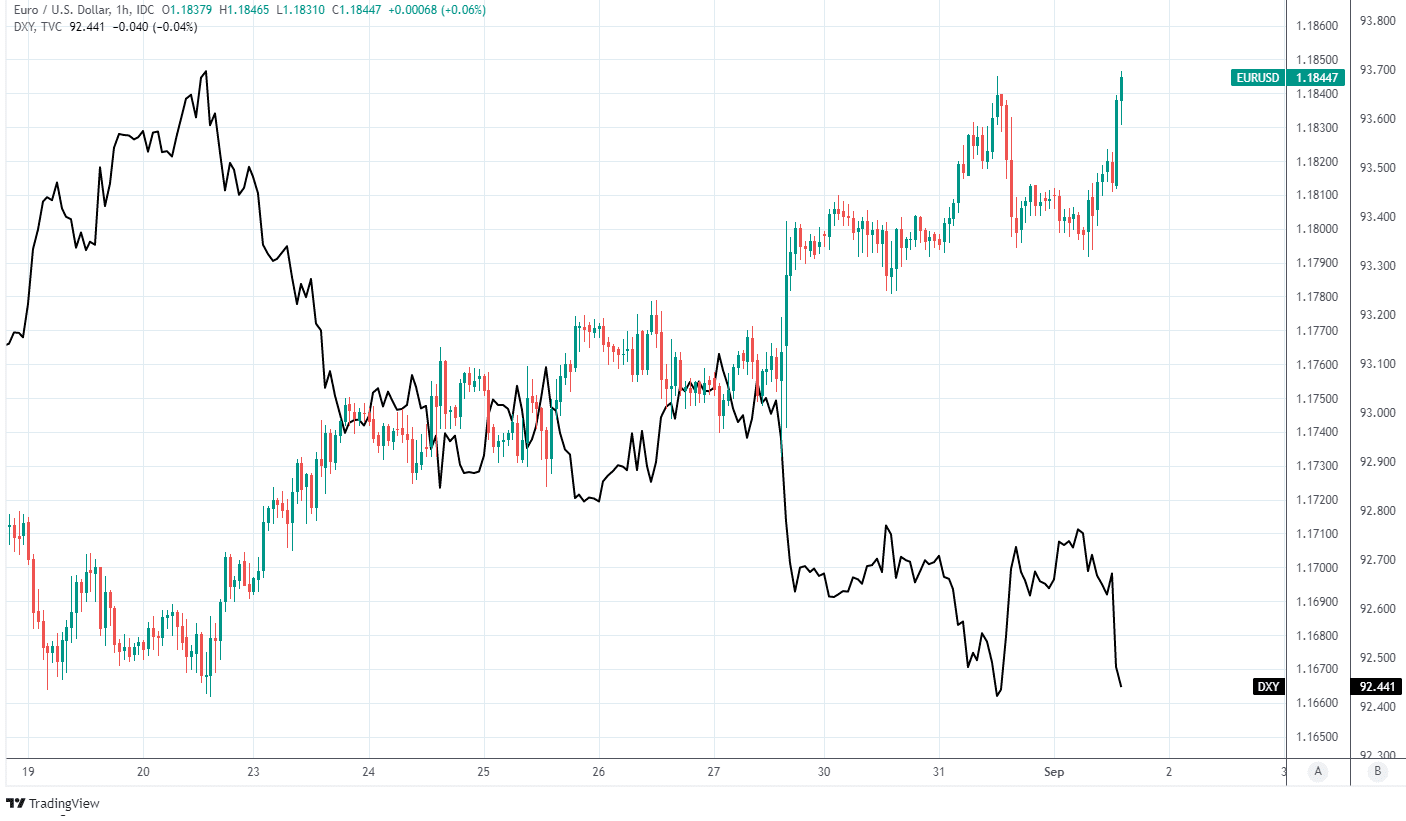 “We should not get carried away, however. Having shifted strategy as recently as July, our team believes that heavy-hitting doves like Christine Lagarde and Philip Lane would not allow an ECB 'taper' to emerge ahead of the Fed and at this stage we believe PEPP will stay at its current elevated rate,” says Turner writes in a Wednesday note.

President Weidmann reiterated in a speech on Wednesday an already-known preference that the ECB’s PEPP programme be wound down once the coronavirus crisis is over but clarified this with the suggestion that weekly purchases should be phased out slowly rather than halted suddenly.

The comments imply a preference for a ‘tapering’ process that would inevitably need to begin before the March 2022 date at which some economists estimate the €1.85 trillion allocation to the programme would be exhausted, and are not out of sync with the rhetoric of other ECB officials.

“Remember Draghi at the December 2016 Governing Council meeting explaining why a slowdown in the pace of purchases from 80bn/month to 60bn/month wasn’t tapering because there was no plan to continue the slowdown to zero? That same playbook is likely to be used by President Lagarde at next week’s meeting if the ECB decides to return to a “normal” pace of PEPP purchases from the “significantly higher” pace in Q2 and Q3,” says Anders Svendsen, chief analyst at Nordea Markets.

Weidmann’s comments echoed those made by De Nederlandsche Bank President Klaas Knot and Oesterreichische Nationalbank Governor Robert Holzmann on Tuesday and come after the ECB’s chief economist Philip Lane suggested in an interview with Reuters last Wednesday that the Governing Council could discuss in September’s meeting the idea of reducing the level of purchases over the final quarter of the year.

“More interesting for investors would be signs of a shift in sentiment amongst the ECB doves. Despite the commentary of ECB members in recent days, it is still possible that the doves will prevail,” says Jane Foley, head of FX strategy at Rabobank.

“In any case, even if the ECB does decide to taper its PEPP programme in the final few months of its existence, this may have little to no impact on the view that the ECB is set to be a laggard in terms of policy normalisation amongst G10 central banks. This could mean the EUR remains on the back foot relative to the USD and potentially the pound,” Foley writes, in a Tuesday note.

Expectations for a meaningful shift in ECB policy are still low following the adoption of its new inflation-targeting strategy in July, which is seen as something that risks necessitating an even longer period of extraordinary monetary support than before if Europe’s economy is to deliver the marginally higher inflation target, but recent commentary from officials has provided a supportive tailwind to the Euro-Dollar rate nonetheless. 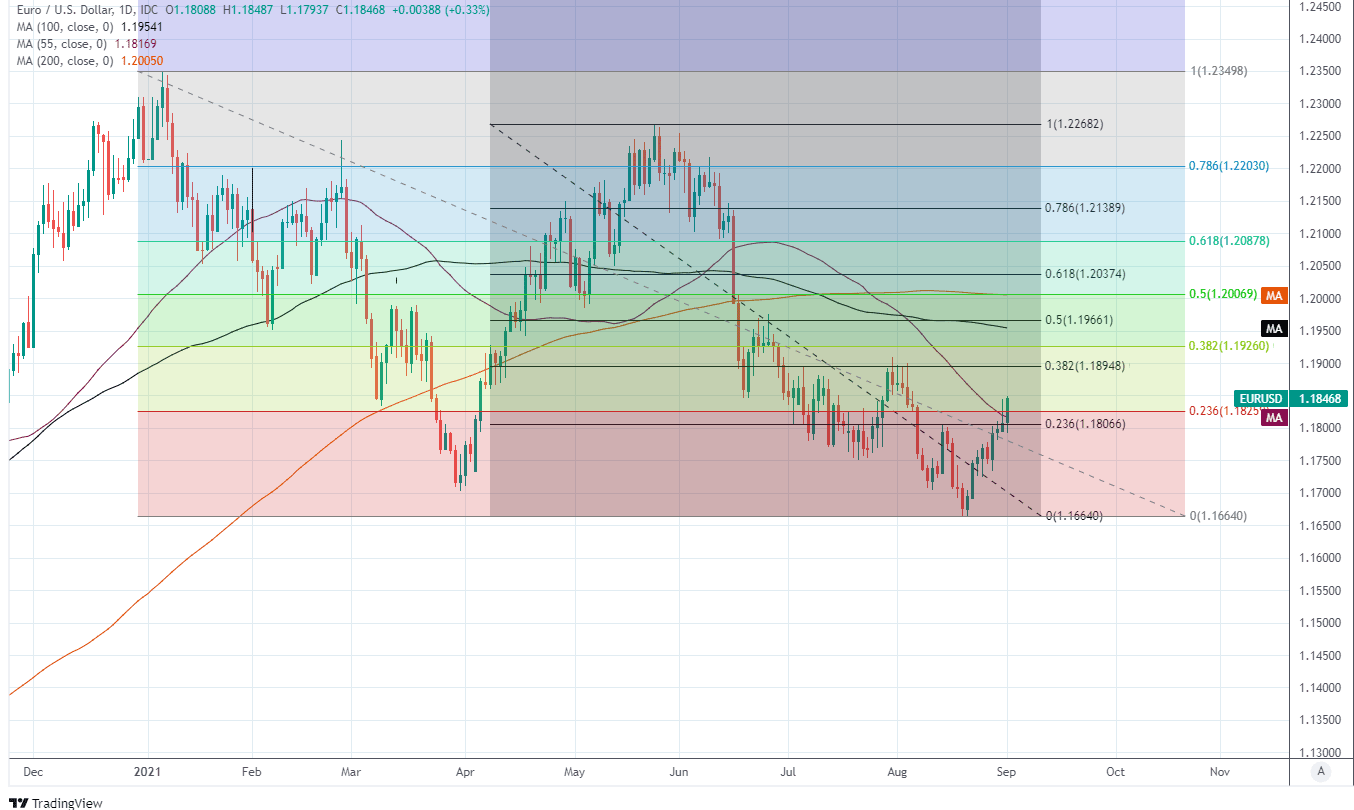 Above: Euro-to-Dollar rate shown at daily intervals with major moving-averages and Fibonacci retracements of June and overall 2021 declines indicating possible areas of resistance.

ECB policy talk has coincided with a widespread retreat in Dollar exchange rates following Federal Reserve Chairman Jerome Powell’s speech at the Jackson Hole Symposium of central bankers last Friday, as well as a nascent trend reversal on the charts.

“We expect that the Fed’s ‘patient’ approach towards QE taper will remain a drag on the USD in the near-term. EUR/USD in particular could benefit given that one of the strongest headwinds for the pair has been the growing policy divergence between the dovish ECB and the increasingly hawkish Fed,” says Manuel Oliveri, a strategist at Credit Agricole CIB, in a Wednesday briefing.

Chairman Powell confirmed last Friday the U.S. economy has been making light work of the “substantial further progress” toward full employment sought by the bank as a prerequisite for it to begin winding down its quantitative easing programme, but cautioned that “we will be carefully assessing incoming data and the evolving risks,” before making any decision on the scheme.

This has been flagged by analysts as something that could potentially delay the decision on tapering but it may also have mattered for the Dollar that Powell warned the economy will have to pass “a different and substantially more stringent test” before the Fed lifts its interest rates, one involving reemployment of the remaining six million workers idled by the coronavirus, which effectively rules out a rate rise any time soon.

Meanwhile, the Euro-Dollar rate’s recovery and daily close above the 1.1771 level on the charts last Friday marked the completion of a falling wedge reversal pattern that has got technical analysts looking for the single currency to extend its gains as far as 1.20 over the coming days and weeks.

“The market has recently completed a falling wedge reversal pattern and we now look for gains to the 1.1909 July high and then the 1.1990/1.2005 March high and 200-day ma,” says Karen Jones, head of technical analysis for currencies, commodities and bonds at Commerzbank, who’s a buyer of the Euro-Dollar rate from 1.1810. “Dips should find the previous downtrend at 1.1755 offers near term support.”