- EUR/USD could be set to probe above 1.18
- As trend reversal takes shape on the charts
- USD declines doing heavy lifting of EUR/USD
- Sept may see homegrown tailwind cultivated

The Euro-to-Dollar rate entered the new week with the charts indicating a trend reversal is afoot, one that could be nurtured over the coming days by further declines from the Dollar, although hints of a possible September change in European Central Bank (ECB) policy may also support the Euro too.

Europe’s unified unit rose above a key trendline at 1.1771 ahead of the weekend when the Dollar came under widespread pressure as the market appeared to begin cashing out of previously rising wagers on the U.S. currency.

“EUR/USD spent much of last week pushing hard into the short term downtrend and finally broke higher on Friday. This has completed a falling wedge reversal pattern and we now look for gains to the 1.1909 July high and then the 1.1990/1.2005 March high,” says Karen Jones, head of technical analysis for currencies, commodities and bonds at Commerzbank in a Friday note.

Jones and the Commerzbank team had flagged the 1.1771 level as key to confirming a “falling wedge” reversal pattern on the charts, which often signifies the resumption of an earlier trend following periods of consolidation and now indicates the Euro-Dollar rate has effectively bottomed out.

They now look for the single currency to advance as far as 1.2005 although the Euro must first get past a cluster of technical resistances above its opening level for the week including Fibonacci retracements at 1.1806 and 1.1825 and its 55-day moving-average at 1.1831.

"Initial resistance at the 55-day ma at 1.1826 may provoke some near term consolidation," Jones says. 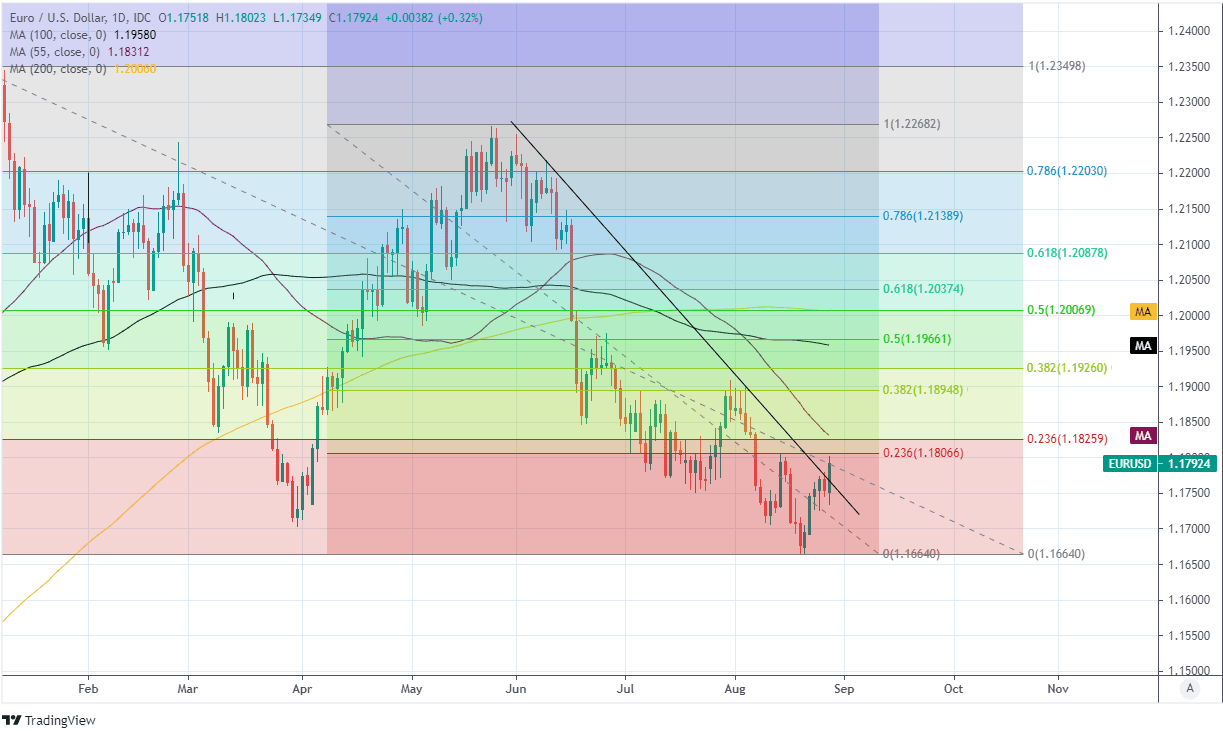 Europe’s single currency and others were buoyed after Federal Reserve (Fed) Chairman Jerome Powell’s keynote address at the Jackson Hole Symposium hosted by the Federal Reserve Bank of Kansas in which he appeared to disappoint those with bullish views on the Dollar.

This was when telling the market that if the Fed does go ahead with a 2021 tapering of its quantitative easing programme, the U.S. economy will then have to pass a “different and substantially more stringent test” before it lifts U.S. interest rates.

“That latter point has seen investors nudge lower expectations of the first Fed tightening in late 2022 and has been a key factor weighing on the dollar,” says Chris Turner, global head of markets and regional head of research at ING.

The Dollar’s subsequent unravelling comes in the wake of a months-long rally and has left no currency untouched although Turner and the ING team say that if the Euro is to sustain an advance beyond the 1.1850 level, a homegrown rather than international catalyst could be required.

“We’ll have to assess at the September meeting the appropriate calibration for the final quarter of the year, taking into account the movement in market interest rates and the inflation outlook,” says Philip Lane, chief economist at the European Central Bank, in an interview with Reuters last week.

“In the upcoming meetings, whether September or December, we’ll have to take into account the movements in interest rates. Our tolerance for the level of financing conditions depends on how robust the inflation dynamic is looking,” Lane later said.

While the ECB’s next meeting remains weeks away in the long grass of September, and the coming days are likely to be dominated by the twists and turns of the Dollar in the response to the output of the U.S. economic calendar, the single currency could potentially find itself enjoying homegrown support in the month ahead if last week’s insights from ECB chief economist Philip Lane were a prelude to a favourable policy change.

Lane told Reuters that given Europe’s increasingly robust economic recovery and the substantial support already provided by the ECB’s Pandemic Emergency Purchase Programme of quantitative easing, recent steep declines in government bond yields could mean that it becomes appropriate as soon as next month to reduce the pace of weekly government bond purchases under the programme. 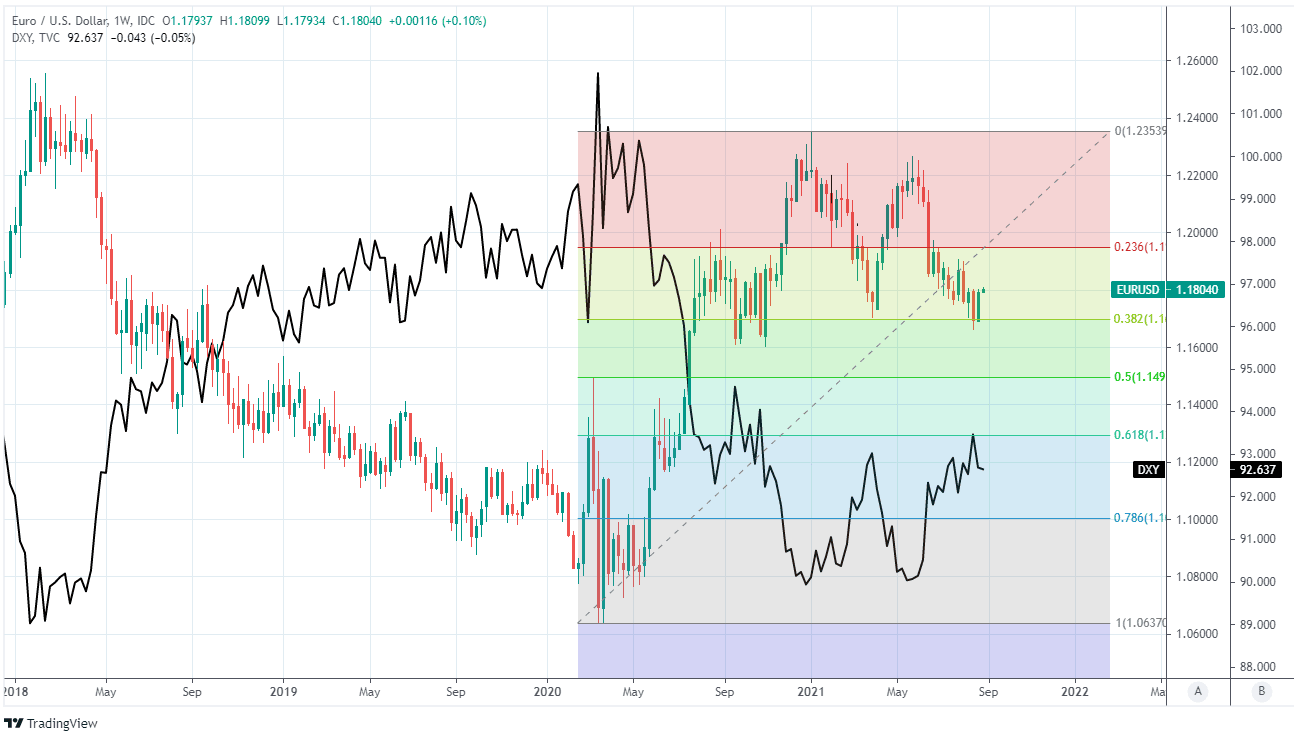 “Bear in mind that the ECB will never explicitly call it tapering, rather just technical adjustments to the program,” says Andreas Steno Larsen, chief FX strategist at Nordea Markets. “Levels just below 1.19 are interesting to be short from again, but for now the risk is on the upside in the cross.”

The Euro-Dollar rate rallied briefly last Wednesday when Lane’s remarks were made public though the bulk of its gains for the week overall were the result of declines by the Dollar, and with the market response to August’s inflation figures from the Eurozone aside, it’s the U.S. currency that could again be in the driving seat of the Euro-Dollar rate over the coming days.

August’s inflation figures are out on Tuesday at 10:00 and economists have widely suggested that a further temporary leap above the 2% target of the ECB could be likely, though it’s not obvious this would do much for the Euro given the bank’s doubts about whether economic conditions are sufficient to ensure its target can be sustainably delivered over the longer-term.

“The key data release this week is of course the nonfarm payrolls report on Friday. The debate over QE tapering is very much now about seeing “further substantial progress” toward the Fed’s goals,” says Lee Hardman, a currency analyst at MUFG. “A strong report this week is required to confirm that progress. The table below shows the 30min move in EUR/USD but the data also shows larger moves over a 6hr window.”

The week ahead is littered with key U.S. economic figures and any market disappointment over the outcome of them could potentially support the Euro.

“Unless there are any surprises from the September ECB meeting, it seems aggressive money-printing from the ECB will keep the EUR as a laggard in any pro-risk move, with EUR/USD struggling to hold any gains above 1.1800/1850,” says ING’s Turner.

Consensus looks for the U.S. economy to have created or recovered from the coronavirus some 750k new jobs in August when the latest non-farm payrolls report is released at 13:30 on Friday, a lesser amount than the 943k seen in the prior month but one that is still greater than even the pandemic averages seen previous to the third-quarter.

But before those are out investors will look for clues about the continuing pace of growth in Tuesday’s Institute for Supply Management (ISM) Chicago PMI, which measures business conditions in America’s third largest city economy, and in Wednesday’s ISM Manufacturing PMI as well as Friday’s highly important ISM Services PMI.

Last month these all indicated the pace of U.S. growth accelerated this quarter, although Friday’s job report is arguably the most important because along with inflation developments, it’s the pace of labour market recovery that guides the Fed's pending decisions in relation to its quantitative easing programme and interest rate policy.