The Euro is unlikely to make a concerted break above current levels against the Dollar say strategists at TD Securities.

In a briefing to clients, Mark McCormick, Global Head of FX Strategy at TD Securities says it "is once again an opportune time to sell" the Euro.

The call comes as the Euro-to-Dollar exchange rate (EUR/USD) revisits the 1.22 area, which has in the past been noted to be one that it struggles to advance beyond. 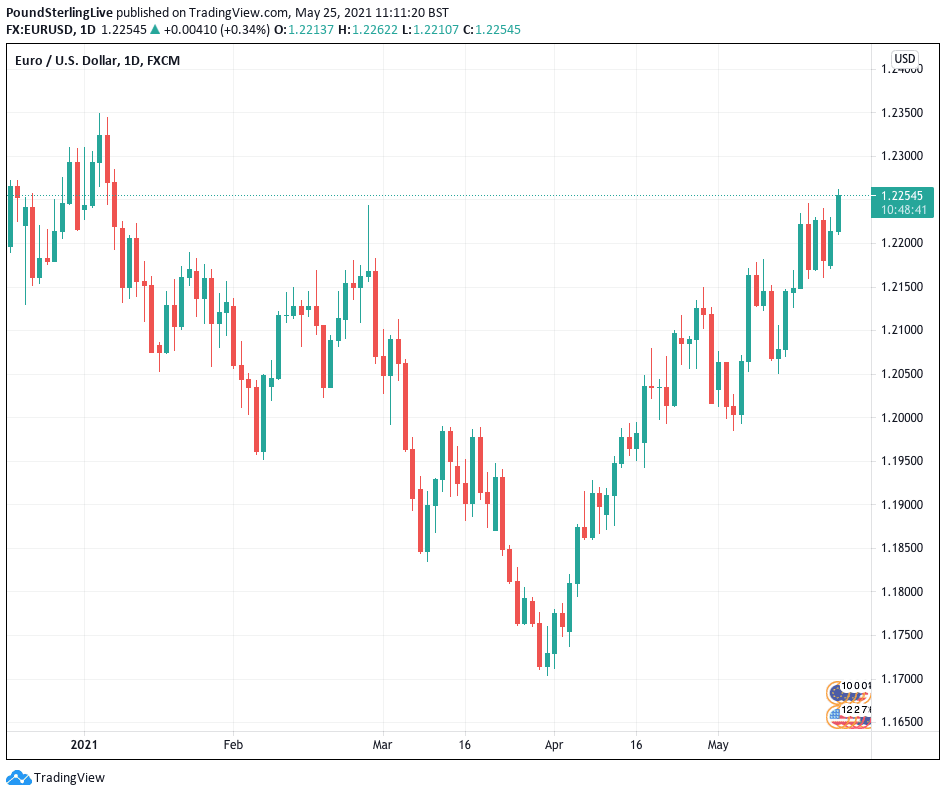 Above: The Euro-Dollar daily chart

"The EUR's back to the critical 1.22 pivot point, spurring questions about what's next. The primary questions are whether it will stay in the 1.20s, push to 1.25 and above, or whether it's another head fake. We're in the latter camp," says McCormick.

The Euro is one of the better performing G10 currencies over the course of the past week, having advanced against all its major peers apart from the Swiss Franc.

At the time of writing the Euro-Dollar has in fact reached its highest level January 21 and bulls will be looking for the current impulse of buying to bring with it a new 2021 high, which is currently set at 1.2349.

"For now, we push back on the narrative that we're on the cusp of a EUR surge, reflecting the vaccine-led pickup trade," says McCormick.

TD Securities have kept an eye on how Eurozone countries are emerging from the most recent lockdowns, noting that mobility differentials between the U.S. and Europe have often been a good indicator of Euro-Dollar performance. 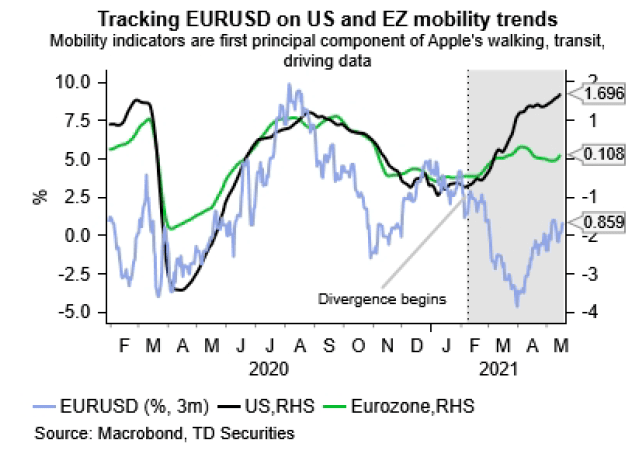 "A vast mobility gap emerged between the US and EZ. It's still present now, and more importantly, we haven't seen a sharp turn in the EZ's side even though US vaccine rates have stalled and EZ ones have surged," says McCormick.

Furthermore, research shows that the Euro is still not a top-tier growth currency.

"A simple regression of the mobility data over the past six months shows about 40% explanatory power and implies EURUSD back below 1.20," says McCormick.

Risk sentiment will matter too with strategists at TD Securities saying they expect another setback to then global 'reflation' trade to bite again soon, which inevitably would favour the Dollar.

"A near-term disruption to the reflation trade would sink the EUR, and why we like the USD story on a risk setback rather than a US fundamental story," says McCormick. 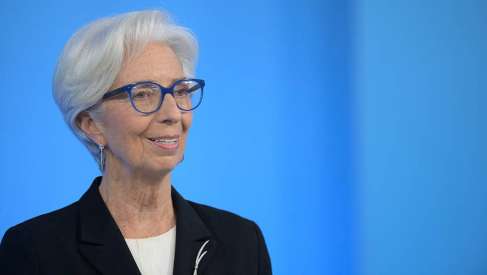