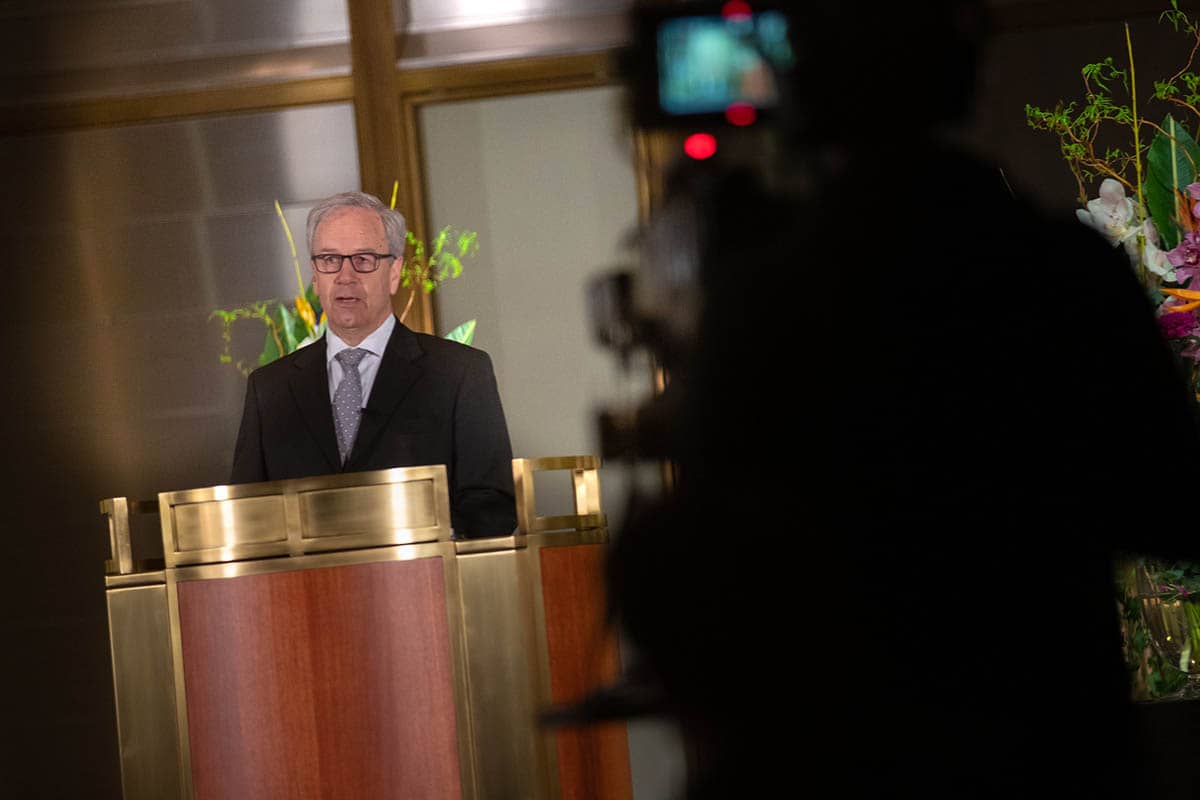 Norway’s Krone rose against half of the major currency basket on Thursday in what may have been relief after the Norges Bank left its cash rate unchanged, in line with market expectations, before reiterating the preconditions that must be satisfied before it follows through on a March suggestion that it could lift interest rates in the second half of the year.

“Economic developments have been largely in line with the projections in the March Report. Activity has picked up since spring 2020, but in recent months, stricter containment measures have restrained the recovery, and the number of furloughed workers has risen,” Norges Bank said in a statement.

Whether the bank becomes the first among major economies to lift borrowing costs in either the third or fourth quarter depends entirely on developments in the domestic economy this quarter and next, although notably the job market, which in turn leaves the outlook for the Krone hinged on coronavirus infection and vaccination trends. 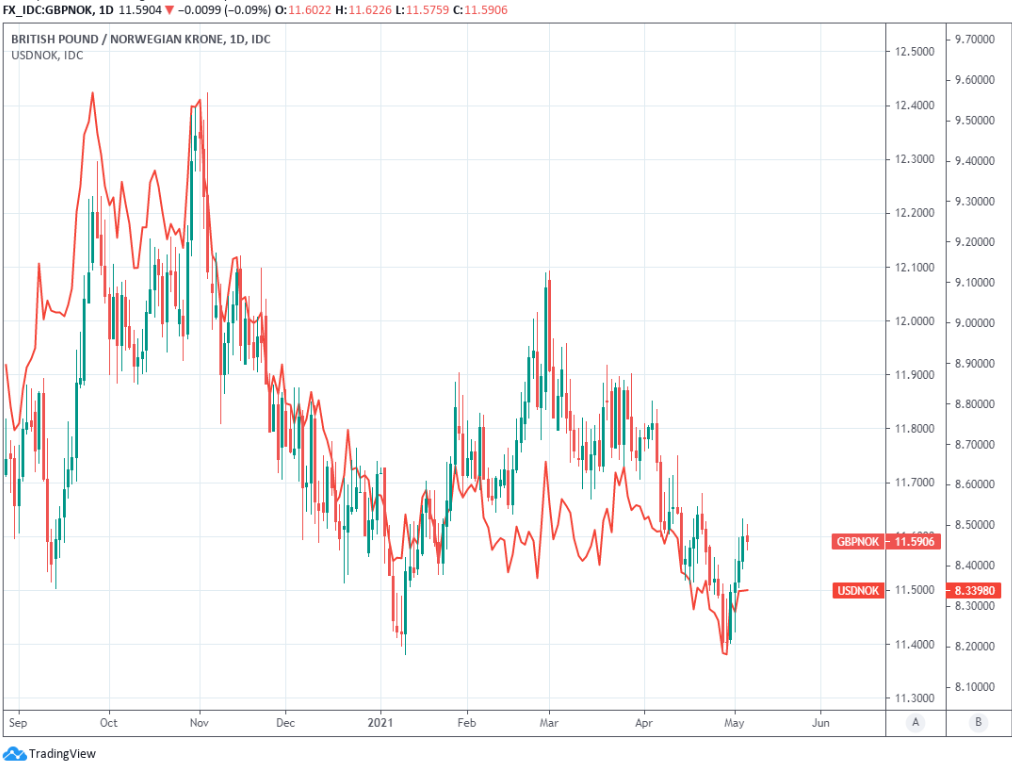 Above: GBP/NOK shown at daily intervals alongside USD/NOK.

Coronavirus infections rose across Europe as a third wave swelled last quarter, leading governments to renew or otherwise tighten ‘lockdown’ and other containment measures that have set the continental economic recovery back by months.

“We remain upbeat on NOK and expect EUR/NOK to persistently settle below the 10.00 level from summer onwards as the rebound in the eurozone and Norwegian economies, the more synchronised global recovery in the second half of the year and the NB being closer to the start of the tightening cycle all benefit the pro-cyclical NOK,” says Petr Krpata, chief EMEA strategist at ING.

Krpata and the ING team forecast that the Euro-to-Krone will end 2021 around 9.80, which would be its lowest since late 2019, and cite both the Norges Bank interest rate outlook as well as the Krone’s exposure to a recovering global economy through its link to oil prices.

Oil prices have risen more than 30% in 2021, aided by Organization of Petroleum Exporting Countries’ management of supply and improving investor expectations for the global economy, which is set to benefit alongside the U.S. economy in the quarters ahead from trillions of fiscal support which has either already been provided by Washington to companies and households, or is currently working its way through the legislative pipeline.

“NOK rates will probably rise in the second half of the year. That keeps them firmly at the front of the G10 hiking list, and while EUR/NOK has become stuck around 10, the next move is more likely to be to 9.75 rather than 10.25,” says Kit Juckes, chief FX strategist at Société Générale. 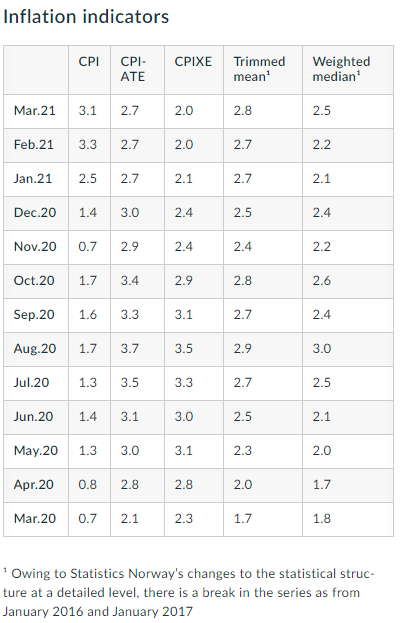 As a reminder for readers, the central bank cited above-target inflation and an improving outlook for the domestic economy back in March for an unambiguous notice to the market that it’s likely to begin lifting the cash rate from current levels in the second half of 2021.

Norwegian inflation has accelerated sharply this year, rising above the 2.5% target and as far as 3.3% in February before dropping back to 3.1% in March.

Meanwhile, exchange rate and wage price developments since then have suggested that inflation could remain stubbornly elevated in the months ahead.

“A swift recovery in H2 is likely once restrictions are removed, which should support a rate hike by the end of the year as is suggested by Norges Bank’s current rate path forecast. However, an earlier rate hike appears less likely given recent weaker-than-expected economic performance,” says Yuan Cheng, a strategist at Natwest Markets.

When the Norges Bank first guided in March that a rate rise could be seen in the second half of the year it did so at least partly on the understanding that “the krone appreciation and prospects for moderate wage growth suggest that inflation will move down ahead,” which has been a key driver of expectations for outperformance by the currency. 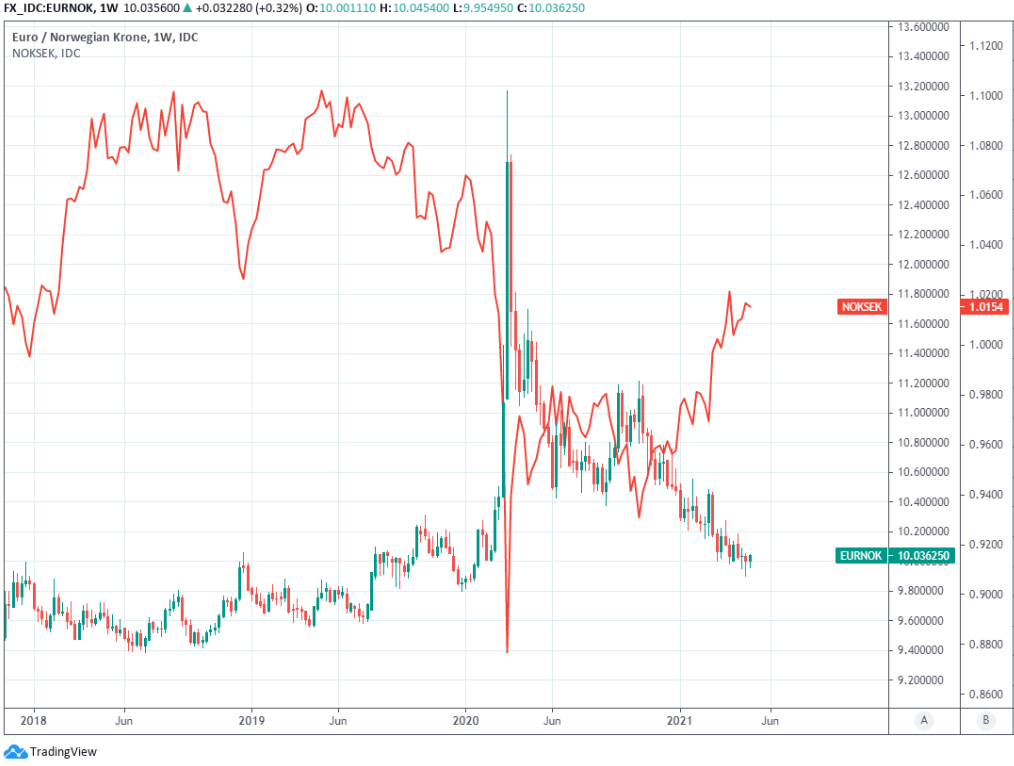 Above: EUR/NOK shown at daily intervals alongside NOK/SEK.

This was because rising exchange rates can reduce inflation by cheapening the cost of imports, but since then the Norwegian Krone has depreciated against the Swedish Krona and appreciated only marginally against the Euro - which both account for around half of the trade-weighted exchange rate.

The Krone has also sat relatively unchanged against most of the majors since the March interest rate decision, though was lifting higher on Thursday, meaning that exchange rates have thus far done little to to bring inflation back to the 2.5% target.

There have been indications of late that pay growth for workers could be stronger than was previously assumed by many economy watchers by the time that an end-May central wage negotiation is concluded.

The national employers’ organisation, or Confederation of Norwegian Enterprise, agreed a +2.7% pay increase for around 180k workers who’re represented by one of Norway’s largest unions last month, which could potentially influence other pay settlements agreed across the country this month.