- EUR/USD recovery to pick up after slow start
- Euro reflation & another USD downturn looms
- With summer offering EUR a shot at 1.29 high

The Euro-to-Dollar exchange rate recovery gathered steam last week and is likely to continue over the coming days, aided by a cacophony of domestic and international developments as well as a likely central bank bid that helps underwrite a summer climb to seven-year highs.

Europe's single currency ended last week on the offensive and is back up to 1.21 on Monday after IHS Markit’s Flash PMI surveys of the Eurozone’s services and manufacturing sectors scaled record highs for April, lifting EUR/USD to a hat-trick of weekly gains.

This strong performance could mean the single currency is slow to get started on Monday although any soft patch is unlikely to endure for very long, not least because brightening global economic prospects are likely to be buttressed this week by strong U.S. GDP data.

This would be just before the Federal Reserve (Fed) gives its nth iteration of a decidedly Dollar-bearish policy outlook at 19:00 on Wednesday which, when combined with the strong U.S. economic performance, may take a toll on the countercyclical Dollar.

"The week ahead sees the first look at eurozone 1Q21 GDP. This is widely expected to contract and signal a second technical recession within a year. This is all old news, however. Instead, eurozone confidence is picking up sharply as evidenced in Friday’s flash April PMI releases and should be echoed in Monday’s German Ifo readings,” says Chris Turner, Global Head of Markets and Regional Head of Research at ING.

Europe’s unified unit has been aided of late by improving investor sentiment toward Europe, which comes amid a decline in new coronavirus infections, rising vaccination rates and a raft of better-than-expected economic figures. 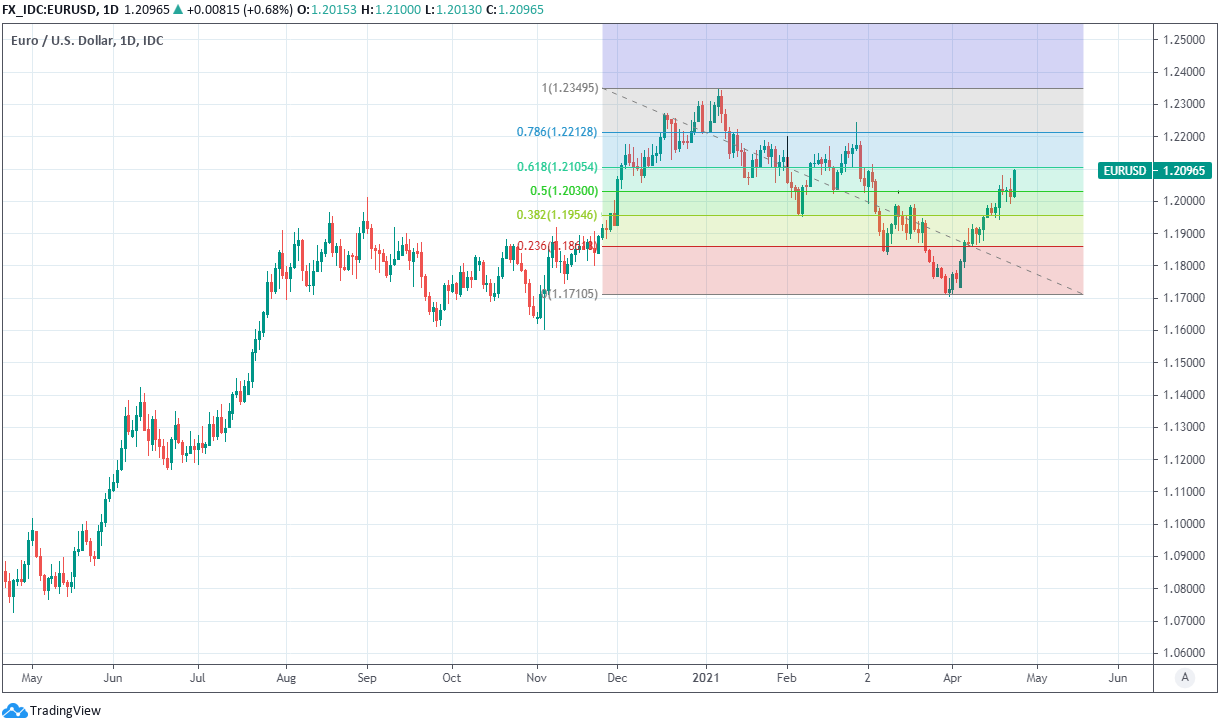 Meanwhile, the Dollar is the worst performing major currency on the month while the pro-cyclical and somewhat weatherbeaten Euro is among the better performers having recovered from lows near to 1.17 while turning into April.

"We expect the [Dollar] downtrend to resume this quarter, led by faster European growth (and last week we revised up our 3m EUR/USD target to 1.25 and issued a new long recommendation). Beyond the near term, we continue to see a structurally negative outlook for the US currency," says Zach Pandl, co-head of global foreign exchange strategy at Goldman Sachs.

The trillions spent by Washington on fiscal support this year have likely helped the Euro first by buttressing expectations of the global economic recovery, while also weighing on the Dollar.

Rapid U.S. growth is likely to be confirmed by Wednesday’s first-quarter GDP report, but was already threatening to lift inflation and eat the returns earned by those investors who hold the Dollar in part due to the Fed’s commitment as part of its average-inflation-targeting strategy to keep interest rates near zero for years yet.

Those factors have long been expected by analysts to lift the Euro back to multi-year highs in 2021, but if this wasn’t bearish enough for the greenback and bullish enough for the single currency already; the possibly pending turn lower by the also-countercyclical Renminbi certainly will be.

The Renminbi has rallied for six months against the China Foreign Exchange Trade System (CFETS) basket of currencies and officials at the State Administration of Foreign Exchange (SAFE), which is a part of the Peoples’ Bank of China (PBoC), indicated last week that this period of appreciation may now be coming to end.

“External factors for China’s currency, the yuan, to appreciate are weakening” according to a Reuters report covering remarks made by Xuan Changneng, deputy administrator of the SAFE at Asia’s Boao Forum last Monday.

It may not be a coincidence that this is the stance being adopted by Chinese officials around the same time as the Dollar is beginning to turn lower, as both are countercyclical currencies, although a Renminbi decline against the CFETs basket would have broad implications for the global market.

This is because any decline of the trade-weighted Renminbi would require the PBoC to decide whether it would rather buy the U.S. Dollar en masse, or to sell it en masse in exchange for other currencies like the Euro and Pound.

If for no other reason, the reducing importance of the greenback to Beijing and rising relevance of the Euro could mean any determination by SAFE that a Renminbi adjustment lower is warranted would be a bearish signal for the Dollar and a very bullish one for the Euro.

One where the PBoC opts to sell Dollars and buy Euros as well as a collection of other currencies so as to ensure that any resulting uplift of the trade-weighted Euro is commensurate with the current condition and prospects of the Eurozone economy.

This particular sell-the-Dollar choice might be made more likely by the broadly virtuous impact it would have on the trade-weighted exchange rates of other currencies as they related to the inflation targeting objectives of other central banks.

Selling Dollars and buying Euros alongside a host of other currencies like Sterling, as well as those in central and eastern Europe, would lead to widespread Dollar declines that prevent the Fed’s mission to generate additional inflation over and above its 2% target from being scuppered.

In addition, selling the Dollar while buying the Euro would prevent the currencies of central banks whose economic and inflation outlooks are fragile - notably the likes of the Yen and Swiss Franc, among others - from participating in a race to the bottom against each other in order to depreciate.

Fragile currencies would likely remain weak or even soften further against the Euro, while rising or otherwise holding steady against the Dollar in price action that leads to virtuous trade-weighted movements for many, broad weakness for the greenback and acts as a stimulant for the global economy. 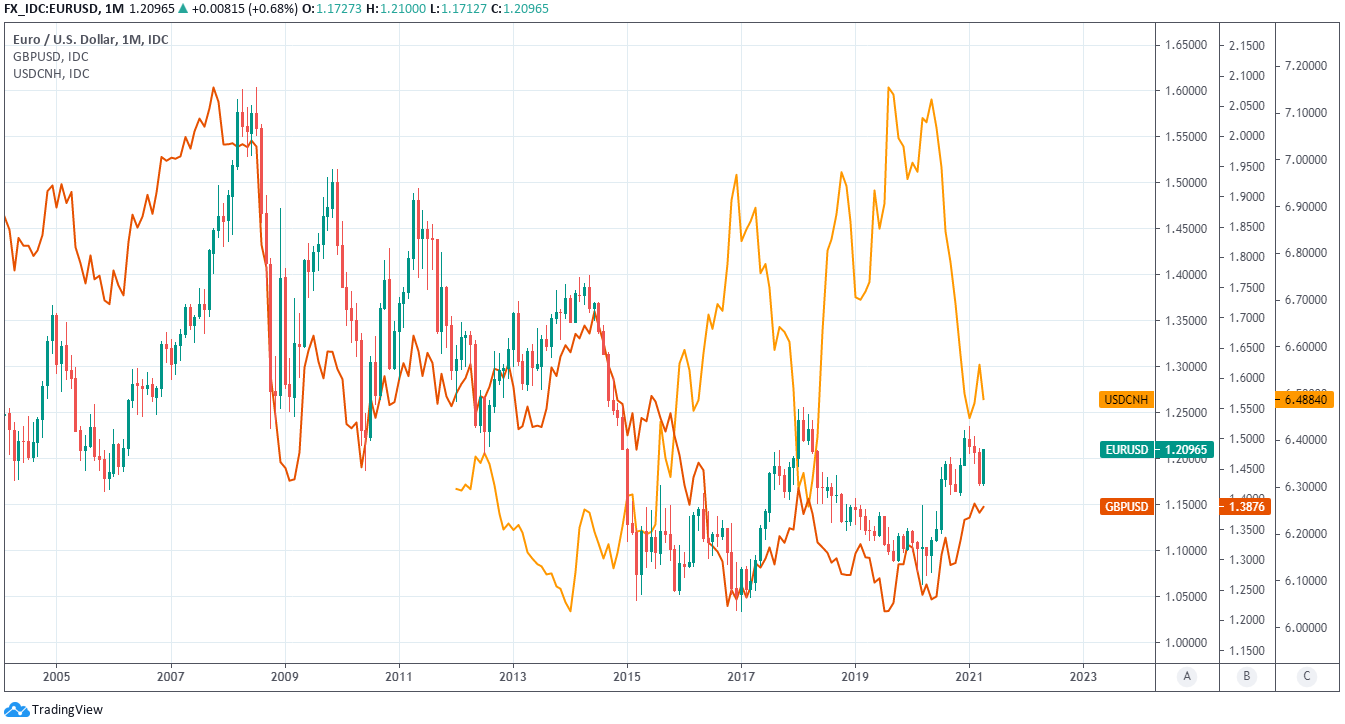 Above: Euro-Dollar at monthly intervals with GBP/USD (orange), USD/CNH (yellow).

The alternative would likely be unthinkable for a great many central banks as it would, partly through correlation effects, lead to very broad Dollar strength that must not be the most conducive to a global economic recovery and most notably any economic recovery in emerging markets.

This is why the author suspects the PBoC will be a big Dollar seller in the coming months as well as as a large buyer of the Euro and other currencies including the Pound, enabling the Renminbi to depreciate in trade-weighted terms against the Dollar.

That depreciation would appear misleading to some observers however, given its likely concurrence with a USD/CNH fall all the way to something like April 2018 lows of 6.33.

A USD/CNH fall to 6.33 would reflect a strengthening of the Yuan against the Dollar but, coming alongside a EUR/CNH rally near to 8.17, would actually be driving a trade-weighted Renminbi depreciation that was denied to it in January and the first quarter by Euro weakness.

Implied within those forecasts is a Euro-Dollar rally to 1.29 over the six months to the end of summer, which would reflect six year highs not seen by the single currency since before the European Central Bank announced its first quantitative easing programme in January 2015.

Offsetting these moves to some extent in the trade-weighted Euro complex would be declines in EUR/GBP among others, with the Pound-Euro rate rising to 1.20 and above as the Pound-Dollar rate reclaims pre-referendum highs somewhere between 1.48 and 1.50.