- EUR/USD hints at reversal with strongest gain for six-months
- After profit-taking European FX, carves out EUR/USD bottom.
- Choppy trading likely, with support at 1.17  and upside limited.

The Euro-to-Dollar exchange rate endured its strongest weekly advance since November last week but the recovery road is likely a long and winding one, implying choppy trading ahead for EUR/USD over the coming days.

The Eurozone's single currency lifted from lows near $1.17 in holiday trade on Monday to eventually overcome the 1.19 handle; it is found at 1.1890 at the time of publication on Monday.

Euro gains were the strongest since the week ending November 23 and the immediate aftermath of the U.S. election but came amid strong indications that they were mostly an act of profit-taking by investors who'd been spooked out of wagers against the single currency.

But the 1.1% Euro-Dollar rally had been flagged as a possibility by quantitative strategists at BofA Global Research, who advocated the Euro as their trade of the week for the period ending Friday, while previously technical analysts at Commerzbank had observed that EUR/USD was showing signs of bottoming out on the charts.

"So far the rally remains just a correction higher and failure in the 1.1950-1.2014 band will keep attention on the downside. Nearby support lies 1.1835 then 1.1704/1.1695," says Karen Jones, head of technical analysis for currencies, commodities and bonds at Commerzbank.

To the extent that last week's rally was an act of profit-taking it suggests both that EUR/USD has bottomed, but also that there isn't necessarily much upside left short-term.

There's plenty to suggest that it was, which indicates that a change of trend and potentially some choppy trading in advance of that could now be in the pipeline.

Above: Euro exchange rate quotes and performances over various timeframes.

Though the Euro advanced handsomely against the Dollar last week, its largest gain actually came from Sterling which supports the idea that the rally was more the result of investors growing reluctant to continue betting against the Euro than it was the beginning of a more protracted move higher.

"With the EU Recovery Fund stuck in a German courtroom, the EUR re-rating story may have to wait," says Chris Turner, global head of markets and regional head of research at ING. "Higher US yields look set to force EUR/USD back down to 1.1800 again. The only bullish argument we can see for EUR/USD this week is a case for strong 2Q US data being already fully priced and traders wanting to jump in early on the EUR recovery story – more signs of which should emerge through the quarter."

Some of the Euro's strongest gains came on Tuesday when Bloomberg News reported that a sharp pick-up in vaccinations is in the pipeline while the single currency was volatile on Wednesday after Dutch central bank Governor Klas Knot floated the possibility of a third-quarter tapering or phasing out of the European Central Bank's pandemic inspired quantitative easing programme (QE).

These factors may help to explain the Euro's lessening appeal as a "funding currency" despite the strengthening U.S. economy that has boosted U.S. bond yields just as the ECB's QE programme was crushing those in Europe.

The Euro was advocated widely as a "funding currency" from January, leading to widespread participation in a process that saw investors borrowing it with the intention of selling in exchange for currencies offering either higher yields, or simply better return prospects for other reasons.

"We suspect that a significant part of the recent EUR rally seems driven by a short squeeze that is particularly pronounced in the case of hitherto popular EUR-funded carry trades like shortEUR/USD,EUR/CAD and EUR/GBP," says Valentin Marinov, head of FX strategy at Credit Agricole CIB. "We maintain a cautious near-term outlook." 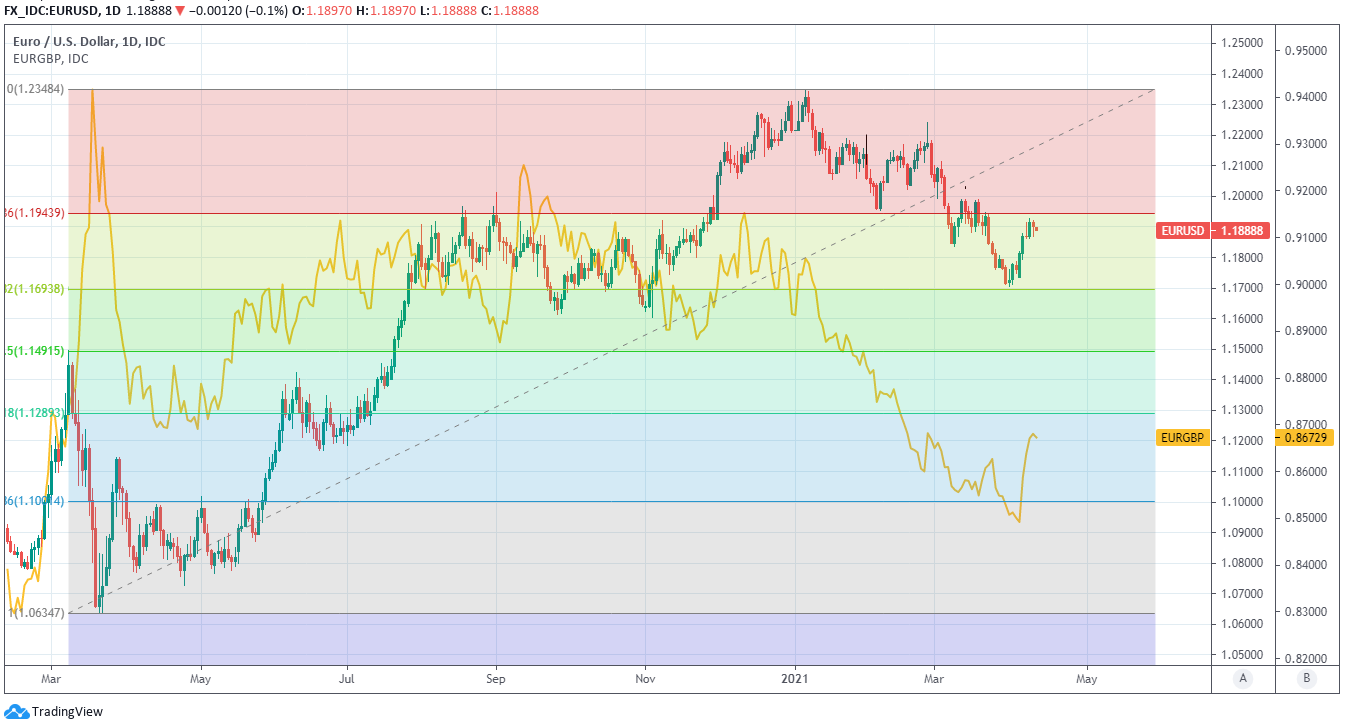 Above: Euro-to-Dollar at daily intervals with Fibonacci retracements of 2020 recovery and EUR/GBP (yellow).

Commodity currencies like the Canadian, Australian and New Zealand Dollars as well as Pound Sterling all benefited greatly from this and were all also found in retreat from the Euro last week as European currencies experienced a moment in the sun.

Incidentally, the BofA Octave Model withdrew the Euro from its basket of funding currencies last week, meaning it no longer advocates any 'carry trade' involving the Euro.

This is a supportive development, especially if it becomes a market-wide phenomenon, although many analysts say that further Euro gains would be premature at this stage.

"We judge that both seasonal patterns (a positive temperature delta) and a clear pick-up in the vaccine-pace through April and May could lead to a “pent-up” move in Euro area key figures," says Martin Enlund, chief FX strategist at Nordea Markets. "Whether this is enough to re-ignite the EUR positivity is another discussion, but it may postpone the next leg lower in EUR/USD until Q3? We remain long USD/SEK (but sidelined in EUR/USD)."

Analysts and economists have responded with scepticism if-not concern at the prospect of the European quantitative easing programme being withdrawn at such a stage, especially all the while there are delays to the availability of funding from the EU's €750bn recovery fund. The fund is the subject of legal challenge in Germany and with this potentially set to drag on for weeks or even months yet, it may be the case that the market is slow to actually buy the Euro-Dollar recovery as a result.

The domestic highlight of the week ahead for the Euro is an address from European Central Bank (ECB) President Christine Lagarde at a Reuters Online event scheduled for 15:00 London time on Wednesday, which takes place just hours after the release of key U.S. inflation figures that could also have a bearing on the Euro.

A range of economic figures are due out this week although many of them minor so more important for Euro-Dollar price action will be investors' appetites for the Dollar, incoming information about Europe's vaccination programme and any rhetoric relating to ECB monetary policy.

"EURUSD’s descent following the March break under support around the 1.20 level has started to show some signs of basing and reversing around 1.17, in line with expectations," says Juan Manuel Herrera, a strategist at Scotiabank. "Shorter-term trend oscillators are flipping to bullish, meaning the EUR should see decent intraday support on modest softness. Note that the daily DMI is also flipping to positive for the EUR. EUR gains are testing the base of the mid-March consolidation range (1.1890/1.1990) which may serve as a short term cap." 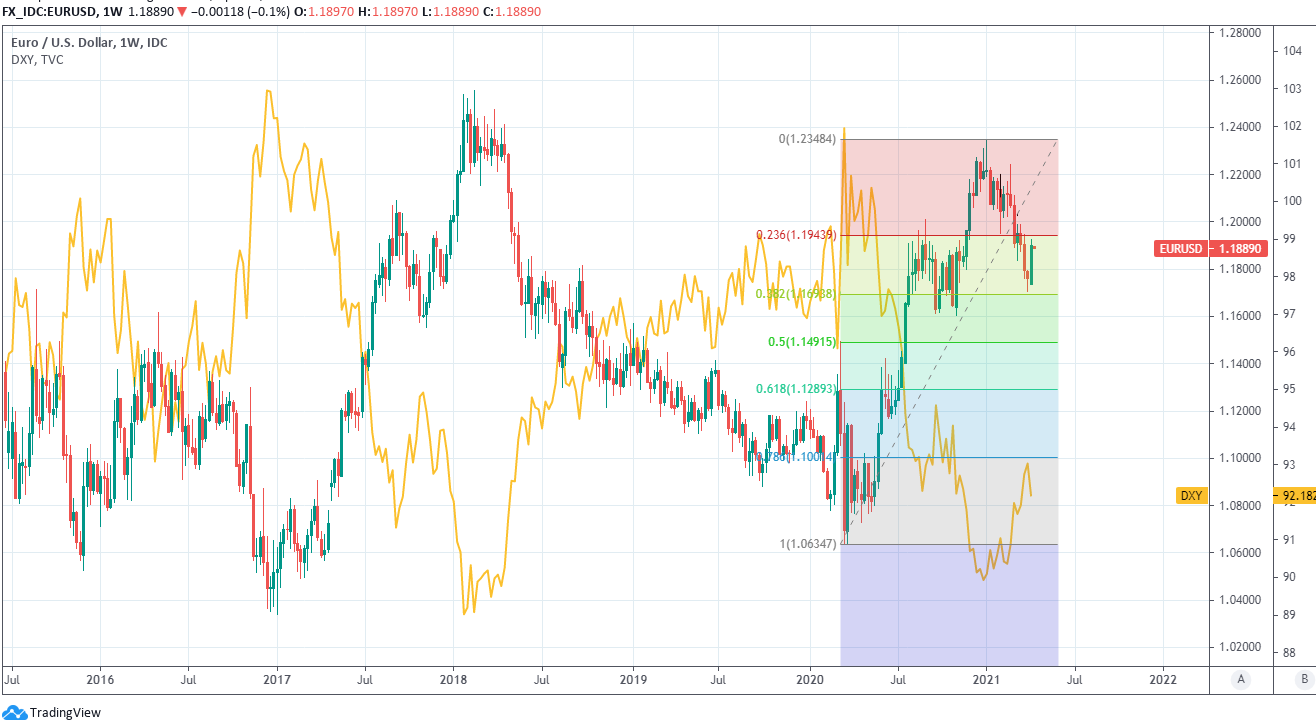 Above: Euro-to-Dollar at weekly intervals with Fibonacci retracements of 2020 recovery and U.S. Dollar Index (yellow).