Pound Sterling starts the new week with fresh losses against the U.S. Dollar, adding to the declines of the prior week.

The UK currency has been caught in a wave of profit-taking of late, but with the greenback showing signs that its broader rally is tiring the Pound-to-Dollar exchange rate could embark on a tentative recovery over the coming days.

Pound Sterling was the single largest beneficiary of February-to-April wagers against Europe's single currency, which investors expressed by selling EUR/GBP, and was accordingly the worst off last week when the market began an apparent rethink of those bets.

But to the extent that uncertainty about viability of the Astrazeneca vaccine for use with certain demographics played a role, the dissipation of this may also support the Pound as the dust settles this week.

"The UK government reiterated that its plan to offer the first dose to all adults by end July remains intact. This means that the constructive case for GBP remains intact and we expect sterling to recover fairly soon," says Petr Krpata, chief EMEA strategist for FX and bonds at ING. "After the sharp adjustment this week, GBP /USD screens meaningfully undervalued based on our short-term fair value. This (a) limits scope for further sterling fall; and (b) should help to facilitate some modest GBP rebound next week."

The Pound-to-Dollar rate ended the week around 1.3707 having found support during the Friday session around 1.3672, an area that has underpinned it previously on the charts and which coincides with the 78.6% Fibonacci retracement of Sterling's early January extension higher. 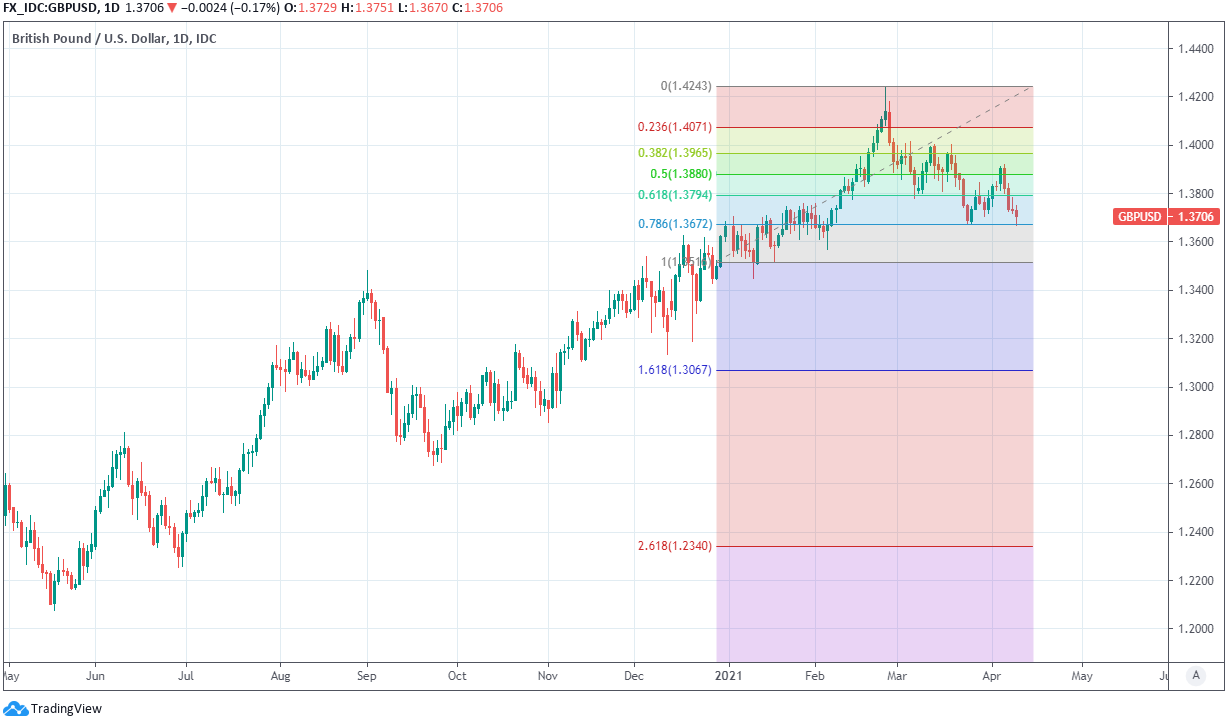 Above: Pound-to-Dollar rate at daily intervals with Fibonacci retracements of January 18, 2021 extension higher.

"Longer term (weekly, monthly) trend dynamics remain GBP bullish, which rather suggests softness is temporary and that investors should position to buy into GBP weakness," says Juan Manuel Herrera, a strategist at Scotiabank. "Net (DXY/BBDXY) losses on the week still rather favour the idea of the big dollar’s Q1 appreciation reversing from a technical point of view."

The Dollar was the third worst performing major currency last week but with little to distinguish between it and the commodity-linked New Zealand Dollar in what is testament to the choppy price action seen by all currencies. The period was marred by profit-taking in various currencies, which left price action appearing at odds with many recently popular ideas and trades.

Price action came as Dutch central bank chief Klas Knot floated the possibility of a third-quarter tapering or phasing out of the European Central Bank's (ECB) pandemic inspired quantitative easing programme (QE), and after the European Centre for Disease Prevention and Control (ECDC) said that continental vaccinations should pick up in the coming weeks.

While the U.S. vaccination programme is still going strong, the ECB's rhetoric came in contrast to the message from the Federal Reserve (Fed) and is potentially bearish for the Dollar as well as supportive of GBP/USD.

Much depends however on the outcome of this week's U.S. inflation data for March and pending series of speeches from Fed Chairman Jerome Powell.

"We think US data —particularly CPI— could be impactful for rates and broad USD direction," says Jim O'Sullivan, chief U.S. macro strategist at TD Securities. "The FOMC meeting minutes reinforced our view that Fed officials are in no rush for either tapering or tightening. Guidance remains outcome-based, not calendar-based, but officials continue to signal that they will be "patient" in assessing the data and will err on the side of starting the exit process late rather than early."

Minutes of the March Fed meeting cast policymakers as doggedly determined to leave interest rates at near-zero levels for what could be years yet, while entries relating to the quantitative easing programme indicated the bank is not even close to tapering off its U.S. government bond buying programme.

The Fed's stance reflects its new average inflation targeting policy in action, which is a headwind for the Dollar and more so in an environment where the ECB is contemplating an appropriate time to taper its own QE programme.

"What is most significant this week is that after a much stronger NFP print last Friday (916k versus 660k expected), the 10-year UST bond yield has declined marginally and the US dollar has weakened 0.8%,"says Derek Halpenny, head of research, global markets EMEA and international securities at MUFG.

All of this means the market is likely to pay close attention to Powell when he speaks about the U.S. economic outlook in a 60 Minutes interview at 12:00 am London time on Monday, though he appears again at 17:00 on Wednesday to address the Economic Club of Washington. 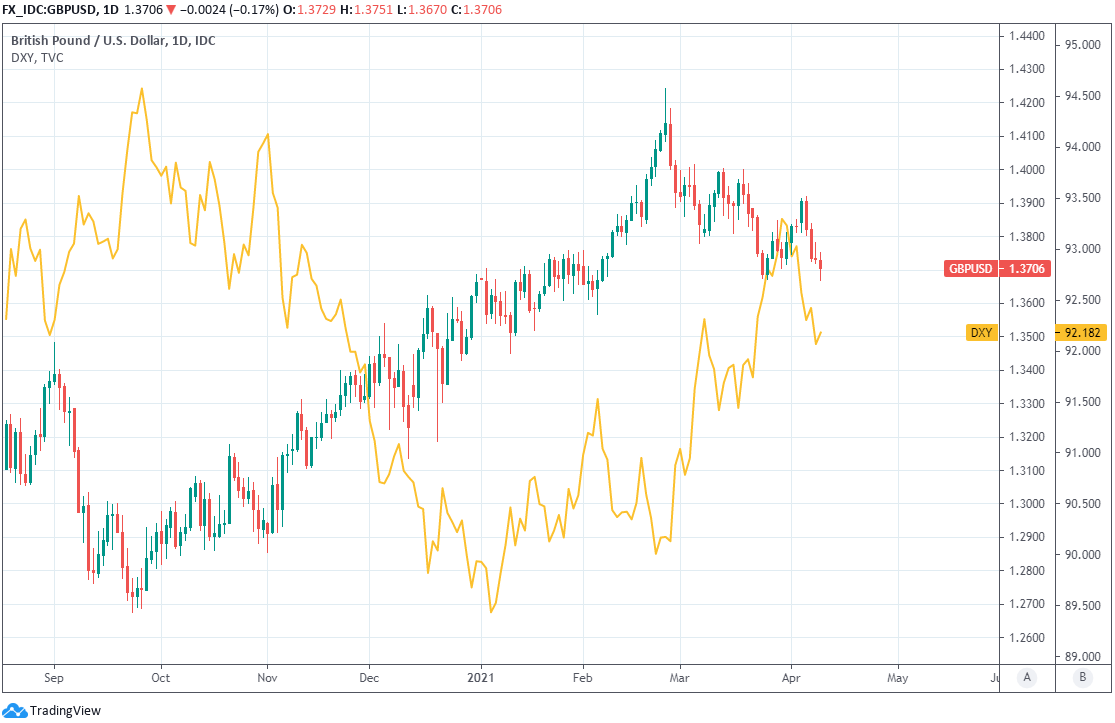 Above: Pound-to-Dollar rate at daily intervals with Dollar Index (yellow).

"Through much of March we argued in favour of further USD strength on the premise that optimism over synchronised global growth had worsened leaving the US dollar to out-perform. We sense some shift in that and there are early signs of improved optimism. That has prompted us to turn more USD neutral, arguing for a period of range trading ahead with offsetting macro dynamics," Halpenny says. "We have therefore closed our EUR/USD short trade idea but remain long GBP/SEK although that trade has gone against us."

In between Powell's two appearances, inflation data for March is out on Wednesday at 13:30 and consensus is looking for a  0.5% gain that month to lift the annualised rate over and above the Fed's 2% target to land on 2.5%.

However, economists see the more important rate of core inflation rising from 1.3% to only 1.6%, while Fed officials have repeatedly said that above-target inflation readings this year are likely to be "transitory" and that they won't be spooked by them into an early alteration of their monetary policy.

Meanwhile, and in the UK there's little significant data to influence Sterling after the February GDP number is released on Tuesday at 07:00, where the market looks for a 0.5% rebound to follow the -2.9% decline seen in January. It's not clear what impact this would have on the Pound given this period was one spent in 'lockdown' and the economy is expected to recover sharply through summer as supposedly-non essential businesses are allowed to reopen.

It's possible sentiment toward the Pound will be lifted by the first stage of that reopening this week, which sees bricks and mortar businesses permitted to trade from April 12, although it's been well telegraphed since long before now. 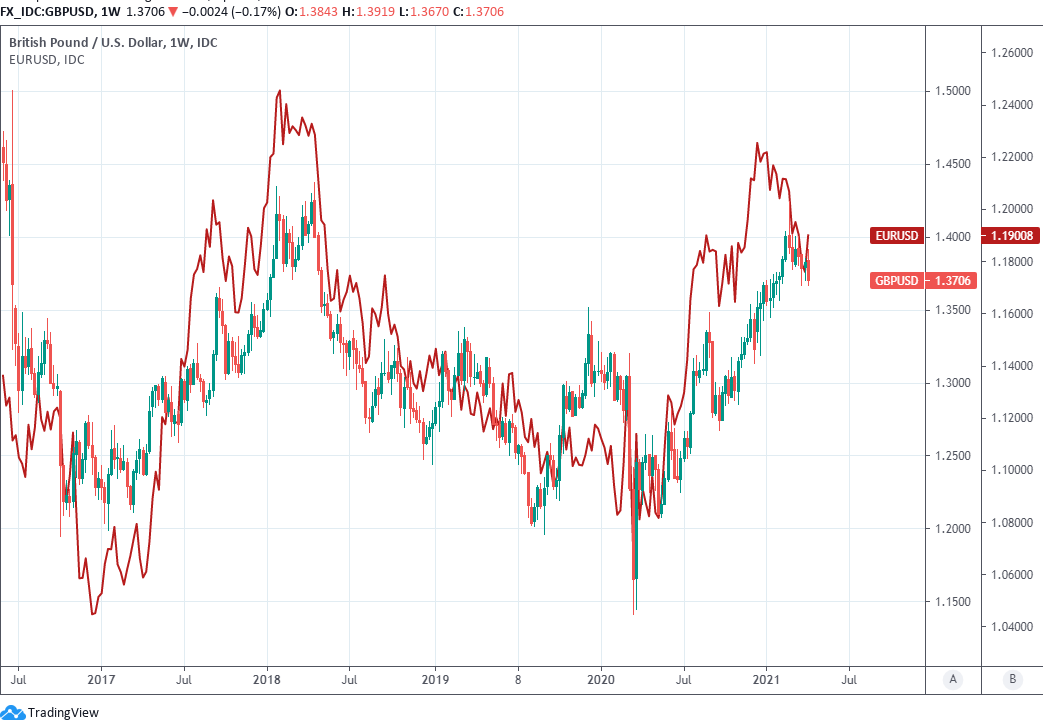