- EUR/USD looking to stabilise after bond market inferno.
- Has technical support around 1.1886 ahead of 1.1824.
- But faces long road to recovery following a stabilisation.
- Bond yields and ECB messaging key for EUR this week.

The Euro-to-Dollar exchange rate fell to three month lows last week where it could seek to stabilise over the coming days after an inferno in the bond market lifted the greenback and weighed on other currencies, although yields remain a threat to the Euro ahead of Thursday's European Central Bank (ECB) decision.

Europe's unified unit crumpled withmost other major currencies last week as U.S. and some other bond yields surged to pre-pandemic highs, upsetting stock and commodity markets in the process while inciting EUR/USD into a dip beneath 1.20 and then a fall to 1.19 on Friday.

Both are potentially meaningful technical supports upon which the Euro could attempt to stabilise this week, although much depends on developments in the global bond market where the surge in yields appeared to lose steam on Friday.

U.S. bonds were sold in a fire sale made worse by Federal Reserve (Fed) Chairman Jerome Powell who said on Thursday that the resulting surge in yields simply reflects U.S. economic prospects, indicating the Fed doesn't intend to come running to catch a falling market in the way some clearly hoped. 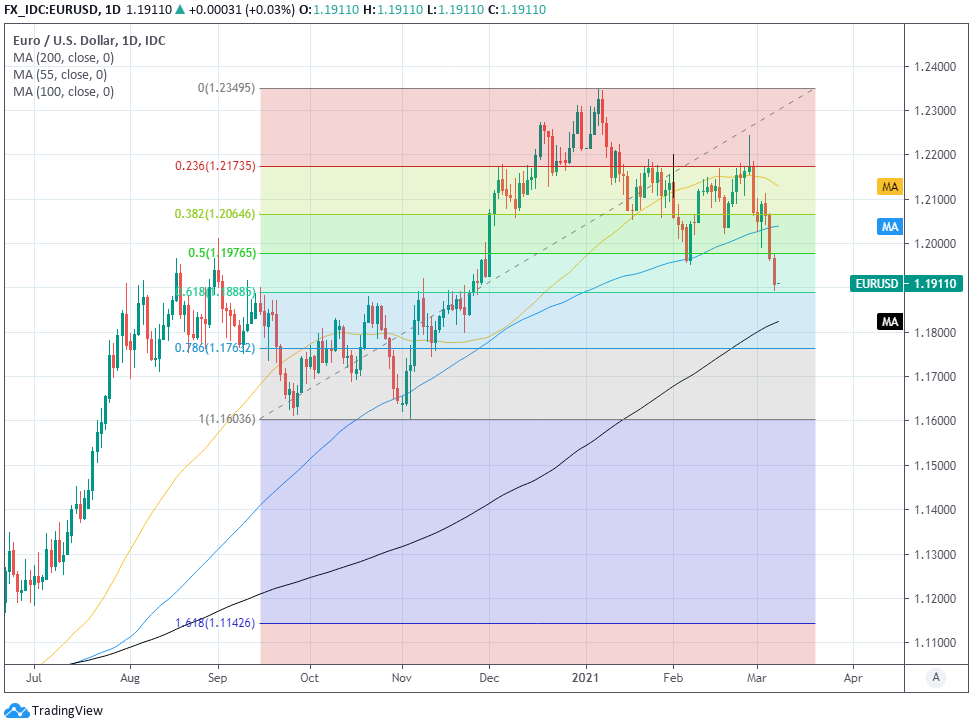 Above: Euro-to-Dollar rate shown at daily intervals with Fibonacci retracements of Nov 2020 rally and key moving-averages.

"Price action will likely follow bond markets in the near term (at least) while vaccine sentiment continues to weigh on the EUR," says Juan Manuel Herrera, a strategist at Scotiabank. "Intermediate resistance is 1.1950 followed by the 1.20 mark. The EUR’s losses are flagging oversold on the Bollinger charts and nearing the mark in the RSI."

Bonds could be sensitive to Wednesday's likely Congressional approval of a $1.9 trillion support package for households, firms and local governments, although markets have known about it for some time. Yields also already appeared to lose momentum Friday following a payrolls report that showed the economy creating almost twice as many jobs as were expected last month.

The Dollar as the best performing major currency last week but it's impossible for observers to say if gains reflect investors who've been drawn to it by improved yield and growth prospects, or if they're simply the result of profit-taking that was motivated by little more than global market volatility.

"The jump in US yields was finally enough to take out support at 1.1950 on Friday and until confidence emerges that Treasuries have sold off enough, a speculative market positioned reasonably long EUR/USD looks vulnerable," says Chris Turner, global head of markets and regional head of research at ING. "Failure to quickly reclaim 1.1950 on a sustained basis leaves EUR/USD vulnerable to a further drop to the 200-day moving average near 1.1825." 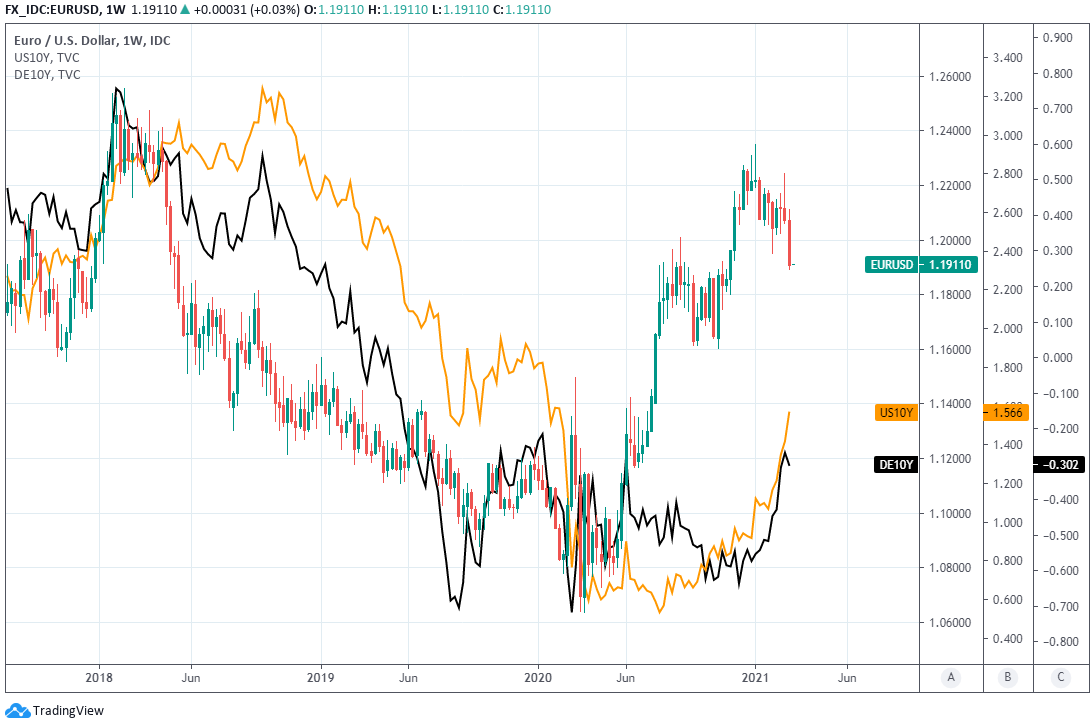 To the extent the Dollar has been lifted by profit-taking, the Euro could be quick to rebound as and when the temperature in the bond market cools.

"The ECB meeting is the most important calendar event in the week ahead," says March Chandler, managing director at Bannockburn Global Forex. "European yields should not be exaggerated. Italy can borrow 10-year for less than 75 bp, half of what it was on the eve of the pandemic, for example. Germany is still paid to borrow for 10-years (~-0.35%).  Portugal's 10-year bond yield trades inside Spain's. Look for good old-fashion jawboning and some strategic ambiguity from the ECB."

The highlight of the week in Europe is the ECB's policy decision which could see it attempt to put a floor under the Eurozone bond market, although it's not clear what impact this would have on the Euro given its varying responses to movements in domestic bond yields. The decision is due out on Thursday at 12:45 and will be followed by a press conference at 13:30.

"We expect the ECB to nudge up its forecast for inflation in 2021 and nudge down its forecast for GDP growth, but stress that inflation is still likely to fall short of the near-2% target over the medium term. With no prospect of any change to its policy settings, the focus will be on the Bank’s efforts to explain how and when it would step up bond purchases in response to rising bond yields," says Andrew Kenningham, chief European economist at Capital Economics. 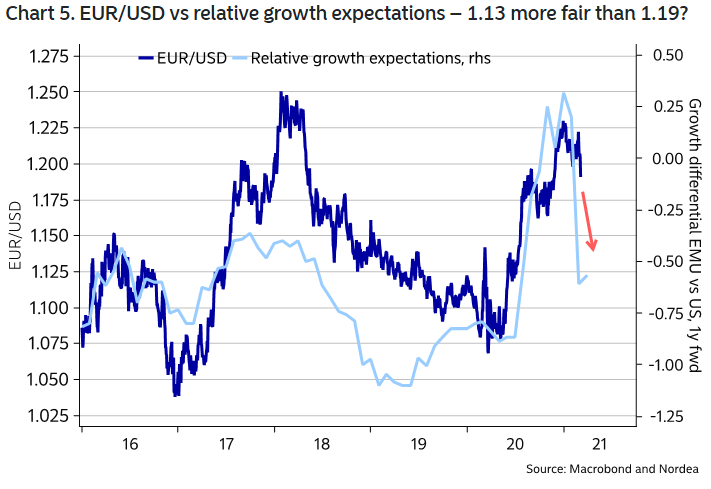 The Euro has been known in the past to benefit from ECB actions that reduce yields, especially where declines are felt more by highly indebted Mediterranean members, so it cannot be ruled out that a successful bid to put a floor under the market would enable Euro-Dollar to find its feet.

"With the ECB reinforcing its dovish stance and likely intensifying its bond purchases, we expect to see a reduction in EGB volatility along with a moderate correction in yields," Dr. Thomas Strobel, an economist at UniCredit Bank. "The EUR-USD slide below 1.20 remains contained ahead of the ECB meeting, but the extent of any pullback in the coming days depends on how President Christine Lagarde’s remarks are received by bond and stock markets."

One thing that may be a relatively safe bet is that the ECB is now less concerned about the trade-weighted Euro where back in January the bank had been fearing that last year's 10% EUR/USD rally would undermine its effort at fostering higher inflation, by making imported goods cheaper for Europeans to buy.  EUR/USD has since fallen -2.37% for 2021, while EUR/GBP has fallen -3.75% and EUR/CNH has declined -2.23%, meaning that more than 50% of the trade-weighted Euro has declined this year.

"Neither the trade-weighted EUR or rates pose a big problem for the ECB currently," says Martin Enlund, chief FX strategist at Nordea Markets. who targets a EUR/USD fall to 1.1750 over the coming weeks. "But what happens in coming months given i) growth boom, ii) inflation surge, iii) US liquidity surge, iv) perhaps end to SLR exemptions? EM FX could then trade markedly weaker, which would mean the trade-weighted EUR will be markedly stronger. Rates will be higher too. All of this would spell big trouble for growth and inflation in 2022. Given the relationship between EUR money market rates and PMI outcomes, one would suspect a -50bp rate cut would be in order." 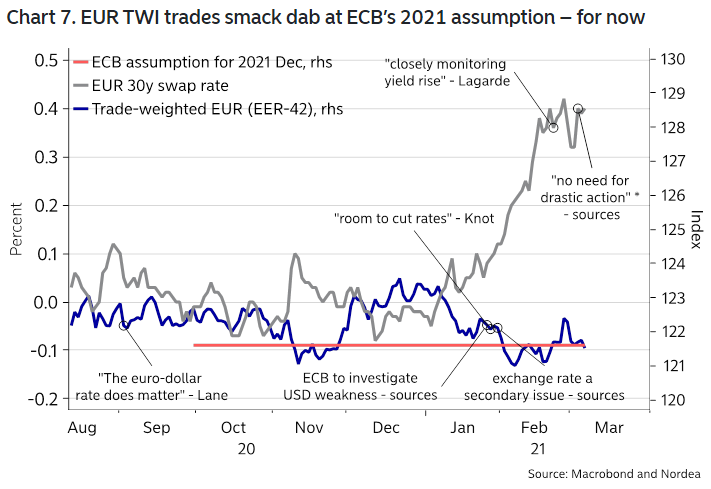