"The Dollar continues its fall from grace," says Francesco Pesole, FX Strategist at ING Bank. "The benign risk environment and positive outlook for the 2021 post Covid-19 recovery is inducing further flows out of the dollar."

A look at the Dollar's performance against the G10 shows that only the safe-haven Japanese Yen and Swiss franc have underperformed the Greenback, confirming a classic risk-on move that tends to hamper this asset class: 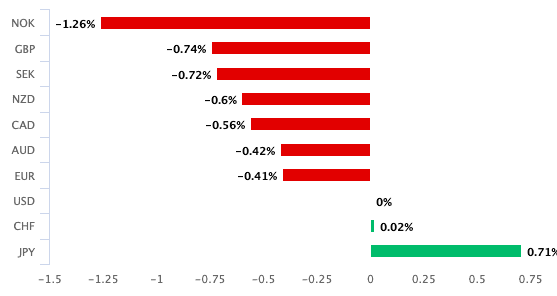 Above: A look at how the Dollar has performed over the past week. If you are concerned about recent FX moves, consider locking in current rates for use over coming months, learn more here.

Stocks were bid to new highs on Tuesday in the atmosphere of improving sentiment, with some follow-through seen extending into the mid-week session. The Dow Jones - a bellwether of the 'traditional' U.S. economy - rose to a record 30K, with outgoing President Donald Trump taking time out to appear before the press to acknowledge the milestone being achieved.

"I just want to congratulate everybody. The stock market, Dow Jones industrial average just hit 30,000 which is the highest in history. We've never broken 30,000. And that's despite everything that's taken place with the pandemic," said Trump. "That's a sacred number, 30,000. Nobody thought they'd ever see it."

It appears Trump himself could be behind some of the market's optimism, although not for the reasons he would hope for.

"The reason behind the surge was President-Elect Biden officially beginning his transition period, finally. Michigan and Pennsylvania certified Biden’s victories," says Marshall Gittler, Head of Investment Research at BD Swiss Group. "The head of the General Services Administration (GSA) reluctantly acknowledged he was the winner, freeing up a variety of government resources for the incoming administration. That eliminates the lingering political uncertainty in the US and will make the transition smoother."

Trump said on Tuesday he would commit his administration to handing over power to Biden's team, even though he said the fight against the result would continue.

The current rally does also appear to have some grounding in news of Biden's picks for the new administration, with markets apparently welcoming of some familiar names.

"The market was also relieved to see Biden’s choice for various posts – so far he is appointing competent, experienced people, not industry lobbyists and campaign donors. In particular, expectations that Biden would appoint the dovish former Fed Chair Janet Yellen as Treasury Secretary boosted confidence that the fledgling administration’s fiscal authorities would coordinate well with the Fed to emphasise reflation and rebuilding," says Gittler.

Markets rarely move in straight lines and a rebound in the Dollar and a fall in the value of equities is a possibility heading into the month-end period.

"Key near-term risks suggest upside USD potential into end-year. Virus infections have surged, both globally and in the US, within the backdrop of no new policy support, imparting downside risk to the economic recovery and risk appetite," says Randol. "We suspect that markets are richly priced and vulnerable to disappointment."

In particular, Randol is wary of the lag between the good news of covid-19 vaccine successes and their deployment, which invites the potential for economic disappointment.

"We expect a decline in EUR/USD into end-year, rebounding to 1.25 next year as the global recovery gains momentum and risk-seeking extents USD undershoot," says Randol.

However, the overall consensus amongst the analyst community is that the Dollar will likely underperform in a world that is ready to recapture lost growth.

"We can also discern in the market evidence of hope for the 'light at the end of the tunnel' – that the three successful vaccines announced so far would free us from the lockdowns and other restrictions and economic activity would return to normal," says Gittler.

"EUR/USD is getting a boost from wider US dollar weakness and we expect the trend to continue this year, with the pair moving to 1.20 in December," says ING's Pesole.