-EUR recovers 55-day average, aims for retest of earlier highs.
-As stocks recover while USD remains under election pressure.
-But earnings season, U.S. stimulus talks, polls all risks to EUR.
-Week ahead could be pivotal for EUR/USD technical outlook.

The Euro-to-Dollar rate could look to retest its early September highs in the coming days during what will be a pivotal week for the outlook on the charts, although corporate earnings season, U.S. stimulus talks, election polls and coronavirus developments are all potential headwinds for the single currency.

Europe’s unified unit continued its September recovery last week, reclaiming its 55-day moving-average at 1.1799 on a closing basis Friday and making for three consecutive weekly gains, as stock markets climbed and the Dollar fell in what many analysts said was a response to mounting expectations of a Democratic Party ‘clean sweep’ in November’s U.S. election.

Polls have moved further in favour of the opposition candidate Joe Biden at the national level as well as in key swing states, lessening the perceived probability of a contested election and improving the odds of a large fiscal stimulus being delivered over subsequent months.

“We continue to expect the EUR to remain in a consolidation phase at higher levels ahead of the US election. The EUR’s recent loss of upward momentum brings some relief for the ECB although we still expect that policymakers will deliver further easing at next month’s meeting,” says Lee Hardman, a currency analyst at MUFG.

Mounting expectations of a Democratic Party victory have been bearish for the Dollar and bullish for stocks as well as the currencies that follow them. 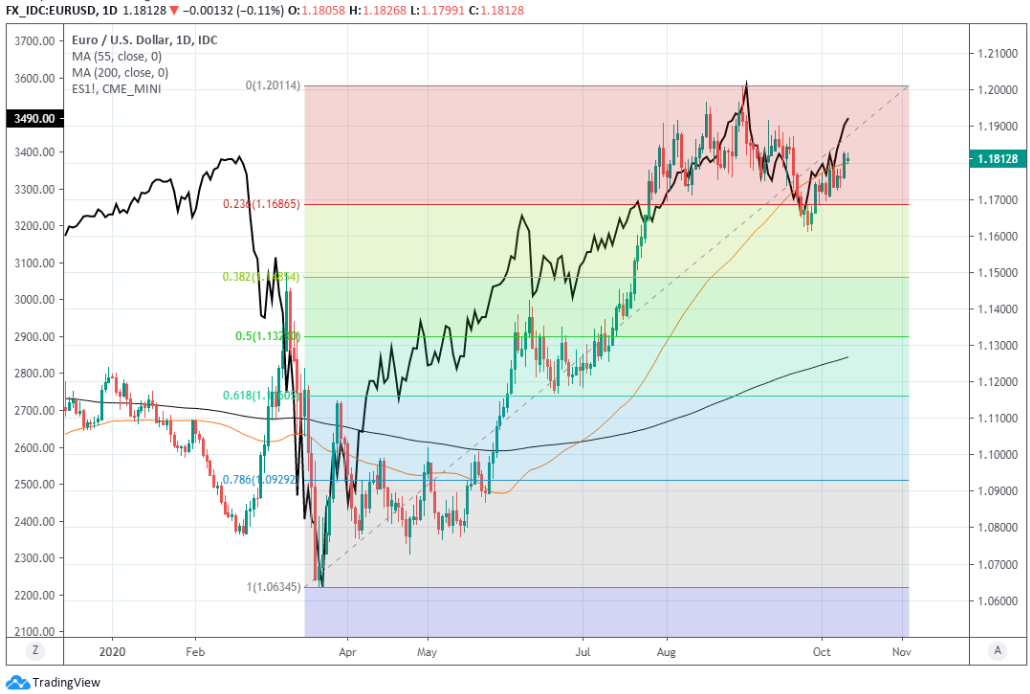 There's uncertainty about what America’s own answer to Jermy Corbyn style politics would mean for the U.S. economy and markets but for Europe the upside of a Democratic Party presidency is clear in that it would bring an end of trade tensions with the EU and reduce hostilities betweeen the U.S. and China, a key trading partner of Europe. In some ways, Europe's economies suffered more from the U.S.-China trade war than either of its protagonists.

However, ahead of the November 03 election and this week also the Euro will have to navigate multiple pitfalls including changes in opinion polls that are in favour of the opposition but at extremes, the beginning of corporate earnings season and ongoing fruitless negotiations aimed at delivering renewed financial support to U.S. households.

"Trump’s complete U-turn on fiscal relief has reignited USD downside. A broad fiscal aid package remains more probable than not, even if after the election. If anything, a blue wave election outcome - increasingly likely according to polling trends - would tip the scales toward a larger and more comprehensive fiscal relief package, accelerating USD downside," says Richard Franulovich, head of FX strategy at Westpac. "A broad mix of US data has underwhelmed so far in October; personal income, Markit’s manufacturing PMI, ISM manufacturing, non-farm payrolls, factory orders and jobless claims. That has prompted a decisive turn in our US data surprise index."

Reporting companies this week include J.P. Morgan, Citigroup, Bank of America, Goldman Sachs and Morgan Stanley. The S&P 500 some currencies including the Euro will be sensitive to positive and negative surprsises.

Coronavirus developments in Europe will also be key this week, given recent tightened restrictions on activity in a number of major economies including France, Germany, Spain and the UK. Rising numbers of positive tests have gotten governments flexing their regulatory muscles, with new restrictions now hampering the economic recovery.

"The EUR is indeed participating in the global reflation story (steeper yield curves – particularly in the US) and it will probably take a loss of confidence in the global recovery, rather than ECB rhetoric, to turn EUR/USD lower," says Chris Turner, global head of markets and regional head of research at ING. "The biggest challenge probably comes from whether European lockdowns broaden (Israel is the only country to see a second national lockdown). For the time being, we prefer EUR/USD to stay supported.” 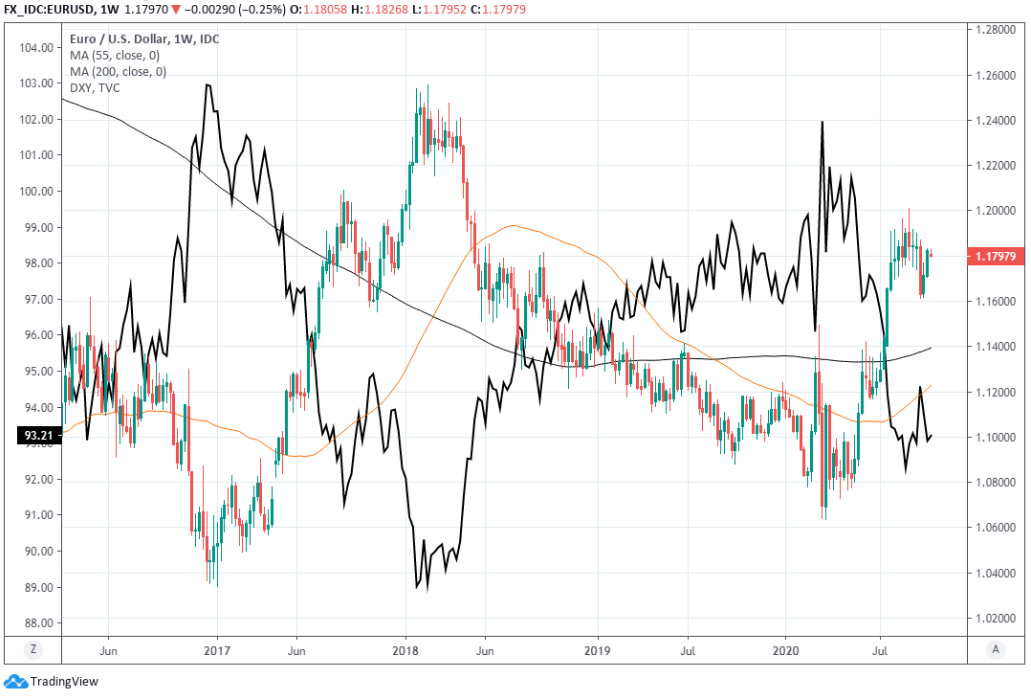 Politics, earnings and coronavirus developments are colliding at a pivotal time for the Euro outlook on the charts.

“Intraday Elliott wave counts are contradictory and suggest the market will struggle ahead of 1.1845/61, but while above 1.1695 we cannot rule out recovery to 1.1870 then 1.1971 and then 1.2014/15. For now we will tighten stops on long positions,” says Karen Jones, head of technical analysis for currencies, commodities and bonds at Commerzbank.

Jones bought the Euro last week and intends to hold onto the position, targeting a move up to 1.1915 initially followed by 1.20, although she has a stop-loss at 1.1725 and will walk away from the trade if the market falls back to that level.

Europe’s single currency reclaimed its 55-day average late last week but had previously eroded the 23.6% Fibonacci retracement of its 2020 recovery rally so whether the Euro turns lower or continues higher from here will impact significantly on the outlook for the technically-orientated.

“EURUSD still needs to see a close above its 55-day average at 1.1798 to suggest the corrective setback is over and broader uptrend resumed,” says David Sneddon, head of technical analysis at Credit Suisse in an early Friday note to clients. “A close above 1.1798 though remains needed to see bullish pressure return again with resistance seen initially at 1.1808/12, then 1.1873/83. Above 1.1918 remains needed to be cleared for a move back to the 1.2011 high and eventually our 1.2145/55 long -held objective – the “neckline” to the early 2018 top – from which we would look for a fresh consolidation phase, which could potentially last some considerable time.”