Europe’s single currency was -0.07% lower for the week by the close on Friday but could build on that loss over the coming days, which will see the Euro navigating as many political risks as it does economic threats, beginning with Sunday and Monday elections in Italy.

Italians in nine out of twenty regions will head to the polls Sunday and Monday and in at least six of those there is a risk of the governing parties being ousted and opposition politicians installed following results that might prompt questions about the government's staying power.

“The elections in Tuscany will be closely watched given the long history of support for PD in this region. The centre-left and centre-right coalitions are polling neck and neck, 43% and 42% respectively. M5S, the largest party in the current national parliament, having secured 32% of the vote in 2018, is trailing in these regional elections, averaging just 9% of the vote,” says Alession Rizzi, a portfolio strategy associate at Goldman Sachs. “Even with a poor performance by the PD or M5S in the regional elections, it is not clear whether this would provide a clear trigger to destabilise the current government, given the incentives against early elections.”

Rizzi says a large defeat for the Democratic Party (PD) in Tuscany and Puglia might raise tensions among coalition partners, although there’s little the opposition parties can do to force an election. Italy’s PD received a drubbing in 2018 and was not a part of the resulting coalition.

Italy’s PD secured another seat at the governing table after striking a deal with the under-pressure Five Star Movement in 2019, helping the latter avoid a return to the ballot box when coalition partner League attempted to force an early election to capitalise on its rising popularity. Italians have since been lumbered with an unelected government and an unelected Prime Minister, and this week offers one of the first opportunities for them to respond.

"Italy remains the key political risk to watch. If the fragile coalition in Rome were to fall apart, markets may worry that new elections could sweep parties to power such as the Lega, which have occasionally toyed with Eurosceptic ideas," says Holger Schmieding, chief economist at Berenberg. "Voters have turned away in droves from the M5S. In addition the PD and M5S fielded a joint candidate only in one region whereas the parties of the right supported each other." 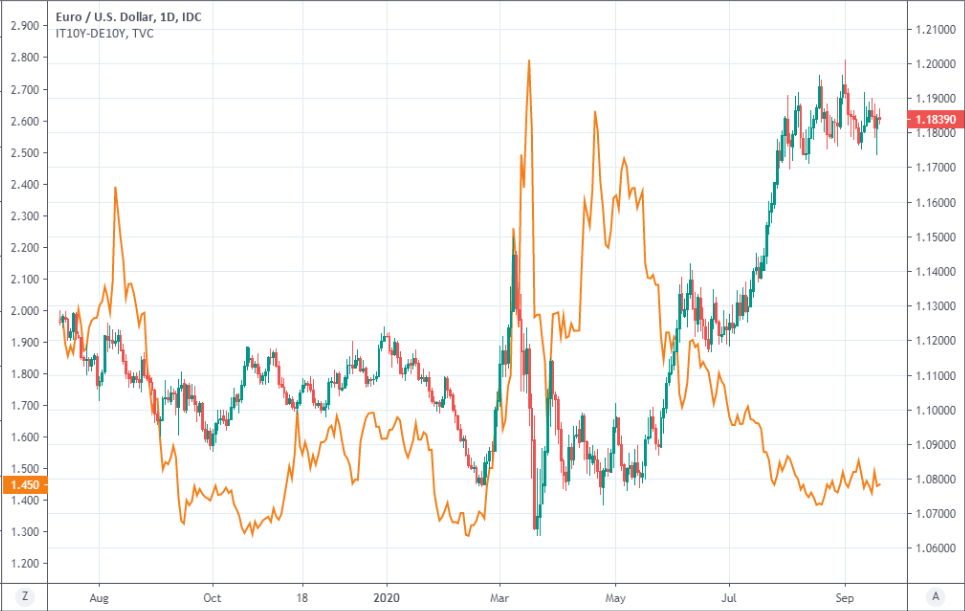 Opposition victories would hurt the Euro-to-Dollar rate if opposition victories undermine appetite for Italian government bonds and in the process, lead their yields to rise. EUR/USD has a negative correlation with the gap between Italian and German bonds yields, as shown on the chart above.

They might also challenge the widely held idea that Europe’s coronavirus recovery budget had put Eurozone breakup risk to bed, just as it emerges that monies from the fund will come with strings of austerity including the condition of further pension reforms. This would likely be controversial in Italy, although the next nationwide election is not until 2023.

“EUR/USD recently eroded the 4 month uptrend at 1.1826 and has seen absolutely NO follow through – but it also has not done enough to negate the bearish impact of severing an up trend and for now we will maintain a negative bias while below 1.1917. Initial support is the 55 day ma at 1.1714 and the 2rd August low at 1.1695. Should these be eroded, then there is potential for the March high at 1.1495,” says Karen Jones, head of technical analysis for currencies, commodities and bonds at Commerzbank.

Jones sold the Euro-to-Dollar rate at 1.1805 last week and says there's scope for a move down to 1.15 over the next one-to-three weeks or so after the Euro fell below an important technical level on the charts.

However, it's not just the charts and Italian politics which advocate a cautious approach toward the Euro.

“There are several sources of political uncertainty in the coming months like the Brexit negotiations and the US presidential election that could affect risk appetite and currencies,” says Richard Falkenhäll, a senior FX strategist at SEB. “We think the recovery beyond the strong Q3 2020 rebound is likely to be weak and the US presidential election may limit risk-taking during the coming months. The euro is unlikely to continue its strong rally in the short-term, with EUR/USD ending 2020 at 1.18, but the outlook for the next year is brighter.” 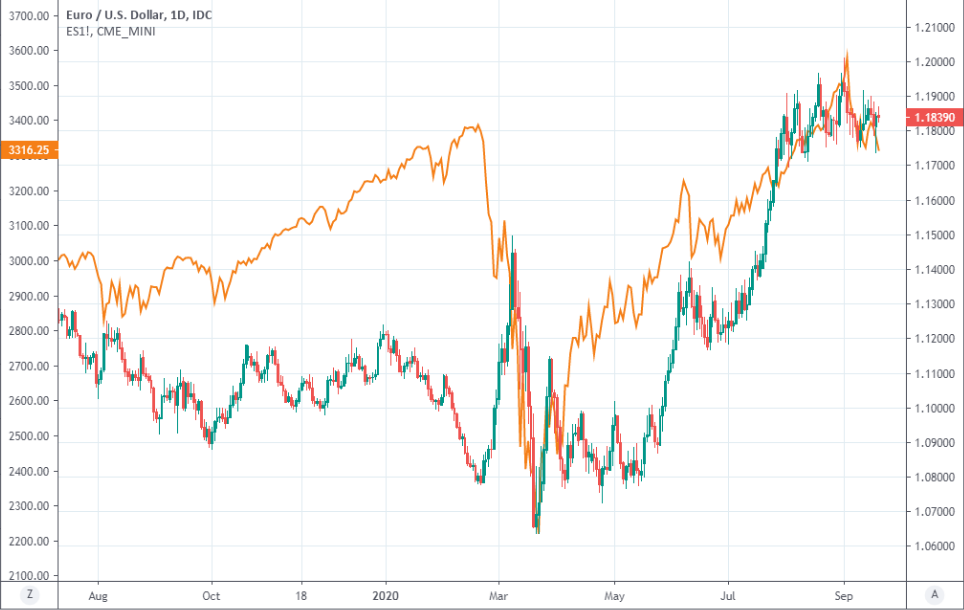 Election results will become known as a second coronavirus wave builds in the UK and Europe, threatening a return to ‘lockdown’ and a disruption of the economic recovery in some parts. The week ahead also sees Brexit trade talks continue and brings the U.S. election a step closer, which is important for EUR/USD because the Dollar has a long-established tendency to rise ahead of presidential elections as uncertainty about the policy outlook builds.

The Dollar has erased Trump from the charts so it and the Euro may be vulnerable to a pre-election rethink given both currencies are unprepared for any Trump victory, the prospect of which has been written off by investors.

“The election will be won and lost across Michigan, Wisconsin and Pennsylvania, where I spent the last few days escaping what can often feel like Washington DC's oppressive echo-chamber atmosphere," writes Jacob Greber of The Australian Financial Review. “A few things jumped out immediately. Many people across regional Pennsylvania - which Hillary Clinton lost four years ago by just 44,000 votes - still really, really like Donald Trump. They don't believe the media. And their trust in Trump is almost absolute, despite all the things that have been said and written about him. It's quite a thing to behold...Everyone has a view, one way or the other, about Trump. The fences must be lonely given nobody's sitting on them anymore.”

Polls have got opposition candidate Joe Biden winning in a landslide with good odds of the Democratic Party taking both houses of Congress on November 03.

But those polls didn’t give the incumbent any shot at all in 2016 and findings of some reporters on the ground suggest the vote might not be quite the done deal that currency markets suggest it is. Only time will tell the outcome o and whether the Dollar turns higher, and the Euro lower ahead of it.

“A clean sweep for the Democrats is currently priced as a 50/50 in prediction markets,” says Andreas Steno Larsen, chief FX strategist at Nordea Markets. “Our expectation of the USD entering a period of structural weakening, which is inevitable in order to achieve the average inflation target, and EUR/USD breaking through 1.20 sometime next year implies yet another leg down for USD/CNY. There is bipartisan support for a tough tone towards China in the US Congress, so we do not buy into the idea that a Biden administration will unwind US tariffs on Chinese imports. But Biden will almost certainly be more predictable than Trump. The reduced policy uncertainty followed by a Biden win alone would be CNY-positive.” 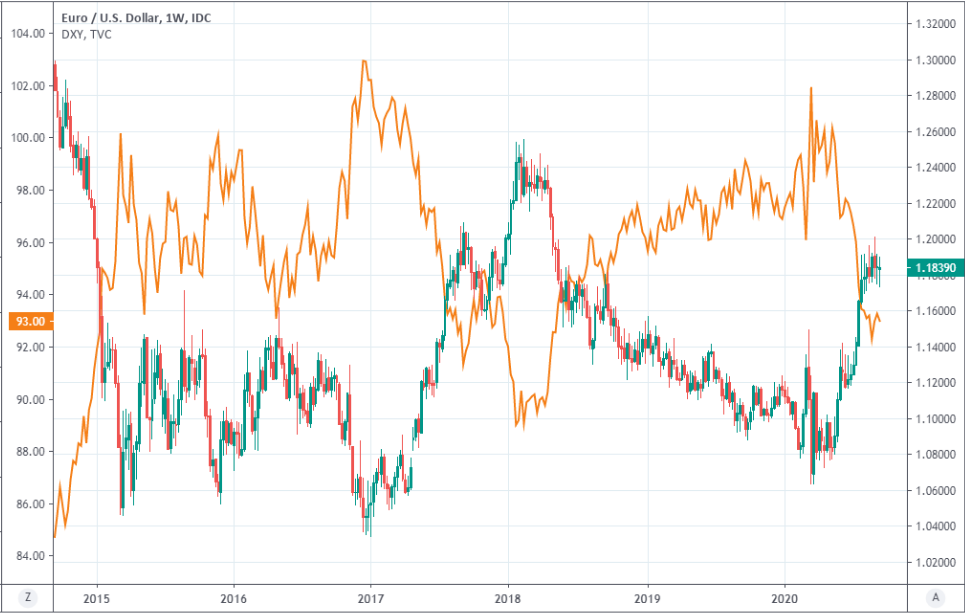 Another factor that could impact the Euro in the week ahead is price action in the Chinese currency, which was wobbled late last week by Washington’s moves to ban two Chinese technology companies from operating in the U.S. If this or other actions lead to renewed weakness in the Yuan then the Euro might follow it lower as they often move in tandem.

“The key focus in the week ahead will be an update on the September confidence readings through the flash PMIs and the German Ifo,” says Petr Krpata, chief EMEA strategist for currencies and bonds at ING, who looks for a EUR/USD range that spans the gap between 1.1756 and 11950 this week. “These data releases are on Wednesday and Thursday. If the EUR can survive these (the soft $ trend suggests it can) then the market moves onto the EU summit (24-25 September).”

Beyond the political and virus-related, IHS Markit PMIs, September’s Ifo survey, an EU summit and a series of speeches from Federal Reserve Chair Jerome Powell will also be scrutinised.

"The FOMC outcome was broadly as we expected. The DOTs was the main tool of communication. However, the lack of urgency on show to lift inflation we believe will limit the appetite for renewed selling of the dollar. We remain in consolidation mode with a EUR/USD range of 1.1600-1.2000 set to hold over the coming months," says Derek Halpenny, head of research, global markets EMEA and international securities at MUFG.

The Fed’s Powell left investors disappointed last Wednesday by a lack of additional policy support and after giving the impression that America’s central bankers were not as concerned about the outlook as many expected, so there’s a chance he could try to correct the market’s perception this week with adverse consequences for the Dollar and positive implications for the Euro. Powell will commence a speech between 15:00 and 15:30 each day of the week until Friday while PMI surveys are out Wednesday morning and the Ifo Thursday. 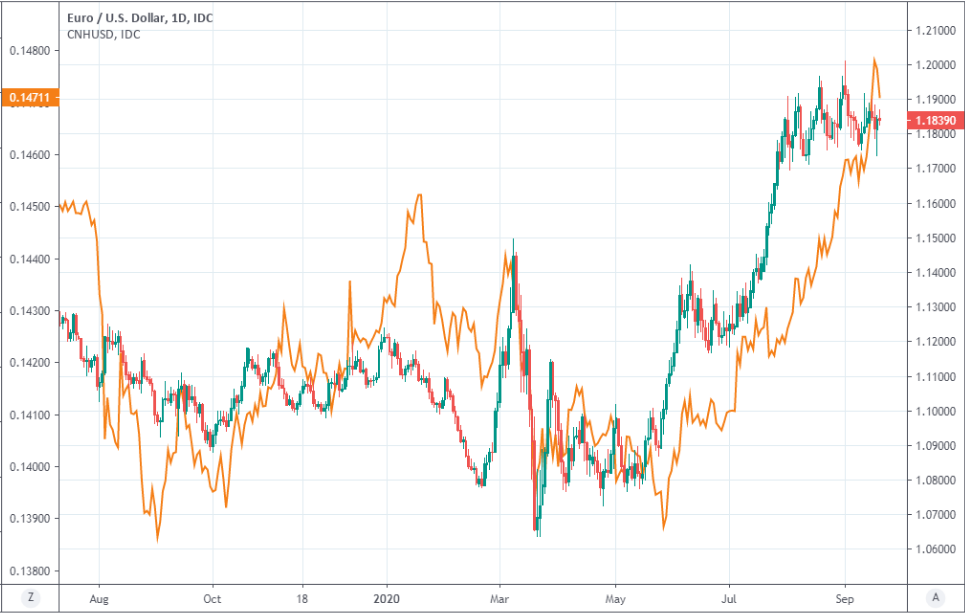