The Federal Reserve used its September policy announcement to upgrade some of its forecasts for the U.S. economy but strongly implied that it’ll likely be a very long time before the Federal Funds rate is lifted from its current 0%-to-0.25% range, confirming that ‘real’ U.S. bond yields could face further Dollar-negative declines in the years ahead.

“USD is generally building on the gains that came in the immediate wake of the FOMC announcements,” says Adam Cole, chief FX strategist at RBC Capital Markets. “The statement and press conference disappointed those looking for clearer signs of further stimulus, the Fed extending the dot plot forecast of unchanged rates out to end-2023, but going no further than that.”

Federal Open Market Committee voters now see the economy recovering all output lost to coronavirus containment measures before the end of 2021 and did not change their staple commitment to continue buying government and mortgage bonds “in the coming months...at least at the current pace.”

This may have come as a disappointment to some parts of the market and could have played a role in lifting the Dollar overnight as well as on Thursday.

"We blame 'crowded trades' and 'calendar anxiety' given that the next Fed rate decision isn't until after the November 3 US elections...We don't foresee sustained USD buying unless crude oil and the S&P 500 move sharply lower from here. The 'safest directional play' for a weaker USD is probably in USDJPY...pairs like USDCAD and EURUSD still look range bound," says Stephen Gallo, European head of FX strategy at BMO Capital Markets. "It's that pesky issue of 'sovereignty' that is stopping the ink from hitting the paper. We're convinced there will be a deal, but the issue of timing is the biggest element of uncertainty. We don't think its unreasonable to have some downside exposure to the GBP as the drama continues; but it's probably best to avoid the USD leg." 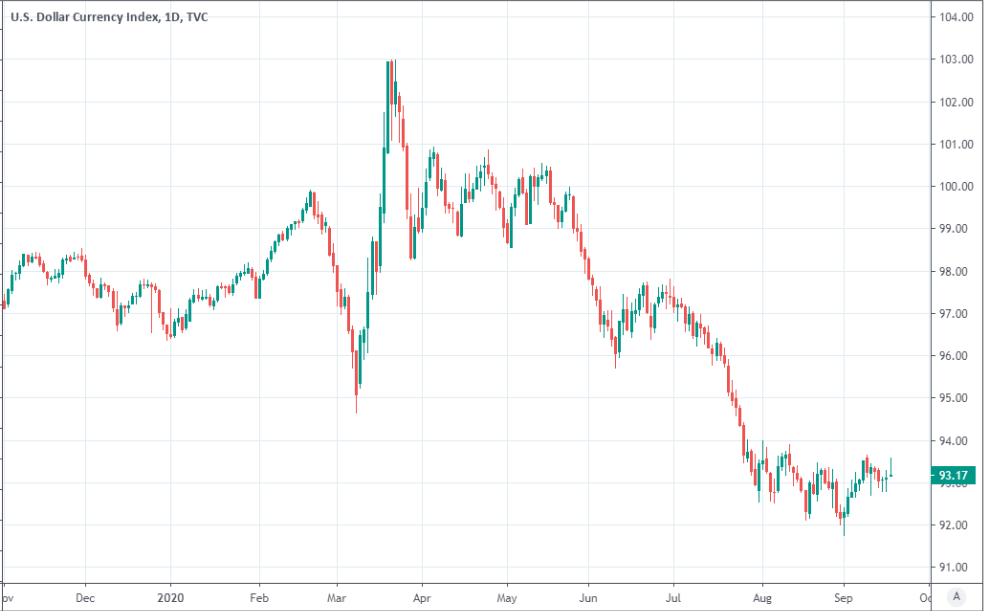 “The key takeaway from the economic projections is that core PCE inflation is not seen returning to 2% until 2023 – and had to add a year to the forecast horizon just to get this in. The Fed is just shooting in the dark here and has no clue about where inflation will be,” says Neil Wilson, chief market analyst at Markets.com. “It’s also got to the point of no return in as much as there is no more it can really do without spiralling into the abyss of negative rates.”

The Fed made no commitments that were not anticipated in September but did for the first time provide clarity on the kind of context in which it would eventually lift American interest rates off the floor, using what economists describe as “outcomes-based forward guidance.”

With this guidance Fed officials have promised a brave new world in which borrowing costs remain at zero for a considerable period of time and even after inflation has itself risen above the Fed’s target of 2% price growth.

“While the dovish forward guidance wasn’t sufficient to trigger further US dollar weakness in the near-term, it will continue to place downward pressure on the US dollar in the coming years by helping to anchor nominal yields and encouraging higher inflation expectations and lower real yields during the economic recovery. The Fed still has room as well to loosen policy further by adjusting their QE programme which was left unchanged overnight,” says Lee Hardman, a currency analyst at MUFG. 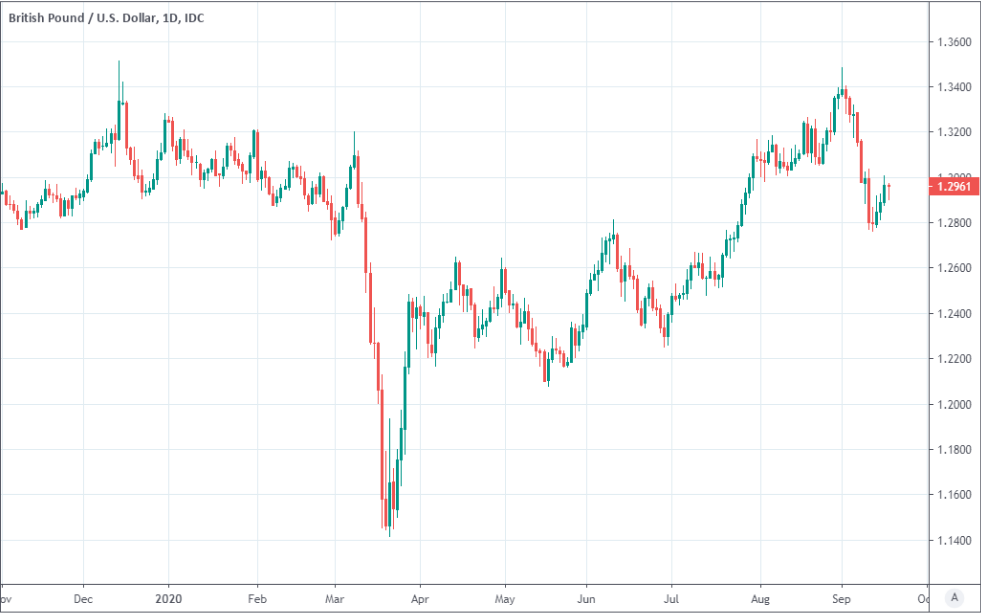 Fed rate setters are saying they will not lift American borrowing costs, which have an impact on global borrowing costs, until the economy has reached whatever highly subjective and ever-in-flux definition of “maximum employment” is in play at the time, in addition to inflation that is at  2% and “on track to moderately exceed 2% for some time.”

“This leaves the Fed with considerable room for maneuver, because they noted in their August 27 strategy paper that “maximum” employment can’t be precisely estimated. Moreover, “moderately exceed” and “for some time” are vague,” says Ian Shepherdson, chief economist at Pantheon Macroeconomics. “All three conditions have to be met at the same time before the Fed will move. In short, they plan to keep rates at zero until the pool of available labor has run dry and inflation has been above 2% for more than just a few months...no one we know doubts this commitment right now, but Congress has just allowed the incomes of some 30M people to plunge by an amount equal to 4.5% of GDP, overnight, with the expiration of the enhanced unemployment benefits.”

The bank had for a long time been mandated to use monetary policy to ensure steady inflation of around 2% over the medium-term, with rate hikes intended to curtail rising inflation while rate cuts and quantitative easing were used to stimulate the economy into producing stronger price growth.

But in the post-crisis period the Fed failed for years to deliver 2%, with consistently weak price growth prevailing instead in what was a symptom of open economic wounds. But after having missed or undershot the 2% target for years, the Fed then raises interest rates in 2015 when the main inflation rate was still below 1% and the core-inflation rate was also below 2% because policymakers feared too great an increase of inflation over subsequent years.

“The new goals revealed that the Fed will place more importance on achieving full employment and tolerate a moderate inflation overshoot for some time thereby signalling that policy will remain looser for longer than normal during the economic recovery,” MUFG’s Hardman says.

It later transpired that inflation never spent much time at all above 2%, owing in part to declines in oil and other commodity prices, although the core inflation rate that ignores households’ energy and food costs did spend a meaningful period above the target even after a number of interest rate hikes.

Nonetheless, the Fed’s preferred measure of inflation rate - the core personal consumption expenditures price index - spent only two years at or above 2% in the decade and a half since 1995. This explains why the Fed intends to do things differently and will now not raise rates unless inflation is already at  2% and “on track to moderately exceed 2% for some time".

“For those who prefer something a bit more concrete in nature, the central bank’s accompanying projections reveal that most policymakers see those conditions as only materializing some time after 2023,” says Avery Shenfeld, chief economist at CIBC Capital Markets. “The most drastic change to the accompanying projections came via the addition of the 2023 forecasts, which show the fed funds rate still pinned down throughout the year. But, that’s not a unanimous view and could prove excessively dovish if the unemployment rate falls faster and inflation pressures rise slightly faster.”