The Euro-to-Dollar exchange rate edged higher on Wednesday and is likely to advance further in the months ahead, according to analysts at Westpac, who say the single currency is “not overvalued” yet and that European Central Bank (ECB) concerns about recent gains might be misplaced.

Europe’s unified unit lagged major counterparts in a global advance on the Dollar Wednesday, leading gains in EUR/USD to be accompanied by Euro declines against other currencies including other low yielders like the Japanese Yen as well as riskier prospects like the recently Brexit-stricken Pound Sterling.

The Euro has lagged many rivals ever since the European Central bank began to voice concern about appreciation of the Eurozone’s trade-weighted exchange rate, with the latest pushback coming from ECB chief economist Philip Lane, who contradicted President Christine Lagarde’s coolness on the currency.

Lane wrote in a blog post last Friday “the scale of the upward revision in core inflation has been significantly muted by the appreciation of the euro exchange rate,” before saying the bank would continue to assess carefully the information coming in from the economy “including developments on the exchange rate.”

But Australian lenders have been quick off the bloc in giving short shrift to these concerns and the rhetoric that’s so-far successfully stymied a Euro-to-Dollar move back above 1.20, after having witnessed their own currency rise by 34.6% from March lows against the U.S. Dollar.

"The push back thus far has been lukewarm, for good reason - EUR is not overvalued," says Richard Franulovich, head of FX strategy at Westpac. "The rise in EUR/USD's fair value is mainly due to a less negative 10 year Bund-Treasury spread following the virus' outbreak (from around -200bp to -115bp) and tighter peripheral sovereign spreads following the landmark EU fiscal cohesion and joint bond issuance agreement." 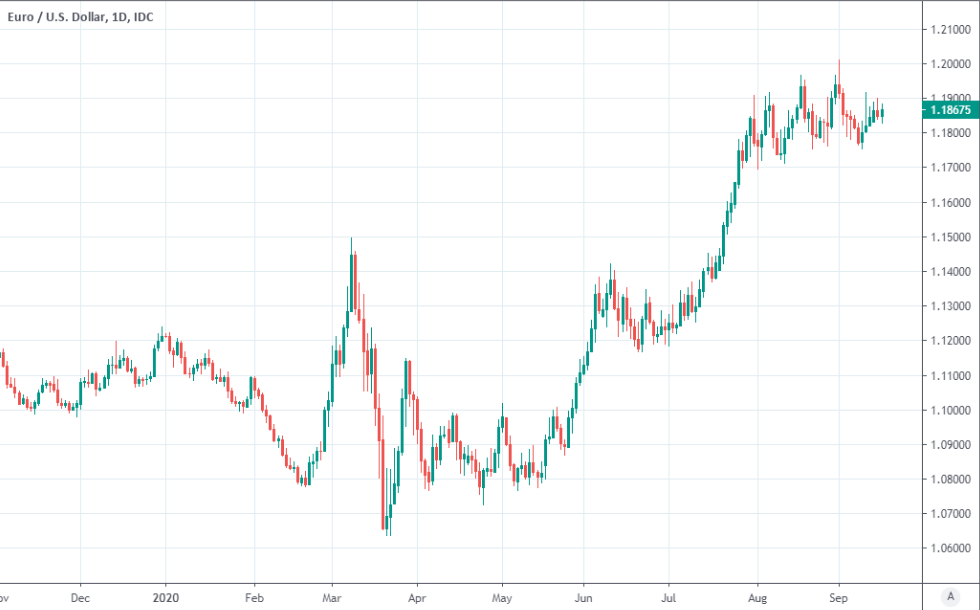 Westpac’s Franulovich says the inflation-adjusted measure of Europe’s trade-weighted currency - known as the ‘real effective exchange rate’ or simply REER - is still trading around its long-term averages and that this would only reach levels that could be considered “overvalued” with a EUR/USD rate near 1.30.

He says the ‘fair value’ of the Euro that’s perceived by financial models has actually risen in recent months due to declines in U.S. bonds yields and after German bond yields became slightly less negative at the same time, which has enabled the Euro to rise without putting pressure on the Eurozone economy.

The rising Euro threatens to cut import and consumer prices in an economy where inflation pressures have long been woefully inadequate, although similar is true of Australia where the Reserve Bank of Australia (RBA) has given up attempting to ‘jawbone’ the currency lower.

Westpac forecasts EUR/USD will end the year up at 1.21.

“EUR/USD has rallied by over 12% since bottoming‑out in March supported in part by positive steps towards Eurozone fiscal solidarity. Still, EUR/USD remains undervalued and vulnerable to more upside,” says Elias Haddad, a strategist at Commonwealth Bank of Australia. “The ECB’s indicator of harmonized competitiveness (based on consumer prices) suggests the euro real effective exchange rate can appreciate by roughly 4% before cancelling the Eurozone’s price and cost over‑competitiveness versus its top 19 trading partners. Meanwhile, the euro’s appreciation does not appear to be an immediate macroeconomic concern for the ECB.”

Strengthening currencies can also impair the competitiveness of exports and subsequently undermine the economy although this, as well as the exchange rate, only matter to the ECB and others to the extent that it prevents attainment of an ever-elusive target that’s typically to produce inflation of around 2%. 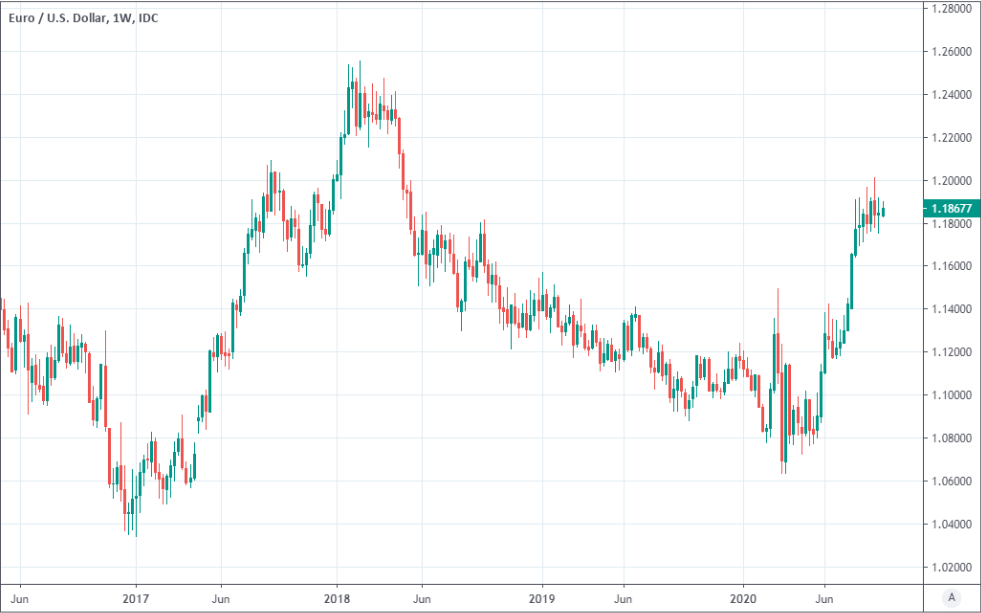 Westpac is just the latest Aussie lender to look for sustained Euro gains, with CBA advocating last week that clients buy the Euro around 1.1840 and target a move up to 1.26 in the months head, citing an “over‑competitiveness” of Eurozone exports relative to major trading partners.

CBA says this “over-competitiveness”, changes in U.S. and German bond yields and an improvement in the economic outlook resulting from the EU recovery fund are all factors that could help lif the Euro-to-Dollar rate over and above its estimated ‘fair value’ of 1.23 in the months ahead.

The bank forecasts a year-end finish around 1.24 but looks for levels as high as 1.26 in the interim. Meanwhile, economists at Canadian lender CIBC Capital Markets offered insight into why the Euro, Aussie and other currencies have seen such strong demand, which has occurred alongside a Federal Reserve-induced exodus from the U.S. Dollar that has left a tidal wave of highly mobile capital looking for a harbour to moor up in during recent months.

CIBC's comments came Wednesday and after Eurostat revealed the Eurozone enjoyed its third consecutive upside surprise in the blocs goods and services trade balance during July, with the surplus having risen to €20.3bn in seasonally-adjusted terms, up €16.0bn from the prior month.

“The market should at some point pick up on an important distinction in terms of the ability of different countries to live with a firmer exchange rate,” says Avery Shenfeld, chief economist at CIBC. “Most of the currencies that are gaining ground, including the euro, the Japanese yen and the Chinese yuan, are from countries that ran consistent trade and current account surpluses in the prior cycle, suggesting that their exports were sufficiently competitive. Canada, even during some of the stronger years for oil prices, ran an unbroken string of red ink in the trade and current account balance since 2008. Australia had moved into a current account surplus in 2019, and prices for its metals-weighted commodity basket have fared better in own-currency terms (up 4.5% in A$ since 2013) than Canada’s more energy-tilted export mix (down 15% in C$ since 2013).”