The Euro-to-Dollar exchange rate appeared to be swimming against a tide Tuesday as momentum ebbed from the market even after a the September ZEW survey, a widely observed barometer of sentiment on the Eurozone economy, surprised sharply on the upside.

The ZEW index that quantifies optimism about the six-month outlook for the Eurozone economy rose from 64 to 73.9 in September, when the consensus had looked for a fall to 63. Meanwhile, the index for Germany jumped from 71.5 to 77.4, surprising on the upside of expectations for a fall to 69.7.

ZEW, or the Leibniz Centre for European Economic Research, also reported that institutional investors and analysts became less downbeat about the current economic situation in both the Eurozone as well as Germany this month.

"The increase in the headline ZEW expectations index pushed the gauge to its highest since 1999, consistent with the increase in the Sentix. This is good news, also for the economy, but it stands in contrast to wobbly economic surveys and a sustained resurgence in the virus," says Claus Vistesen, chief Eurozone economist at Pantheon Macroeconomics. "It’s perfectly reasonable to ascribe high-flying investor sentiment to an iron-clad belief in the policy-put, though that now looks slightly off given last week’s signal by the ECB that further stimulus is not forthcoming, at least not in the very near term." 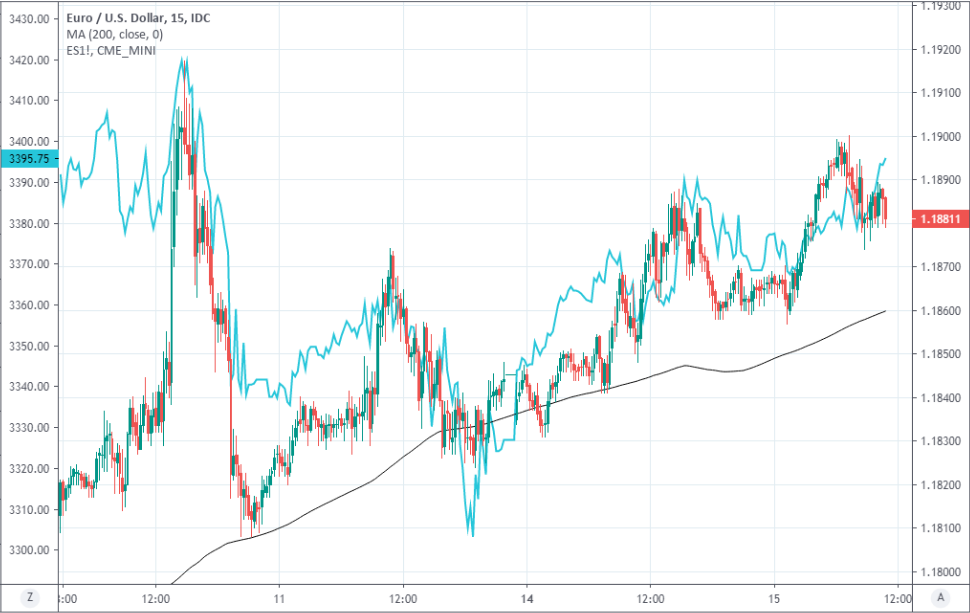 The institute’s widely watched polls of institutional investors and analysts has now risen strongly for sixth consecutive months, continuing its recovery even in the face of a second wave of coronavirus infections that’s swept the continent and prompted tightened restrictions on activity in some parts.

But the Euro didn’t derive any incremental support from Tuesday’s surprise. EUR/USD was already trading higher ahead of the survey, although momentum has ebbed from the exchange rate since the close of the Asia session, leaving the single currency trading as if it’s swimming against a tide.

“Our cunning (or not-so-cunning) plan is to sell the dollar at lower levels for a move in EUR/USD to 1.25 and AUD/USD towards 0.80. The (US) dollar is oversold in a world where (especially EM) growth risks remain significant and the US economy isn't really under-performing its European peers. To the extent that EUR/USD remains in a 1.1750-1.20 range, the plan is working. But as China allows the offshore yuan to rise, we're finding it heavy going,” says Kit Juckes, chief FX strategist at Societe Generale.

The Euro had risen overnight alongside the Chinese Yuan, after being lifted in the opening session of the week amid renewed speculation suggesting a coronavirus vaccine might not be too far off, although the Euro-to-Dollar rate was unable to hold for long above the 1.19 level.

Chinese industrial production and retail sales numbers released overnight Tuesday were stronger than was expected, with retail sales having risen 0.5% in August, the first increase of 2020. Chinese retail sales had continued to fall even after the country moved on from its own coronavirus epidemic, the end of which was overshadowed by the infection's spread elsewhere in the world.

"The move this week is a rare development, in that the CNY (and CNH) is strengthening more rapidly than other major currencies. What China’s intentions are here in taking its currency so much stronger versus the greenback are tough to discern, but its commodity buying binge means that it is paying less in CNY terms for its purchases and some tout that China is taking a tighter approach to stimulus than elsewhere to avoid bubbles in domestic asset markets," says John Hardy, head of FX strategy at Saxo Bank. "It may be behind the broader US dollar weakening in evidence ahead of tomorrow’s FOMC." 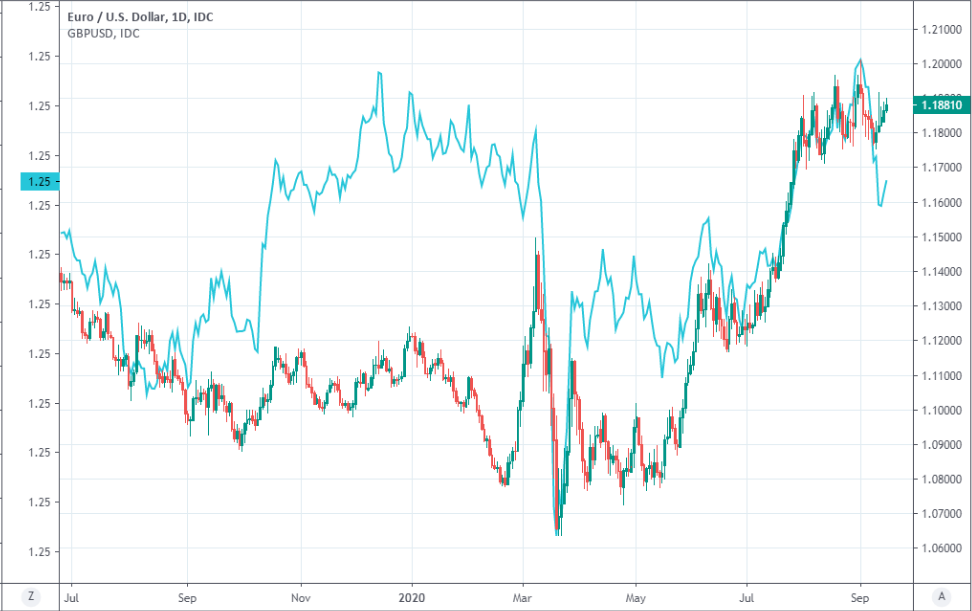 “Brexit is becoming a problem again for the EUR and EUR-betas. The ‘Internal Market Bill’ has a good chance of torpedoing hopes of some form of ‘skinny’ trade deal. That is if the UK Tories don’t split over the issue themselves. Still, there’s another month left before the UK-imposed deadline for some form of an agreement. Given the above, the risk rally (which has hit a snag this month) is on hold until positions are rebalanced. This is tactical for now – but it may extend if US data outperforms. As such, we’ve modified our views somewhat as we’re less enthusiastic about EUR/USD upside until positions are cleaned up,” says Bipan Rai, North American head of FX strategy at CIBC Capital Markets. “For the USD, the appropriate move is to take profit on USD shorts. The greenback is due for a tactical rally, but over the long-term, we’re still bearish. A move towards the 1.16-1.17 area in EUR/USD is due.”

Europe's single currency has struggled to sustain upward momentum since the European Central Bank (ECB) began to blow hot and cold on the subject of stronger exchange rates, saying on the one hand that it doesn't target the currency with its policy decisions and on the other, that rising exchange rates do have an impact on its ability to meet policy goals.

The Euro rally has become a policymaker focus just as Brexit begins to weigh on Sterling again and with the U.S. election barely two months out.

This combination of ECB currency concerns, a rising ‘no deal’ Brexit threat and looming U.S. election could all act like ball and chains around each ankle of the Euro-to-Dollar rate as it swims back toward the deep waters of 1.19 and above, potentially helping to solidify a ceiling that may have formed around 1.20 since ECB chief economist Philip Lane first spoke out against the currency.

However, the market remains convinced the Euro's medium-term prospects are bright and so any forthcoming retreat might ultimately be a short-lived one.

"EUR/USD has rallied by over 12% since bottoming‑out in March supported in part by positive steps towards Eurozone fiscal solidarity. Still, EUR/USD remains undervalued and vulnerable to more upside. EUR/USD fundamental value implied by price deflator differentials (purchasing power parity) is around 1.2300. Similarly, the ECB’s indicator of harmonized competitiveness (based on consumer prices) suggests the euro real effective exchange rate can appreciate by roughly 4% before cancelling the Eurozone’s price and cost over‑competitiveness versus its top 19 trading partners," says Elias Haddad, a strategist at Commonwealth Bank of Australia, who's a buyer of the Euro. "A near‑term risk to a long EUR/USD trade is a sharp unwind in the large build‑up in net long EUR speculators positioning."