Europe's single currency was higher against most rivals as investors sold Dollars against all but a handful of its largest counterparts on Tuesday, with the turn higher in the Euro-to-Dollar rate dating back to 15:00 Monday when the Institute for Supply Management (ISM) manufacturing PMI was released.

"Even if the PMIs in many countries, among others in the euro zone and the US, now signal much improved sentiment amongst corporates and service providers, we nonetheless urge caution not to become overly optimistic as a result, as the market currently does," says Antje Praefcke, an analyst at Commerzbank. "If infection numbers begin rising again globally now and restrictions are re-imposed in some shape or form practically everywhere all currencies would be back in the same boat...in the very short term we could have seen the lows in the dollar with EUR-USD touching the 1.19-mark."

Previously the Euro had been in retreat from the U.S. currency but a better-than-expected reading of 54.2 for the month of July deflated the Dollar and lifted riskier rivals like the Euro, which remained near to two-year highs on Tuesday amid increased caution about the outlook among analysts. The PMI was expected to rise from 52.6 to 53.6. 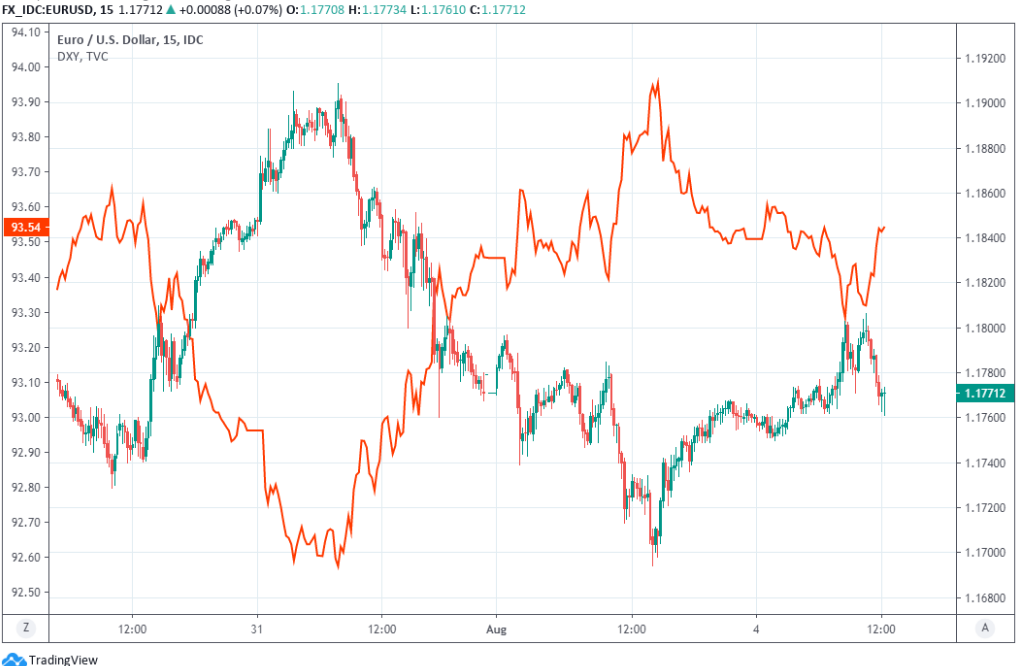 Nobody could say for sure why investors bought the Euro  following Monday's better-than-expected U.S. data although the figures do have positive implications for Europe given that a resurgent coronavirus was expected to hamper the U.S. economic recovery in July, and Europe's second wave has caught the attention of the market of late.

"New cases continue to rise in Germany and Belgium, thought their curves might be starting to ben; Belgium's outbreak is much worse. New cases in the Netherlands are still rocketing. The second waves appear to be cresting in Austria and Switzerland. Italy is the best performer, by far, with cases low and stable," says Ian Shepherdson, chief economist at Pantheon Macroeconomics. "New cases in Denmark and Norway - two of the earliest reopeners, with low infection and death rates - have jumped over the past couple of weeks but health authorities are mostly blaming outbreaks at meatpacking facility and on a cruise ship, respectively, rather than local transmission."

An unperturbed U.S. economy could mean that Europe, which many expect to outgrow the U.S. in the next year, will also see only a limited impact as a result of its own second wave. But Monday's data covered only a manufacturing sector that is far more insulated from 'lockdown' measures aimed at containing the coronavirus than the larger and much more exposed services sector.

"The danger in the short term, as Europe reacts to return of the virus and the US does better than expected as it spreads, is that the market narrative shifts. I expect a EUR/USD wobble and correction this month. But our forecasts for GDP growth in 2020/2021 look for Eurozone GDP to fall by less than the US," says Kit Juckes, chief FX strategist at Societe Generale. "The (not very cunning) plan, is still to buy the dip, and to look for a meaningful longer-term euro recovery." 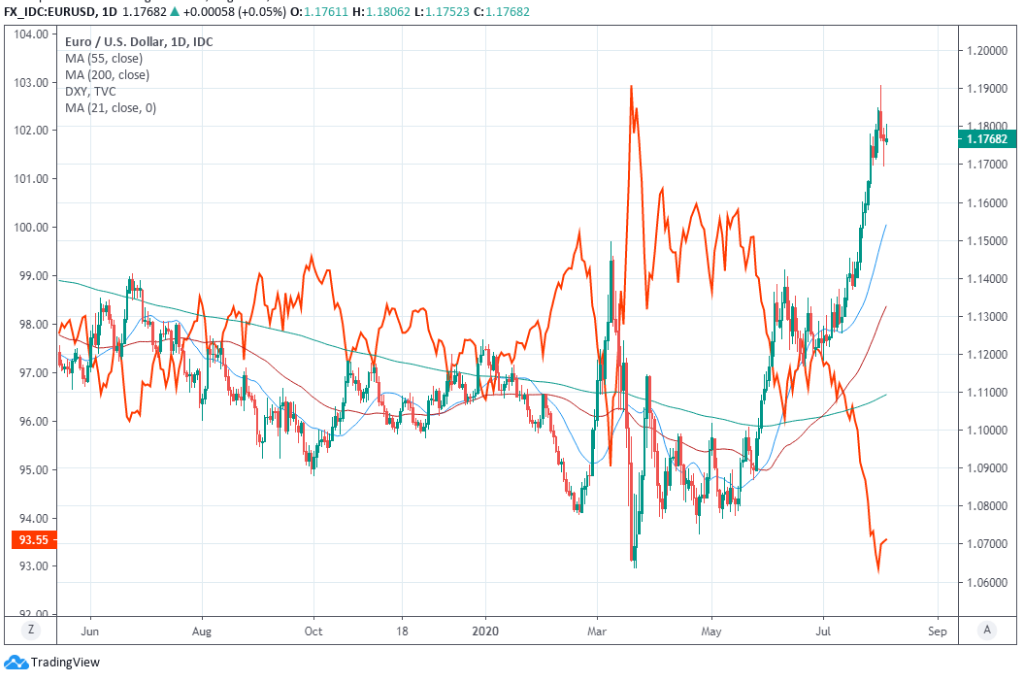 The ISM will release its non-manufacturing (services) PMI on Wednesday at 13:30 and a contradiction of Monday's message might upset the Euro as well as help to revive the Dollar, although the PMI has consistently surprised on the upside of late and consensus is for only a small fall to have been seen in July. Consensus looks for a fall in the PMI from 57.1 to 55.0.

"Notwithstanding the fact that this is very much a consensus trade, our short-term preference is still to buy dips (we don't think a 'panic' on the part of these new EURUSD longs would ensue unless the pair makes a clean break of 1.16 on the downside)," says Stephen Gallo, European head of FX strategy at BMO Capital Markets. "A break through last week's high (1.1909) is a fairly high bar for USD weakness to cross. But it's certainly not insurmountable."

Wednesday's data will hit the wires with the Euro at lofty levels and analysts on the look out for signs of profit-taking following a 9% rally from late May to the end of July. Many expect August, which is typically used as a holiday month and can often see markets blighted by thin volumes and volatility as a result, will see profit-taking push the Euro lower while technical analysts say the single currency is overbought on the charts and due a correction.

"EUR/USD last week’s failure to overcome the 12 year resistance line and the September 2018 high on a closing basis has provoked some profit taking and the market has started to correct lower. The intraday Elliott wave count is implying that this is likely to be shallow and may already be over. However for now we will continue to allow for a deeper correction," says Karen Jones, head of technical analysis for currencies, commodities and bonds at Commerzbank. "Dollar meltdown is attempting to reverse just ahead of the 2011-2020 support line on the US Dollar Index. The 13 count on the daily chart is a warning."