The Euro-to-Dollar exchange rate could consolidate this week and may even see a correction after an extended rally left it deep in overbought territory on the charts as the transatlantic coronavirus tables show signs of turning.

Europe's single currency was the second best performer among majors last week after a continued exodus from the U.S. Dollar lifted it from 1.1650 to above 1.19 at its peak, in spite of data confirming a historic contraction of the economy that was marginally worse than that seen in the U.S.

The Euro advanced 1.01% by the time all was said and done, leaving it behind only Pound Sterling for the week, although gains for both currencies were more the result of investors seeking refuge from an unravelling Dollar than they were reasons for homegrown strength.

Dollars have been sold heavily since a resurgent coronavirus curtailed reopening efforts in states accounting for large portions of GDP which, when combined with of Federal Reserve monetary policy and a looming November presidential election, has driven an exodus from the greenback.

But Dollar sellers have overlooked an evolving coronavirus situation in Europe that threatens the now-consensus idea that continental leaders contained the virus more effectively than the U.S. and so should see their economies recover quicker. That assumption is a part of what underpins the Euro's recent rally.

"When it comes to EUR and the broad USD it is all about growth expectations," says Jordan Rochester, a strategist at Nomura, who advocated buying the Euro when it was trading around 1.1050 in late May. "The steady downtrend in COVID-19 cases in Europe may have reached its limit with the state of re-openings. In the big four, Spain stands out with a pick-up in cases that has led to the UK reintroducing its travel quarantine for travellers that return from that country. This comes as the US shows signs of COVID-19 cases slowing in states such as Arizona. As a result, the market’s second wave concerns may flip back to Europe, which could materially hurt the EUR uptrend." 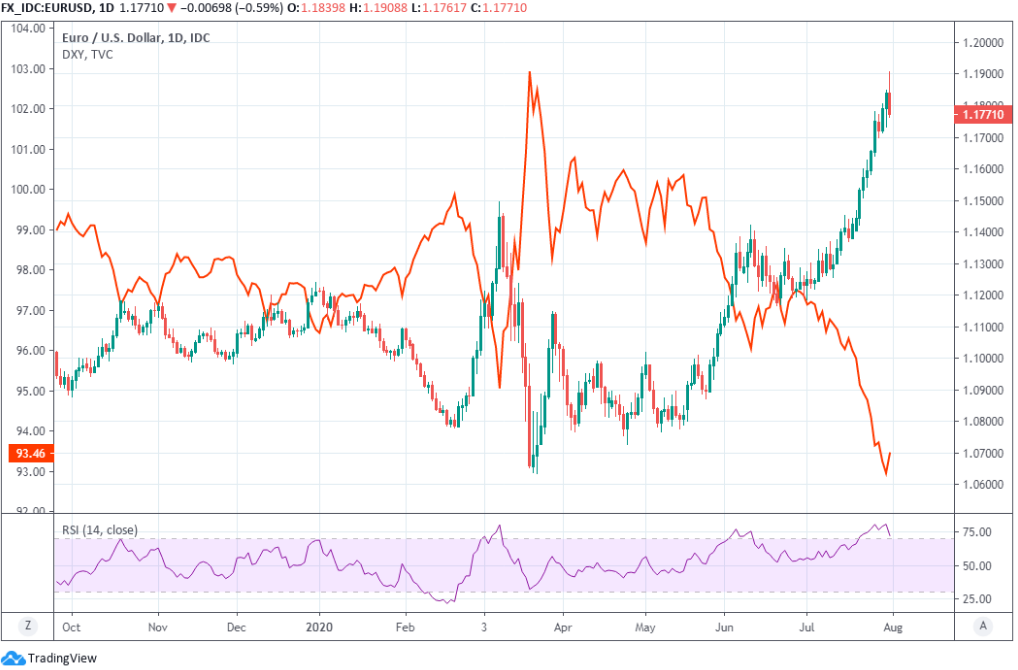 Rochester and the Nomura team have been looking for the Euro-to-Dollar rate to rise to between 1.18 and 1.20 after having bought it around 1.1050, but the bank has warned that the single currency could be wobbled by profit-taking in the short-term due to a turning of the coronavirus tables.

Spain, Belgium, Luxembourg, the Netherlands among others have seen clear increases in new coronavirus infections, while despite little change in the national trend German lawmakers fretted at the weekend over the impact that a protest in the capital could have on infection numbers amid concern about the prospect of a second wave there. Germans protested the disruption of their economy at the hands of virus-related restrictions while the UK government drew criticism in the domestic press after its containment and communications strategies reached new levels of farce late last week.

"Even if we have been clear EUR/USD bulls since spring, we find several reasons to worry for the USD bear crowd," says Andreas Steno Larsen, chief FX strategist at Nordea Markets. "We just want to remind you that we rarely see a bigger EUR long vs. USD than currently, which could mean that EUR momentum is running on fumes by now."

This is a risk to European currencies that have outperformed amid the Dollar exodus given much of this resulted from fears about the economic impact of fresh restrictions rather than the numbers of infections recorded. 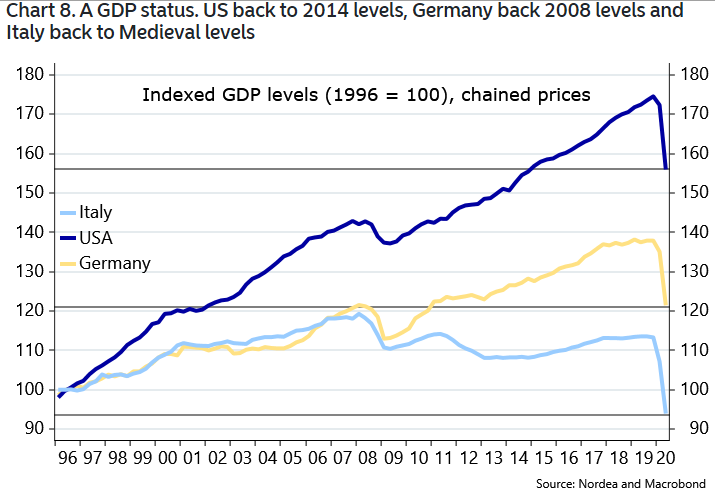 "EUR/USD is through tough resistance at 1.1815/33, this was a 61.8% Fibonacci retracement, a 12 year resistance line and the September 2018 high. We are surprised that this has not held the initial test. The break above here targets 1.2635/66, the 200 month ma Initial support lies 1.1663 (cloud support) ahead of the March high at 1.1495," says Karen Jones, head of technical analysis for currencies, commodities and bonds at Commerzbank. "Ideally dips lower will be contained by the 2 month uptrend at 1.1430."

Many analysts were suprised when the Euro made it above technical resistance at 1.1815 last week although the five day performance of the single currency has taken its relative-strength-index (RSI) measure of momentum further into overbought levels that typically indicate a fading rally. This might mean that the best the Euro  can hope for in the coming days is a period of consolidation that leaves nearby support levels intact and the uptrend alive and well.

Europe's single currency has been left trading at what are its highest levels since early 2018 but European Central Bank estimates suggest the trade-weighted Euro has actually risen above the levels which last prevailed before January 2015, which saw the launch of its maiden quantitative easing programme and initial foray into the realm of negative interest rates. This could mean that ECB pushback against the Euro is becoming more likely.

"The EUR rally is looking somewhat stretched but this is not bearish in and of itself; overbought markets can persist for extended periods of time. We think the EUR can move a little higher still in the near term and may remain elevated in the medium term. We expect firm support on minor dips to the high 1.16s/low 1.17s in the near term. Key support is 1.1485/00. We remain bullish," says Juan Manuel Herrera, a strategist at Scotiabank. 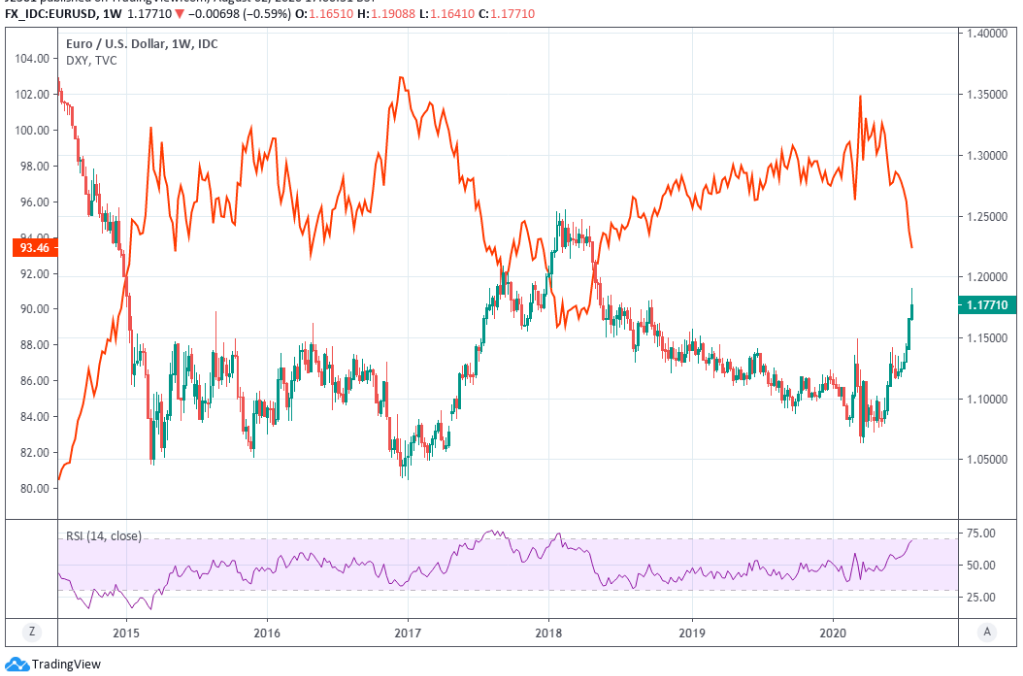 The Euro is trading at lofty heights as the Transatlantic coronavirus tables challenge perceptions of a rosier continental recovery and as a Dollar rebound may be brewing. U.S. lawmakers have run out time to extend emergency welfare benefits to households whose incomes have been disrupted but many analysts expect a deal to be reached in the coming days, which will also see a volley of U.S. PMI surveys and the July jobs report released.

The Dollar might be sensitive to good economic numbers given the extent to which it's been punished in July as a result of the second wave of infections that stymied the reopening of the economy last month, while bad numbers can often induce a safe-haven bid for the greenback.

Meanwhile, and in Europe, attention will be first and foremost fixated on coronavirus announcements coming from European capitals although the final estimates of IHS Markit PMI numbers for July will be reduced over the course of Monday and Wednesday and could draw some attention from the market.

"The resurgence in infections in Europe, the worse-than-expected collapse of Q2 GDP in parts of Europe (eg, Spain), and the potential ‘catchup’ of US fiscal policy, could even out the Europe versus US balance. From the US side, next week’s ISM PMIs, the nonfarm payroll data and progress on the negotiations on the Phase 4 package will be crucial. Given recent worsening in weekly claims data, next week’s employment data could well disappoint ," says Christian Keller, head of economics research at Barclays. "A Phase 4 spending bill remains crucial, in our view, to keeping the economy on a path to recovery, and we expect a ~$1.5trn fiscal package to be enacted by August 7. Without it, the outlook for demand would look more tenuous."