- EUR/USD in correction mode as market eyes second wave risks.
- After recovery fund rally fizzles out, as negotiations set to draw on.
- Risk appetite in driving seat with support at 1.1172, 1.1138, 1.1027.
- EUR, USD PMI surveys to update on pace of economic rebound.

The Euro retreated further from three-month highs last week as it underperformed and the greenback steadied amid a risk-averse shift in financial markets that could weigh further on the single currency in the coming days.

Europe's single currency was helped lower by discontent with the outcome of Friday's European Council meeting, which came alongside price action suggesting a bout of risk-aversion in broader markets, with the combination leaving the Euro as the week's third worst performer.

Risk aversion had roots in concerns about a growing second wave of coronavirus in the U.S. and China, but has lifted the greenback to the detriment of riskier currencies while furthering an earlier correction in the Euro.

The U.S. reported its highest one-day total for new infections since the beginning of May for a second consecutive day Friday while the World Health Organization declared 150k new infections, the highest one day total so far that's been fueled by strong increases in large but developing countries.

Infections have climbed as outbreaks in a handful of reopened U.S. states gathered momentum while markets were also troubled by China's new outbreak in Beijing that's seen some parts of the capital put back into 'lockdown'.

"When China sneezes, Germany catches a cold, so we need to watch the situation very closely in the coming week or two – both in Beijing and on the Sino-Indian border where the stand-offs have escalated in recent weeks," says Andreas Steno Larsen, chief FX strategist at Nordea Markets. 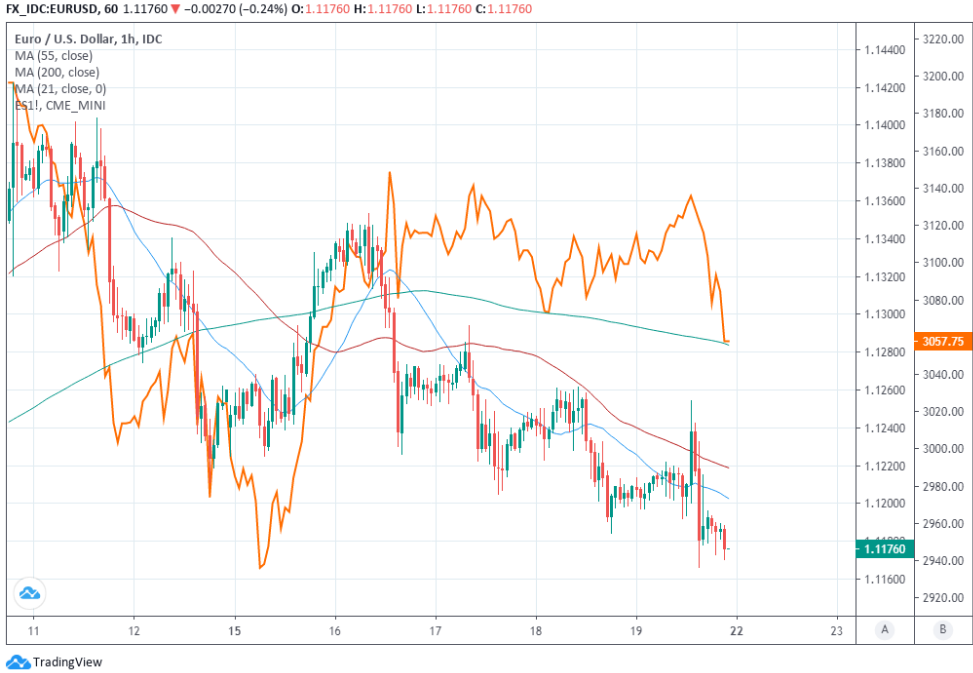 Fears of a second wave are competing with economic data, as well as the normally supportive policies of central banks and governments, for attention in a market where investors are close to having scrubbed the pneumonia-inducing disease off the charts. At least in the stock markets that is. Recent gains for stocks leave them as well as currencies like the Euro vulnerable to any sustained turn in sentiment.

However, with White House officials including President Donald Trump having said they "can't shut down the economy again," it's possible that the ultimate impact of any second wave will depend on the effect it has on the individual decisions of companies, consumers and households. In the meantime, economic data will also matter again for exchange rates as April and May month figures emerge through the rest of June and July, with investors likely to favour currencies of countries rebounding the fastest.

"If the virus is spreading fast, people opt to stay at home. This is bad news for policymakers in Florida, Arizona, South Carolina, California and other states with continued increases in the virus spread. The cheapest option is likely “the hammer and the dance with a short but effective lockdown and subsequent massive testing," Larsen says. "We will get a test of the V-bound narrative when the Euro area PMIs are out on Tuesday with a decent scope of another positive surprise in our view. Maybe we should already prepare ourselves for a whole bunch of idiotic “PMIs back in expansion territory” stories."

Flash PMI surveys for the month of June are out on both sides of the Atlantic Tuesday, which should provide investors with a glimpse of the relative pace of economic recovery that took place last month. Larsen and the Nordea team say the confidence and activity barometers will say very little that's useful about economic conditions on the ground given the method of calculation means a rebound of some form is almost certain.

This won't necessarily stop investors making inferences about the likely relative pace of recovery on either side of the Atlantic. Eurozone figures are out between 08:15 and 10:00 Tuesday while the U.S. numbers are expected at 14:45. These figures will come after U.S. retail sales were shown rising faster in May than they'd fallen in April, echoing the message of the May non-farm payrolls report that suggested the economy and labour market were quick to stir once 'lockdown' was lifted. Eurozone retail sales are due out in early July. 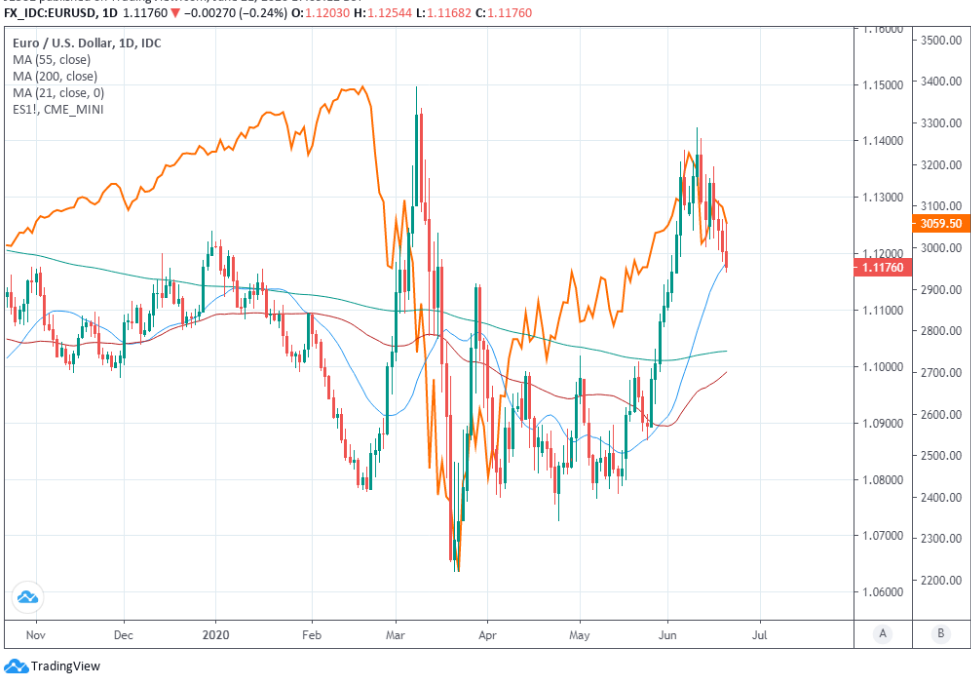 "EUR/USD is downside corrective and very near term remains on the defensive. Initial support lies at 1.1172, the 38.2% retracement ahead of the one month uptrend at 1.1138, which is expected to hold the downside. We expect the correction to complete very shortly," says Karen Jones, head of technical analysis for currencies, commodities and bonds at Commerzbank. "1.1422 together with the March high at 1.1495 represent the near term targets/quite formidable resistance and we would allow them to hold the initial test."

Friday's bearish finish came as European leader lacked a unified and coherent line after emerging from Friday's European Council meeting, leaving an air of disunity in their wake and feeding the market's suspicion that the road to any agreement will be a long and arduous one. Few expected anything meaningful to be agreed about the coronavirus recovery fund although the lack of a surprise deprives the Euro of what would otherwise be a material source of support.

Investors will watch and listen for signs of compromise ahead of a currently-unscheduled July meeting of EU leaders, with a particular focus on statements emerging from countries such as Austria, Sweden, Netherlands, Belgium and Ireland, which oppose various aspects of the proposal to enable the EU to borrow money from markets that it could then dole out in a mixture of grants and loans from January 2021 in order to aid the coronavirus recovery effort.

But in the interim the Euro is seen trading according to the ebb and flow of risk appetite that had softened ahead of the weekend.

"Discussions on the Recovery Fund have settled on a slower track, as expected, and the final package is likely to be whittled down as the negotiations continue through the summer. Next week’s PMIs should confirm that activity is improving, but recent developments on virus containment abroad serve as a reminder that uncertainty is still high. We believe the Euro will appreciate in the months ahead, but that will require stronger activity and lower tail risks to allow for gradual portfolio reallocation," says Zach Pandl, global co-head of foreign exchange strategy at Goldman Sachs. "Recent developments are a good reminder that “bad news” from the US can paradoxically lift the Dollar if it affects investor risk appetite or raises questions about the global economic outlook." 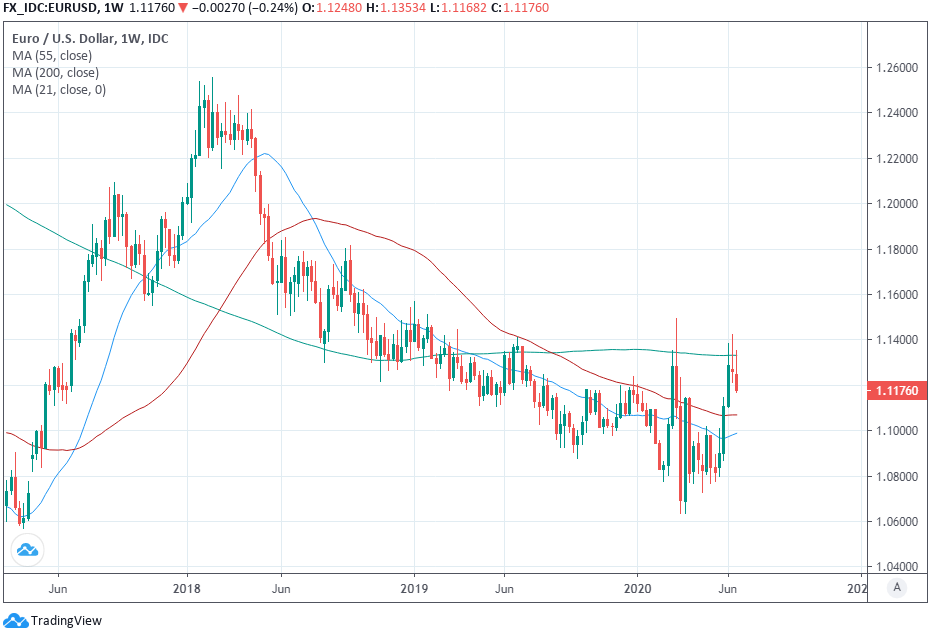 Above: Euro-to-Dollar rate shown at weekly intervals with 21, 55 (red) and 200-week (green) moving-averages.