The Euro crumbled and bond markets rallied Friday amid disappointment over the lack of consensus that emerged from a video meeting of European Union leaders who kicked the coronavirus can into July.

Europe's single currency was crumbling after leaders agreed that a specialised fund will be necessary to pull some economies out of the coronavirus trough but that negotiations will have to take place in order to produce one.

The statement came after the June EU Council meeting in which European Commission ideas for a "Next Generation EU" were expected to be debated, with investors focused on the proposed €750bn of grants and loans to support recoveries out of the hole dug by 'lockdown' measures used to contain the virus.

"Sound bites of EU leaders after their videoconference are all over the place," says Florian Hense, an economist at Berenberg. "The best news is probably that EU leaders did not take a step back."

Leaders agreed to hold a special in-person summit in July but beyond that, conclusions of the eagerly-awaited meeting offered little more than platitudes, statements of the obvious and expressions of ambition.

Expectations were already low heading into Friday's European Council meeting but investors and analysts were looking for an indication of at least some form of progress toward agreeing a European political response to the coronavirus. 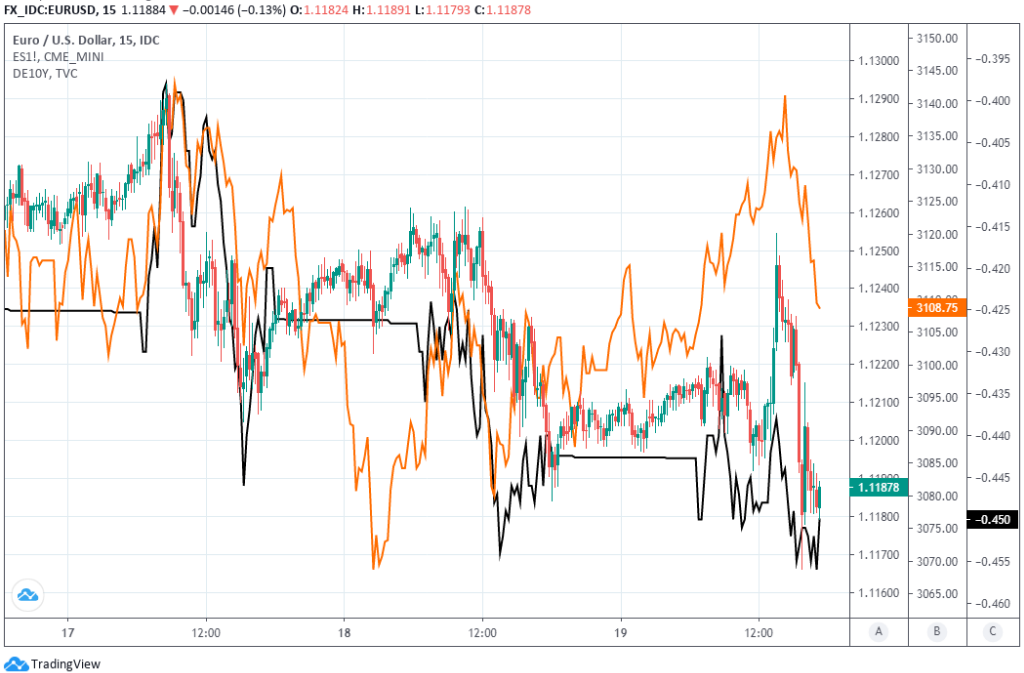 The Euro's slump came before Friday's collapse in the stock markets that many currencies have been following of late, although those and risk assets did soften in response to more evidence of a so-called second wave of coronavirus infections. The World Health Organization said there'd been 150k new infections reported on Friday, the highest daily count so far.

"The negative soundbites which followed out of Denmark, Sweden and the Netherlands (three of the “Frugal Four” countries) are now overwhelming some of the positive headlines we first saw," says Eric Bregar, head of FX strategy at Exchange Bank of Canada. "The bearish head & shoulders pattern we outlined on Tuesday now continues to play out on the daily EURUSD chart."

Many analysts were hoping to hear that the proposals could potentially win the unanimous endorsement of EU leaders with just a few tweaks to the balance between grants and loans intended to be offered as part of the next seven-year budget that runs from January 2021. But no such statements were forthcoming.

EU Council President Charles Michel said he will prepare proposals for leaders to negotiate in a currently-unscheduled July meeting while German Chancellor Angel Merkel was reported to have said they'd "not talked much" about such details. Leaders of Sweden and the Netherlands were reported to have been downbeat on the prospects of a deal being reached in July.

"An agreement at this stage would have been a huge surprise. As expected, the meeting apparently served mostly to exchange and explain the starting positions for the negotiations than to bridge the key differences," Berenberg's Hense says. "Given the long list of differences, the road to the EU’s common recovery plan is still long. Discussions could stretch well into the second half of 2020."

The 'frugal four' countries that are Denmark, the Netherlands, Sweden and Austria have opposed the idea offering grants to worse off members, although investors and analysts have assumed that with tweaks to the split between loans and grants, a compromise could be reached. But that's not the only fracture that could prevent the proposals from ever being implemented.

The fund must be agreed alongside the next seven-year EU budget, always a controversial affair, while the "Next Generation EU" would bestow new powers on Brussels that are bound to be controversial for some other members.

In other words, there is a long list of potential impediments to a collective European response to the coronavirus crisis that was already not expected to materialise before January 2021, and on Friday leaders didn't even attempt to pick any fruit from the European Council tree not even the low hanging ones. 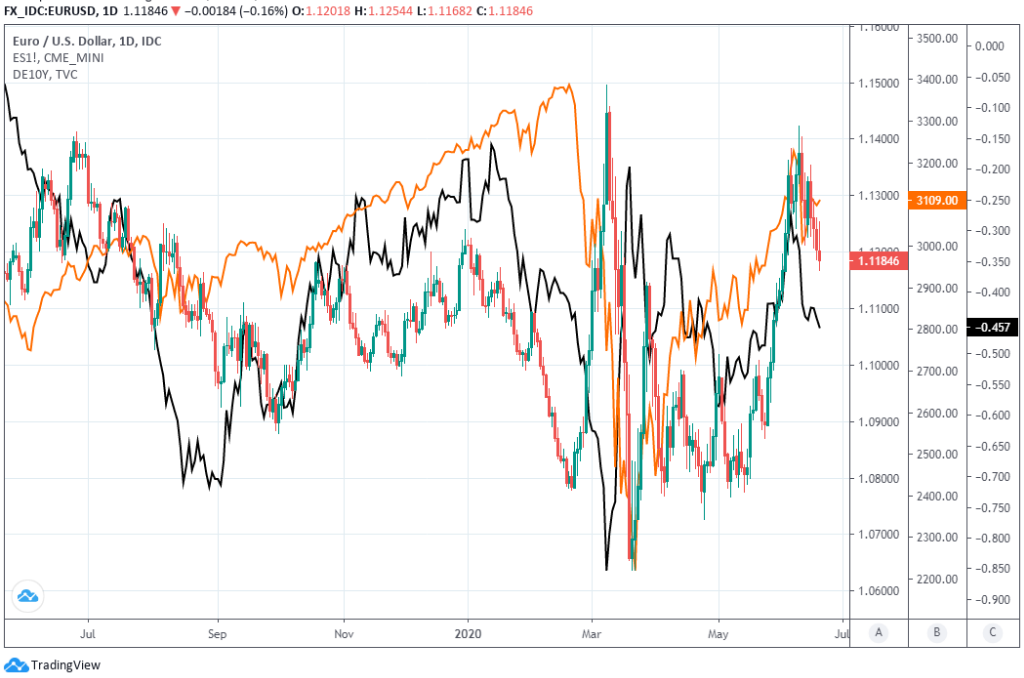 "We have argued before that policymakers’ actions to safeguard the currency union have been a key driver of the recent strong performance of the euro," says Franziska Palmas at Capital Economics, who forecasts the Euro will hit 1.20 by year-end. "Accordingly, if the recovery fund is eventually approved and a significant share of the funds is disbursed as grants – which we think is the most likely outcome – we suspect that the euro will gain more ground."

Europe's single currency had been advancing against the Dollar, Pound and others while playing second fiddle to the higher yielding antipodean units as stock markets rose in the final session of the week. Currencies have slavishly followed almost every waking move of stock markets of late much to the ire of analysts who cover them, although both the Euro and global stock markets turned lower ahead of the weekend.

Price action in in the bond market told a different story with European yields falling more heavily than non-European counterparts, potentially indicating investor discontent, after the meeting's outcome was announced but before the Euro turned lower. Government yields were down across the board in Europe Friday and continued to fall with the Euro once the single currency turned lower.

"We view the euro as having corrected higher into a new trading range of 1.1000-1.1500 in large part on a better policy response that has improved the outlook in Europe. The ECB has now done its bit," writes Derek Halpenny, head of research, global markets EMEA and international securities at MUFG, in a morning research note. "Now it is time for EU politicians to indicate at the very least some progress... A failure to do so after today’s gathering could see EUR/USD correct lower."

The coronavirus has imposed heavy human and financial costs on all countries but not all countries were equal in their economic fortunes before the pneumonia inducing disease flew escaped from China.

Many of the weaker developed world countries are in Europe and notably, the southern part of it where the coronavirus bit first and economies are vulnerable to protracted recessions due to over-indebted governments that will struggle to support companies and households on their own.

Southern Europe has stagnated for a decade and partly as a result of austere reforms enacted to save the Euro from its own birth defects but with the European Central Bank (ECB) aside, the bloc's institutions and the much-vaunted European unity have been absent from the coronavirus battlefield.

That's been politically controversial already but could become a financial problem if the ECB's bid for Italian government bonds disappears, which would lead to destabilising expressions of concern about the impact the virus' extortionate cost could have on debt sustainability in 'periphery' economies.