The Euro-to-Dollar rate took a breather from a fortnight-long rally on Friday and could now be due a period of consolidation as investors mull the outlook for the single currency and U.S. greenback, although some analysts say the exchange rate is still on course for 1.15.

Europe's single currency was quoted above 1.13 Friday but lagged smaller rivals in a global advance on the U.S. greenback, while the combination of a muted EUR/USD and Dollar gains over the Yen and Franc enabled the Dollar Index to stabilise following eight days of back-to-back losses.

"EUR/USD has eroded the 1.1240 December peak; and has reached its initial target at 1.1333, the 200 week ma. It is possible that we may see some consolidation around here ahead of gains to the 1.1495 March peak," says Karen Jones, head of technical analysis at Commerzbank.

At 1.1332 the Euro was testing its 200-week moving-average Friday after rising 2.27% over five days and nearly 4% in the last fortnight in a rally that was born when France and Germany proposed a €500bn coronavirus recovery fund that would've provided grants to member states who're struggling financially.

The EU has since outdone its largest paymasters with its own proposal while the European Central Bank (ECB) has followed others by making provisions to indirectly mop up the new bond issuance that results from it, leaving markets with the impression of a Europe getting its act together after inaction left some of the continent's most vulnerable to fend for themselves as they battled a coronavirus that briefly made a pandemic epicentre of the 'periphery.' 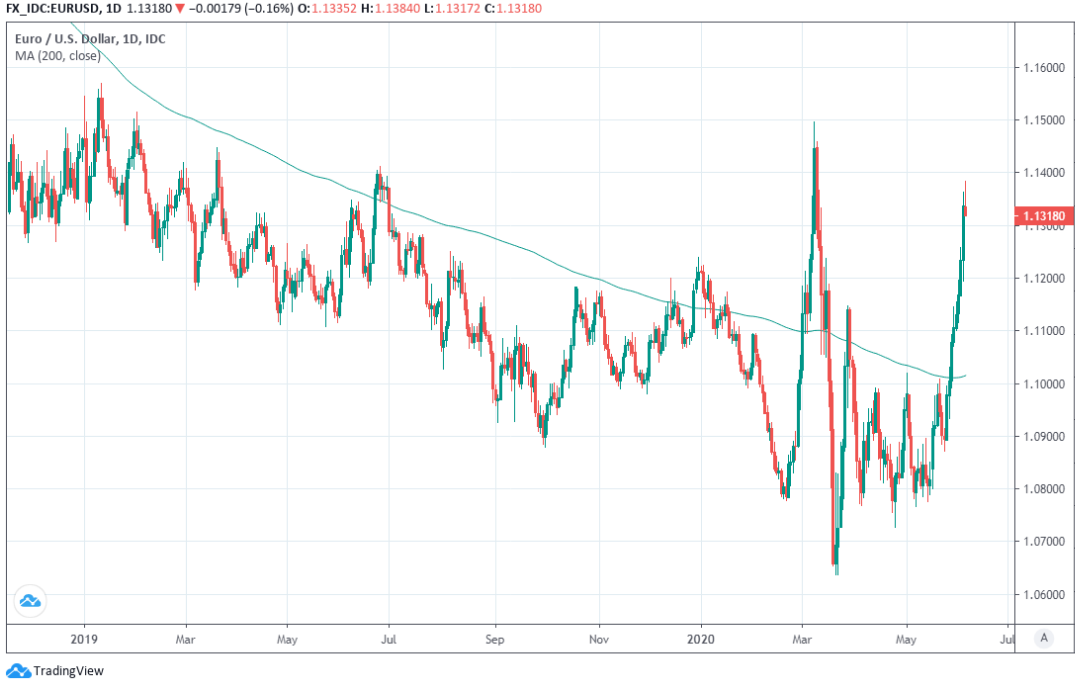 Above: Euro-to-Dollar rate shown at daily intervals alongside 200-day moving-average.

"EUR/USD has come a long way in a short space of time, but it looks as though the reflation trade and the emerging dollar bear trend can sustain the rally. We are also closely watching the options market for signs of active buying of upside structures, which would add another layer of confidence to our view for 1.15/16 and possibly higher if those that have hoarded dollars are forced to unload," says Chris Turner, head of markets and regional head of research at ING.

Thursday's ECB decision to carry out a further €600bn purchase of European bonds has cultivated the image of a joined up fiscal and monetary policy that's actually working to limit the downside realised by the chronic underperformer that is the post-debt-crisis Eurozone economy, enabling the Euro to belatedly participate in an ongoing rally against the greenback that has scope to become a game-changer for the once rip-roaring Dollar Index.

This has bolstered a rally that had already been boosted when a range of voices and participants threw in the towel on once bearish forecasts or wagers against the single currency. However, the optimistic side of the market sees scope for additional gains in the coming weeks for both technical and fundamental reasons, with many looking for a test of the 1.15 handle while the not-optimistic side favours 1.05 by the end of June or September.

"Global equities (MSCI world index) are up by an impressive 39% since the bottom of March 23. They are up by 7.3% just the last two weeks. They are still down by 5.8% for the year, but this seems very little to us given the severe recession," says Athanasios Vamvakidis, head of FX strategy at BofA Global Research. "The evidence suggests to us that FX and equities are effectively the same trade. If equities keep going up, the USD will keep going down."

Appetite for the Dollar and investment in stock markets that have bounced off coronavirus lows in almost as dramatic fashion as they fell to them will also play a role in determining the outlook for the Euro because many currencies now follow those markets almost in lockstep and Europe's has been participating in the 'reflation trade' for the last two weeks.

Above: Euro-to-Dollar rate shown at daily intervals alongside 200-day moving-average.

"Whilst upside in EUR is looking to be a new consensus in FX – it’s really worth noting that European equity outperformance and it’s inflows can see it continue further," says Jordan Rochester, a strategist at Nomura. "Last week we became more optimistic on EUR and bearish on USD as a few material factors turned. We flipped into both long EUR/USD and EUR/GBP. We still have a high conviction in both trades. We can test March highs once again as long as EUR avoids the potential pitfalls."

Rochester and Nomura team say outperformance in Eurozone stock markets can see the Euro get the better of the Dollar but that any vote in the U.S. Congress for another large stimulus would undermine the rally. Such an outcome would boost American economic recovery prospects relative to those in Europe. They also cite a possible second wave of coronavirus infections and German constitutional court opposition to ECB bond buying as risks.

The Euro was testing its 200-week moving-average at 1.1332 on Friday and has not close above that level since the first week of June 2019, so exactly one year, and with March volatility aside that was the only occasion the Euro has traded above that level since February 2019. The Euro spent only a fortnight in the first half of June 2019 trading above the 200-week moving-average.

Europe's single currency has benefitted from an improvement in sentiment in the last two weeks which has enabled it to catch up with other currencies as they track stock markets higher but sentiment is fickle and can turn at the drop of a hat. If there are any new hats to actually drop they might do so in the third week of June before or after the European Council summit on the 18th and 19th.

June's summit will see national leaders debate counter-proposals to the ideas of the European Commission, France and Germany. Markets are aware of opposition from financially healthier countries who're opposed to bailing out others that have been painted and perceived as profligate in spending over many years, although the same markets also assume a compromise will be reached on this and the EU's next, always controversial budget.