Europe's single currency was almost a full percent higher late in the European session after outperforming even the higher-beta and typically more volatile Australian and New Zealand Dollars in a global ripost against the U.S. greenback. The Euro was outperformed by only the oil-linked Norwegian Krone and the Swedish Krona Thursday but drew most of its strength from the European Central Bank (ECB) decision and fiscal policy-related developments.

The ECB said Thursday it will increase by €600bn (£540bn) its pandemic emergency purchase programme, which is the banner under which the bank buys European government bonds for reasons related to the coronavirus, taking the total purchase allocation to €1.35 trillion and close to the level of new issuance that's expected to result from national and supranational efforts to cover the cost of 'lockdown' measures used to contain the coronavirus.

"This reflects the deep recession in the economy and the significant disinflation it will trigger over coming years. The euro rose on the decision versus the US dollar, the Japanese yen, the Swiss franc and pound sterling. This reflects that investor sentiment towards the eurozone has improved further," says Georgette Boele, a senior FX strategist at ABN Amro. "If EUR/USD were to continue its rally, the next resistance level would be the previous high just below 1.15."

Crucially for investors and the Euro, Thursday's ECB decision means there's 'a buyer of last resort' out there to indirectly hoover up any 'periphery' bond debt that ordinary creditors deem to be a deal too far for their national finances. This prompted sharp gains for Italian bonds and the Euro, which was already on its front foot following the German government's announcement on Wednesday night that it will increase its own support for the German economy. 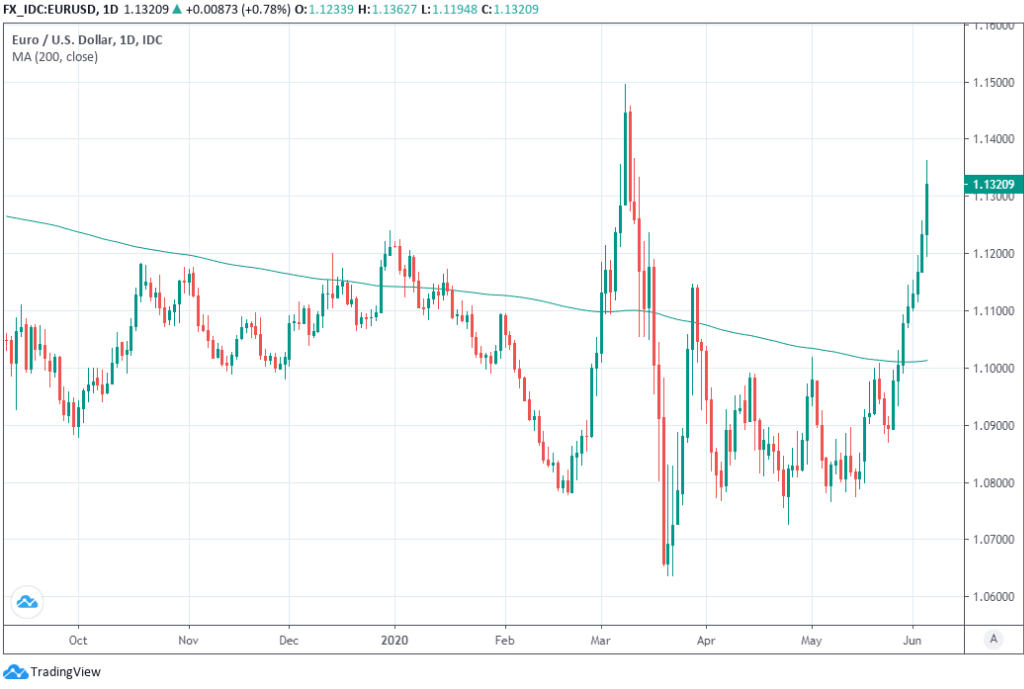 Above: Euro-to-Dollar rate shown at daily intervals with 200-day moving-average.

Boele says the next meaningful resistance is at 1.15, which could quickly come into view if the nascent rally continues and the Dollar remains on its back foot, although she doubts this'll happen. ABN forecasts the Euro will hit 1.05 by the end of June before recovering to only 1.12 by year-end, with both levels lower than those prevailing Thursday. Boele and the ABN team are not alone though.

"The consistency of the recovery in EUR/USD and the Eurozone news-flow in the past couple of weeks beg the question as to whether EUR/USD is finally undergoing a sea-change in direction," says Jane Foley, a senior FX strategist at Rabobank, who forecasts a Dollar recovery over the coming months. "While the sell-off in the USD is broad based, it has coincided with the perception that the EU may finally have taken steps to reduce risks of fragmentation. If European officials can follow through and build a more integrated EU, this would likely be seen as a game changer for political risk in the Eurozone. In turn this could bolster the long-term value of the EUR."

Germany's announced Wednesday that it will spend €130bn or just less than 4% of GDP on VAT tax cuts, additional support for families with children and a range of other measures in what some might have perceived as a decisive break with the traditional fiscal discipline that would otherwise have seen the government cutting expenditure as the country's coronavirus-related economic woes build.

European institutions have long sought to have thrifty nations like Germany loosen purse strings to bolster demand in other parts of the bloc and for the time being at least, the coronavirus has gotten them to do that. Some estimates suggest the German government will now spend close to 30% of GDP to cushion the economy from coronavirus-related damage. 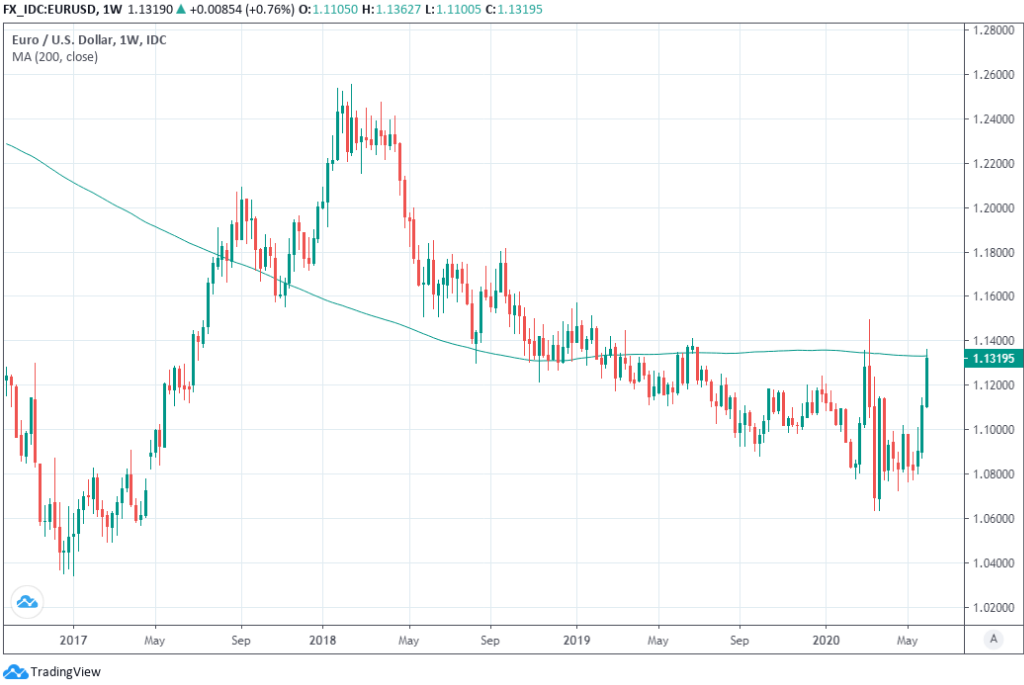 Above: Euro-to-Dollar rate shown at weekly intervals with 200-week moving-average.

"Not all of that is stimulus proper, and not all of it is immediate. But the message is clear: After liquidity support during the lockdown, demand stimulus is coming in size. Counter-cyclical fiscal policy is in full swing," says Evelyn Herrmann, an economist at BofA Global Research. "The fiscal response to the crisis is getting closer to text-book. It is powerful and decisive. But a large export sector still means only partial healing if the rest of the world doesn't recover. That matters for composition of growth. And fiscal rules remain in place. They are paused, not abolished."

Germany's announcement came hard on the heels of a European Commission proposal for more than €750bn to be borrowed in its name in order to fund grants and loans to member states as they recover from the virus, which itself followed a similar but smaller proposition from Germany and France. This collection of proposals and actions is in contrast to earlier controversial inaction that was seen threatening the long-term sustainability of the bloc.

The various proposals have cultivated an impression in the market of fiscal and monetary policies working unison rather than pulling in opposite directions as they have done in the past, while also reducing so-called break-up risks. This has enabled the Euro to rise against the Dollar rather than be left behind by other currencies, but Rabobank, ABN and a range of other participants doubt that gains are sustainable. Rabobank forecasts the Euro will fall back to 1.09 in one month before falling to 1.05 in three months.

"We are sceptical about the ability of Eurozone officials to find a budget compromise quickly and in an orderly manner. We also see risk that eventually investors will accept that US/Chinese tensions, on-shoring and heightened unemployment around the globe will impact supply chains, consumer demand and company valuations. While the bull market may have further to run in the near-term and the up-move in EUR/USD further to go, we remain sceptical at present that we have witnessed an enduring turn," Foley says.