- EUR/USD trades soft but above 1.10 handle amid recovery fund hopes.
- Intra-EU pushback against grants constrains EUR absent a compromise.
- ECB to increase QE next week ahead of June recovery fund horse-trading .
- 1.1240 a possibility if EUR overcomes 200-day average but risks will linger.

Europe's single currency was quoted -0.12% lower in a slightly risk-averse currency market Thursday but had held onto the 1.10 handle against the Dollar as Euro bulls expressed greater confidence that further upside will be seen in the short-term while sceptics stepped aside pending further information on the fate of Wednesday's proposals from the European Commission on the financing of a coronavirus recovery fund.

"The EC’s proposal for EUR750bn in financial burden sharing should provide some support to the Euro into June, allowing EUR/$ to play catch-up with some of the other $ crosses," says Chris Turner, global head of markets and regional head of research at ING. " Given a difficult external environment, this FX story may better initially be played out on the crosses, e.g. EUR/AUD to 1.70 – given China-Australia tension. However, momentum funds may play a role in a EUR/USD range break out – looking for 1.12."

Recovery fund proposals from commission chief Ursula Von der Leyen lifted the Euro above 1.10 Wednesday and briefly took it accross the 200-day moving-average that was located 1.1010 on Thursday. Whether or not that is overcome on a daily closing basis and in a sustained way is key to the short-term outlook.

Von der Leyen proposed a landmark €750bn (£677bn) increase to the executive body's budget to fund a mix of grants and loans to help European Union members pull their economies out of the coronavirus crater, with two thirds in the form of grants. It will be funded by commission borrowing from the markets, which is rare and has got some parts of the market excited about the prospect of a siezmic shift in the fundamental backdrop for Europe. 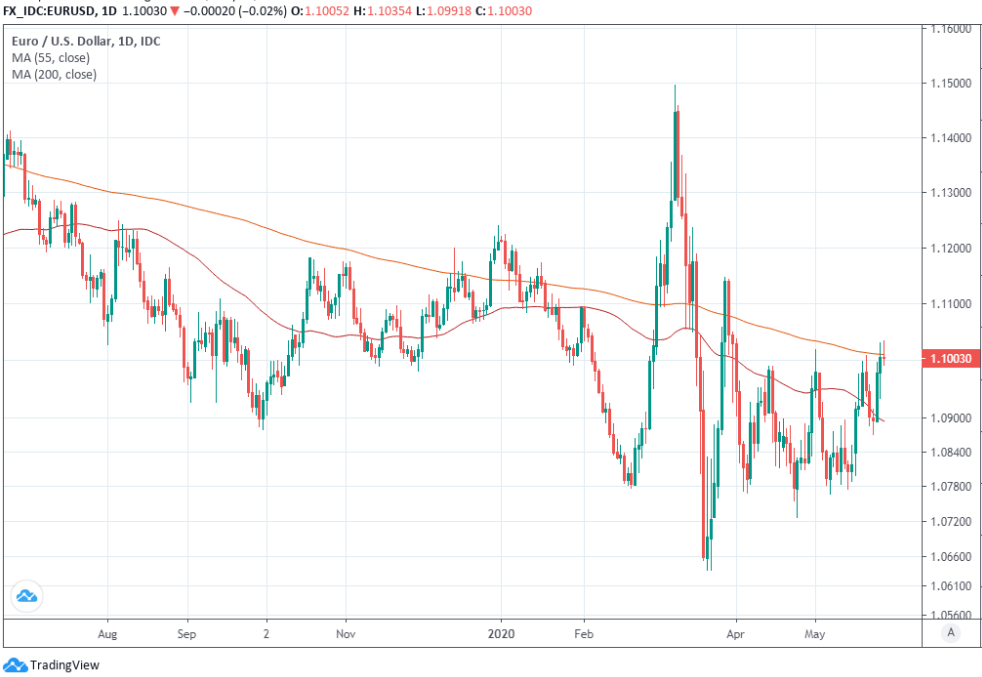 "EUR/USD has started to erode the 200 day ma and its current May high at 1.1012/19. A close above here (favoured) is needed to regenerate upside interest to the 1.1240 December peak and beyond to the 200 week ma at 1.1332. Note that we have a confirmed buy signal on the DMI Index and now look for a move higher," says Karen Jones, head of technical analysis for currencies, commodities and bonds at Commerzbank.

Any funds raised by the commission will be doled out to EU members according to a combination of their relative size in the bloc as well as their growth prospects, which might ensure the bulk of aid goes to the hardest hit countries. However, there are many details that still need to be thrashed out by the Eurogroup of finance ministers in a June 11 meeting and then unanimously endorsed by the European Council, which next meets on June 18 and 19.

The fund will not operate until January 2021 at the earliest and there is also a number of countries that have already come out against the proposals including the 'frugal four' as well as Estonia, whose finance minister described the plan on Wednesday as a "big step towards United States of Europe," and suggested the country cannot support it.

"Investors don't react to small print or finer details as much as they react to headlines (especially in the FX market), and today was full of headlines. This is why the response to the aforementioned headlines visible in the EUR and some bond markets should not be instantly faded aggressively. That being said, the extent of EUR short positions held by leveraged funds going into this was only modest, and the near-term risk of a default by one or more Eurozone member states was already very low. Therefore, we would question how much risk premium needs to be removed from certain financial variables," says Stephen Gallo, European head of FX strategy at BMO Capital Markets.

Above: Nomura graphs showing expansion of ECB balance sheet relative to Fed and BoE, with EUR and CNH correlation.

"The past eight weeks has been a washout in EUR. Rising optimism on the approach of 1.10, downright pessimism when we traded down to 1.08 - but not much of a trend in between. Well now EUR optimism looks to be on the rise and with it we may have reached escape velocity to break the range," says Jordan Rochester, a strategist at Nomura." We have yet to call time on our EUR/USD short as it continues to operate roughly in a 1.08-1.10ish range, but are close to stopping out if EUR breaks 1.1050."

Rochester says there are signs that Eurozone stock markets are on the verge outperforming the U.S. market, which might be positive for the Euro given how past North American outperformance has weighed on the single currency. However, he also says there are lots of reasons why the Euro could still underperform including next week's European Central Bank meeting and rising tensions between the U.S. and China.

The ECB is widely expected to increase the size of its coronavirus-related quantitative easing programme next week and potentially in a big way so as to soak up the additional supply of bonds that will hit the market as a result of governments supporting economies as they recover from virus-induced shutdowns. This could weigh on the Euro as currencies are not normally fond of the lower bond yields produced by QE and so too could U.S.-China tensions given the Euro's correlation with the Yuan.

Rochester is a seller of the Euro but says the his stop-loss would at risk on any move above 1.1050, although a breach of that threshold would bring the exchange rate into contact with its 55-week moving-average at 1.1064. It hasn't traded above that average since early 2018, when the U.S.-China trade war first broke out, except breifly amid the coronavirus-related collapse of emerging markets that lifted the Euro by 6% between March and April. 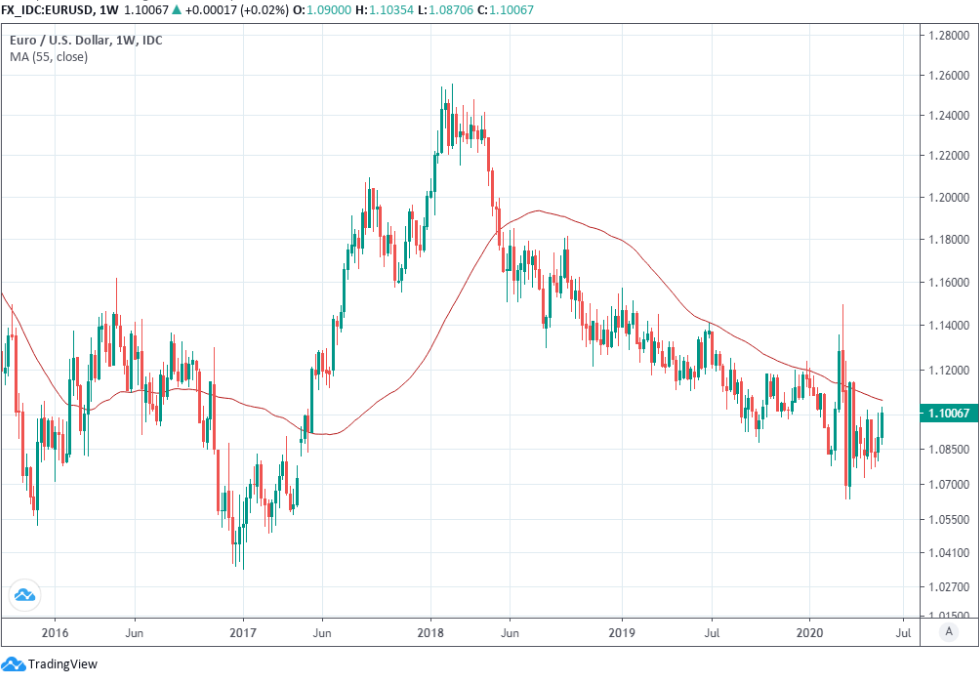 Above: Euro-to-Dollar rate shown at weekly intervals with 55-week moving-average in red.