Europe's single currency advanced more 0.69% against the Dollar last week but it failed to overcome key technical obstacles during the Wednesday session and was probing below the 1.09 handle in Friday trade following a two-day retreat into the holiday weekend. The Euro-to-Dollar rate could find support coming from the charts around 1.0890, technical analysts say, but the next level down is 1.0797 is the above gives out.

"EUR/USD has rallied towards and failed just ahead of the 200 day moving average and the current May high at 1.1014/19. Ideally dips will hold circa 1.0890 for another leg higher. A close above here (favoured) is needed to regenerate upside interest to the 1.1240," says Karen Jones, head of technical analysis for currencies, commodities and bonds at Commerzbank.

The Euro's gains were aided by an upbeat and trigger happy mood in broader financial markets but the strength of their earlier impulse came from a Franco-German proposal to allow the European Commission to borrow €500bn (£447bn) so it can provide grants to weaker, virus-hit Eurozone members who might otherwise struggle to cover the cost of unprecedented national economic shutdowns without adding so much to their debt-to-GDP ratios that they would risk a destabilising rebellion in the bond markets.

The Euro has a negative correlation with 'periphery' bond yields that fell in response to the announcement, although how those yields and the currency perform in the coming days will depend on investors' responses Monday to a competing proposal from the 'frugal' Northern members, who took issue last week with the idea of providing grants rather than loans to Southern members who've long been painted and perceived as 'profligate'.

"Dips should find that the short term uptrend at 1.0797 offers support and while above here will assume a neutral to positive bias," Jones says. 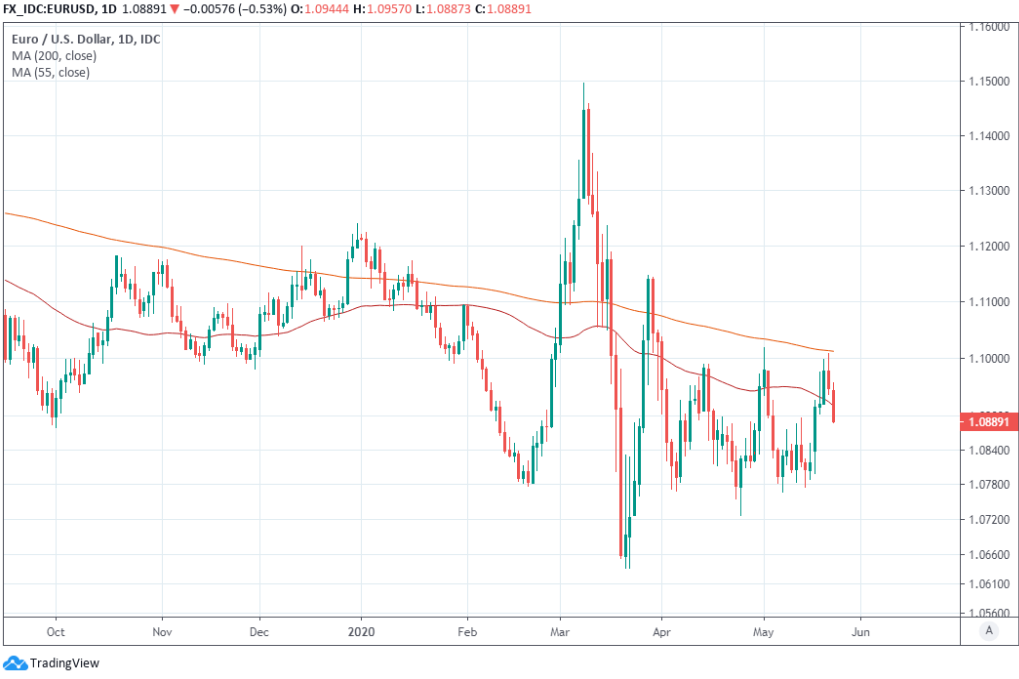 The so-called frugals released counter-proposals at the weekend which seek to have the commission make loans rather than grants, in addition to a two-year time limit to the programme's duration. This sets European leaders up for both a clash as well as a potential offer or promise of compromise during the week ahead, which could mean volatility in the Euro-to-Dollar rate.

"We are headed for what could prove to be one of the most seminal weeks in post-1989 European politics, yet it seems to us that most investors are surprisingly uninterested in the Franco-German debt proposal and the according potential fiscal fire-power in the Euro area. Maybe the reason is that no one thinks that the debt proposal stands a chance since Denmark, Sweden, Austria and The Netherlands are all firmly against it (remember that EU debt requires unanimity) or else the market is yet to fully grasp the wider consequences of an European Union with a sudden and long awaited potent fiscal arm? ," says Andreas Steno Larsen, a strategist at Nordea Markets.

The European Commission is also set to unveil its own proposal later in the week, which investors will scrutinise in the hope of finding the ingredients for a compromise between members in the North and South. Proposals follow weeks of uncertainty over whether European political leaders would even act at all.

"If the EU authorities can demonstrate a heightened degree of political coordination, it could be a game changer in terms of the outlook for the EUR. However, it is still too early to come to this conclusion. While the risk of a dip towards EUR/USD 1.05 on a 3 month view may have been reduced, previous crisis have highlighted that European politicians are often only pushed into compromise agreements when tensions between them become untenable. Consequently we view it as too early to alter this forecast," says Jane Foley, head of FX strategy at Rabobank.

The recovery fund is far from being in the bag and will only limit the extent to which the coronavirus crisis exacerbates unsustainable debt dynamics in Southern Europe,  assuming that it's not "watered down" first, which many believe it will be. Watering down might begin in the week ahead week and at a point when U.S.-China tensions are threating a metamorphosis into China-rest-of-world tensions that can only have negative implications for the global economic recovery and risk sensitive currencies. 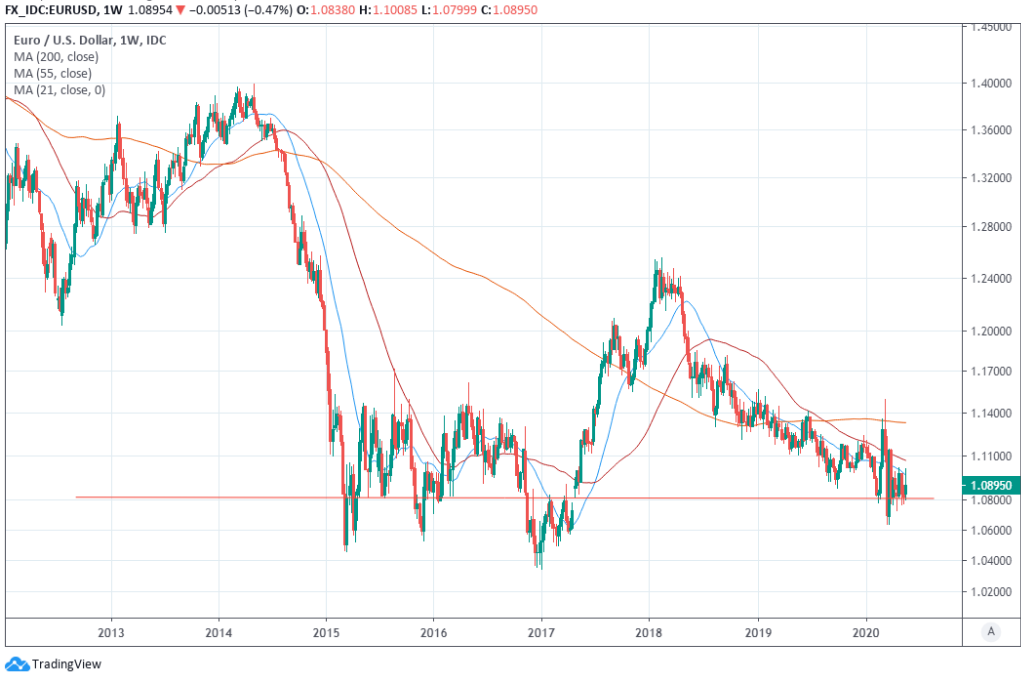 Above: Euro-to-Dollar rate shown at weekly intervals with 200, 55 and 21-week moving-averages. Trendline drawn at 1.08.

"It is important to clarify that the recovery fund is not a Eurobond and will not address debt sustainability concerns in the periphery," says Athanasios Vamvakidis, head of FX strategy at BofA Global Research, who advocated last Thursday that clients bet on a decline in the Euro-to-Dollar rate from 1.0977 to 1.05 in the coming weeks. "We expect that EUR will weaken in the months ahead because of a weaker global outlook compared with consensus forecasts; a more severe Eurozone recession compared with the US; Eurozone policy constraints; periphery sovereign risks; and a long EUR market position."

The Euro enters the new week with investors likely fearing another clash between the U.S. and China fresh protests in Hong-Kong at the weekend that resulted in clashes between demonstrators and authorities. Protests were reignited in Hong-Kong at the weekend by a Chinese effort to provide mainland 'security' apparatus with a greater role in the city and financial hub in a further demonstration of blatant disregard for the one-country-two-systems settlement that can only strain U.S.-China relations even further. If not China's relations with the rest of the world, a slice of which is seeking an inquiry into the origins and international handling of the coronavirus.

China is legislating for its security services to have a direct role in the city at a time when trade tensions are rising between the world's two largest economies again, placing January's 'phase one deal' and the global economic recovery out of the coronavirus trough in doubt. This might not bode well for risk appetite or a Euro that's testing the de facto floor of its post-financial-crisis ranges. The Euro has been trading in a tight 1.08-to-1.10 range for much of 2020 if March volatility is put to one side."

"We saw a notable rejection from the market at levels just above 1.1000 and while that might deter upside potential, there remains reason to think the support on the downside is building. The EUR/USD range may have shifted somewhat to the upside," says Derek Halpenny, head of research, global markets EMEA and international securities at MUFG. "The shift is more about turning less negative and believing in greater downside support rather than believing in strong upside potential." 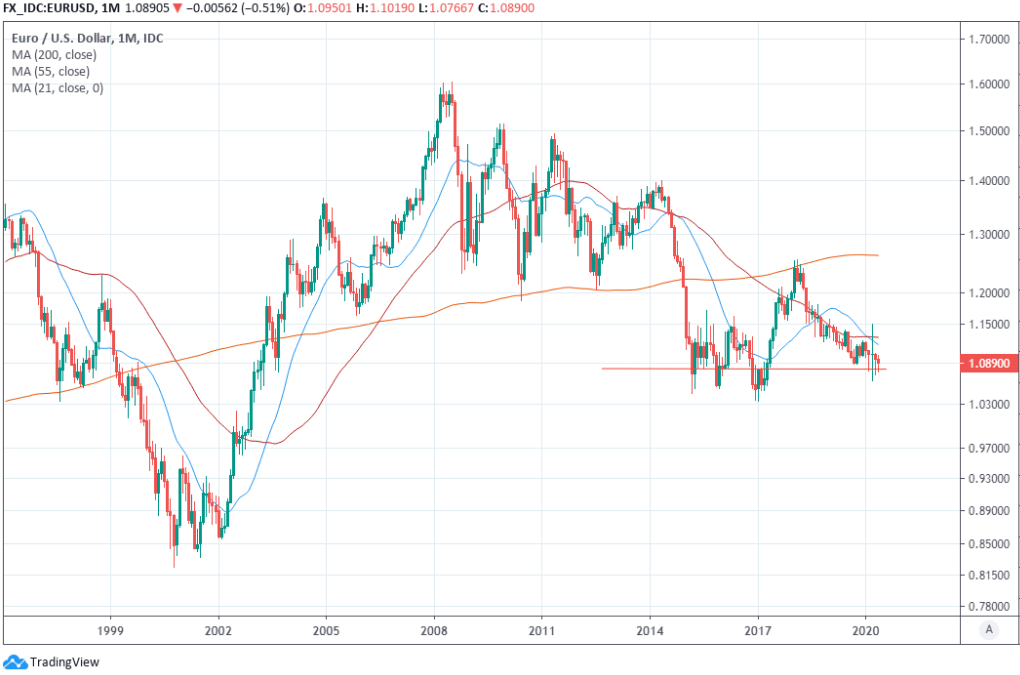 Above: Euro-to-Dollar rate shown at monthly intervals with 200, 55 and 21-month averages. Trendline drawn at 1.08