- EUR could target 1.10 if risk appetite remains robust this week.

- But to struggle above as range ceiling elicits fresh EUR selling.

The Euro-to-Dollar rate stabilised ahead of the weekend and is now tipped by technical analysts to target the top of its April range over the coming days, although the upside  could be limited by increasing political headwinds.

Europe's single currency reclaimed the 1.08 handle on Friday as the Dollar weakened in response to claims of progress by the U.S. and China in efforts to implement the phase one deal struck in January, which stoked risk appetite, as well as speculation about a possible shift to negative interest rates at the Federal Reserve (Fed).

A record-breaking April job loss revealed by the non-farm payrolls report also helped the Euro-to-Dollar rate higher into the weekend and the single currency is now tipped to target the top of its April range over the coming days, although 1.10 is seen offering resistance and might even elicit fresh selling given mounting political headwinds.

The latest of those is a German Constitutional Court ruling that's placed a question mark over the legality of the European Central Bank (ECB) quantitative easing programme at a time when the central bank is the only thing standing between 'periphery' bond markets and unsustainable increases in government borrowing costs that could threaten financial stability. 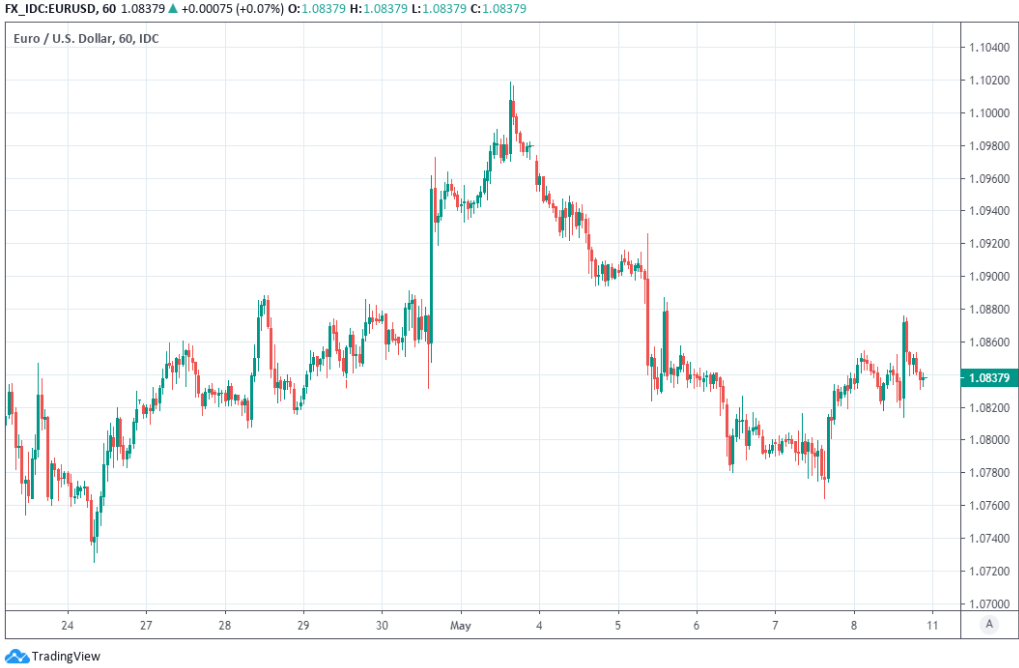 Above: Euro-Dollar rate at hourly intervals.

The Euro will enter the new week trading just above the 1.08 handle Monday and with French citizens being able to take their first steps outdoors without needing a written permit granting them permission for their journey. Some Spaniards will also see restrictions on movement and activities further relaxed as the continent takes frequent but small steps back toward some semblance of normality although with investors on edge about the risk of a second wave of infections being triggered by the reopening.

"Price action over the last two weeks has built a trading band for the EUR roughly between 1.08 and 1.10 with today’s moves suggesting nothing new as the EUR now heads toward the channel’s ceiling. Resistance is roughly 1.0865 followed by 1.0890/900 while support is the intraday low of 1.0819 and then 1.0785/800," says Juan Manuel Herrera, a strategist at Scotiabank.

The Euro has been trading in a narrow 1.08-to-1.10 range since early April and baby steps back toward normality might help lift it toward the top of that range early in the new week, although a lot depends on the mood in broader global markets as well as developments in Frankfurt, Karlsruhe and Brussels.

"Two of Europe's top courts arguing about the legality of bond-buying in the middle of a pandemic inject uncertainty into a market that doesn't need it and does nothing to boost confidence. The euro's chance of breaking back above its 200-day average at USD1.1030 any time soon seem even more remote," says Kit Juckes, chief FX strategist at Societe Generale. "EUR/USD is likely to be stuck in a low range for now."

Germany's top court has given the Bundesbank a viable road to withdrawing its participation in the ECB's QE programme if the Frankfurt-based institution cannot demonstrate within three months that it assessed and found its own actions to be proportionate at the time it launched the bond buying scheme in January 2015. Failure to do this would risk seeing the bank's most meaningful monetary policy leaver neutred and its coronavirus crisis response sabotaged. 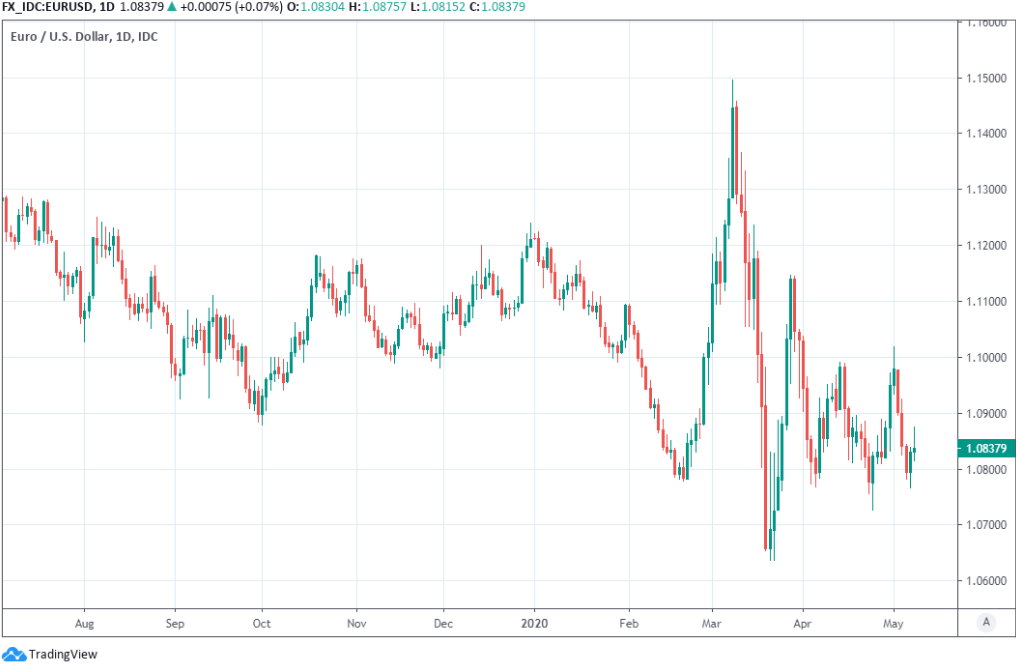 Above: Euro-Dollar rate at daily intervals.

The Euro-to-Dollar rate turned higher ahead of the weekend owing to weakness in the Dollar and to the extent that the greenback remains in retreat over the coming days, the single currency may be able to advance further . However, constitutional lawfare and political disunity have seen forecasts coming under threat and could weigh on the single currency for months yet.

"We also remain unconvinced of buying EUR/USD due to the, pardon our French, ongoing freakshow in the Euro area. The German head of the EU Commission, Ursula Von Der Leyen, is now openly battling her mother countries’ constitution as she hinted that Brussels is considering taking legal steps that could result in Germany being sued in Europe's highest court over the ruling from its constitutional court on ECB bond buying in a letter to the German Press Agency. Never underestimate the arrogance of EUR-crats," says Andreas Steno Larsen, a strategist at Nordea Markets.

Europe's single currency was already being weighed down by a sluggish and fractious response to the coronavirus from Eurozone leaders who're yet to provide a meaningful fiscal backstop that limits the extent to which heavily indebted 'periphery economies' need stretch their already impaired balance sheet to preserve what's left of their economies following two months of 'lockdown' that's brought on an unprecedented sudden economic stoppages.

Finance ministers signed off on a €540bn aid package on Friday but disagreements over whether to finance a European recovery fund through mutualised debt have stoked tensions at the political level and left markets concerned about debt sustainability in the Eurozone again. The aid monies are expected to be available to Eurozone economies by June 01 although the design of the recovery fund is being carried out by the European Commission and wasn't clear on Friday when or even whether it would materialise.

The economic highlight of the week ahead will be the release of German GDP data for the first quarter at 07:00 on Friday, and economists are looking for a -2.3% contraction. However, the mood among investors and the resulting appetite for risk assets like stocks and commodities will also be an important driver of the Euro-to-Dollar rate due to its impact on demand for the greenback. 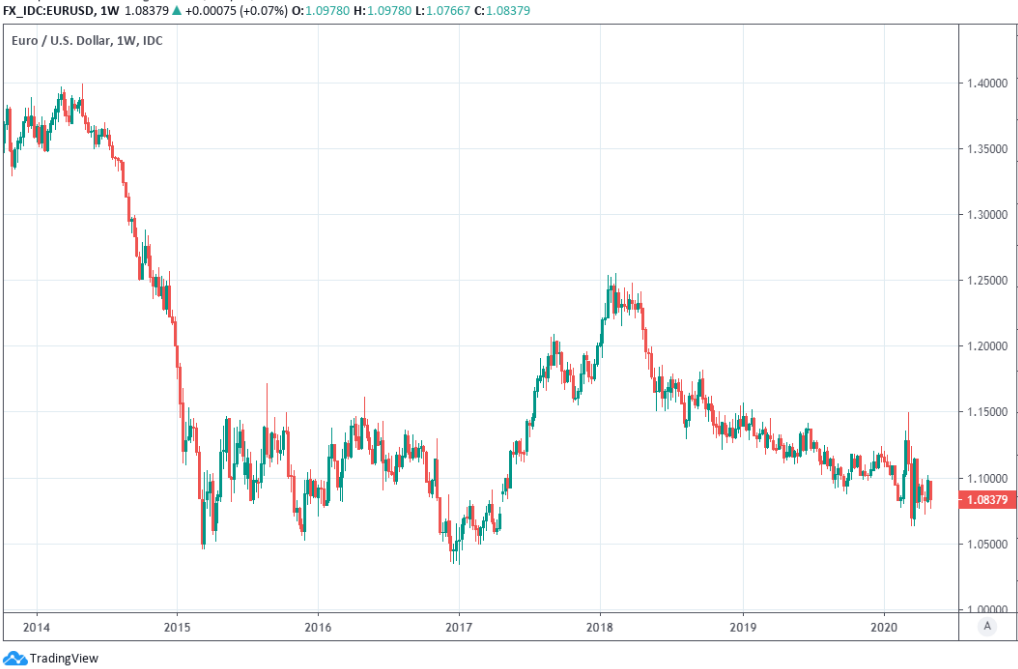 Above: Euro-Dollar rate at weekly intervals.