- Risk assets remain on back foot on coronavirus spread.

The Euro-to-Dollar rate extended last Friday’s bounce off its long-term uptrend on Tuesday, with many risk assets still on the back foot amid ongoing concern over the spread of coronavirus outside of China after outbreaks were confirmed in South Korea, Japan and Italy among others.

Italy has quarantined towns and villages in its Northern regions in an effort to halt the spread of the virus, the first sign in Europe of the same kind of disruption that's brought China's economy near to a standstill this year.

China’s reported numbers of new coronavirus cases are in decline but its economy has been badly damaged by the disease after efforts to combat it turned large cities into ghost towns. 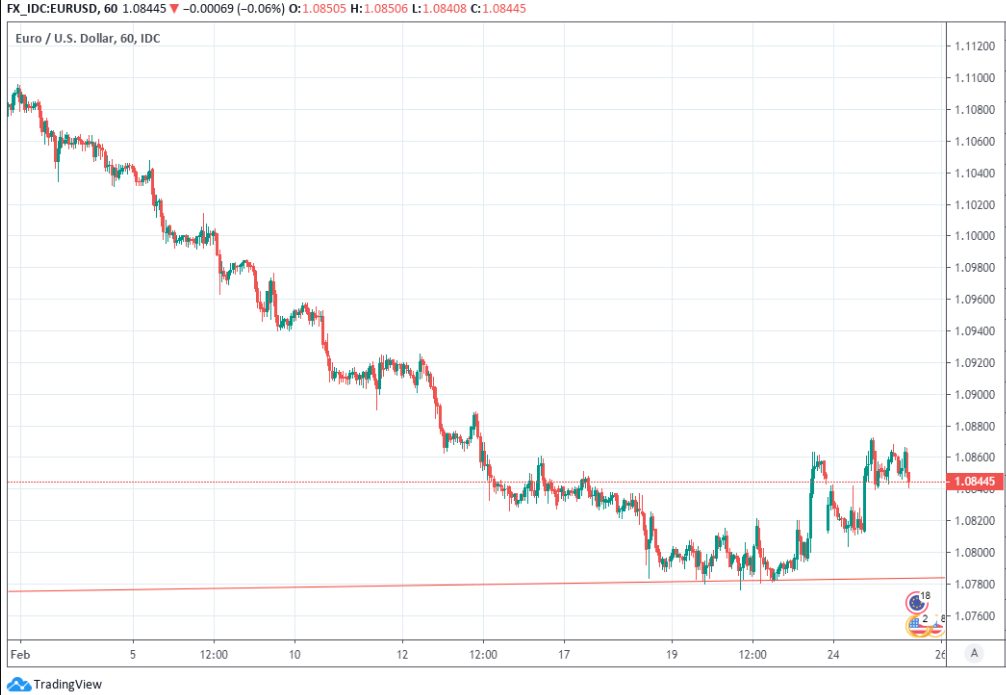 Traffic in the Chinese capital Beijing was indicated Tuesday to be 49% below typical levels despite efforts by the government and firms to encourage staff back to work, while risk assets remained soft after punishing losses to open the week on Monday.

“The Euro, like the Japanese Yen and Swiss Franc, is a popular funding currency, used to borrow cheaply (due to interest rates) in order to buy higher yielding but riskier assets. This is a common strategy in stress-free market conditions known as a “carry trade”. However, in stressful and risky conditions, these trades are reversed, effectively boosting demand for the funding currency once more,” says George Vessey, a currency strategist at Western Union.

China's apparent slowdown has stoked fears for the global economy, sending investors flocking to the safety of the bond market and boosting safe-havens, while weighing on risk currencies.

And with Italy unable to identify“patient zero” the prospect of the disease spreading in Europe as it did in China could be a risk for the Euro, as it hovers above a key trendline that needs to remain intact to avert further notable losses.

But for now the Euro is benefiting from better economic newsflow and a reversal of “carry trades” that had pushed it lower when the market mood was brighter, while the charts are indicating the bounce can endure for a while yet. 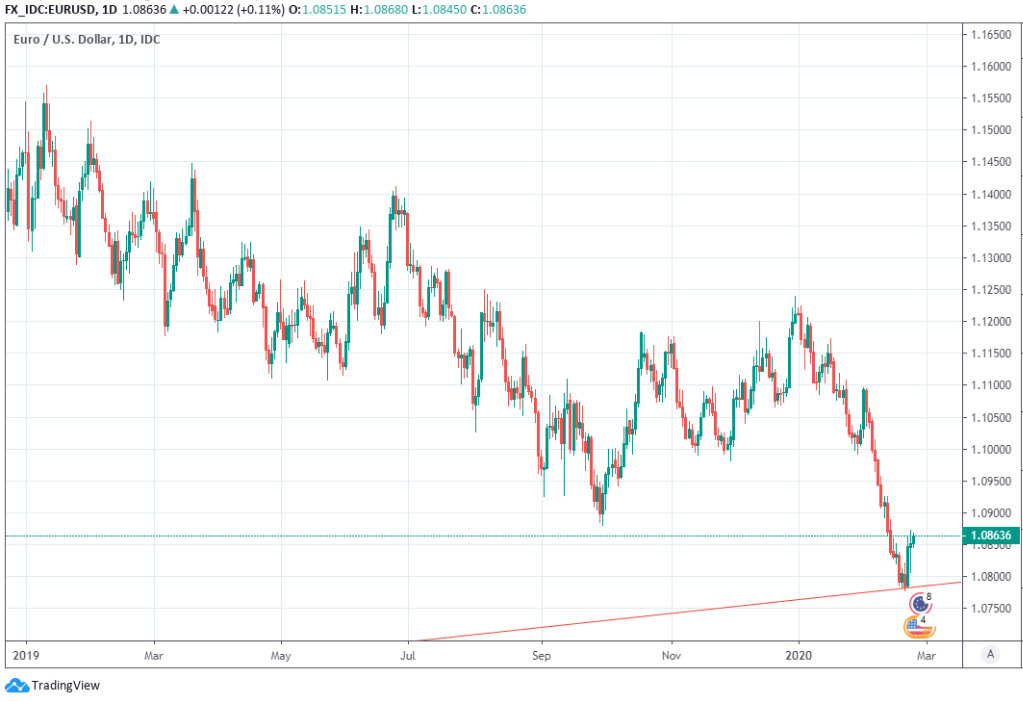 “EUR/USD is attempting to recover just above the 1.0763 2000-2020 uptrend. This is key support and we look for it to hold the downside and provoke reversal. Near term rallies will need to regain 1.0879 (the October low) as an absolute minimum in order to alleviate immediate downside pressure,” says Karen Jones, head of technical analysis for currencies, commodities and bonds at Commerzbank. "Resistance can now be seen at 1.0926, the September low.

Germany’s Ifo index rose by a fraction for the month of February on Monday just days after IHS Markit PMI surveys indicated that Europe’s manufacturing sectors were resilient in the face of the coronavirus disruption this month, which helped to rescue the Euro from its lowest levels since 2017.

Many of Europe’s economies including Germany slowed in the final quarter of 2019 and fears for them have mounted in line with the spread of the coronavirus inside and outside of China although so far the mainly sentiment focused data indicates those concerns may be misplaced.

And meanwhile, political developments in Germany are also now becoming a source of upside risk for the single currency as the Christian Democrats party moves to elect a new successor for the Chancellor Angela Merkel after Annegret Kramp-Karrenbauer’s resignation.

“The election of a new party leader comes at a time when the outlook for Germany’s economy is darkening,” says Lee Hardman, a currency analyst at MUFG. “Should coronavirus related disruption result in a more persistent and deeper slowdown in Germany; it will increase pressure on the government to loosen fiscal policy to provide more support for growth. A shift to looser fiscal policy would be welcomed by market participants and could provide more support for the euro. As we have seen recently in the UK, the pound is been benefiting from building expectations for looser fiscal policy when new Chancellor Rishi Sunak announces his first budget on the 11 th March.” 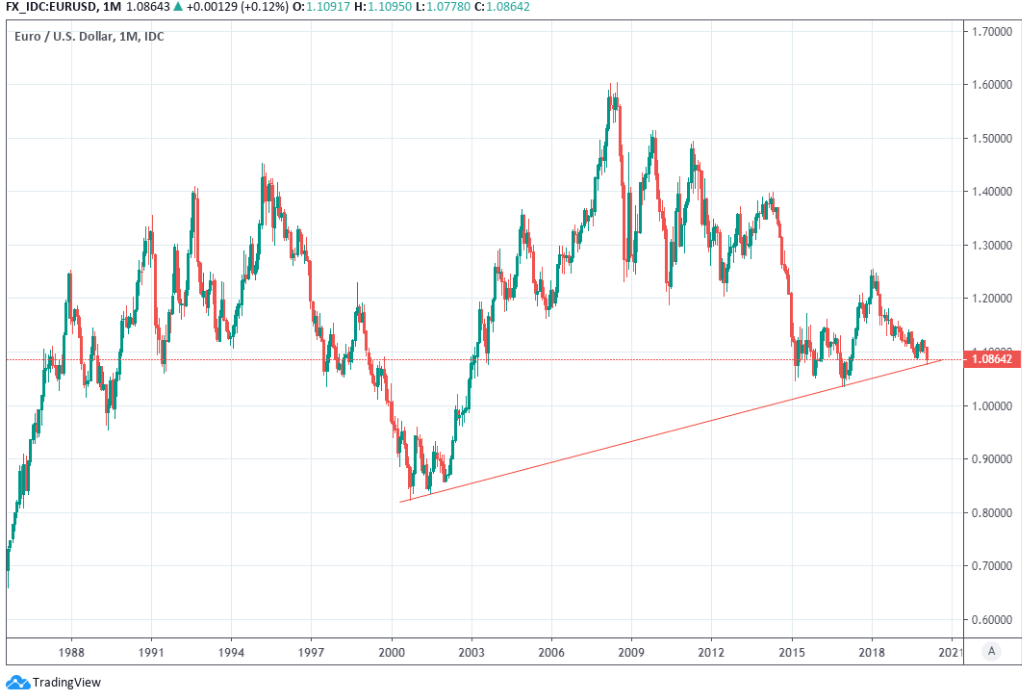