Foreign exchange strategists with Wall Street-based investment bank Morgan Stanley are tipping the Euro-to-Dollar exchange rate to rally in 2020, as European economic growth picks up and starts to outperform that of the U.S.

The Euro-Dollar exchange rate fell to a multi-year low of 1.0825 on October 31, but has since been ticking higher and is quoted at 1.1063 at the time of writing. Despite the stronger values commanded by the Euro, there remains the sense that the single-currency continues to struggle to find upside impetus. Indeed, the exchange rate was quoted as high as 1.1150 at the start of November.

However, a number of factors should conspire to deliver a more robust recovery in the Euro next year says Morgan Stanley.

"Eurozone growth is expected to pick up as US growth starts to slow, benefiting EUR/USD particularly as market expectations for eurozone growth are fairly low," says Redeker. "U.S. growth is likely to slow modestly further into 2020 as fiscal tailwinds fade, while European data may exceed the market's low bar." 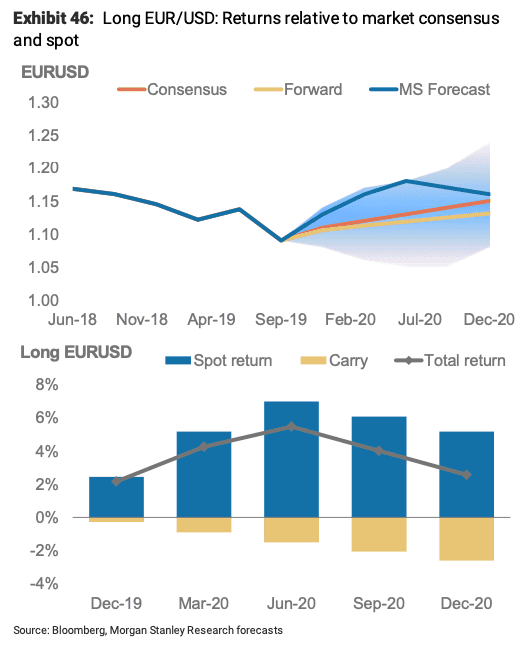 Eurozone growth has been anaemic in 2019, largely owing to a slowdown in the German manufacturing sector which has suffered on the back of trade tensions, Brexit uncertainty and a slowdown in Chinese economic activity. This has all taken a heavy toll on Germany’s export-driven and manufacturing-heavy economy.

However, third-quarter data readings suggest that the Eurozone economy might have found its bottom, and a turnaround is being seen by some economists.

"Recent leading indicators have provided tentative signs of optimism that the German economy is close to the worst point and could begin to pick up gradually in 2020... the improving euro-zone data flow has not been sufficient to encourage a stronger euro at the current juncture," says Fritz Louw, a currency analyst at MUFG.

Morgan Stanley say that improved economic performances out of the Eurozone will likely translate into increased bond yields on Eurozone sovereign debt, particularly German sovereign debt (bunds), which should in turn support the Euro.

"A less dour market outlook for Europe is likely to manifest itself in a steeper Bund curve," says Redeker.

However, there are other Euro-supportive drivers to be aware of adds Redeker: "We think political factors will increasingly support EUR/USD. A 2020 resolution to Brexit should reduce economic uncertainty for the UK and its major trading partners, including the euro area. Meanwhile, we anticipate continued momentum towards greater fiscal integration. We believe the ECB has neared the limits of monetary policy easing, leaving fiscal policy as a candidate to support future growth."