- ZEW expectations index nearly back in black this month.

- But U.S. yields and overtures of USD too much for EUR.

The Euro ceded ground to the Dollar Tuesday even after the influential ZEW survey provided further cause for optimism about the continental economic outlook as the allure of U.S. bond yields and overtures of the greenback proved too much for the single currency to bear.

The ZEW six-month expectations index rose 20.7 points this month to -2.1 while the current situation component increased from -25.3 to -24.7, with the latter being a slight miss against expectations. The survey readings for the broader Eurozone also turned higher in November too, with results collected last week.

"A very solid equity market, and hopes of a deal between the U.S. and China that would actually de-escalate the trade wars likely are the two main drivers of the jump...the tentative evidence of a bottom in German manufacturing activity, and the reduced prospect of a no-deal Brexit, also are contributing," says Claus Vistesen, chief Eurozone economist at Pantheon Macroeconomics. "Time will tell whether these turn into more sustainable tailwinds." 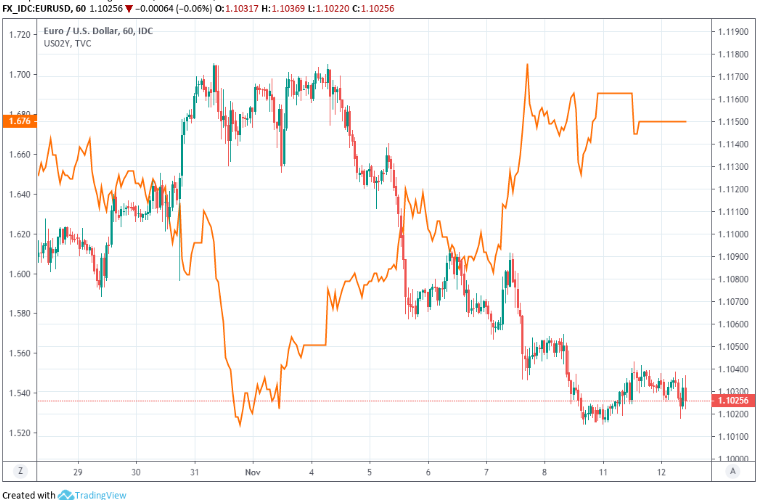 November's increase in the expectations index was attributed by respondents in the survey to the Brexit agreement struck by Prime Minister Boris Johnson in October and reports suggesting President Donald Trump is unlikely to impose tariffs on imports of cars from Europe.

Trump will deliver a short speech on trade at the Economic Club in New York 17:00 Tuesday and there's been speculation that he could further delay, for an additional six months, a decision on whether to impose the tariffs.

The ZEW survey asks 300 financial experts for their opinions on questions relating to the markets and economy. Participants are asked about the current situation as well as their six-months expectations concerning the economy, inflation, interest rates, stock markets and exchange rates. The expectations index has been below its long term average of 21.4 for years now and has sat in negative territory since April 2018, just before the White House began firing tariff announcements in the direction of China.

"If genuine economic data start to confirm the message from markets and financial analysts, we can usually be reasonably confident that better times are ahead again. We detect first signs that this is happening. The economic data is no longer surprising to the downside. Business expectations are – albeit at low levels – stabilising and factory orders are coming in less badly," says Florian Hense, an economist at Berenberg. "If economic policy uncertainty lessens further, the downturn in global industrial production could peter out." 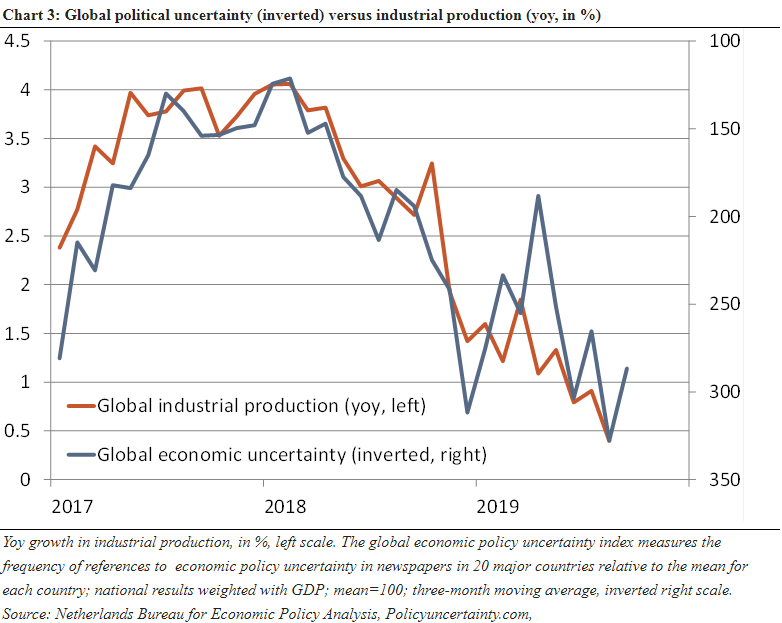 Markets are waiting to hear if Germany's economy fell into recession in the third quarter, with GDP data due out at 07:00 Thursday, although there have been repeated signs of late that a recovery could already be in the pipeline for the first half of 2020. September's industrial production numbers released last week suggested not only that the German economy may have dodged a proverbial bullet but also that a recovery in factory output could be in store for next year.

Those industrial figures came after factory order data also revealed a sharp pickup in new work that month, which is positive for the broader Eurozone outlook because Germany's large economy is a bellwether for the overall bloc. However, Europe's economic outlook has been soothed in recent weeks by hopes of a 'phase one deal' that at least temporarily ends the U.S.-China trade war as well as an agreement averting a 'no deal' Brexit.

And if Trump announces a second delay of his decision on car tariffs then markets could become more optimistic about the outlook for the single currency.

"While expectation of economic growth was better than expected and well off the summer lows. EURUSD still seems to have Abovelined up above 1.1040, so the initial fast-money buying on the better growth expectations evaporated quickly. The pair has good support at 1.1015, and with UST yields on the back foot, there could be a pause in dollar strength. I am slightly biased to be long here," says Thomas Laubscher, a spot FX trader at UBS. 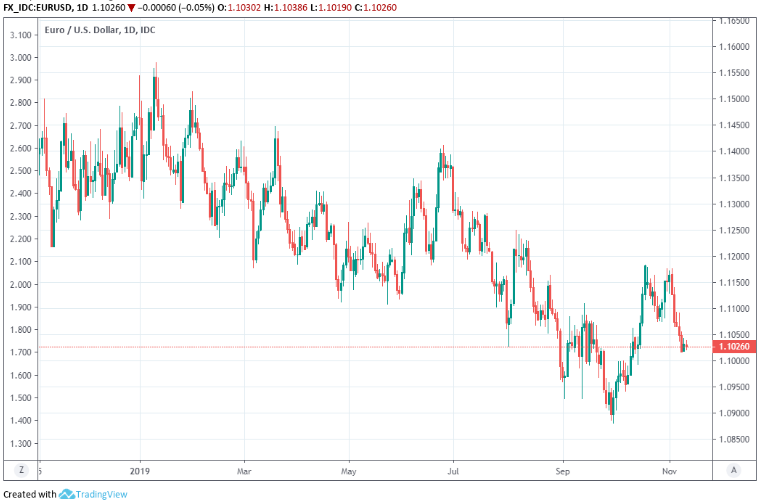 The Euro entered the Tuesday session on the back foot after being weighed down at the opening of the new week by a recovery in U.S. bond yields, which have risen in response to optimism about the prospect of further tariff conflict with China being averted. Those yields were still buoying a resilient Dollar and weighing on the Euro-to-Dollar rate after the ZEW survey but UBS' Laubscher is sceptical that they'll be able to lift the greenback much more.

Europe's single currency has been in retreat for almost a fortnight now after failing several times to overcome a key resistance barrier on the charts, located around the 1.1180 level, earlier in November. And now technical analysts studying trends and momentum on the charts are becoming more cautious in their outlook for the Euro.

"The market has an uphill battle to stabilise and recover. It has now failed for the past 4 weeks at the 1.1180 level, and near term rallies will need to regain 1.1100 in order to trigger a retest of 1.1180," says Karen Jones, head of technical analysis at Commerzbank. "The move lower has neutralised the chart– it is unclear if the market will recover from here to the 200 day ma at 1.1186 and the top of the channel at 1.1269 (however this is slightly favoured as we suspect the slide lower was just an ‘a-b-c’ correction). Or if we will see one more final leg down to the base of the channel at 1.0865 and the 1.0814 Fibo retracement before a sustained recovery is seen."