- EUR inflation and GDP figures surprise on the upside.

- German economy still in doldrums but others stabilise.

- Recent ebbing of Brexit and trade risk is balm to outlook.

- But resurfacing trade war threat may soon spoil the mood.

The Euro was buoyed by a hat-trick of economic treats Thursday as inflation and GDP figures surprised on the upside right after Federal Reserve (Fed) that scrapped its interest rate crown, although resurfacing trade tensions are already threatening to spoil the improved mood around the single currency.

Eurozone GDP growth came in at 0.2% for the third-quarter on Thursday, unchanged from the previous quarter but ahead of a market consensus that was looking for only a 0.1% expansion. Concurrently, Eurostat's measure of core inflation, arguably the most important price statistic, surprised on the upside in what will undoubtedly be a welcome development for the Governing Council of the European Central Bank (ECB).

"Both Q3 GDP and core inflation came in stronger than expected today. This is some good news for Lagarde, but growth remains weak and we expect a standstill in the next quarter," says Inge Klaver at Nordea Markets.

The main inflation rate slipped lower to 0.7% in October, official figures revealed Thursday, down from 0.9% previously but in line with market expectations. But core inflation, which economists and central bankers see as a more reliable reflection of domestically generated price pressures because it excludes energy and other items from the goods basket, rose to 1.1%. That's up from 1% previously and above a consensus that was looking for an unchanged reading.

"The EZ economy performed a bit stronger than we, and markets, expected last quarter, but the labour market was a bit weaker than initially estimated at the end of Q3," says Claus Vistesen, chief Eurozone economist at Pantheon Macroeconomics. "Looking ahead, survey data suggest that the EZ economy remained on the blackfoot at the start of Q4, but long-leading indicators, mainly real M1, point to better times in H1 next year." 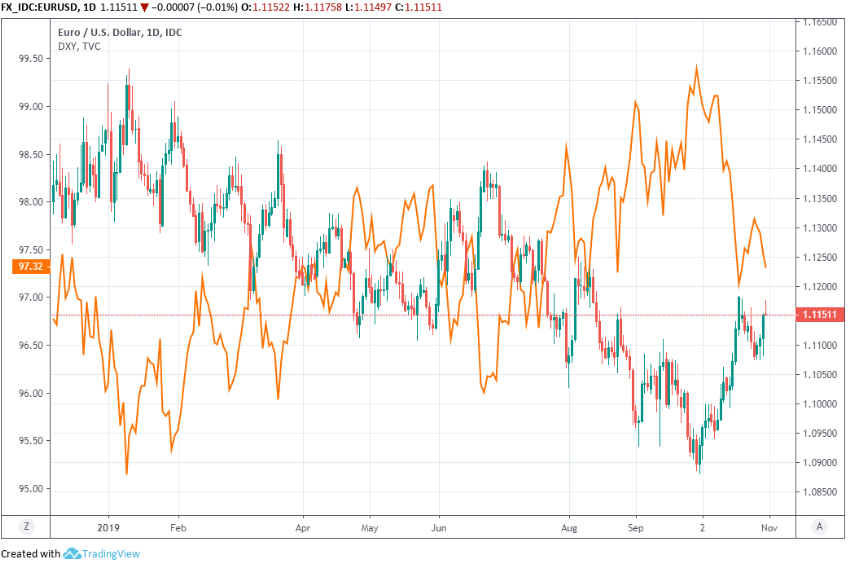 Thursday's figures don't necessarily mark a turning point for the economy on their own but they are nonetheless positive for the Euro, which has been weighed down in recent months by an economy that's slowing in the face of external threats like the trade war and Brexit, as well as the inevitable ECB monetary policy response to those risks. The ECB has cut one of its interest rates further below zero and will resume quantitative easing on November 01 in an effort to stoke faster growth and inflation.

"Base effects in oil prices are now turning, and unless Q4 is as bad as last year, energy inflation will snap back quickly in the next few months. The core rate, meanwhile, is slowly edging higher," Vistesen says. "With yields already up, and expectations for further rate cuts being pushed back, we doubt that this will move the market. It certainly won’t move the ECB’s overall dovish position."

Better growth and inflation figures come amid heavy selling of the Dollar into the weekend, prompted on Wednesday by a third 2019 rate cut from the Federal Reserve, which has been attempting to protect the U.S. economy from the disinflationary forces of the nascent global growth slowdown. The cut has left the Fed Funds rate at 1.75% and means U.S. rates are no longer the highest among so-called G10 countries and the Dollar is no longer the highest yielder among major currencies.

"The market reaction to the FOMC meeting and Powell press conference suggest that the market puts little faith in their policy guidance and is happy to assume that the Fed will provide the necessary easing from here to keep the party going. The US dollar was sharply lower after the FOMC meeting, especially versus riskier currencies," says John Hardy, chief FX strategist at Saxo Bank. "Now the interest will be in how the market treats incoming US data – especially weak data and whether this is seen as cause for concern on risk sentiment (more favouring USD lower versus, for example, the JPY) or if the implications for further Fed easing are instead celebrated."

For the Dollar, having the highest interest rate has proven a draw for not only investors who're seeking yield, but also those wanting a safe harbour to moor up in while the global economy is on its back foot and the trade war rages on. And with the ECB's own rates moving to new record lows as the bank threatens to further crush bond yields with a revamped QE program, the Euro-to-Dollar rate has set new multi-year lows in recent months.

The Euro itself has found support in October after President Donald Trump proclaimed a 'phase one' deal that temporarily ends the trade war between the U.S. and China, and amid what also appears to be a decisive end to threat of a 'no deal' Brexit. The trade war, uncertainty over the UK's exit from the EU and previously-crushing U.S. interest rates had all once played their part in undermining the Eurozone economy, although a resurfacing trade threat was threatening to spoil the Euro's mood Thursday.

"The USD is trading lower towards the end of the London morning, but the currency bounced abruptly off its lows after Bloomberg reported that Chinese officials "doubted" that a long-term US/China trade deal would be possible," says Stephen Gallo, European head of FX strategy at BMO Capital Markets. "The key question therefore is "will today's Chinese headlines be enough to shift things decisively in the opposite direction for the USD?" We're not yet convinced of that, because the other big factor in the global picture right now is the prospect of a Brexit resolution (i.e. another sort of "Phase 1" event)....it would be better to wait for better levels to buy USDs (i.e. sell EURUSD)."