- U.S. rates now on par with Canada, no longer the highest.

- But Fed signalling no more cuts ahead, clouding outlook.

- Markets had banked on two more cuts in months ahead.

- Analyst views on outlook for USD post-decision are mixed.

The Dollar fell broadly Thursday after a third 2019 interest rate cut from the Federal Reserve (Fed) knocked the greenback off its perch as the highest yielding major currency, and although the bank has signalled that no further cuts are ahead, analysts are still divided in their views on the outlook.

The Federal Open Market Committee cut the Fed Funds rate range to between 1.5% and 1.75% Wednesday, in line with market expectations, which has put U.S. rates on a par with those in Canada and means the Dollar is no longer the highest yielding major currency. That could prove to be significant for the market, especially because the decision has come as the U.S. economy slows and amid signs of a possible improvement in economic conditions elsewhere.

Fed Chairman Jerome Powell gave the clearest indication yet of the lengths to which the bank is willing to go in order to support the economy through a soft patch when he said it would take a material reassessment" of the outlook for any further policy changes to become appropriate. The Fed had already effectively told markets that it's done cutting U.S. rates by deleting from its regular statement, the line claiming it'll "act as appropriate to sustain the expansion."

....our manufacturers. We should have lower interest rates than Germany, Japan and all others. We are now, by far, the biggest and strongest Country, but the Fed puts us at a competitive disadvantage. China is not our problem, the Federal Reserve is! We will win anyway.

With markets still betting on more cuts coming in the months ahead, that should have been positive for the Dollar. Having the highest interest rate among so-called G10 currencies has proven a draw for not only investors who're seeking yield, but also those wanting a safe harbour to moor up in while the global economy is on its back foot and the trade war rages on. And Wednesday's rate cut had been anticipated, while the Fed now says no more are in the pipeline.

"So if this was a “hawkish cut” why did the dollar weaken? We would cite two reasons. Firstly, the desire of the FOMC to pause can only be met if the incoming economic data allows. We would argue that the risks are still more to the downside than the upside," says Derek Halpenny, European head of global markets research at MUFG. "Secondly, there remains the optimism over some degree of de-escalation in global trade tensions. A partial deal between the US and China is still a reasonable prospect and no-deal Brexit risks have clearly diminished...We see solid support in EUR/USD being maintained." 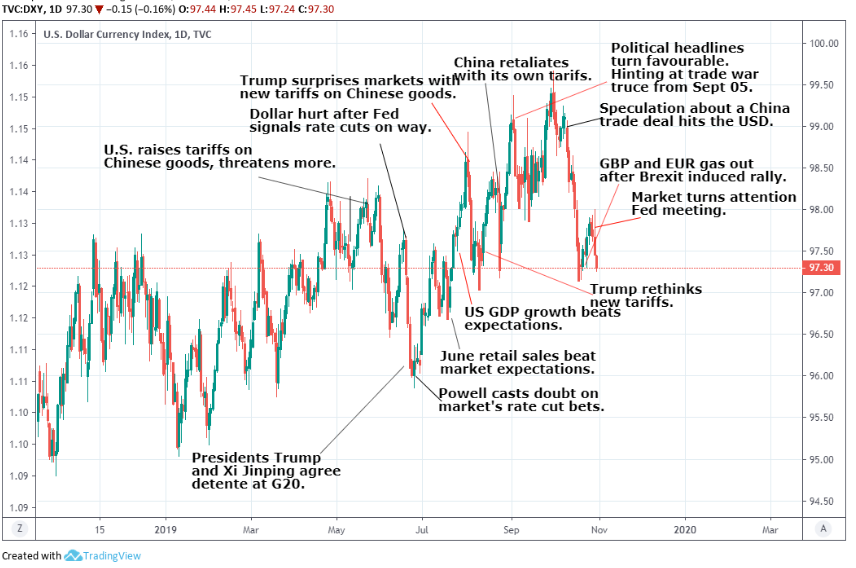 Halpenny says the recent brightening of the global backdrop is limiting investors' appetite for the Dollar and that such improvement, which has been concentrated in the Europe whose Euro accounts for more than half the Dollar Index, should provide solid support to the Euro-to-Dollar rate for as long as it continues. French third-quarter GDP growth beat expectations Wednesday while the nascent ebbing of 'no deal' Brexit and trade war risks is balm to the outlook for the Eurozone. Inflation and GDP figures also surprised on the upside Thursday.

The FOMC acknowledged the improving global backdrop Wednesday, although Thursday's morning session brought with it fresh tape bombs on the trade war side, with Bloomberg News reporting that China is unwilling to move onto 'phase two' of the negotiations with the U.S. or to entertain structural changes unless the White House removes all of its tariffs from the country's exports.

The Dollar has done well from the trade war so there could be scope for the developing story on the negotiations to turn the tide in favour of the greenback and against the Euro. However, not everybody sees Wednesday's decision from the Fed as a negative for the greenback and some are tipping the Dollar for a turnaround as a result. Mark McCormick, head of FX strategy at TD Securities, was unconvinced after the announcement that the recent ebbing of Brexit and trade tensions marks a turning point for the global economy.

"The Fed has effectively noted that the bar to cuts is very high. In being patient, we think markets will struggle to define a timetable for this stance. As such, we think the USD should recalibrate tactically higher as a result even though the post-Fed reaction has been mixed," McCormick wrote in a note to clients. "The EUR — a pro-cyclical currency — is unlikely to find escape velocity to the topside anytime soon with the threat of more ECB cuts amidst inexplicably weak inflation expectations. This should leave the common currency an attractive funder at large. Going forward, we think this should reinforce 1.12 as a key resistance marker for EURUSD." 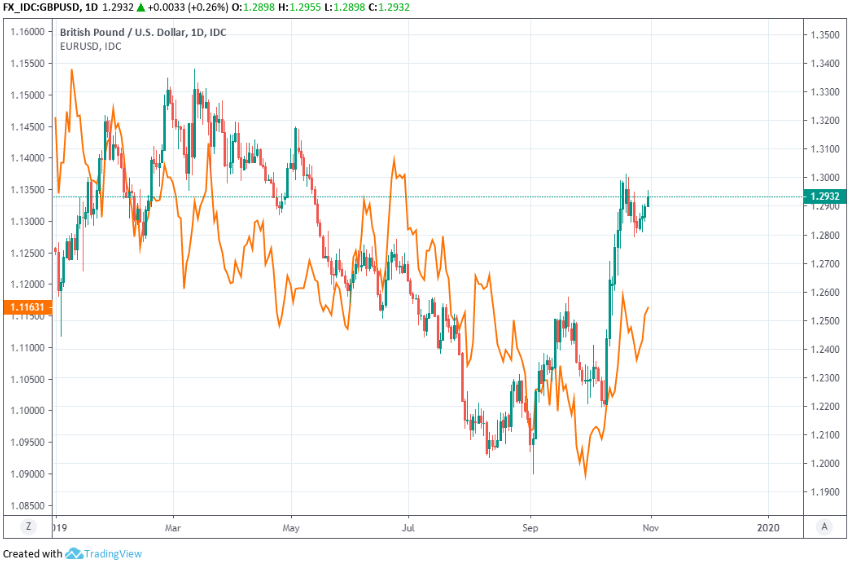 U.S. data emerging from the domestic side of the economy has been resilient in recent months while figures coming out of the export side have deteriorated markedly as the factory sector has been hurt by both a global economic slowdown as well as the strong Dollar. That story was borne out again in third-quarter GDP figures Wednesday, with consumer spending producing faster growth than was expected even as business investment slumped.

But many doubt the consumer can continue to prop up the economy on its own and the Fed's preferred measure of U.S. inflation has ran persistently below the 2% target this year. Some economists say inflation will rise above that threshold in 2020 but the financial markets were on Thursday, still betting the Fed will slash rates twice more within the next nine months or so.

"Surprisingly, the dollar weakened overnight in response to the Fed’s hawkish cut. This is likely to be a function of (a) market hopes that the US economy, and in turn global economy, won’t deteriorate from here, as per Fed’s reasoning; (b) re-pricing of dovish outlook for other central banks - as with the Fed signalling being on hold for now, the case for other banks to cut, is limited. This creates room for a short squeeze in the oversold NZD. Yet, if the US / global economy slows further, the reasoning behind the current G10 FX rally and USD decline will fade," says Chris Turner, head of FX strategy at ING. "Our economists expect the US slowdown to intensify, eventually increasing the case for another insurance rate cut."