- Rallies a chance to sell the pair at better price

The Euro-to-Dollar rate keeps grinding lower and rallies in the Euro provide a good opportunity for traders to buy the U.S. currency at a relatively cheap price before it appreciates further, shows research by Richard Perry, a market analyst at Hantec Markets.

Analysing the EUR/USD pair, Perry notes that it is "still in a rolling-over phase once more," as it rises and falls in its gently descending bearish channel.

Most recently the pair looked like it might be basing but then the market "got pulled from the bottom of the trend channel to the top," before rolling over after touching 1.1100. Since then it has plunged even deeper on negative economic data from the Eurozone. 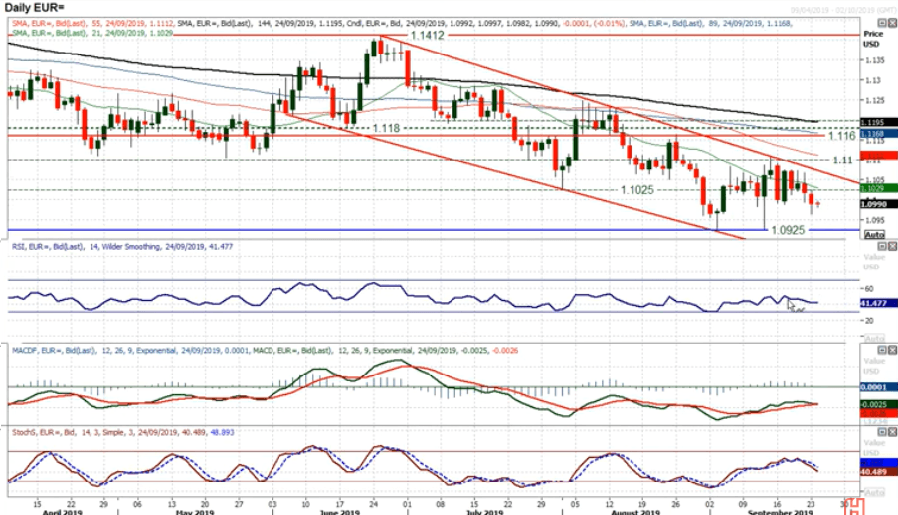 "We have had a couple of negative candles. We can also see the old supports are becoming the basis for resistance: 1.1100 big figure, 1.1025 was to the pip yesterday’s high. So we are starting to see these levels coming in as resistance overhead. Rallies are a chance to sell," says Perry.

On lower time frames such as the hourly chart below, the picture is also bearish as the pair consolidates in a range and looks vulnerable to breakdown. 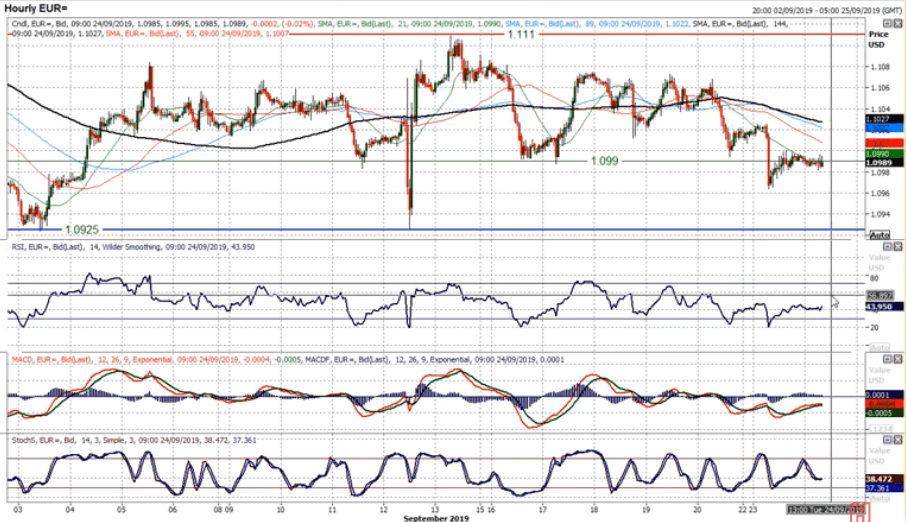 The RSI has fallen under 50 - the indicator’s mid-point and this slightly biases the pair to more downside.

The MACD is falling too, and stochastics are posting a "bear cross and beginning to decline quite decisively" says Perry.

Given the falling price and momentum, everything seems to be pointing to yet more downside, with a move below 1.0990 opening the way to a decline down to the next target at 1.0925, according to Perry.

The Euro-to-Dollar exchange rate came under renewed pressure at the start of the week, with Eurozone economic data prompting the pair to fall below the psychologically significant 1.10 level, leading and some foreign exchange strategists to look for further downside to emerge for the pair.

The Euro was offered after Germany’s composite PMI dropped to 49.1 in September. This was the first reading below the 50 threshold since April 2013, and economists suggest the number is consistent with a contraction in the country's economy.

"Growth is slowing dangerously, demand is weak and monetary policy is all out of gas. And until or unless fiscal policy is brought to bear, the Euro remains vulnerable," says Kit Juckes at Société Générale.

"The EUR is under renewed pressure to start the week after a dismal set of preliminary PMI readings from the region's largest economies (see below). EURUSD has traded lower through the 1.0980/90 minor support zone as a result.

"This suggests a test of the lows a hair above 1.0925 is starting to look more likely. A clear break lower would target a possible extension down toward 1.0820/40."

However, Stephen Gallo, a Strategist with BMO Capital Markets in London prefers playing the Euro-Dollar from the top side, looking to sell into any emergent strength.

As such, patience is warranted:

"On a tactical basis, we think the best option heading into Q4 - especially if you have a bullish USD bias - is to do nothing for now. What is rather unfortunate is that this saga of waiting to see how "big events" unfold is quite likely to stick with us for months and quarters to come, with the obvious risk that FX implied volatility continues to get crushed in the process.

"We think that tactical bias is more or less justified by what leveraged money positioning data show, which is effectively a preponderance of net-long USD and JPY exposures on multiple axes (i.e., the "bad news" trade). But 1.1050/1.1100 in EUR/USD should be seen as a "gift horse" for EUR selling opportunities."