The Euro-to-Dollar exchange rate came under renewed pressure at the start of the week, with Eurozone economic data prompting the pair to fall below the psychologically significant 1.10 level and some foreign exchange strategists are looking for further downside to emerge for the pair.

The Euro was offered after Germany’s composite PMI dropped to 49.1 in September. This was the first reading below the 50 threshold since April 2013, and economists suggest the number is consistent with a contraction in the country's economy.

Meanwhile, the Eurozone composite PMI underwhelmed expectations in September and fell to a 75‑month low of 50.4, against consensus expectations for a reading of 52.0.

"Growth is slowing dangerously, demand is weak and monetary policy is all out of gas. And until or unless fiscal policy is brought to bear, the Euro remains vulnerable," says Kit Juckes at Société Générale.

"The EUR is under renewed pressure to start the week after a dismal set of preliminary PMI readings from the region's largest economies (see below). EURUSD has traded lower through the 1.0980/90 minor support zone as a result.

"This suggests a test of the lows a hair above 1.0925 is starting to look more likely. A clear break lower would target a possible extension down toward 1.0820/40." 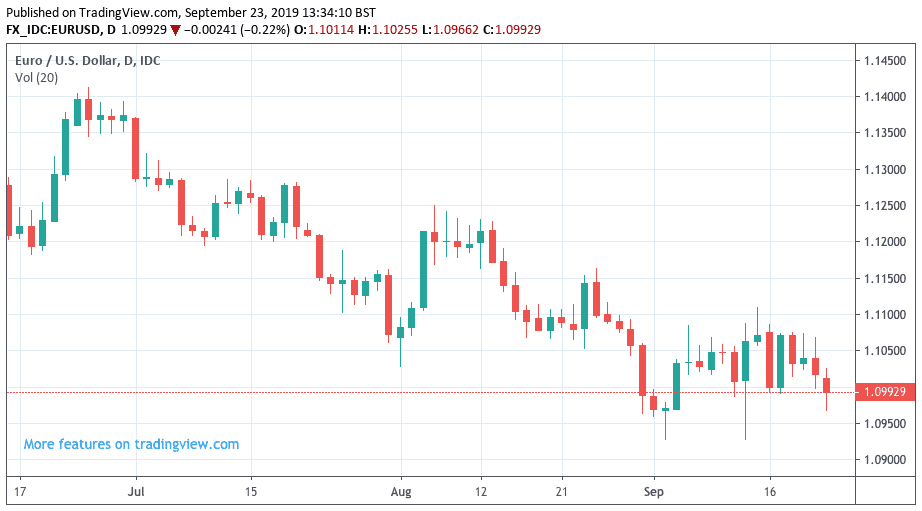 However, Stephen Gallo, a Strategist with BMO Capital Markets in London prefers playing the Euro-Dollar from the top side, looking to sell into any emergent strength.

As such, patience is warranted:

"On a tactical basis, we think the best option heading into Q4 - especially if you have a bullish USD bias - is to do nothing for now. What is rather unfortunate is that this saga of waiting to see how "big events" unfold is quite likely to stick with us for months and quarters to come, with the obvious risk that FX implied volatility continues to get crushed in the process.

"We think that tactical bias is more or less justified by what leveraged money positioning data show, which is effectively a preponderance of net-long USD and JPY exposures on multiple axes (i.e., the "bad news" trade). But 1.1050/1.1100 in EUR/USD should be seen as a "gift horse" for EUR selling opportunities."