- J.P. Morgan warns of downgrades and dip below 1.10 handle.

The Euro was trading a fraction higher Monday and could go on to reclaim more ground previously lost to the Dollar this week if the Federal Reserve (Fed) cuts its interest rate Wednesday but these gains won't last, according to analysts at Nordea Markets and J.P. Morgan.

Europe's single currency has been tipped as a sell at both Nordea and J.P. Morgan because the Eurozone's economic problems are expected to necessitate much more radical monetary policy action than the U.S. Federal Reserve is seen delivering this week, which will ultimately drive the Euro-to-Dollar rate lower.

Eurozone GDP figures for the second quarter will be released on Wednesday and consensus is for the quarterly growth rate to have fallen from 0.4% to 0.2%, representing a 50% loss of momentum. This would take the annual growth rate down from a level that was comfortably above 1% to one notably below it.

"The latest Euro-area PMI numbers made for pessimistic reading. The figures suggest downside risks to the ECB’s June growth estimates, and PMI composite has been in easing territory since October 2018, no wonder the ECB is gearing up to do more," says Andreas Steno Larsen, a strategist at Nordea. "We wouldn’t be utterly surprised if the ECB opts for an open-ended QE-version including a concrete inflationary threshold for ending the balance sheet expansion – almost BoJ style!"

The contrast between the economic picture on the two sides of the Atlantic could barely be more stark. U.S. second quarter GDP growth slowed from 3.1% to 2.1%, which is a reduction of almost 30% but still leaves the economy growing a far faster pace than the single currency bloc.

And the European slowdown, which has its roots in the German industrial sector, could get worse this summer if water levels on the river Rhine go the same way as they did last year. Lower water levels on the Rhine can restrict the supply of materials to factories and further reduce output from an important but already-troubled sector. 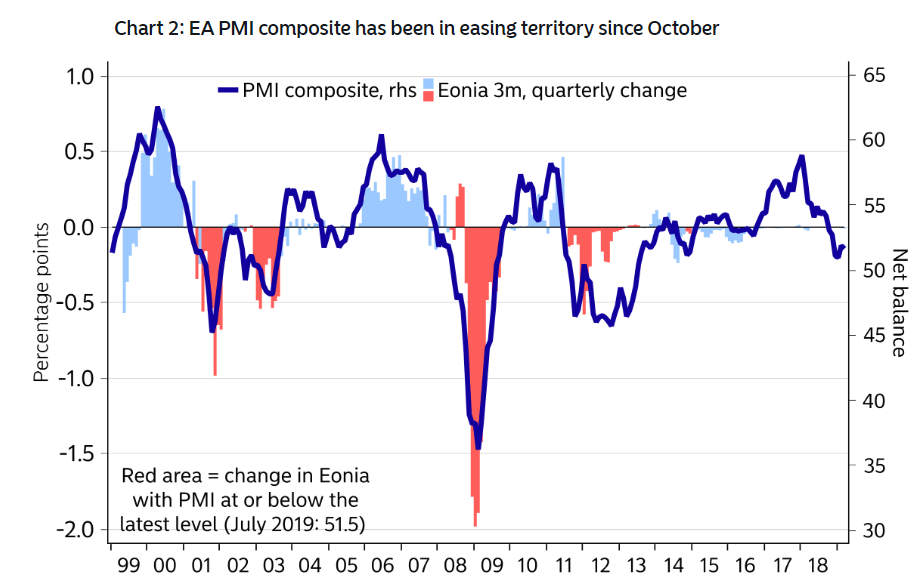 Germany's industrial sector has been in recession since the final quarter of 2018 and GDP growth has slowed rapidly as a result, even though the services industry has held up relatively well. Eurozone GDP growth fell from 2.3% to 1.8% in 2018, but the European Commission now forecasts just 1.2% this year.

"Water levels in the Rhine and its tributaries are receding once more. Low water levels in the Rhine held back German industrial production and risks doing so again this year, perhaps unless ECB manages to fill the rivers with liquid(ity) from the Eurosystem. This represents another downside risk for the Euro-area," Larsen says. "If EURUSD rallies on a dovish Fed message this week (we think it will), it could make sense to build new EURUSD tactical shorts."

The German and European industrial sectors were badly hurt by the U.S. trade war with China last year and could yet be further damaged by White House trade policy. President Donald Trump threatened last week to impose tariffs on French wine in retaliation for a new tax targeting internet companies, which are mainly American.

France just put a digital tax on our great American technology companies. If anybody taxes them, it should be their home Country, the USA. We will announce a substantial reciprocal action on Macron’s foolishness shortly. I’ve always said American wine is better than French wine!

President Trump has also given the EU a 180-day ultimatum period during which Brussels can either agree to lower its tariffs on car imports from America and begin talks about providing U.S. companies access to Europe's agricultural market, or face tariffs on cars exported to the U.S.

These trade threats are looming over the Euro at a time when the economy was already slowing and the EU is attempting to negotiate the exit of one of its largest members from the bloc, with talks likely to come to a head in the final quarter, just as the U.S. tariff deadline is set to expire. 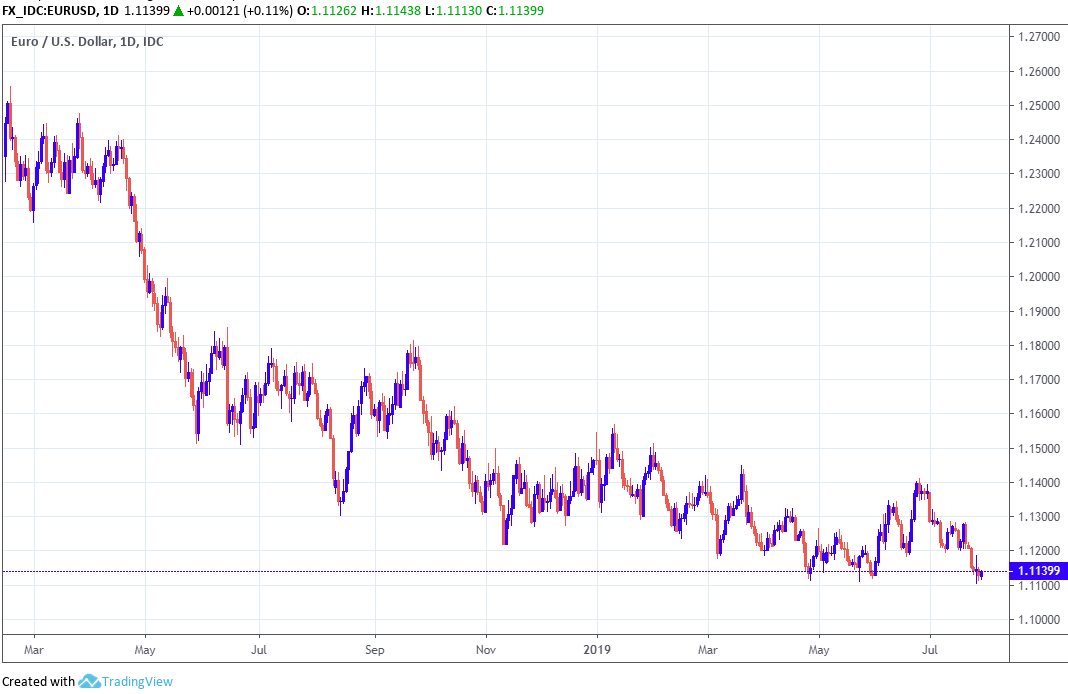 "Last week we revised down our EUR/USD forecasts (1Y from 1.17 to 1.15) on account of the protracted weakness in the economy. The frankly alarming message from the slump in the German PMI and IFO releases confirms that the risk to these forecasts is very much to the downside," writes Paul Meggyesi, head of FX strategy at J.P. Morgan, in a note to clients.

The influential Institute for Economic Research warned on the outlook for the German economy last week right after IHS Markit PMI data suggested the ongoing recession in the German manufacturing sector deepened in July, both of which indicate that growth may have slowed even further in the third quarter.

That downbeat message was reiterated by European Central Bank (ECB) President Mario Draghi last week when he said the Eurozone economic outlook is getting "worse and worse". He singled out manufacturing and those countries where manufacturing is important for growth as suffering the greatest.

The E.U. and China will further lower interest rates and pump money into their systems, making it much easier for their manufacturers to sell product. In the meantime, and with very low inflation, our Fed does nothing - and probably will do very little by comparison. Too bad!

This is why the ECB has now tasked staff with devising a "tiered system for reserve remuneration" that would enable it to cut the deposit interest rate further below zero without hurting the profitability of commercial banks and considering "options for the size and composition" of a new quantitative easing program.

"Our economists assume that Draghi will eventually win-over the hawkish sceptics on the council and have changed their forecast to include a fresh round of QE alongside a 10bp rate cut in September. We are holding off making any immediate additional changes to the EUR forecasts pending clarification of how the Fed is approaching the rate cutting cycle," Meggyesi says.

The anticipated actions from the European Central Bank could have a far larger and more longer-lived impact on the Euro than anything the Fed is likely to do later this week. The ECB has already cut the rate it charges commercial banks to park money with it to -0.4%, reduced its lending rate to zero and spent up to €80 bn per month over the three years ending in December 2018 as part of an effort to lift inflation by stimulating economic growth.

It bought European bonds en masse, forcing down their yields, the Euro and borrowing costs for some companies in the process. But if the ECB restarts its bond-buying program, then European yields might fall even further than they already have done, which would reduce the attractiveness of the Euro in the eyes of investors. J.P. Morgan estimates that a €300 bn quantitative easing program would take 1.5 cents off the Euro-to-Dollar rate in the short-term, which would take it below the 1.10 threshold.

This is why both Nordea and J.P. Morgan have tipped the currency as a sell this week, despite the fact that the Fed is widely expected to call time Wednesday on the multi-year rate hiking cycle that helped the Dollar best so many of its rivals last year. Consensus is looking for a 25 basis point cut to take the top of the Federal Funds rate down to 2.25%.

"This reinforces the negative risk bias to our medium term forecasts (the 1Y was cut to 1.15 last week), but we defer any further changes pending the Fed as well as greater clarity on US FX policy," Meggyesi says, of the ECB's policy guidance. "The direction of travel in the euro will be determined by the lacklustre economy whereas the response of the ECB to what is already an extended downturn will influence the pace at which the exchange rate adjusts."

J.P. Morgan has advocated selling the Euro against the Japanese Yen and Swiss Franc this week and for the foreseeable future. It currently forecasts the Euro will finish the 2019 year at 1.13 and that it'll rise to 1.15 by the end of June 2020 but both these forecasts are now under review.