- Among them is a double-bottom reversal pattern and break of a trendline.

The Euro-to-Dollar rate may have formed a major bottom on the charts from which it would be likely to reverse and trend higher, according to analysts at Faraday Research, who're telling clients the down-move in the exchange rate could now be over.

Euro-to-Dollar rate charts are giving off no less than four separate signals that suggest the single currency could be on the cust of a trend change and significant move higher, Faraday Research argues in a recent note to clients.

The first signal is a double-bottom reversal pattern that's formed since the eschange rate bounced twice in short succession off the 2019 low located near to 1.1110 during the course of April and May.

Double-bottom patterns are quite reliable reversal signals. They look like the capital letter ‘W’ and when fully formed at the bottom of a downtrend, are usually good indicators that prices are soon going to start moving higher. 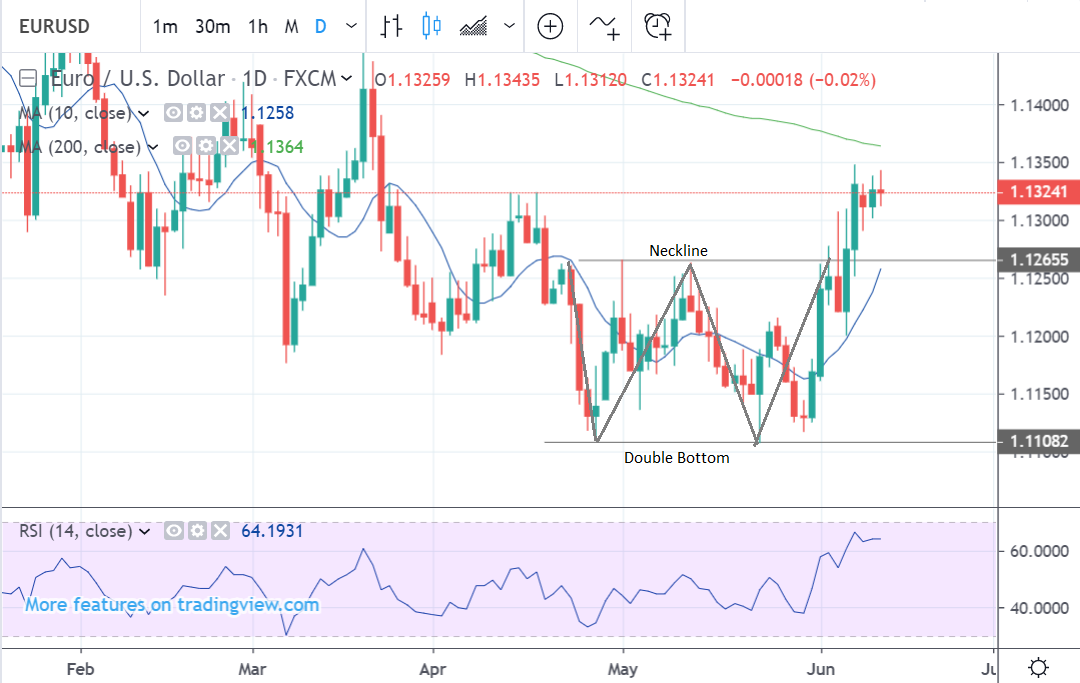 Above: Euro-to-Dollar rate chart showing double-bottom forming in April and May.

The second sign is the kind of convergence between momentum and price that's become clear on the charts since the two legs of the double bottom formed at the 1.1110 low. The relative-strength-index (RSI) fell to a new low of 34.67 when the first leg of the double-bottom formed at 1.1109 on April 26.

However, when the exchange rate fell to an even deeper low of 1.1106 on May 23, momentum failed to make a lower low as well, because the RSI registered at 46.41 instead. The non-corroboration of the second lower low in price, with a lower low in the RSI momentum indicator, is an example of convergence.

Convergence is a sign the downtrend is losing vigour and sometimes an early warning of a bullish reversal. The RSI momentum indicator compares the frequency and strength of up-days versus down-days over a set period, in this case 14 days. 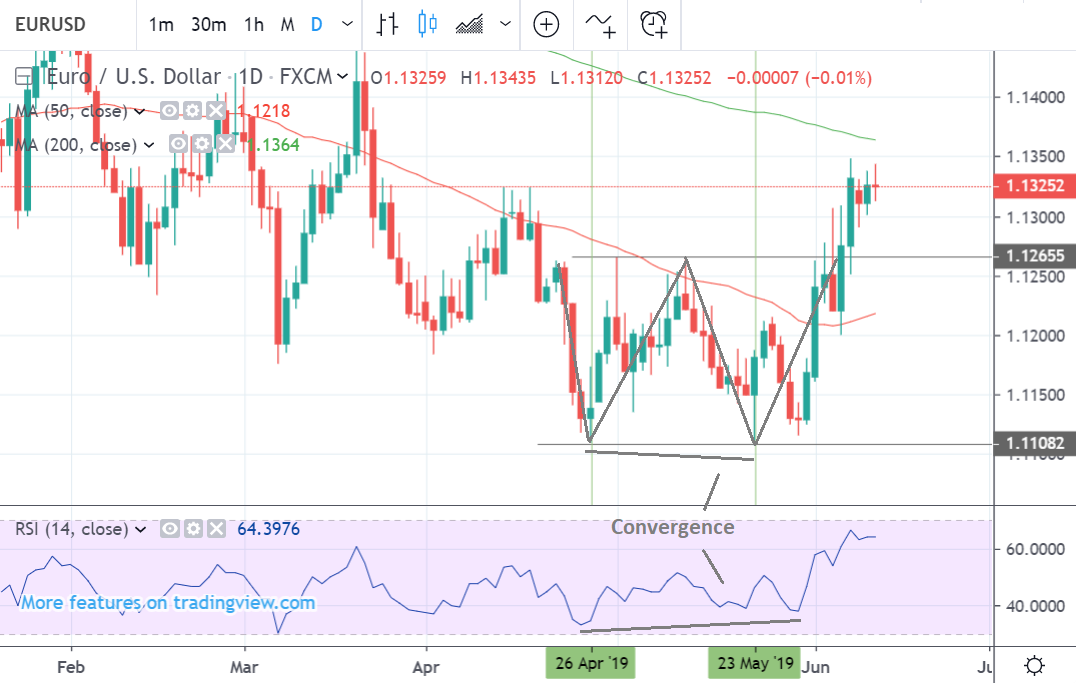 Another bullish sign is that the Euro-to-Dollar pair has rallied during the month of June, after forming the double-bottom, and set a new second-quarter high in the process. This too is a sign of an impending reversal, according to Faraday Research.

The up-move seen in June has led EUR/USD to break above a major downward-sloping trendline drawn from the January 2019 high. Prices breaking and then closing above major trendlines is also seen by technical analysts as a reversal signal. 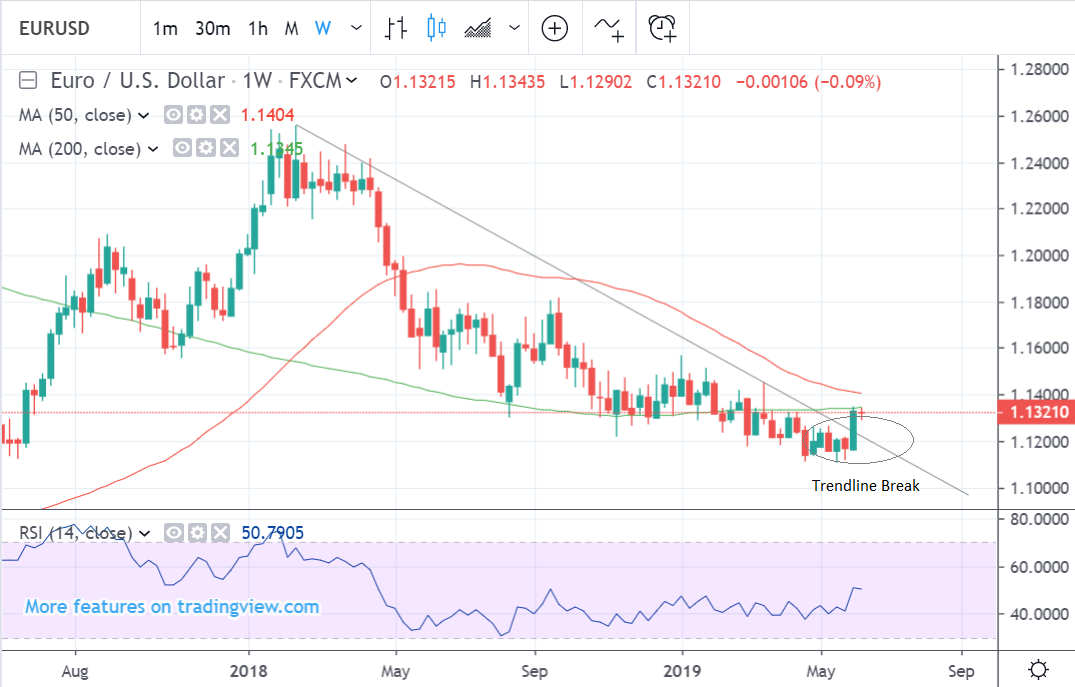 Faraday is bullish in its outlook for the Euro-to-Dollar rate but says further gains are conditional upon a break above the 200-day moving-average close to the 1.14 level. The market will retain an upside bias so long as it's above 1.1270.

However, Faraday is not the only advisory service to argue for a reversal in the EUR/USD bear trend. Analysts at LMAX Exchange, an institutional FX broker, are also flagging scope for an extended run higher based upon similar reasons to those outlined by Faraday.

Currently the two averages are only 100 points, in other words 1 cent, apart from eachother which could mean that a crossover is imminent. LMAX says a crossover would open the door for a steep climb by the Euro-to-Dollar rate, potentially as far as the 1.25 level. 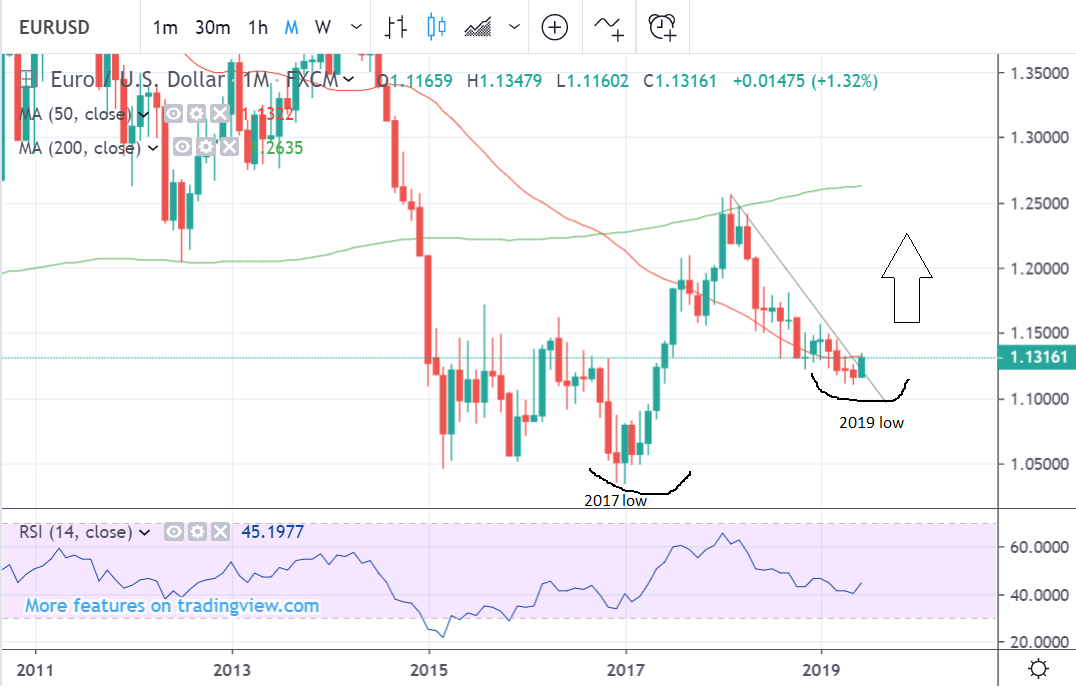 Above: Euro-to-Dollar rate shown at weekly intervals, with 10 and 20-week averages displayed.