- But such a EURUSD rise unlikely as Fed to disappoint USD bears.

The Euro has gained half a percent against the Dollar in the last week and is increasingly tipped to benefit from the U.S. greenback's anticipated decline but any steep recovery would only serve to invite European Central Bank (ECB) intervention, according to Pantheon Macroeconomics.

A Euro-to-Dollar rate recovery of the magnitute seen between June 2017 and January 2018 might please President Donald Trump, who appeared to criticise central banks on both sides of the Atlantic Tuesday for their roles in creating a "devalued" European currency.

However, another Euro renaissance would likely come as a headache for the European Central Bank because it could reduce inflation, undermining a near-decade-long fight against subpar price pressures.

This is because the Euro and other currencies are devalued against the dollar, putting the U.S. at a big disadvantage. The Fed Interest rate way too high, added to ridiculous quantitative tightening! They don’t have a clue! https://t.co/0CpnUzJqB9

"The rule of thumb is simple; a 5-to10% rise in EURUSD tends to be associated with a 0.1pp reduction in the central bank’s core CPI forecast. The June staff projections assume a EURUSD at 1.12 through 2020, which sets a value of just over 1.20 as the threshold for a downgrade in the core inflation forecast," says Claus Vistesen, chief Eurozone economist at Pantheon Macroeconomics.

Recovery for the Euro has been on the table for some months now because analysts have been forecasting a decline of the Dollar since September last year, largely because they anticipated the U.S. economy would slow as the tax cuts of 2018 began to wear off.

But speculation about a slowdown has increased in line with tensions between the U.S. and China, who're now engaged in an economic conflict where tariffs and company blacklists are the weapons of choice.

As a result, forecasts of a 2019 Euro-to-Dollar rate recovery were already widespread before last week's ECB interest rate meeting, although the single currency's appeal and predictions of upside for the exchange rate have multiplied in recent days. 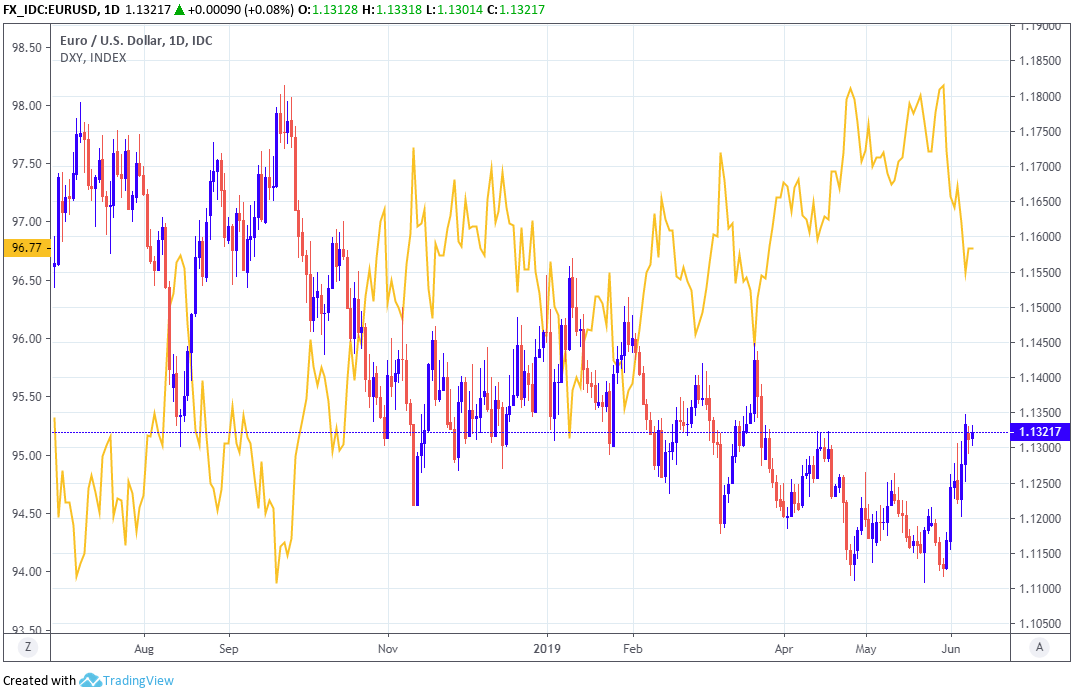 The Euro's appeal has broadened since the ECB came across less pessimistic in its outlook for the economy and interest rates than had been expected. It said rates won't rise until "through the first half of 2020" when markets were betting it would cut them by around 10 basis points over the subsequent year.

"Mr. Draghi hinted last week that the ECB would react to a sharp appreciation of the euro, which is consistent with the central bank’s historical reaction function," Vistesen writes, in a note to clients Tuesday.

Inflation is the key to what the ECB does with its interest rates next because it's obliged by law to use monetary policy in order to keep the consumer price index (CPI) at its target of "close to but below 2%".

Changes in interest rates are only normally made in response to movements in inflation, but impact currencies because of the influence they have on capital flows, which tend to move in the direction of the most advantageous or improving returns.

"It’s easy to build a narrative in which the Fed is first out of the blocks with dollar-depressing rate cuts, prompting the ECB to respond in kind, due to the strengthening euro. We are willing to play along with this story," Vistesen says. 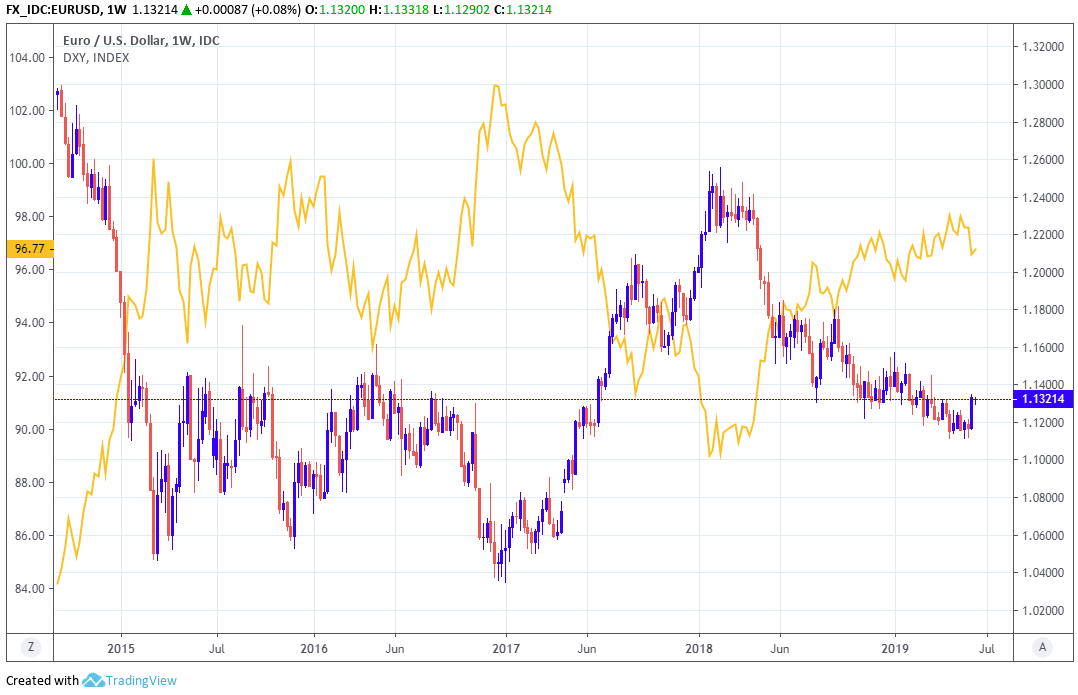 Eurozone CPI has spent very little time at or above its target since the debt crisis of 2011 and 2012 while the measure of consumer prices, the core inflation rate, has not been above 1.3% in all that time. And inflation is sensitive to changes in import costs, which are themselves at the mercy of exchange rates.

This is why a strengthening exchange rate would come as a headache for the ECB. And it's the bank's own less-than pessimistic tone last week, as well as rampant investor speculation about the possibility the Federal Reserve might cut its own rate multiple times this year, that make Euro strength likely.

The Euro has form for sudden, steep and sustained rallies in response to signs of change on the ECB front. It rose almost 10% in 2017 after the bank hinted an end to its bond-yield-crushing quantitative easing programme was in the pipeline, which led markets to conclude a rate hike might also be near.

"Such a dramatic shift in the currency markets is not our base case, mainly because we doubt that the Fed is about to deliver anything remotely resembling the cuts that markets are currently pricing-in," Vistessen says. "Our base case remains that the ECB’s policy stance will remain unchanged in the next 12 months. If the central bank moves, we think a deposit rate cut comes before more QE, with the risk tilted towards a move in Q1 [2019]."