- Euro to be driven by sentiment data; Dollar by GDP

The Euro-to-Dollar rate is trading at 1.1245 at the start of the new week after falling about half a percent in the week before.

The pair fell mainly because of economic data out of the U.S. which was surprisingly strong, especially retail sales and trade balance data. The Euro meanwhile did manage to stage a defence after the release of upbeat Chinese figures which suggests the Eurozone's export-lead slump might be about to turn around. However, the currency overall remained subdued due to ongling qualms about Eurozone growth with the latest PMIs disappointing against market expectations.

The technical picture has pivoted into bearish territory after last week's declines. 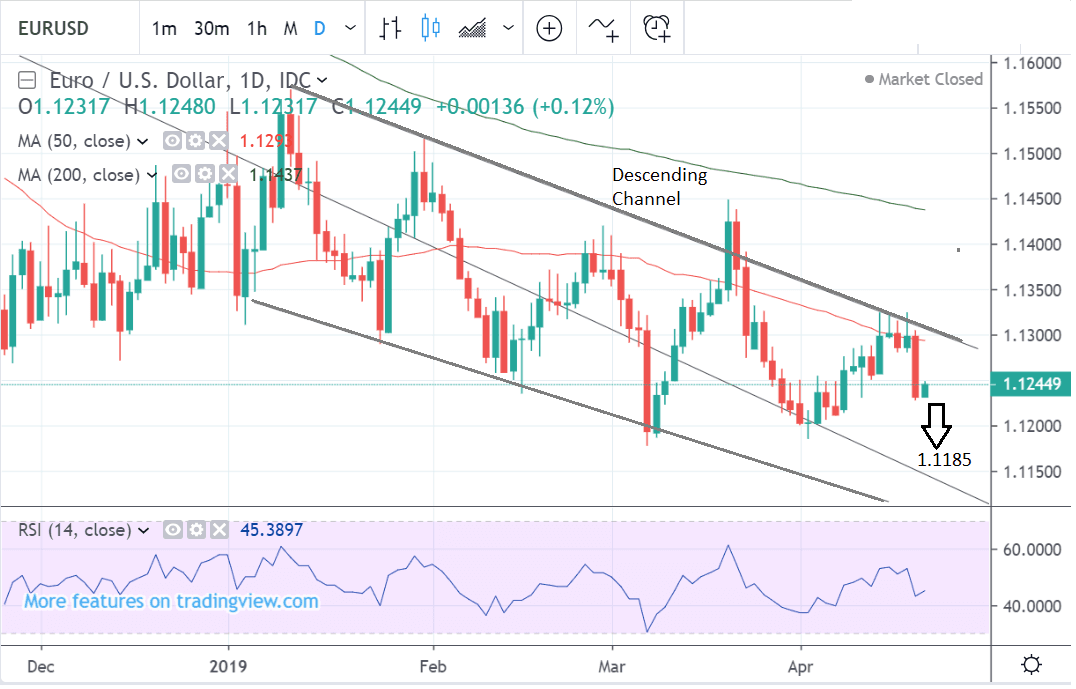 A break below the current 1.1224 lows would probably confirm an extension down towards the next target at the 1.1185 April 2 lows. This is also at about the level of a broader major multi-year trendline which is also likely to offer support.

Viewed on the 4hr time frame the most recent tranche of market action shows a sharply bearish reversal after interaction with the upper channel line. 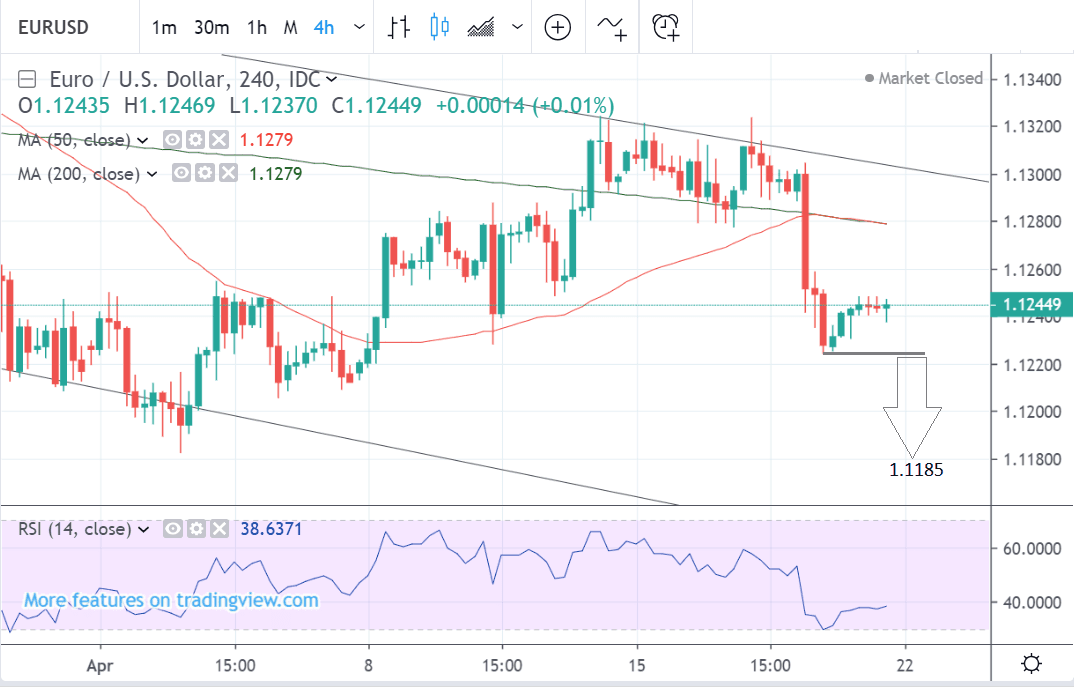 The weekly chart shows how the pair remains stuck below the 200-week moving average (MA) - a pivotal support and resistance level for the pair. This provides a tough glass ceiling limiting gains.

Whilst the pair broke above the long-term trendline, which was a bullish sign it seems to continue to act as if it is in a gentle bear trend.

Momentum, as measured by the RSI indicator, is bullish as it is converging with price action and failed to confirm the recent lows, yet this alone is insufficient to contradict the dominant bear case on the short-term timeframes.

The Ifo German business sentiment index for April is a key release in the week ahead for the single currency.

The Ifo is often viewed as a leading index for the wider economy so if it rises strongly it will often be taken as a positive sign for the Euro and can lead to gains for the currency.

Another key sentiment gauge for the Eurozone is official Eurozone consumer confidence in April, released on Monday at 15.00. This is forecast to show a balance of -7 from -7.2 previously. The balance reflects the balance of positive to negative survey responses. It can sometimes impact on the Euro if it varies from expectations dramatically. It is often a fairly accurate leading indicator of economic growth.

The overall average EU and Euro-area government debt to GDP stands at 86.8% and data out on Monday morning at 10.00 will provide an update of that figure. Debt remains a serious problem, especially for some members of the periphery. It can be a serious drag on growth since government’s have to allocate a greater and greater portion of their revenue to servicing their debt rather than infrastructure, welfare or other more growth-producing activities. 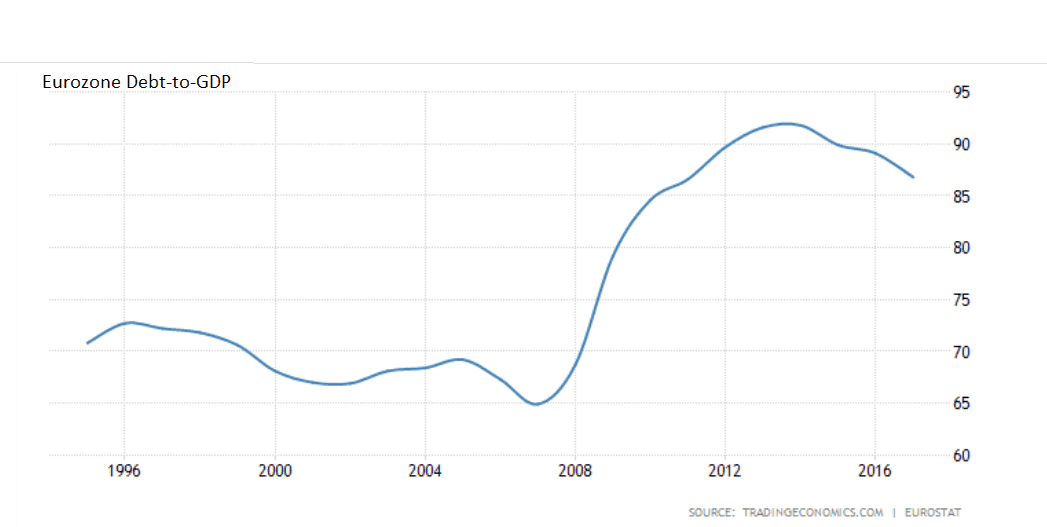 The gauge seldom impacts directly on the Euro but it can influence it over time.

Reduced growth potential weighs on the currency as it makes the region a less attractive place for international investors to invest, and this reduced demand for the currency.

The main release in the week ahead for the U.S. Dollar is Q1 GDP data. This is the preliminary estimate for growth in Q1 so it is a big deal. It is probably also the main release for financial markets as a whole, period.

Official estimates are for growth in the U.S. to have risen by an annualised 1.8% compared to the previous quarter (annualised means taking the quarter-on-quarter change and extrapolating it to reflect what it would look like over a whole year). This would be slower than the 2.2% previously.

The main risk is that the actual figure will be higher-than-expected, however, and this will start to dispel widespread notions the U.S. economy is in decline and revive the idea the Federal Reserve (Fed) might raise interest rates in 2019. Such an outcome would be beneficial for the Dollar.

U.S. data could be characterised as being mixed to improving recently so GDP could be a big deciding factor.

Over the last two weeks factory orders, inflation, retail sales, the trade balance and jobless claims all came out better than expected; whilst housing, PMIs and industrial production undershot expectations. A lot, therefore, hinges on the GDP as a sort of deciding factor to either ‘seal the deal’ on the U.S. rebound or leave the jury out.

The stronger trade data in Q1 is going to be a major positive boost to Q1 GDP.

The bank thinks the market is being overly pessimistic forecasting only a 1.8% rise, and their own economists forecast a much higher 2.6% figure, which would actually be a greater than the 2.2% of the previous quarter.

As an aside, this would also support the slight bearish tilt to the technicals now the 1.3000 level has been breached.

Other data out of the U.S is unlikely to be as market moving as GDP. It includes, Existing home sales on Monday at 15.00, which is forecast to fall by -2.3% after the very solid 11.8% gain in the previous month of February.

Housing has been one of the weaker spots in the U.S economy and data last week was not particularly positive after it showed continued declines in both housing starts and building permits despite analysts expecting the opposite.

Yet Wells Fargo is also optimistic about existing home sales, arguing that the Fed’s fairly gentle rate hike trajectory and the strong jobs market has kept mortgage applications buoyant, and therefore is likely to translate into positive sales figures.

Another major release out of the U.S. is durable goods orders which is expected to show a -1.6% fall compared to the previous month of February when it is released at 13.30 on Thursday. This partly due to a fall in Boeing 737 Max aircraft exports due to a technical fault.

This is likely to cause a drag in the data released next week. It is unlikely to affect the Dollar much, however, if it is primarily due to a single issue rather than part of an economic trend.