- EUR/USD in falling channel and expected to extend

- Signs of exhaustion could herald start of new uptrend

- Euro to be driven by ECB meeting; Dollar by inflation data

The Euro-to-Dollar rate is trading at 1.1215 at the start of the new week, virtually unchanged from the week before owing to a short-term period of consolidation.

If we take a step back however and consider the technical perspective, the outlook for the pair is marginally bearish as a short-term downtrend remains intact.

Given the old adage that ‘the trend is your friend’, we expect the pair to continue lower as it maintains a sloping channel. 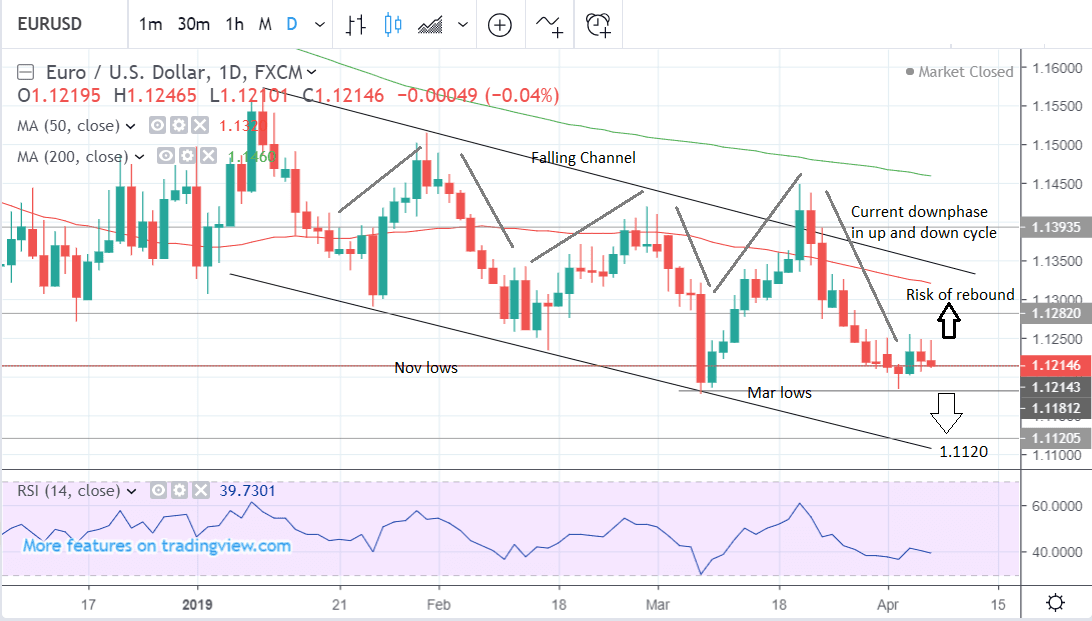 Nevertheless, there is also sense that the current downcycle leg, which began on March 21, is looking like it may have run its course and could be about to turn higher as the next upcycle begins.

We would, therefore, wish to see a clear break below the 1.1175 level for confirmation of more downside, just in case a new bullish phase is, in fact, about to start.

The pair fell past the November lows last week and almost touched the next major floor at the March lows of 1.1175 (it got as low as 1.1183). After that, it bounced off the March lows and rose for a day before gently falling back down to end the week, to end where it started.

If the pair can resume its downtrend and break below the March lows it is tipped to extend its bear channel lower to a target at 1.1120, where the S1 monthly pivot is situated. This is a level used by traders as a marker for how extended the trend is. It also tends to provide support or resistance to the exchange rate. 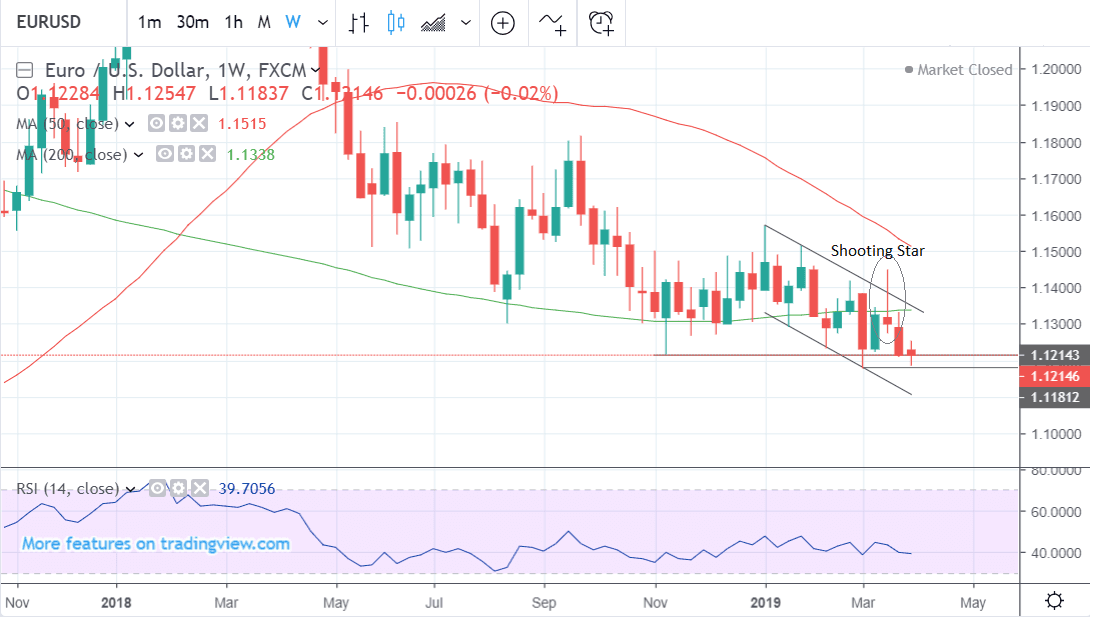 The weekly chart adds further weight to the bearish outlook. Three weeks ago a ‘shooting star’ Japanese candlestick pattern formed, which was a bearish sign for the pair.

The fact the shooting start was followed by two more bearish candles increases the chances its could be signalling a continuation lower.

Momentum, as measured by the RSI indicator, on the weekly chart, is not particularly bearishly inclined.

The fact the pair is trading beneath the 200-week moving average (MA), however, continues to be a bearish factor from a technical perspective.

The main event for the Euro in the week ahead is the meeting of the European Central Bank (ECB) on Wednesday at 12.45 BST, however, the general consensus appears to be that the ECB will keep most of its monetary policy settings unchanged.

The ECB has already put the breaks on when it foresees raising interest rates, pushing back the proposed rate first rate hike to the end of 2019 when previously it had anticipated a hike after the summer of 2019. There is a risk this could be extended even further until the end of Q1 2020, because the minutes showed some of the more dovish members calling for that at the March meeting, however, it's more likely that if the ECB is going to do this it will wait until June, when the Bank releases its new forecasts.

In March the ECB announced it was relaunching TLTROs, which are cheap loans to help support financial institutions (FI). This is unlikely to undergo revision. The new TLTROs (Mrk 3) are scheduled to begin in September 2019. It is taken as a form of de facto easing by the market.

A new idea raised at the March meeting which could be further discussed by the ECB is a ‘tiered rate deposit system’ which consists of the ECB setting a variable deposit rate depending on the health of of the FI.

The scheme was touted as a way to lessen the impact of ultra low deposit rates on bank profitability. Yet, despite being discussed the governing council did not seem able to decide on a way forward and the there are many issues surrounding implementation, including the problem of ‘good banks’ being unfairly punished by a negative deposit rate. The market may well be eying any mention of this in the statement. Yet, it may have more impact on European banking shares than the Euro.

On the 'hard data' front, industrial production data is expected to show a -0.6% drop in February, when it is released on Friday at 10.00 BST. It is a key release as it is an important contributing factor to growth, and growth impacts on GDP, which affects inbound investment and capital flows and therefore demand for, and the value of, the Euro.

German trade data out on Monday morning at 7.00 is also important to gauging the health of the Eurozone economy, especially because of the recent slowdown in exports, which has been one of the contributing factors to the recent slowdown experienced by the German economy.

Probably the most important release for the U.S. Dollar is the first estimate of inflation data in March, which is released at 13.30 BST on Wednesday, April 10.

Inflation affects the level at which central banks set base interest rates and this in turn impacts on the currency by affecting capital flows.

The market currently expects the Federal Reserve (Fed) to cut interest rates in the future and this is keeping downward pressure on the Dollar, however, if inflation rises strongly it could change these expectations and lead to a U.S. Dollar recovery.

Linked to this is another important release in the week ahead, the FOMC minutes.

These are the minutes from the Fed’s previous meeting and reveal the deliberation of the Fed’s policy team, whilst they are discussing what to do with interest rates. It can sometimes shed light on current Fed thinking and the future trajectory of interest rates so it tends to be an important release for the FX and rates market.

We believe the Fed has reason to strike a more optimistic tone on the outlook than has been the case in recent policy decisions, largely owing to the pick-up in economic data we have seen over recent days.

Friday's employment market numbers were encouraging in that they revealed a sharp pick up in employment when compared to the disappointing February data.

In short, the U.S. economy continues to hum along nicely and concerns of an impending recession appear premature.

Concerns the Fed's next move on interest rates would be a cut look misplaced, and should the market start pricing in further interest rate rises we could well see the Dollar push higher.

Another key release is factory orders out at 15.00 on Monday. It is currently forecast to show a -0.6% drop in orders in February, compared to the 0.1% in January.