This represents the worst monthly drop since January 2017.

Demand from non-Eurozone trading partners plummeted by 6%, suggesting to us that a sharp drop in demand for German-made goods by a Brexit-strung UK continues to be felt. We reported in January investment bank analysts are finding falling demand from a cautious UK could be behind a sharp slowdown in Eurozone economic activity.

An ongoing plunge in exports to Turkey is also widely cited as a contributing to the downturn.

And, initial reactions from the analyst community to today's German industrial data suggest there could be further pain to come with that pain potentially spreading into other areas of the economy.

"The industrial recession in Germany is still deepening," says Florian Hense, economist with Berenberg Bank in London. "Sentiment survey export orders suggest that the worst is not over yet as these surveys recorded the worst falls since 2009." 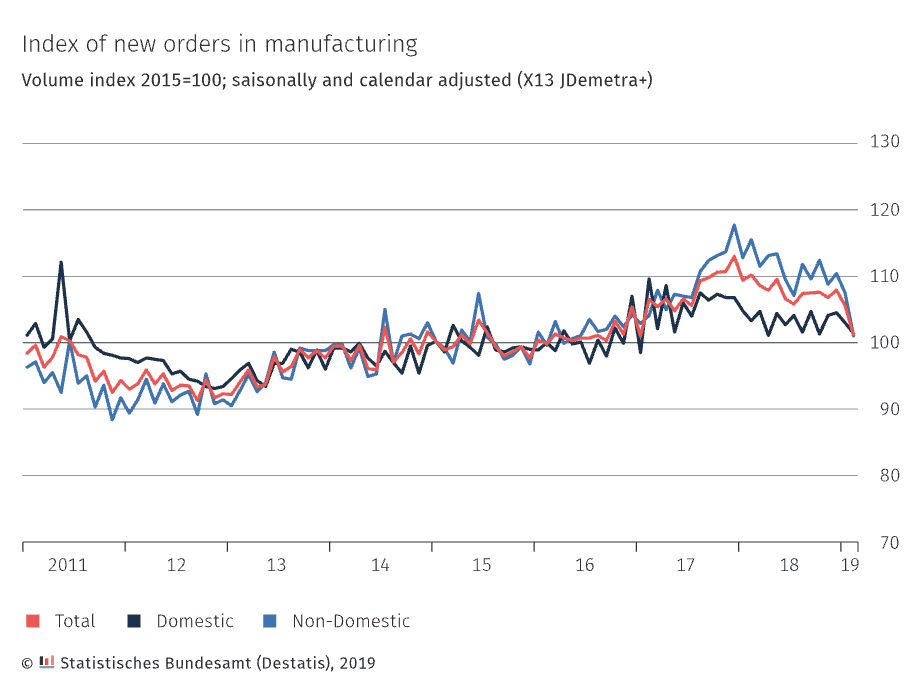 Looking at the surveys, which tend to be more timely than official data, we see PMI new orders recorded their worst falls since 2009. ESI export orders are at their weakest level since autumn 2016.

While German industry is in recession, the services sector has performed better than many economists had expected, and this should provide some support going forward.

However, questions are being asked as to whether the downturn in industry will soon spread to other sectors of the economy. "Healthier internal demand may prove insufficient to offset lost global demand and confidence amid US-China trade wars, the risk of US tariffs on EU-made cars, Brexit or the global growth weakness," says Radu-Gabriel Cristea, an economist with Barclays.

"Consumption benefits from rising incomes and a resilient labour market. If the industrial recession deepens for much longer, service providers will start to suffer soon, too," says Hense.

According to Hense, "the prospects for GDP growth in Q1 and early Q2 look grim," based on the most recent industrial figures.

The risks to Berenberg's call of 0.2% quarter-on-quarter growth in Q1 and Q2 "remain clearly titled to the downside," says Hense.

Berenberg's forecast for German GDP growth in 2019 is 0.7%."Industrial Recession in Germany is Still Deepening"

Barclays are meanwhile looking for the German economy to undergo a turnaround towards mid-year, when global factors become increasingly supportive.

"On the upside, China credit stimulus and a Sino-US trade agreement should help, while strong fiscal stimulus (German fiscal outlook: Unlocking the vault, 22 March), coupled with additional monetary accommodation from the ECB, should provide a further boost. Therefore, we continue to project that German growth will pick up by the middle of the year," says Cristea.