- 'No deal' Brexit would exacerbate situation in 2019

Economists at Italy's UniCredit have sifted through Eurozone trade and GDP data and determined that a slump in exports to Turkey and the UK are the prime culprits behind the Eurozone's dramatic slowdown in economic growth over recent months, suggesting notable risks to the monetary area's economic growth potential in 2019 in the event of a 'no deal' Brexit transpiring.

Eurozone GDP growth fell to 0.3% quarter-on-quarter in the first three quarters of 2018, less than half the rate experienced in 2017. Estimates from UniCredit suggest a 0.2% growth rate will be recorded in the final quarter 2018.

The slowdown will reflect the notable loss of growth momentum in Germany which contracted in the third quarter and estimates suggest it will record 0% growth, a mere -0.1% miss to the downside will therefore see the economy fall into recession. Italy meanwhile appears to have almost certainly entered recession while recent French industrial production data was described by one analyst as being a complete "write off". 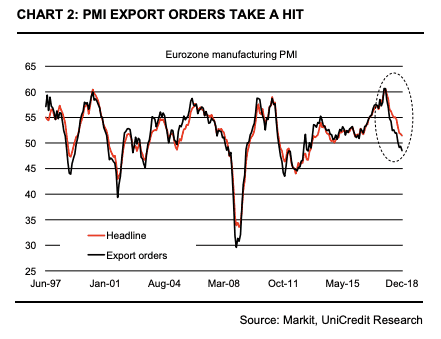 Determining the cause of the declines is important. Economists have had time to mull over the data and UniCredit's Marco Valli, Head of Macro Research in the bank's Milan headquarters, says temporary factors alone cannot alone be blamed for the slowdown in Eurozone growth.

Pronounced weakness in the German car industry and protests in France and political uncertainty in Italy are potential temporary factors, but UniCredit's research shows that, "for the most part, the deceleration in euro area growth appears genuine."

"The underperformance of indicators of foreign trade at a time when domestic demand is slowing, but remains reasonably resilient, suggests that external factors have been the main source of weakness," says Valli. 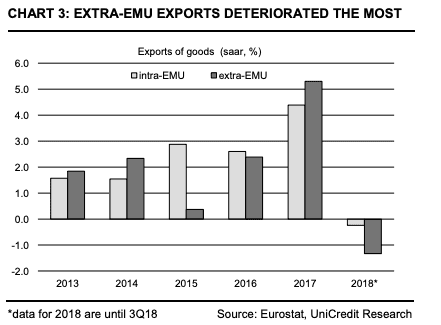 Valli's research shows that weakness in exports has mainly reflected a softening in demand from outside the Eurozone. The U.S.-China trade spat, and slowing Chinese growth would be the first culprit that comes to mind, but data doesn't support this.

In fact, it is Turkey and the UK that account for the notable slowdown in Eurozone exports, and thus broader economic growth. Turkey has seen a notable economic weakness after a curreny crisis rippled through the economy six months ago, while signs of shifting patterns in UK demand ahead of Brexit appear to be behind a decline in UK. Recent Markit PMI surveys suggest a shifting of demand towards domesticaly-produced goods and away from imports by manufacturers,

"The severity of the slowdown in eurozone exports in 2018 was surprising not only when compared to earlier expectations," says Valli. "Despite accounting for only about 3% of total extra-euro area exports, Turkey stands out as the main drag, followed by the UK." 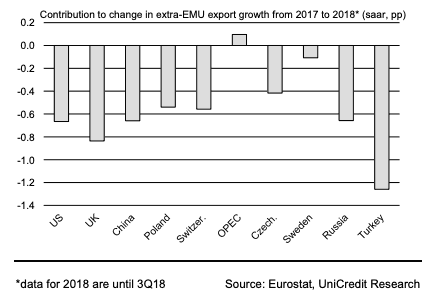 The UK accounts for about 13% of exports heading out of the Eurozone.

The UK and Turkey account for about a third of the difference in the growth rates of extra-Eurozone exports between 2017 and 2018.

"Interestingly, China does not emerge as a key source of weakness," says Valli.

Valli's research shows Brexit is the likely culprit behind the slowdown in Eurozone exports to the UK and poses a potential headwind going forward.

The UK is the Eurozone’s second largest export destination after the U.S. and "is a more likely candidate for intensification of economic weakness in the short term as Brexit uncertainty approaches its peak," says Valli.

Valli expects an easing in the uncertainty over Brexit to allow for a rebound in UK-destined exports, with strategists at UniCredit saying they expect Brexit uncertainty to be negated by the successful passing of Theresa May's Brexit deal on a second, or third attempt.

This should discount the prospect of a disorderly 'no deal' Brexit.

However, if 'no deal' does happen then the UK could well become a source of Eurozone export growth disappointment in 2019 which will in turn, based on the evidence of this research, place notable downside pressures on the Eurozone economy.