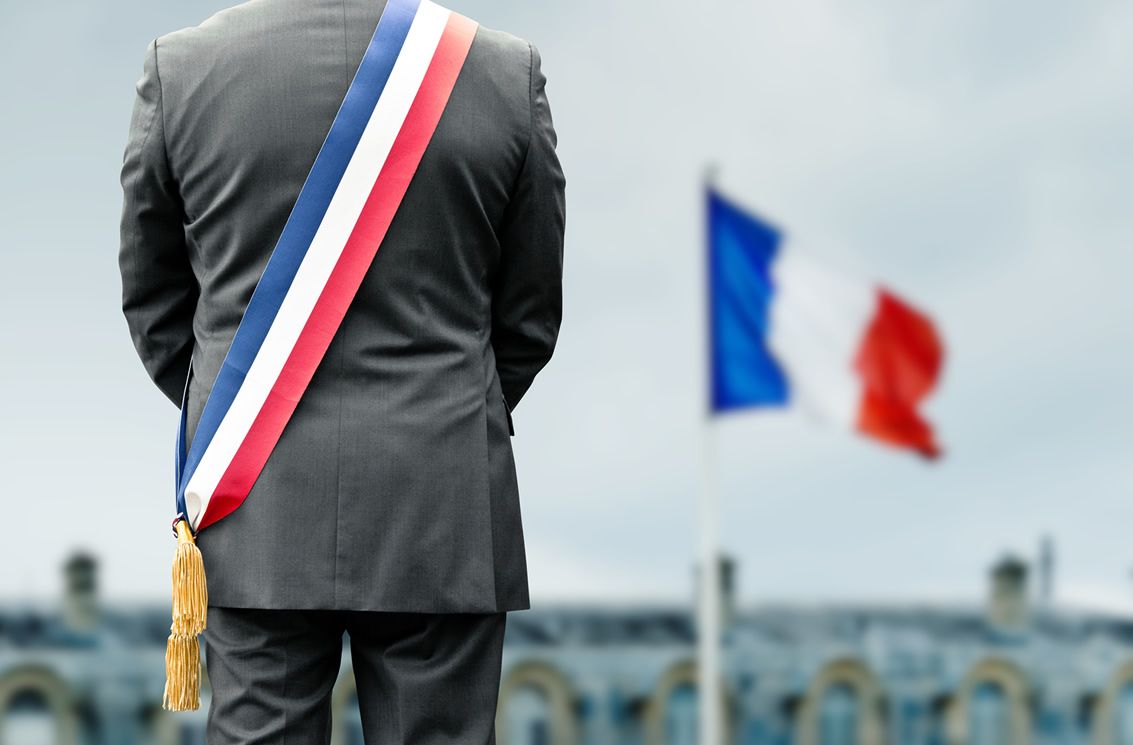 - Economists say 2019 growth to fall by half and ECB will not raise rates.

- Will miss global hiking cycle and is now becoming like Bank of Japan.

French industrial production out Thursday has served to aggravate concerns about the health of the Eurozone economy, with some economists now warning the European Central Bank (ECB) will not get the chance to raise its interest rate in in 2019.

French industrial production fell by -1.3% during November when markets had looked for it to hold steady at its earlier level, with no growth at all rather than a contraction, leading one economist to claim the final quarter was a write-off for the industrial sector.

"In one line: Q4 was a write-off for French manufacturers," says Claus Vistesen, chief Eurozone economist at Pantheon Macroeconomics. "Unfortunately we don’t expect much of a rebound in the December report given that the “yellow vests” strikes intensified in the final month of last year, further disrupting distribution of key production inputs and supply chains."

Vistesen says markets should continue to take the data in their stride because it merely confirms what investors already knew; the final quarter was a horrible one for French manufacturers. Consensus is that the quarter was bad for the entire French and Eurozone economies too.

Machinery and equipment goods makers saw some of the biggest and most impactual falls in output during the month, although declines were felt across most categories, with construction and transport equipment manufacturers the only real bright spots.

"Industrial production came in much weaker than expected in November, pointing to a significantly negative contribution of IP to 4Q18 GDP growth. This increases the likelihood of a further deceleration of GDP growth in 4Q18 after 0.3% qoq growth in 3Q18," says Tulia Bucco, an economist at UniCredit Bank.

Recent data is defying forecasts from the European Central Bank for a pick-up in growth early this year, and could force policymakers to keep interest rates at record lows for longer.

This is important for the Euro's outlook the currency's ecent appeal to investors has been hinged on the idea the ECB will begin raising its interest rate once "through the summer of 2019".

"Eurozone data remains dreadful," says Daragh Maher at HSBC. "The ECB meeting on 24 January could be a problematic one for President Draghi given his previous forecasts of a bounce in activity which is once again failing to materialise, and core inflation still languishing near zero."

Thursday's data comes hard on the heels of similar figures from Destatis that showed output from Germany's industrial sector also declining sharply during the same month.

The latest numbers for German industrial production suggest the manufacturing sector is most likely heading for recession in Q4 2018. "Eurozone confidence continues to fall. The pressure on the ECB to change its guidance regarding a likely normalization of policy in 2019 is mounting," says Maher.

HSBC is bearish on the Euro as a result, with Maher saying; "We simply struggle to find reasons to be bullish the EUR at this juncture, tactically or on a more medium-term view."

Economists at Capital Economics are now forecasting Eurozone growth will fall by half this year and the ECB will now not get the chance to raise interest rates in the current economic cycle.

"We are revising our forecasts for economic growth in the euro-zone and now expect GDP to increase by only 1% this year and a bit less in 2020," says Andrew Kenningham of Capital Economics. "The ECB is unlikely to raise policy rates at all this year or next, and will thus miss out entirely on the global tightening cycle."

Kenningham says this will leave the ECB in danger of becoming like the Bank of Japan, which has not raised its interest rate since 2007 and has been forced into ever more extreme and unconventional forms of monetary policy over recent years.

In order for the ECB to raise rates from their record low levels, the growth outlook must be and remain consistent with a gradual return of the consumer price index toward its target of "close to but below 2%".

"Weaker economic growth is in turn likely to depress underlying inflation. The headline rate for the eurozone is set to drop this year due to the past fall in oil prices. And more importantly, we think core inflation will remain very low," Kenningham writes, in a note to clients Wednesday.

Eurozone inflation fell sharply in December, from a downwardly-revised 1.9% to just 1.6% when markets had looked for a retreat from the previously published number of 2% to 1.8%. Core inflation was unchanged at 1% in December.

The U.S.-China "trade war" also weighed on French and German industrial activity in November amidst fears were that President Donald Trump would raise the 10% tariff rate imposed on $250 billion of Chinese exports to the U.S. each year and target its remaining U.S.-bound trade with new levies.

This is a problem for Europe, particularly Germany, given the extent of interdependency between European and Chinese manufacturers. A 90-day detente, which is set to end of March 01, was struck at November's meeting.

However, China said Thursday that efforts to secure a deal are yielding progress, aiding the Euro higher. That is a positive development for the outlook, even if a tariff increase and extension in March cannot yet be ruled out. 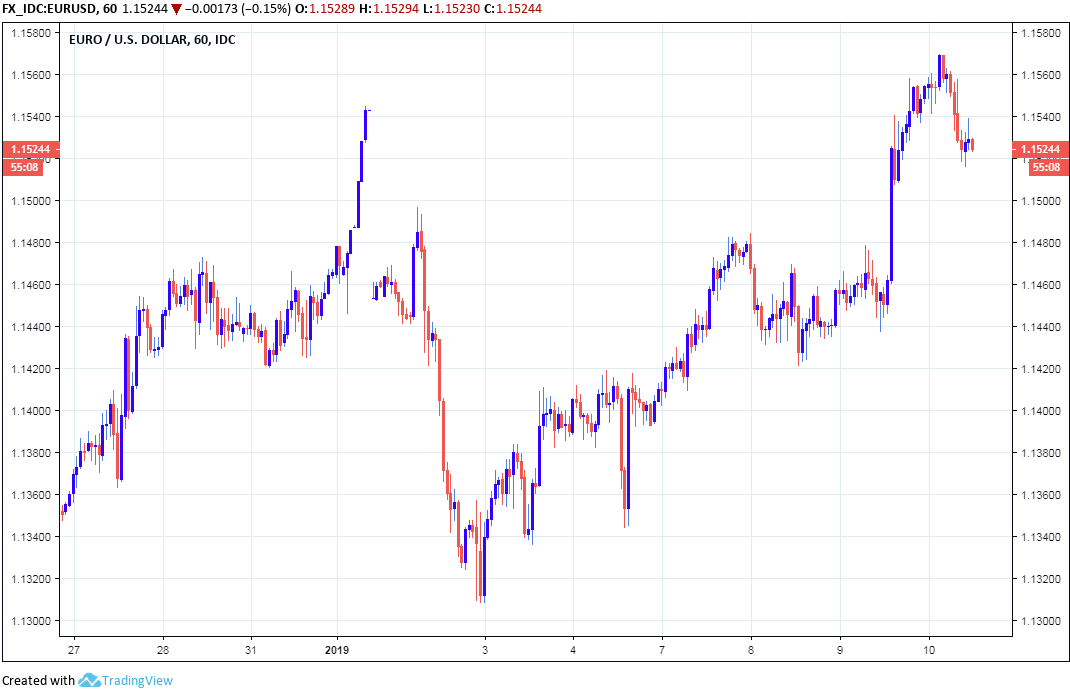 "EUR/USD has broken out of its 1.13-1.15 range, a move which came as the USD/CNH rate fell and just before the end of trade talks was confirmed. The Euro's only independent sources of strength are valuation (against the Dollar, not in trade-weighted terms), and positioning," says Kit Juckes, chief FX strategist at Societe Generale.

Juckes says it took a long time for the Euro to recover above the 1.15 threshold and that it could take equally as long for it to get above 1.16 given the EUR/USD's strong negative correlation with the USD/CNY rate. 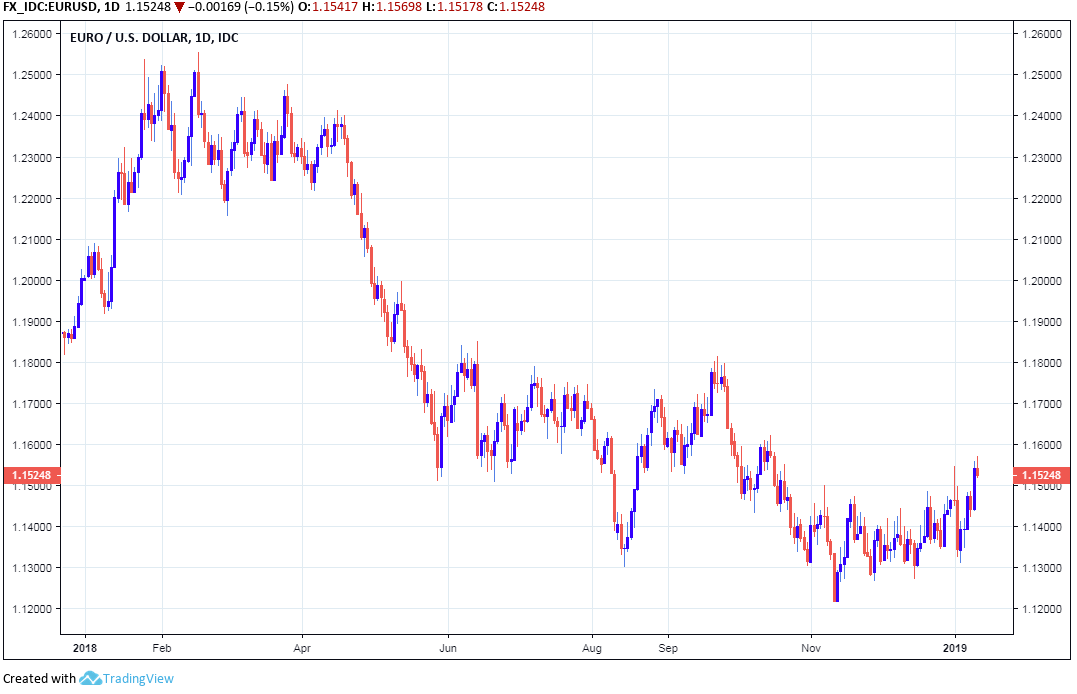