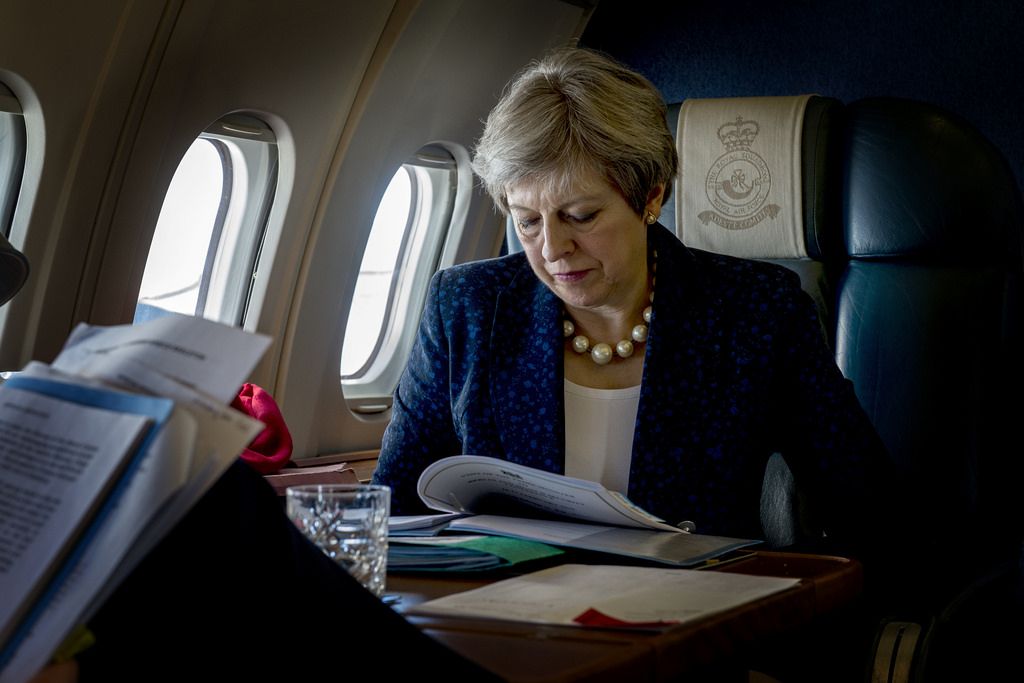 Theresa May makes comments on a 'no deal' Brexit en route to Africa. Image by Jay Allen © Crown Copyright

- May confident UK will successfully endure 'no deal' Brexit outcome

- British Pound continues to absorb market fears of such an outcome

- But risk-reward does not favour chasing Sterling any lower

Pound Sterling has hit fresh 11-month lows against the Euro over the course of the past 24 hours at 1.0990 with markets focussing on Prime Minister Theresa May's candid comments on a 'no deal' Brexit while on her Africa tour, saying such an outcome will not be "the end of the world."

May says adds the U.K. can still make a success of Brexit if it tumbles out of the European Union without a deal.

The comments encouraged markets to further pare back exposure to the Pound and extend a sell-off that has been in place since April.

"He said about a no-deal situation that it would not be a walk in the park, but it wouldn’t be the end of the world," May said, referring to Azevedo. "I’ve said right from the beginning that no deal is better than a bad deal."

The Pound-to-Euro exchange rate is quoted at 1.1026 on the inter-bank market, its lowest level since September 12, 2017 which fulfils our warnings made over the weekend that such a development was likely.

The rates on offer for international payments at UK high-street banks are found in a 1.0640-1.0720 bracket while independent specialists are seen offering rates towards 1.0960.

The Pound continues to absorb a risk premium from markets who are increasingly wary that the UK and EU will be unable to achieve a Brexit deal.

Indeed, the government is "putting in place the preparations such that if we’re in that situation, we can make a success of it," May said.

However, there is also a growing opinion in some quarters that pessimism towards Sterling over the 'no deal' matter is reaching extremes.

May reiterates again that she still thinks Britain will be able to get a "good deal" - clearly the Government is working hard at achieving a deal and noting the EU's preferred 'modus operandi' when negotiating, they will agree to a last minute deal.

"Risk-reward may no longer favour chasing the Pound much lower from these levels," warns analyst Viraj Patel with ING Bank N.V. "We think GBP/USD at 1.27 (and EUR/GBP at 0.91) reflects a good chunk of Brexit negativity – and look for a stable, yet volatile, GBP."

"Some investors may have found comfort from the Raab-Barnier press conference over the past week – especially as it was clear that the EU isn’t actively looking to push the UK off any Brexit cliff edge," adds Patel.

Brexit negotiations are now ongoing with the EU and UK pushing the pace of negotiations in order to achieve a deal.

We are therefore looking to Brussels through the course of Tuesday for signs that Raab and Barnier will update markets with the latest developments. Going forward, we reckon any outsized moves will likely be higher as markets are not prepared for any positive announcements.