- GBP/EUR firms but remains vulnerable so long as it is below channel.

- Employment, inflation data due for GBP, with GDP, CPI and ZEW for EUR.

The Pound-to-Euro exchange rate starts the new weekat 1.12; well off the lows suffered in the previous week that saw the pair reach 1.1070.

The recovery comes amidst the belief the Pound was oversold below 1.11 and widespread selling of Euros owing to negative developments in Turkey. "Sterling is actually outperforming the Euro as the UK is seen as less exposed to Turkey. Technically, the EURGBP rally looks nearly reversed here," says John Hardy, a foreign exchange strategist with Saxo Bank.

Pound Sterling is also better bid amidst rumours the European Council are preparing to offer concessions to the UK which might improve the chances of a deal being brokered before Brexit.

The combination of these fundamental factors halted GBP/EUR's downward spiral and led to a rebound from the 1.1070 lows to a weekly close of 1.1184.

However, the technical picture suggests the potential for a reversal without sufficient confirmation quite yet.

The weekly chart below, for example, shows that the pair has formed a hammer candlestick pattern which indicates the possibility last week's lows formed a bottom, but for hammer's to have any real value as trend reversal indicators, they require conformation in the form a of an up-candle in the subsequent period. For the hammer to gain credence, therefore, the coming week needs to be positive. If it is, then we will have the basis for making a strong recommendation the market will go substantially higher. 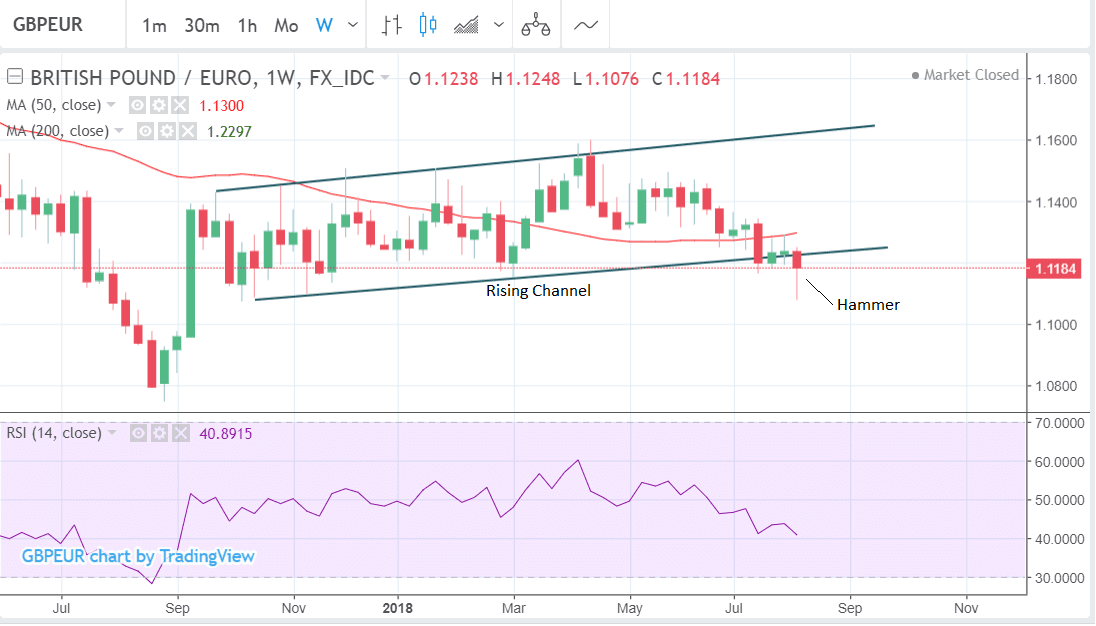 The weekly chart also shows that the pair remains below its long-term channel and this means it remains vulnerable. The exchange rate never quite made it to the minimum downside target for the channel breakout at 1.1025, and as long as it remains below the lower channel line there is a risk it could start going lower again to 'finish the job'.

Momentum, measured by the RSI indicator in the lower pane, is still bearishly inclined. It is  at levels not witnessed since 2017 when the exchange rate was below 1.10. It is not particularly supporting a reversal higher.

The daily chart (below) shows more clearly that despite the rebound on Friday the pair remains below the bottom of the channel and, therefore, vulnerable.

Yet RSI is more bullish on the daily after having plunged below the 30 oversold level and then promptly broken back above it. This is a clear signal for traders to close short trades and open longs and does support the idea the pair is reversing higher. the 'V' shape of the RSI is also a common reversal characteristic. 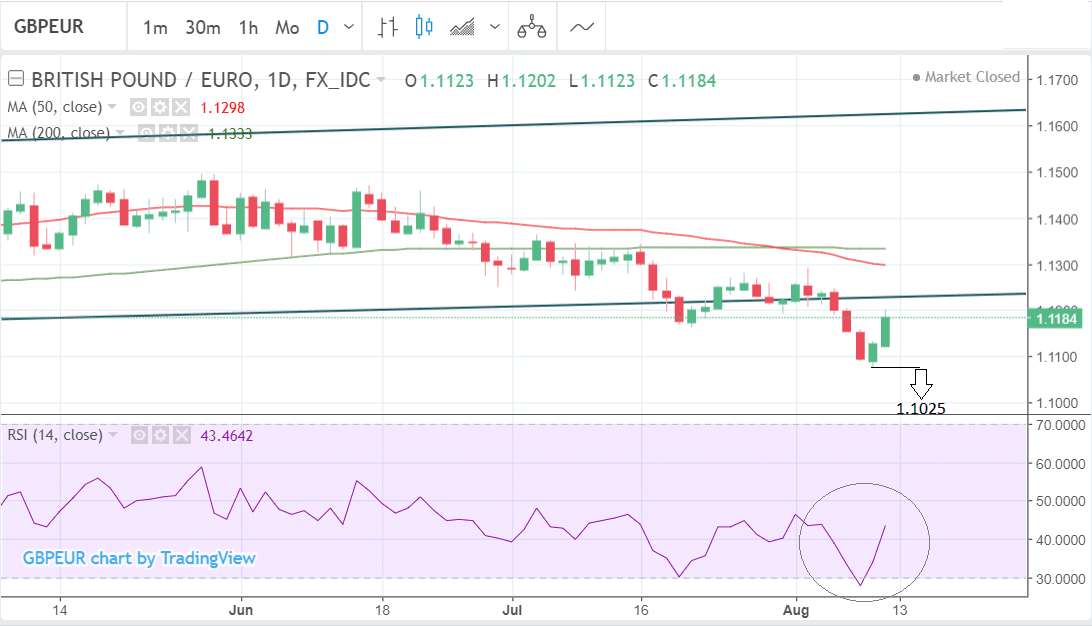 The force of the rebound is also suggestive of a more substantial recovery unfolding, yet until it breaks back above the lower channel line at about 1.1225 the exchange rate remains vulnerable to capitulation, and the move higher may simply be a 'throwback' before a resumption of the broader downtrend.

The 50-day moving average (MA) has crossed below the 200-day MA which is a bearish sign, although not convincingly so, owing to the fact the 200-day is not clearly declining at the same time, but rather fluctuating higher and lower. If it were more definitely declining the bearishness of the signal would be enhanced and it would qualify as a death cross - sadly it is not quite a complete death cross as it is - rather an imperfect one.

The four hour chart shows the pair rebounding quite strongly and is the most bullishly suggestive of all the charts yet also, still, technically too immature to really seal the deal on a bullish recovery.

The chart shows the pair rebounded strongly from the 1.1070 lows and has risen up in broadly three waves. The recovery is steep and strong, which is a positive sign and recommends a continuation higher, however, because it has only really formed three distinct waves in a zig-zag 'abc' format, there is also still the possibility it could just be a forceful abc correction of the downtrend and the market may resume falling from here now the abc looks complete. 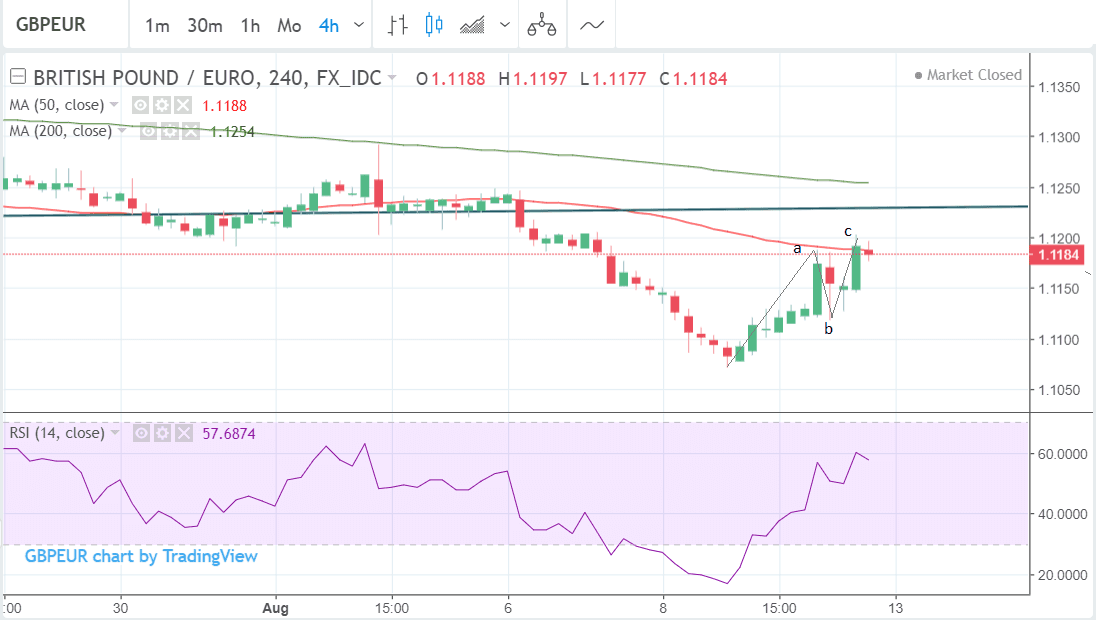 The real test will probably come on Monday when the market makes its opening moves. If the pair forms another higher high and higher low, making two sets, GBP/EUR will have made the first really strong indication of a bullish short-term reversal.

The look and feel of the chart supports this more than a resumption of the downtrend - it looks more 'right' for the pair to continue rising than to start falling after such a strong start.

Overall, despite the various bullish signs we remain marginally bearish and a break below the 1.1076 lows would lead to a move down to a target at 1.1025, which equates to the height of the channel by a ratio of 0.618, extrapolated lower from the breakpoint, the standard method for establishing breakout targets.

Sterling: What to Watch this Week

Brexit headlines could be on tap over the next week with EU/UK negotiations resuming on Monday and recent media stories have reported a conditional willingness on the part of EU leaders to accept Theresa May’s plan to aim for a free trade zone in goods, which could be discussed at a special EU Summit in Salzburg next month.

We note this to be one reason why downside damage to Sterling could have been worse.

"This could help to stem further Sterling selling pressure," says George Brown, an analyst with Investec.

We will keep an eye out for any media set-pieces from the main negotiators.

On the calendar, the Pound has three main data releases in the week ahead, the first of which is wage and employment data for July, out on Tuesday, August 14 at 9.30 B.S.T.

Current expectations are for average earnings to come out at 2.5% - the same as in June; and for the unemployment rate to also remain the same at 4.2%.

"If inflation turns out to be more robust than expected, then this will fuel speculation over further rate hikes from the Bank of England," says a note from brokers Actionforex.

The inference is that this could also support the Pound since higher interest rates tend to increase foreign capital inflows due to the higher return promised.

"Inflation may rise more sharply in the coming months as the weakness in the exchange rate will likely push up import costs. If the pound’s weakness persistence then in the long-term this should help to boost exports, assuming Britain will strike a good deal with the EU. So whichever way you look at it, sterling will probably make a good comeback in the longer term outlook," add Actionforex.

The final major release for the Pound is retail sales in July out on Thursday, also at 9.30.

Broad, headline retail sales are forecast to show a 2.9% rise compared to a year ago and 0.2% compared to the previous month of June (month-on-month).

Core retail sales, which excludes auto sales and fuel is forecast to rise 2.8% on a yearly basis and 0.2% month-on-month.

Despite the important data on schedule in the week ahead its important to note that broader political and macro themes may be more dominant.

The Pound shrugged off a recent interest rate hike by the Bank of England and fell on Brexit fears anyway, and on Friday it was more moved by Turkish themes than domestic data which was positive, as macro themes dominated its main counterparts and somewhat overshadowed the data.

The data had little impact on Sterling which was instead focussed on external drivers like broad-based Dollar strength and the Euro's Turkish-generated woes.

Probably the most important factor for the Euro in the week ahead will be how the Turkey drama pans out - will it end with a feast and 'goodwill to all men' or the proverbial 'shoot'.

The Euro sank on Friday after the Lira lost yet over 15% of value taking its overall damage toll to 35% since the start of the year, amidst fears raised by the European banking watchdog about the exposure of European banks, especially those in Spain, France and Italy to Turkish debt. 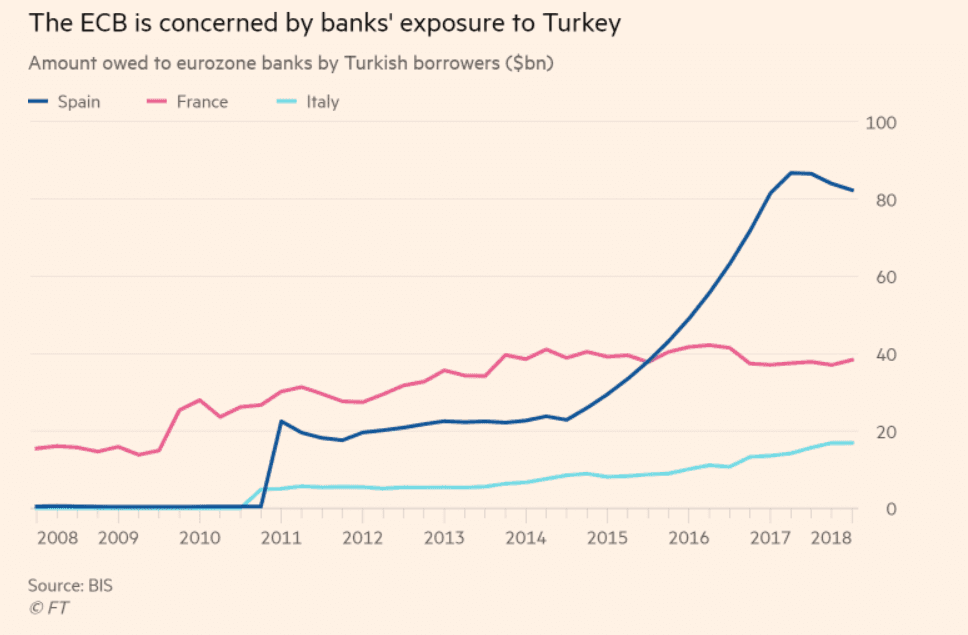 Image courtesy of the Financial Times

The European Supervisor Mechanism, the body set up by the European Central Bank (ECB) to oversea the stability of Europe's biggest banks does not, "yet view the situation as critical. But it sees Spain’s BBVA, Italy’s UniCredit and France’s BNP Paribas, which all have significant operations in Turkey, as particularly exposed, according to two people familiar with the matter," say Claire Jones, Ayla Jean Yackley and Martin Arnold, all correspondents for the Financial Times.

The Euro weakened as fresh contagion concerns led investors to speculate the ECB may slowdown its tightening programme -  a move which would be negative for the currency.

The ECB is concerned borrowers may not be hedged against the weak Lira.

Turkey's own banks are also exposed and in a recent note by Goldman Sachs a move to 7.10 in the USD/TRY would largely erode all their excess capital, raising the possibility of Turkey's banks going under.

So there is large risk from Turkey, but what of hard data releases in the region?

There are no major flash estimates out in the week ahead but there are revisions to Q2 GDP and Inflation, and the ZEW economic sentiment survey, which often provides a leading indicator for the trajectory of the larger Eurozone economy.

On Tuesday the 2nd estimate for Q2 Euro-area GDP is expected to show the region grew by a slightly slower 0.3% in second quarter compared to the 0.4% of the first estimate on a quarter-on-quarter basis, when it is released at 10.00 B.S.T.

This is expected to translate into a slower 2.1% rise on an annualised basis from 2.5% previously.

Slower growth in line with these revisions could weigh on the Euro.

The final estimate for inflation in July is forecast to show a -0.3% fall from 0.1% in the previous estimate, when it is released at 10.00 on Friday, August 17.

The yearly figure is expected to show a higher 2.1% rise from 2.0% previous estimate.

Core inflation is forecast to be revised up to 1.1% from 0.9% previously.

The Eurozone Current Account is forecast to show a reduction in the surplus to 4.6bn in June when it is released at 9.00 on Friday, from a 36bn surplus previously.

The ZEW economic sentiment index is forecast to show a -16.4 result from -18.7 in the previous month. The survey asks financial professionals for their opinion on the outlook for the Eurozone economy. A deeper decline might weigh on the single currency as this highly respected survey is taken quite seriously as a barometer by the markets.